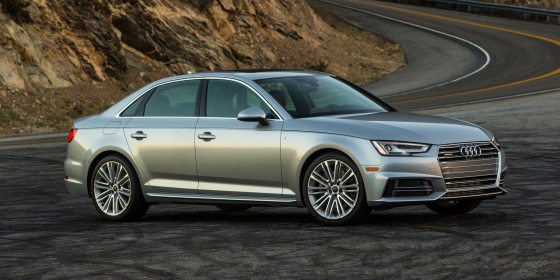 The Audi A4 has long been the darkhorse of the compact luxury car segment. It squares up against heavyweights such as the BMW 3 Series, Mercedes-Benz C Class, and Lexus IS. Thanks to a recent redesign and the awesomeness of its quattro all-wheel drive powertrain, though, the 2017 Audi A4 may very well be setting the standard by which these competitors will be judged in the future. 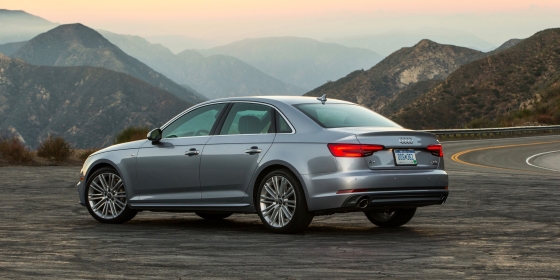 Audi design in recent years has been understated, clean, and easily identifiable as befitting a premium product. Little elements make the difference between this and a more common compact sedan — the crispness of the LED taillights, the elegant metal trim around the side window openings, and the athletic double five-spoke alloy wheels of our 2017 Audi A4, for example.

The 2017 A4 has Audi’s trademark hexagonal grille opening up front, with clean, sweeping lines that crease the hood beginning at the grille’s uppermost points. Secondary hood creases begin at the second-highest corner points on the grille, flowing through the headlights on their way to the hood, eventually terminating cleanly at the corners of the windshield. Headlights lend the face a determined look.

From the profile view, the 2017 Audi A4 continues its confident, yet understated design. There’s a pronounced crease that runs from the rearmost corner of the headlight lens to the foremost corner of the taillight lens. A slight convex shape on the door panels turns inward for a secondary crease that rests at the level of the wheel hubs. Our test car’s 18-inch alloy wheels were like fine jewelry meant to accentuate, but never distract from, the car’s sheet metal clothing.
At the rear, the 2017 Audi A4 has two wide-set taillights with slick LEDs.  There’s an ever-so-slight ducktail spoiler on the trunk lid. To its credit, the A4 retains more of a trunk lid than many compact sedans nowadays, adding to a perception of length. 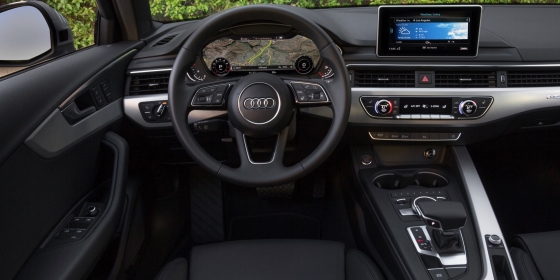 The interior of the 2017 Audi A4 was nicer than the Mercedes-AMG CLA45 we drove. There was no Alcantara suede on the steering wheel or seats like the Mercedes, but the leather all felt high-quailty and the seats were top-shelf. If interior ergonomics are your thing, it’d be a toss-up. The Audi’s seats felt like they were closer to the ground, giving the car a sportier feel from the driver’s seat even if the engine in the Merc was far hotter.

Audi’s interior design felt a lot more upscale than the CLA. Given the small price difference between base A4 and CLA models, that’s a definite feather in Audi’s cap. The full-width vent running across the dashboard was a neat touch, even if most of the “vent” was only cosmetic. Audi has some of the best steering wheels, and the A4’s was no exception. While not as supportive as Audi’s “S” trim sport seats, the front seats were very comfortable.

Audi walks all over Mercedes-Benz and BMW when it comes to infotainment. Audi uses an intuitive control dial in the center console that does all kinds of neat party tricks. For instance, you can use your finger on the surface of the control dial to trace the first letter of the name of someone you want to call when the display is in “phone” mode, and it’ll bring up a list of contacts whose name begins with that letter. Keep writing with your finger, and it narrows down the list. Pretty cool.

The best feature, though, has to be the digital instrument cluster. It’s a full-width TFT screen, and it is fully customizable. You can opt for large instruments or small ones. You can view a map of your surroundings with Google Maps satellite overlay that shows buildings and landmarks when zoomed in close. You can get a breakdown of which accessories are using fuel, and how much each contributes to fuel use.

Finally, our test Audi A4 had Bang & Olufsen audio. This came as part of the $8,600 Prestige Package and was among the best audio experiences one can have in the premium compact segment. Highs were crisp, but not sizzly like what we’ve recently experienced in Meridian-equipped Jaguars, while low-frequency response was punchy. B&O does an admirable job of making MP3s sound cleaner than they really are, too. That’s important since most of our music is now stored in our phones or in the cloud. 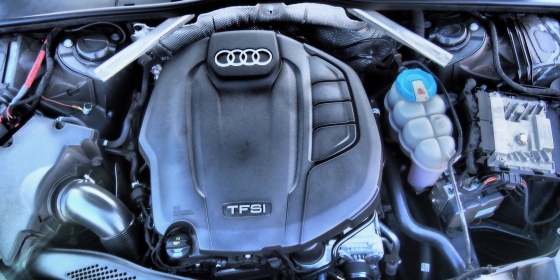 There’s a bevy of powertrains available in the 2017 Audi A4 globally. Here in America, it comes down to just one: a 2.0-liter TFSI turbocharged four-cylinder gasoline engine that makes an Audi-reported 252 horsepower and 273 lb-ft of torque. That’s plenty of oomph for a car the size of the A4. The test car laid down its power to all four wheels through a seven-speed S tronic dual-clutch automatic transmission. The transmission would shift quickly in regular driving around town or on backroads, ensuring relatively fuel-efficient travel. But not too fuel-efficient: The test car returned a tripmeter-indicated 27 MPG. 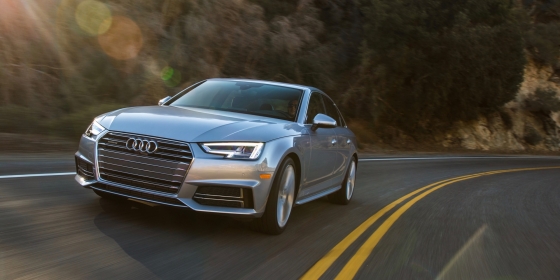 On the road, the A4 never lacks for acceleration or handling prowess. That little 2.0 four-banger makes a strong pull starting low in the rev range. It cruises in a relaxed way on interstates, but the dual-clutch autobox has a good sense for when you’re trying to dice it up in the twisties and will hold gears a little longer accordingly. This is doubly true for those willing to dial up the Audi Drive Select to its sportiest setting. For those who want to shift their own gears, there’s a six-speed manual transmission available for the A4. 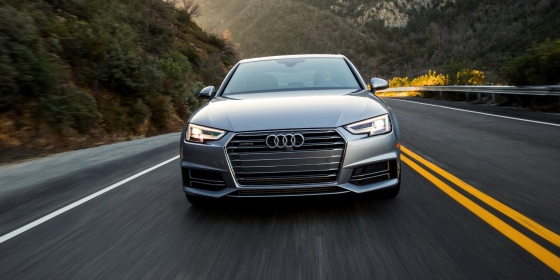 Though it is aimed more squarely at the Mercedes-Benz E Class, the Audi A4 and the Mercedes-AMG CLA45 we tested a few months ago make decent competitors. While the Mercedes-AMG is way, way up on power compared to the Audi, the Audi can be purchased much cheaper, and it proved the AMG CLA’s equal when driving fast on backroads at speeds that wouldn’t land us in jail. Audi quattro all-wheel drive is just about the best in the business, giving the car ridiculous amounts of stability in turns. There’s no front-wheel drive understeer or rear-wheel drive oversteer — just a perfect line, every time. The only advantage the AMG CLA would have here is on a race track. 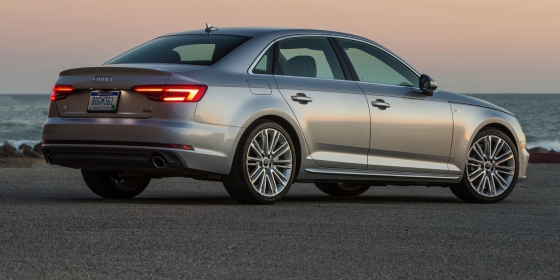 In sum, the 2017 Audi A4 is a handsome sedan that doesn’t announce itself too loudly while maintaining a level of precise handling and confidence at-speed that lesser-priced, non-European automobiles seldom attain. That’s in keeping with a tradition of German sedans. Understated confidence is something the Germans do very well.

While the BMW 3 Series used to have this kind of attractive, but not flashy sedan design down to a science, it has become a little more braggadocious in recent years. Similarly, the growth of the three-pointed star on the nose of the latest generation of Mercedes-Benz E Class is telltale to its ambitions. It sadly seems to be more important to announce yourself as a German car than to exude the quiet confidence once common in this class.  Even the Lexus IS, once a conservative Japanese take on the segment, is getting to be swoopy and polarizing in its styling. 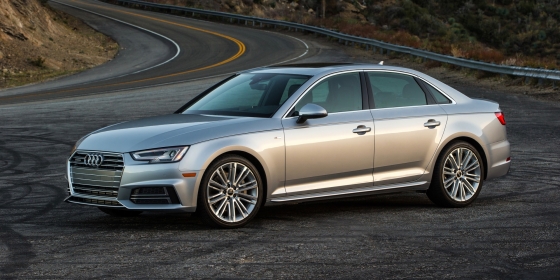 That is not to say any of the above cars aren’t capable of acceleration, speed, and handling worthy of their price tags. It’s just that the 2017 Audi A4 remains truer to the classic formula. We got lots of compliments from people who said the car was “nice” or “pretty” even if those people did not immediately recognize the car was an Audi. Its classic lines and proportions combine with modern accents and elements to give it a pleasing design that is classic, but not “old.”

The awesome part is, that mix of classical and modern carries over to the ride-and-handling department, too. Though the Audi A4 has the latest powertrain and safety technology on-board, it retains the kind of controlled ride and excellent handling for which German cars have long been famous.
In the field of luxury compact sedans, we’re fans of the Audi A4.