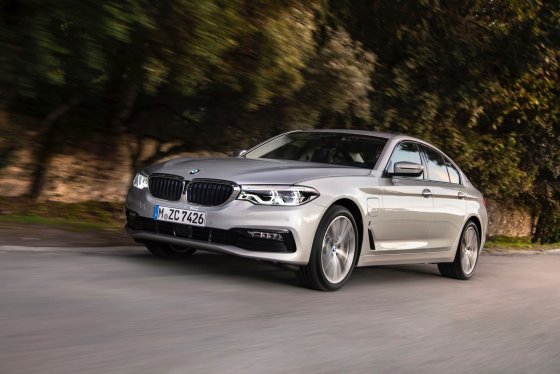 The BMW 5-Series is completely new for 2017, with a new platform that is longer and taller and stuffed with technology. None of that changes the excellent drive dynamics and performance of the 5 Series and with the 2017 BMW 530e iPerformance, that’s further augmented by the powerful efficiency of a plug-in hybrid.

When we think of hybrids, we usually think of something like a Toyota Prius or a Chevrolet Volt. Neither of which are particularly well-known for their performance. For the Germans, though, that’s not good enough and BMW’s iPerformance line has been shaking up the standard perception of plug-in vehicles by offering efficient designs in driver-centric packages. 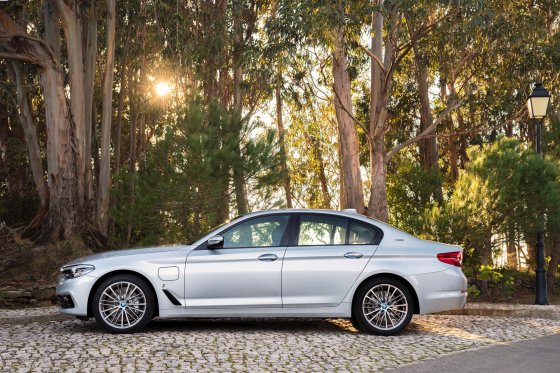 When looking at the 2017 BMW 5 Series, one would never know that the sedan has seen over an inch of length added and is nearly half an inch taller. The long, low, sleek look of the 5 Series remains, but with a new face and improved body design. The kidney grille and sloped hood are still part of the 5 Series design, as is the fast-paced body design.

What’s changed are fascia elements like the narrower headlamps and less pronounced scoop below the grille. Enlarged foglamp bezels offset the narrower upper portions of the fascia to balance out the 5 Series’ look from the front.

More changes come with the bodywork, which sees deeper lines with more pronunciation to accentuate the forward movement of the car. This helps make the greenhouse appear narrower, adding to the fast-paced look of the 5 Series. The clipped rear and short deck finish that. 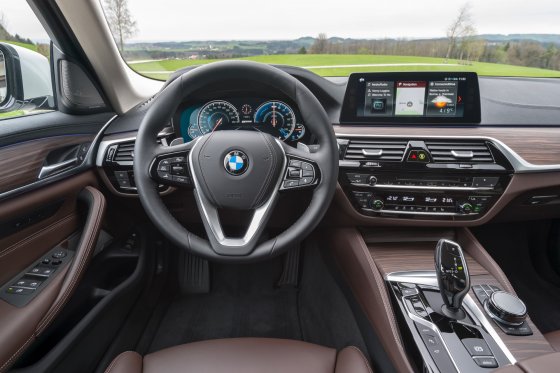 The BMW 5 Series has always had a bar-setting interior with a signature amount of excellent materials and workmanship. In this new 5 Series, that doesn’t change and with the 530e, premium materials are the basis for a great look. The narrowed dashboard and improved legroom in the back seats are new bonuses for 2017.

The dash may seem smaller, but it’s packed with a lot more tech. The infotainment in the 5 Series is the latest version of BMW’s user interface with a crisp screen and intelligent iDrive controller knob just ahead of the arm rest.

This year, the 5 Series adds gesture control (which debuted in the 7 Series last year) and updated navigation. The iDrive controller is also a touchpad for entering addresses and phone numbers by drawing with a finger – far faster than selecting from a clunky virtual keyboard on-screen. An added bonus to gesture control is that the infotainment can detect whether the driver or passenger is entering information. If the passenger is doing so, safety items that are locked to keep the driver focused on the road are unlocked to allow full access. This is smart use of the gesture control system for sure and adds a lot of convenience to its use.

Other gesture controls make changing the radio volume (twirl a finger, left for down, right for up) and accepting or rejecting phone calls (“come to me” finger curls or “cutthroat” to reject) easy. All of this can be done from the steering wheel, allowing the driver to control things without moving his or her hands or taking eyes off the road.

The 530e also has a remote parking option, which lets the driver park the car without being in it via a remote control interface through a smartphone. This makes parking in tight spaces or small garages easy. The smartphone app shows the 360-degree cameras on the car and works while in line of sight, letting the driver use the phone like a remote control to steer the car into place. This is augmented by the built-in safety systems of the BMW 5 Series. 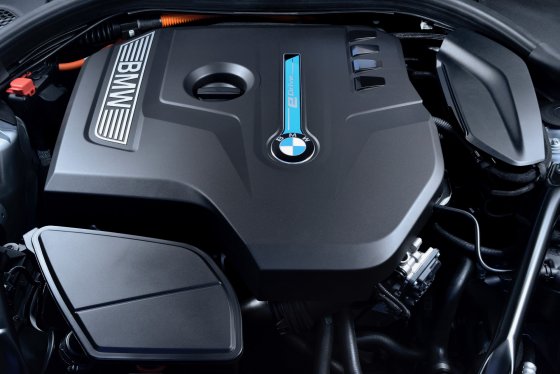 The 2017 BMW 530e has a 2.0-liter turbocharged four-cylinder engine that mates with an electric motor for all-wheel drive. This iPerformance machine has a total system output of 248 horsepower and 310 foot pounds of torque. The electric motor outputs 111 of those. A 9.2 kWh lithium-ion battery is placed underneath the rear seats to aid vehicle balance and a 9-speed sport automatic transmission drives the powertrain. 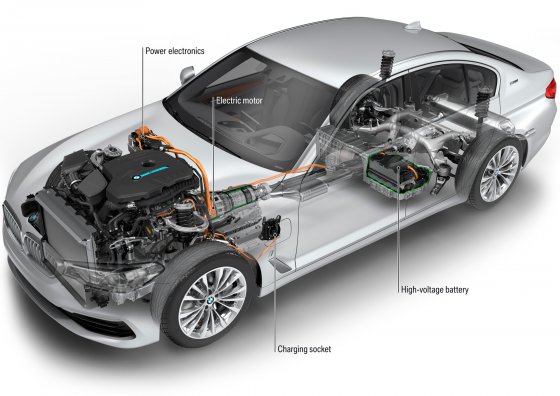 Altogether, these components mean sub-6-second 0-60 mph times, a top speed of 130 mph, and some seriously awesome fuel economy. The standard 530i, which has the same engine but not the plug-in hybrid components, is a great car in its own right. Yet its fuel economy is only just average for the segment at 27 mpg combined. With the 530e and its PHEV goodness, you can expect to see far more than that. Closer to 35 or more, depending on your driving habits.

The 90 Ah battery pack in the BMW 530e means around 15-20 miles of all-electric driving at up to 70 mph or so. This means that for most drivers, especially those not getting on the freeway, the daily commute is likely to stay fully electric. So gasoline is only required when your drive goes past that handful of miles. 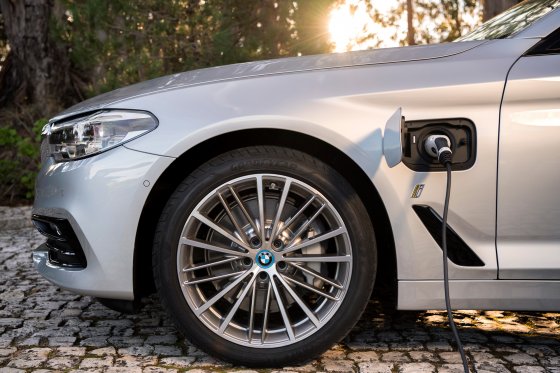 Those of us who live outside of the suburban norm, however, will still see a ton of fuel efficiency. At an average trip distance of 80 miles per drive, most of which is at freeway speeds of 75 mph or more, our MPG average was still almost 39 mpg.

On the road, the 2017 BMW 530e is also full of the drive performance expected of a Bimmer. It corners beautifully, accelerates with enthusiasm, and gives plenty of feedback without noise and vibration. The 5 Series is a comfortable, quiet vehicle with a lot of driver appeal and the 530e’s hybrid components don’t change that at all. 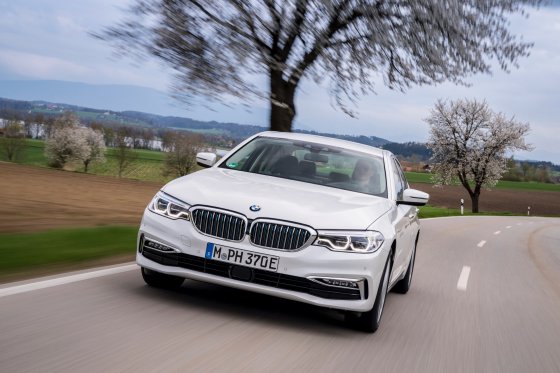 If anything, they add to it with more power at takeoff thanks to the electric torque-from-zero. The added weight of the batteries (roughly 200 pounds) is low-slung and actually improves the car’s balance a bit by lowering the center of gravity somewhat. All good things. 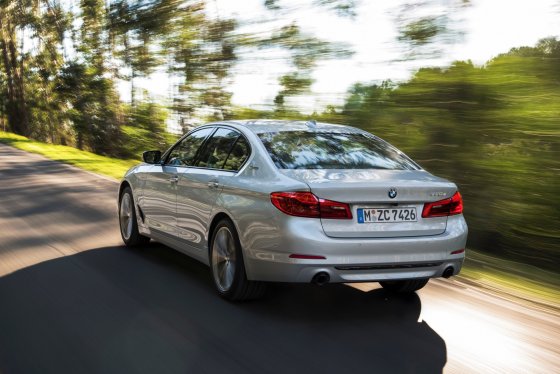 The 2017 BMW 530e iPerformance is likely the best option in the 5 Series lineup. It plugs into the wall to gain up to 20 miles of all-electric driving, doesn’t sacrifice the BMW drive experience (enhancing it instead), and has the best price of entry of the 5 Series models. With the $7,500 federal tax credit, the BMW 530e can be had for about the same price as the entry-level 530i. Add in state or local incentives and it can be even cheaper.

There’s a lot to love about the new BMW 5 Series. With the expectation-exceeding plug-in experience of the 530e and its hybrid cliche-busting goodness, we can’t help but be excited by a hybrid from Germany. The 2017 BMW 530e has really upped the ante for sport hybrid driving and efficiency expectation versus performance.