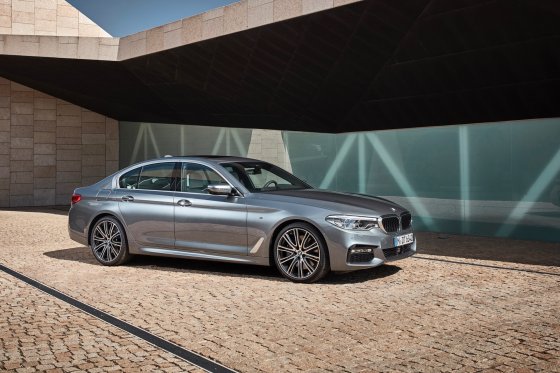 Long the standard-bearer of the luxury midsize sedan set, the BMW 5 Series is facing more competition nowadays than ever before. German rival Mercedes-Benz has its E-Class, and resurgent Jaguar has the new XF, which we drove recently and loved. And those are just two heavy-hitters in the segment. There’s also a new Audi A6 slated to make its appearance at the end of this year. There’s the Lexus GS, whose polarizing exterior design hides a competent chassis and powertrain that gives the Bimmer a run for its money. There’s also the Cadillac CTS, whose infotainment may have some rough edges but whose driving experience is right up there with the best in the segment.

With all this competition, is the BMW 5 Series still the standard-bearer? Based on the 2017 BMW 530i we drove recently, we’d say it’s got a pretty confident grip on the segment. 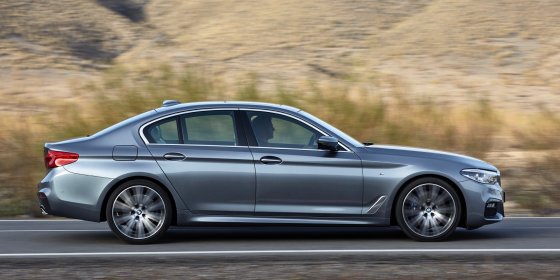 The newest iteration of the vaunted 5’er is probably closest in overall exterior measurements to the Mercedes-Benz E-Class (no surprise, it’s a longtime rival) and the Jaguar XF. Of the three, it does have the longest wheelbase, but also the widest overall width. However key measurements are fairly close between those three vehicles.

The 2017 BMW 530i we drove was painted Alpine White, one of only two colors that won’t require a $700 upcharge if you buy. The other “free” color is Jet Black. The white suits the body of the car perfectly, though, and complemented the Mocha Nappa leather interior ($1,000 extra) quite nicely.

The front of the 5 Series is dominated, of course, by the signature BMW twin-kidney grille. As BMW design has evolved over the years, the “kidneys” have gotten fatter, and this latest iteration of the 5’er is no exception. LED turn signal “eyebrows” flow off the outside upper edges of either kidney above our tester’s adaptive full LED headlights — a $1,050 option. A lower opening below the kidneys gives the front of the car somewhat of a grinning face and houses the car’s adaptive cruise control and collision avoidance hardware.

The side-view of the 5 Series showcases its exceptionally clean design, with one strong crease that flows neatly from the headlights, through both door handles, to the taillights. A lesser crease parallels it low on the doors, seemingly emanating from an air vent on the front fender. The car’s sporty design shows itself most clearly here, with a long hood and comparatively short decklid hinting at its front-engine, rear-wheel drive packaging and excellent weight distribution — BMW says 51.5%/48.5% front/rear.

At the rear, the BMW 530i we tested was inoffensive to the point of being a bit bland, when viewed straight-on. Taking a few steps to either side helped, as the dynamism of those side creases came into play and made the car look as athletic as it was. Twin parallelogram-like exhaust openings were nicely integrated into the lower bumper surfacing. 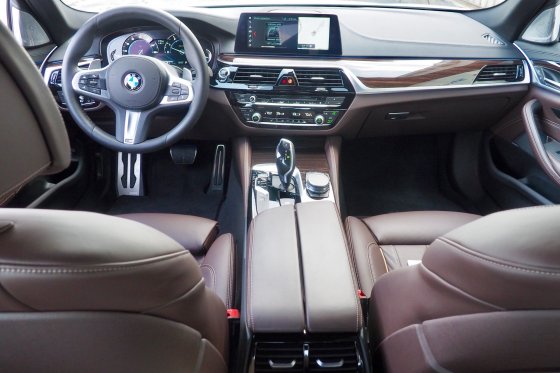 That Mocha brown Nappa leather made the interior of this car sexy. There’s no two ways of looking at it. Everyone who saw it remarked how gorgeous the interior was. The double-stitched diamond pattern sewn into the seats was marvelous. So were the nearly infinitely adjustable headrest pillows, which could be shaped to our preference.

Wood trim came as part of the M Sport Package ($2,600), which also brought the M Sport steering wheel and the SensaTec dashboard — BMW-speak for trademarked leatherette that sure fooled us into thinking our dash was wrapped in cowhide.

BMW iDrive infotainment controls continue to split drivers into two camps: You either love ‘em or hate ‘em. While we found the setup intuitive once we learned how the menus were structured, we also found it pretty distracting to use while driving. BMW gets points for the huge, high-definition screen, which came in handy especially when using the car’s parking cameras.

The 5’er was plenty big enough inside to carry a family of four, including a baby in a rear-facing car seat. BMW says the car has 38.8 inches of headroom, 41.4 inches of legroom for front passengers, and 36.5 inches of legroom for rear passengers. With that said, we found rear-seat legroom cramped for adults when the front seats were adjusted for six-footers. 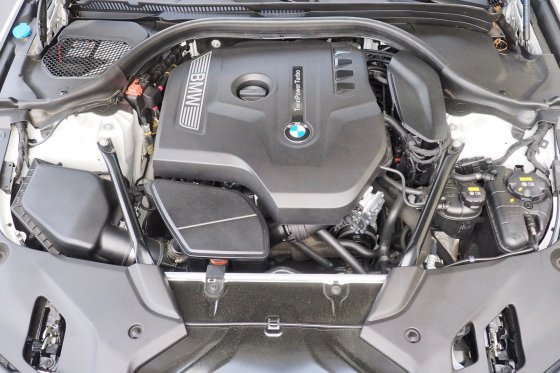 The E-Class and the XF also cop to this new normal. Both have base engines with just four cylinders, not six. That said, six-cylinder engines are options for all of the above models. BMW offers a TwinPower turbo inline six in the 540i. Jag offered the 3.0-liter supercharged gasoline V6, as seen in our recent XF 35t tester. The E-Class has only the 2.0-liter, 241-horse turbocharged four-cylinder gasser unless you pony up for one of the pricey  — and fast! — AMG variants, which get either an AMG-enhanced 3.0-liter twin-turbo V6 or an AMG-enhanced 4.0-liter twin-turbo V8. 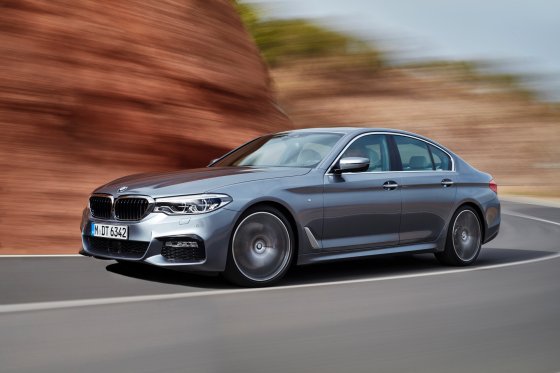 Driving the 2017 BMW 530i was a study in fluidity. The TwinPower 2.0-liter four-banger doesn’t make itself known unless you really ask it to speak up by burying your right foot. Triple-sealed doors help make the 530i supremely quiet at-speed. A friend of ours said the car was “regal,” in that it both looked expensive and rode expensive. We’d agree with that assessment.

The chassis tuning of our test car is to be lauded. While it’s not unbelievably fast off the line — BMW quotes a zero-to-60 time of six seconds — it’s the kind of car that handles itself so well that you don’t realize how fast you’re driving until you glance at the speedometer. We found ourselves bombing along at 80 MPH on a straight section of country two-lane early in the test week, before we had gotten used to the way the car really feels. Thankfully we were able to rein in that speed with the excellent brakes on our 530i test car before the local constabulary caught our shenanigans.

Give a nod to our car’s M Sport Package again for some of the handling alacrity here. It included BMW Dynamic Damper Control, which allows the suspension dampers to compensate for driving style and road conditions on the go. The package also included an aerodynamic kit and 19-inch lightweight alloy wheels that were wrapped in Continental ProContact GX SSR all-season grand touring tires. These tires were grippy enough for a our kind of spirited mountain driving without the harshness or ridiculously short tread life of dedicated performance tires.

A bone of contention with the steering in the 530i: It was awfully light for our tastes, even in “Sport” mode, which was supposed to dial-up the amount of steering effort and feedback. Throttle response and suspension tuning get notably sharper in Sport mode, but the difference in steering is not easily felt. BMW should work on further separating the three drive modes (the other two are Eco and Comfort) where steering is concerned. We’d also like it if the car maintained the last selected drive mode upon restart. Our tester defaulted back to Comfort each time, even if we had been in Eco or Sport just minutes earlier. 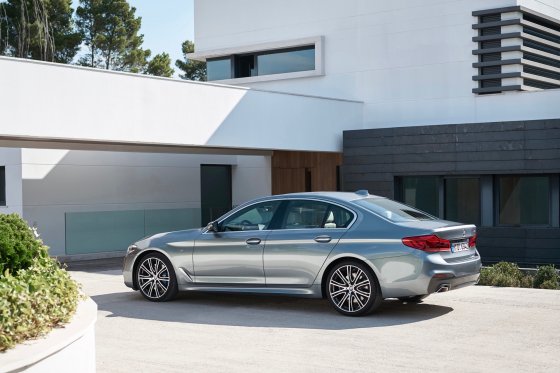 In the world of midsize luxury sedans, $75,000 gets you a lot of sweet-driving cars to consider. But few, if any combine the handsome, understated, athletic design and the equally luxurious and sporty driving experience of the 2017 BMW 530i.

With an awesome sound system, a top-shelf interior, a quiet-yet-sporty ride, and room for a family, the $74,160 BMW 530i we tested still sits at the top of the mountain. Others in the segment may do some things better than the 5 Series. The Jaguar XF has a prettier exhaust note and feels a little bit more like a sports car. The Mercedes-Benz E-Class arguably has a more noticeable exterior design and makes better use of wood in its interior. But neither overall package is as sound as the 5 Series — the best all-’rounder in the segment.