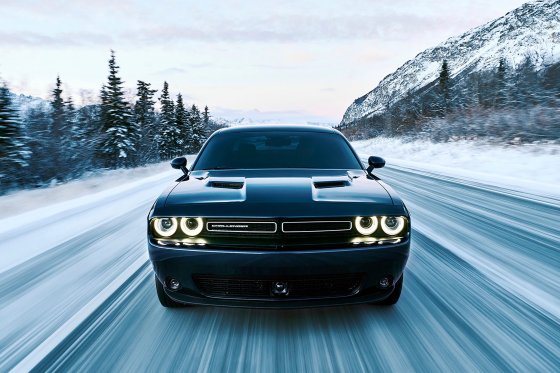 The idea of the Dodge Challenger GT was introduced a couple of years ago as a concept car at SEMA, fitted with a wide-body Mopar kit and some specialty wheels, the real hook was under that concept’s hood: an All Wheel Drive (AWD) powertrain featuring huge amounts of V8-powered goodness.

The boosted 5.7-liter V8 in that GT Concept was mated to an all-wheel drive chassis and some wonderful Mopar edition suspension kit upgrades. It was a sight to behold and worthy of all of the track-ready drool we could muster. 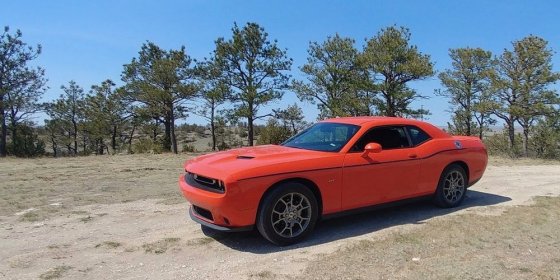 Sadly, the 2017 Challenger GT model drops a lot of the concept’s goodies in favor of real-world design, but keeps the AWD we found highly compelling. We spent a week in the 2017 Dodge Challenger GT with its V6-powered AWD and beautiful orange paint learning that lots of grumbling muscle isn’t always what’s needed. Good times come with an everyday balance and fun rally can be had without throwing a lot of horses into the dirt. 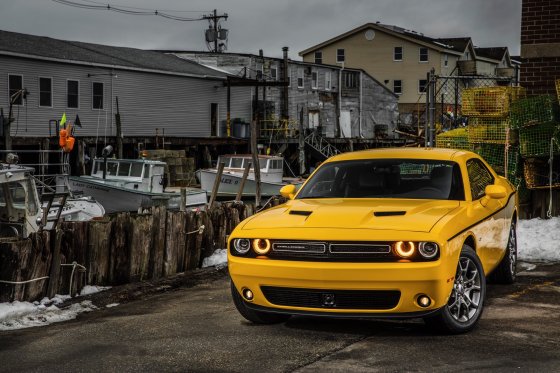 The Challenger GT is identical to all of the Challenger lineup, with the exception of small GT badges on the front fenders and rear of the car. The same nostalgic muscle car look, reminiscent of the 1970 Charger, and heavy width are there. Slits in the hood denote some Mopar goodies might be under the hood and air dams below are flexible enough to make off-roading a reality in this version of the car.

We are fans of the Challenger’s muscular, very American look. Dodge has definitely managed to capture the old school Americana that appeals to so many buyers today. Every Dodge vehicle has some of it going on and the Challenger is the car that leads the pack. 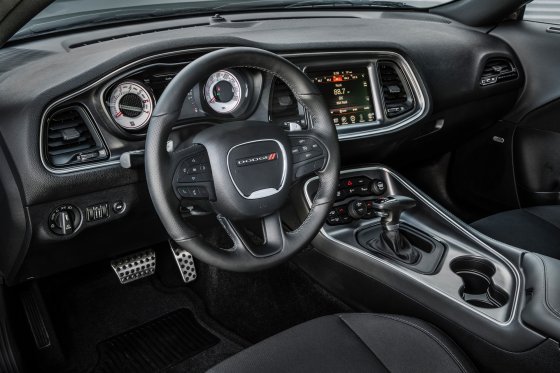 On the inside, the 2017 Dodge Challenger GT is very well done. It has the largest interior of any car in its class and has one of the only usable back seats in the coupe realm. The driver and front passenger are kept very comfortable and the interior is very comfortable and modern, in contrast to the exterior’s throwback looks. 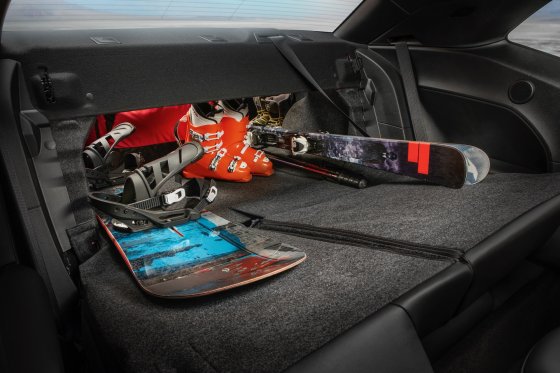 Although modernized, the interior of the Challenger GT makes sure that those inside know that this is still a muscle coupe. High materials quality is found, but heaviness is the name of the game when it comes to the design motif. The fat shift lever, large instruments, and thick center console are reminders that this is a very American car. The huge trunk, larger than that found in most sedans, is also both useful and unusual. 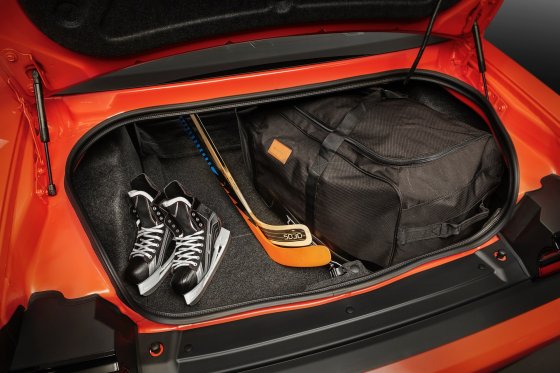 Infotainment in the Challenger GT comes courtesy of the Chrysler UConnect system that continues to be the best in the business for usability and excellence. With upgrades, it offers good navigation, strong daily use features, and is one of the only systems on the market that has voice-to-text. 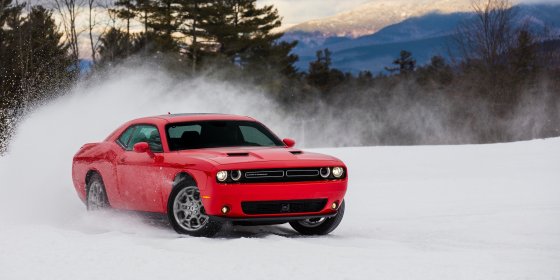 The Dodge Challenger shares a platform with the big Chrysler 300 sedan, so lifting the AWD powertrain from that car to put it into the Challenger GT was relatively easy. The same 3.6-liter V6 that outputs 305 horsepower and 268 foot pounds of torque runs to all four wheels in a 30:70 front:rear split (at maximum). The driver can force rear-wheel drive when they wish, giving a lot of fishtail fun or corner-ready slides, but AWD means steady performance and traction all of the time. 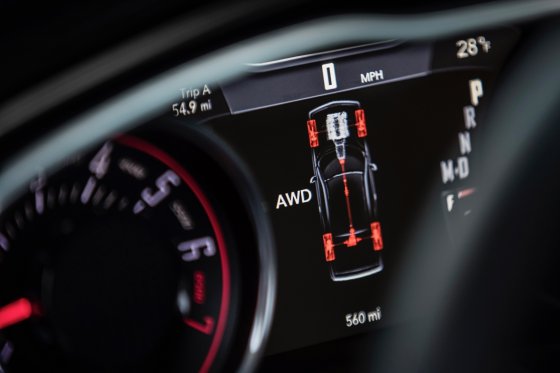 Where the AWD really comes into play is in two situations: take-offs from scratch and out in the dirt or snow. The 0-60 mph times of the Challenger GT are impressive for a V6-powered muscle car. Our best average was 6.9 seconds from a standstill and professionals on a closed track can probably expect to take a few tenths off of that. Dodge claims a 6.5-second 0-60 sprint, which we think is doable. Top speed in the 2017 Challenger GT is 130 mph and the sweet spot for power in the RPM band is at around 5,200, give or take.

The huge Challenger GT feels fast and furious in the dirt too. The AWD adds a lot of control when the dust is flying and the roadway begins to slide out from under. We had a blast throwing dirt and gravel as we spun through the countryside of Wyoming, where dirt roads are often the norm. Corner slides, bumpy speeds, and donuts were more than fun and the Dukes of Hazzard orange on our Challenger GT just added icing to that fun cake. 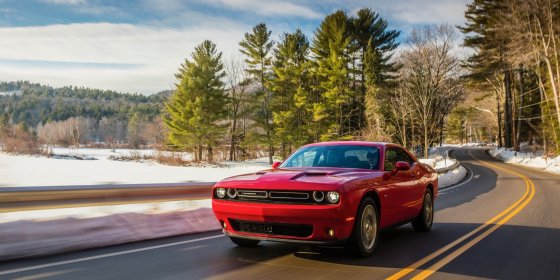 Amazingly, the 2017 Dodge Challenger GT is also great as an everyday car. When the weather turns bad, the car keeps going. Unlike our experience with a rear-drive Challenger, which produced a 180-degree turn on the ice when we planned to be going straight. Plus the EPA ratings for the Challenger GT are realistic at 27 mpg on the highway and 18 mpg in town. Most people will likely average about 21 mpg, as we did. That’s with a lot of foot stomping on the accelerator, mind you.

On the highway, the 2017 Challenger GT is smooth and confident, as are all Challenger models. It grumbles with intake when the pedal is pressed, giving it a muscular feel, but never feels overpowered or out of control (unlike, say, a Demon). This is truly American-style driving at its finest. 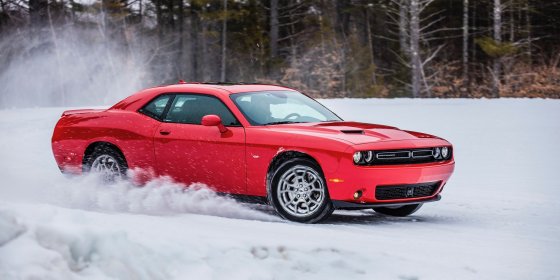 For serious hooning, though, we recommend that the driver stop the car at the dirt track entrance, hold down the Traction Control button for a couple of seconds until it beeps, and watch for the RWD locked notice on the driver info screen in the instrument cluster. From there, all of the nanny systems are off and the Challenger GT will act as a rear-wheel sedan with all electronic helps off and out of the way. Things can be restored to normal by either pressing the Traction Control button again or putting the car into Park. 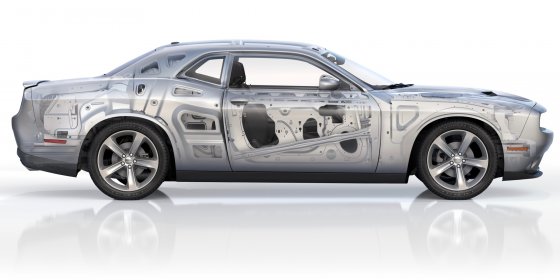 There’s probably some safety stuff on the Challenger GT. We’re sure there is. We just didn’t bother to check. We were too busy pretending to be Bo and Luke Duke, wondering where Daisy got off to as we kept an eye out for Roscoe. 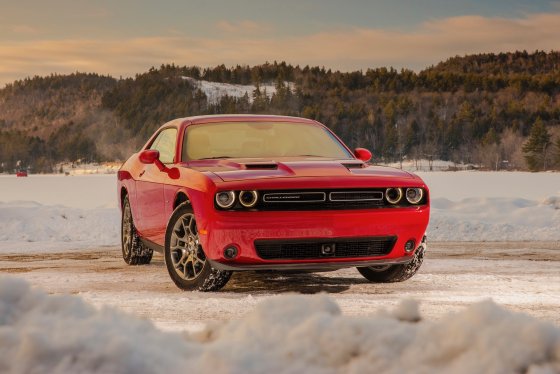 Once we got over the disappointment that the 2017 Dodge Challenger GT would not include the throaty V8 muscle churning under its hood, the goodness of the powertrain began to come through. The V6 offers plenty of get-up for those who aren’t serious track junkies and the AWD is unusual for the segment and very well done.

All of the Challenger’s inherent excellence, such as its smooth road presence, great manners on the highway, and roomy interior are intact in the GT model. The drivetrain adds to that with the dependability of all wheels turning when the going gets tougher and the fuel economy (or fun!) that comes with the magnetic coupling that disconnects the front wheels when AWD isn’t needed or wanted.

There’s a lot of excellence to be had in the Challenger GT and we hope to see some competitors take note of this and rethink some of their aging ideas about what a muscle car might be. The 2017 Dodge Challenger GT starts at about $35,000 in a well-done base package.