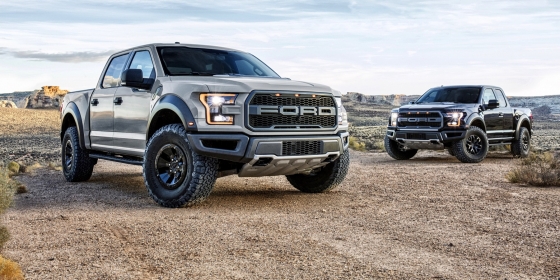 Blasting through the desert in a new Raptor is mind blowing.

While muscle car guys love to debate the merits of a Mustang vs. a Camaro vs. a Challenger, there is really no debate for truck guys. When you want to go balls out off-road there really is only one choice – the 2017 Ford F-150 Raptor.

A few weeks ago Ford flew us down to their testing facility in Borrego Springs, California. It is a stretch of wide-open desert east of San Diego, California and is ideally suited for putting the 2017 Ford F-150 Raptor through the paces. While the truck didn’t disappoint on the desert, it did surprise in other areas.

Full Throttle on the Sand 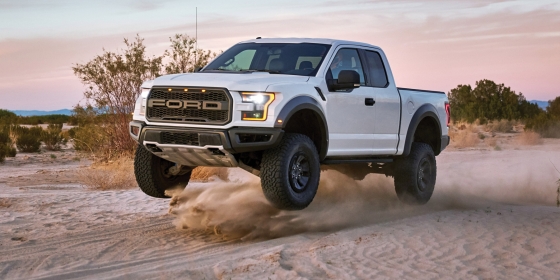 You can get air in a new Raptor with little effort. We “might” have done it.

What is the 2017 Ford F-150 Raptor built for? Speed, copious amounts of speed off-roading. In fact, with its new suspension, frame, Baja off-road driving mode and the new 3.5L high-output EcoBoost engine, it drives better when going faster. Yes, faster is smoother.

At least that was what my driving instructor kept telling me and we tried to oblige. Driving triple-digits off-road is like nothing we have ever done before and it remarkably different (and faster feeling) than driving on a track. Hitting the triple-digit mark requires a lot of trust and a very capable truck. However, we didn’t start out going this fast. Instead, the truck took us to that speed. 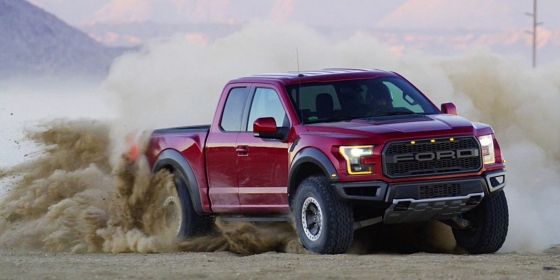 Let’s explain. During the nearly hour behind the wheel, we first drove the truck at around 50-60 MPH. This was really to get a sense of it and plus get a feeling for the open desert. As we drove, the new BFGoodrich K02 tires started building our confidence up by the remarkable way they kept throwing us (literally) back into the groove made in the sand by various drivers. These tires almost felt un-wordly and many times we had to confirm what we were feeling was the tires snapping us back into the groove and not the traction control. (Note: We confirmed this later when the traction control saved our butt from smashing into a bush.) 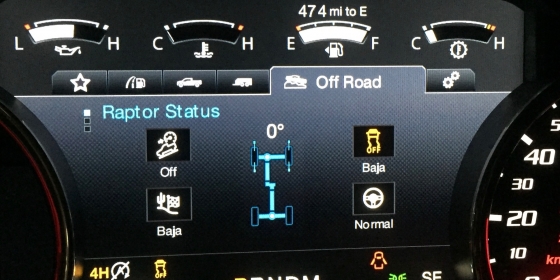 As the tires bred confidence in our driving ability so did the rest of the truck. As we pushed past the 70 MPH barrier, the re-engineered 3.0-inch FOX Shocks smoothed out the terrain better. With their bypass reservoirs cycling oil to prevent shock fade, the shocks kept improving our ride quality the faster we went. Add in the fact, the 10-speed transmission restricted to 6-speeds in Baja mode provided the right gear for powering out of the corners and we kept pushing the gas pedal further and further to the floor. 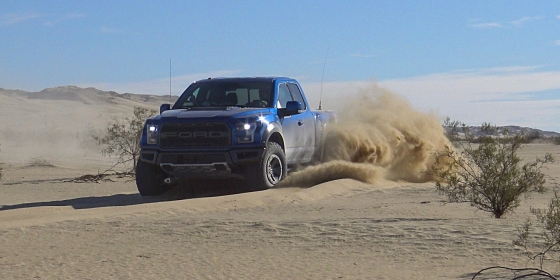 Finally, armed with new-found confidence from the truck’s equipment and engineering, we pushed the gas pedal all the way to triple-digits. As our jaws dropped at what driving that fast off-road felt like, our co-pilot simply muttered they go faster through that section all the time. Indeed, we felt like novices at the end of our drive, however, given the chance to drive the course many times with the truck and we know we would have gotten into trouble. 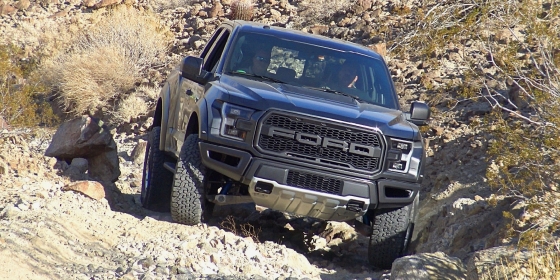 We were a bit surprised how well the 2017 Raptor performed as a rock crawler.

The most interesting demonstration of the 2017 Ford F-150 Raptor truck’s prowess was doing some rock crawling with it. While most consumers don’t think of the truck as a rock crawler, it is indeed capable of climbing up a rock bed as we found out first hand. 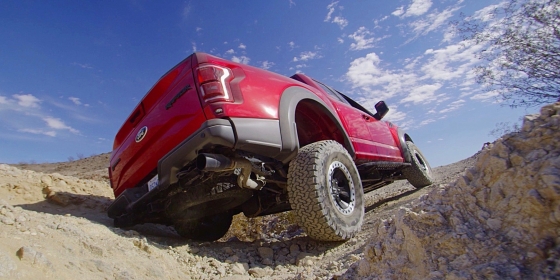 Ford setup an off-road track which took us up a steep grade with large rocks strewn in the middle of it. At the top, we descended utilizing the downhill assist feature found in the truck and drove back through a rough-cut desert trail. Not surprisingly the Ford F-150 Raptor handled the rocky trail like it was nothing powering all the way to the top. The downhill assist also worked flawlessly allowing us to coast to the bottom of the hill stress free. 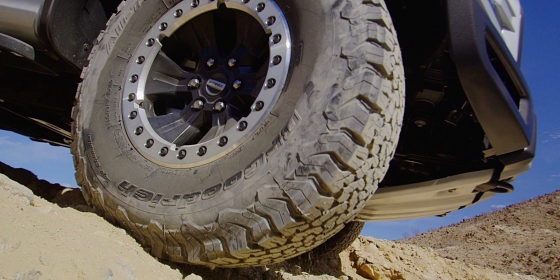 While the Ford Raptor certainly doesn’t have the off-road crawl control prowess of competitors like the Toyota Tacoma or any of the Jeep Wranglers, it did surprise us with its capability. In real-world driving scenarios, we could see a Ford Raptor doing 90 percent of what a crawl-control enabled Toyota Tacoma or Jeep Wrangler could while destroying both of those vehicles in full-out desert racing.

On the Road, One Final Surprise 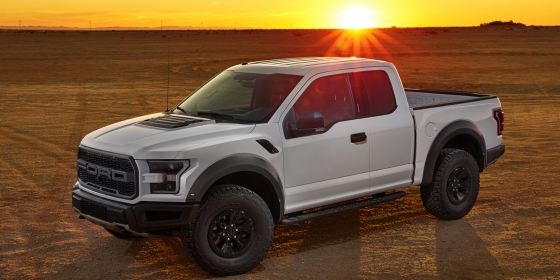 On the road, the Raptor really impressed with how comfortable it was to drive.

The last surprise to us was how well the 2017 Ford F-150 Raptor handled the road. Typically, with off-road oriented vehicles, you sacrifice on-road comfort for off-road capability. This is not the case with the Ford Raptor. Thanks to the new shocks, the thicker frame and the K02 tires along with a slew of different drive modes including steering wheel modes, the Ford F-150 drove the open road as well as many sedans in the marketplace.

It truly is a big achievement how Ford was able to marry both the on-road with the off-road capability of the Raptor to deliver both to consumers. Add in improved fuel economy and performance from the high-output 3.5L EcoBoost and new 10-speed transmission and it is hard to find anything not to like about this truck. 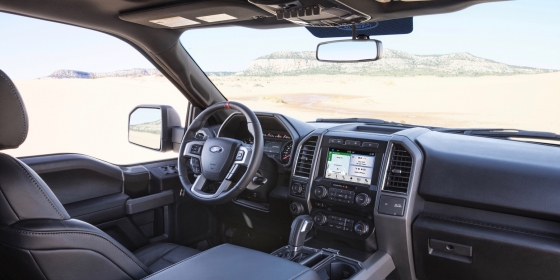 Sure, consumers will likely complain about the lack of a deep throaty exhaust note and/or not being able to find a deal at the dealer, but after driving it across the open desert, you are literally going too fast to listen to the truck anyway. On the price, well, sorry Charlie. If you want to have the time of your life driving ridiculously fast across the open desert and make your buddies jealous, it is going to cost you. 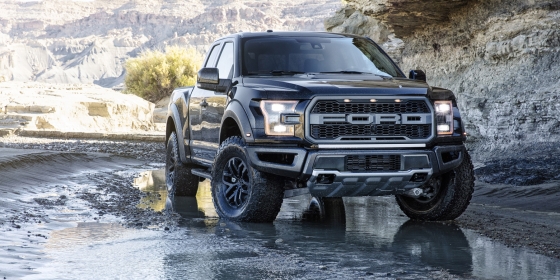 The 2017 Ford F-150 Raptor should be at dealers now with a starting MSRP at just less than $50k. We expect the average price to be around $60k with various options. And no, you can’t take a stock F-150, through some after-market shocks and tires and call it a Raptor. A man’s truck demands a man’s price.

Oh, and it likes the snow too…