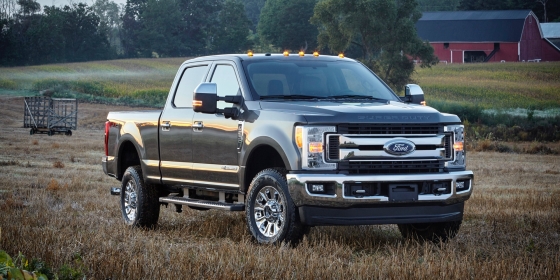 Ford has totally revamped their Super Duty F-250 for the 2017 model year. This redesign sees a lot of changes, including the addition of the aluminum bodywork found on the half-ton F-150 now introduced for the first time into the Super Duty line. With a huge amount of power, a lot of rugged capability, and a great look coupled to a comfortable interior, the new 2017 Ford F-250 has really got something going on.

The term “game changing” is over-used, but in this case, the F-250 is definitely setting new benchmarks for the heavy-duty truck market. Underneath the new skin is a strengthened frame, more powerful engine options, and a lot of new technology for driver convenience and daily use.

Driving a big, capable heavy-duty truck doesn’t have to mean that creature comforts are ignored. Ford added adaptive cruise control, collision warning systems, and a 360-degree surround view set of cameras to the 2017 Ford F-250’s options list, for starters. Some other great options include some aimed specifically at trailering, such as blind-spot monitoring that can cover the length of the trailer, a pair of rearview camera plugs for the trailer, and a trailer tire-pressure monitoring system.

In all, Ford has greatly improved the 2017 Ford F-250 Super Duty to make it a much more user-friendly heavy-duty pickup truck. It’s ready for daily driving as well as hard work. 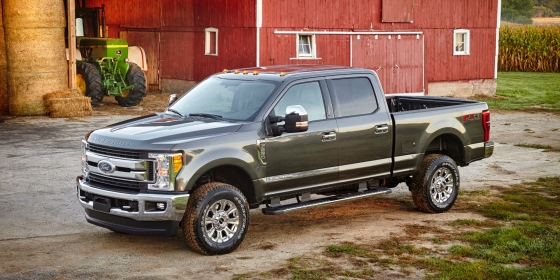 On the outside, changes to the 2017 Ford F-250 versus the previous generation of the heavy-duty truck are minimal. The skin on the new F-250 is styled in line with the entire F-series, with a square front fascia, huge grille, C-shaped headlamps, understated fenders, and somewhat flat bodywork along the sides.

This same-old-same-old look, however, belies some very big changes to the truck. The 2017 F-250 is very different from its predecessor. The aluminum bodywork meant that some changes were made to styling in order to better accommodate the stamping requirements of the new material, which is about twenty percent thicker than the aluminum on the F-150. Thus body paneling is a bit more flat and creases are a little more sharply defined than they were before.

Subtle changes to the hood and lower bumper cover also mean that the F-250 is now more square-ish in look with a somewhat higher engine profile to give the new Ford a more muscular appeal. Air dams on the front and undercarriage of the truck are also a bit more aggressive for better aerodynamics.

2017 also brings a couple of new wheel options and some tailoring of the side mirrors for better visibility and use. The F-250 itself is also larger and bulkier in terms of footprint than its predecessor, though that change is not as easy to note with only the eyeballs. The look of the 2017 Ford F-250 Super Duty is a combination of refinement and muscle, made to give the pickup a robust but not burly look and Ford achieved this goal nicely. 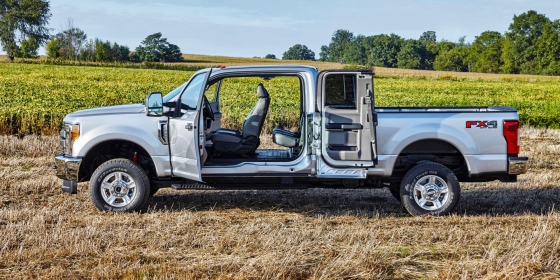 Getting in and out of the big F-250 is not an easy feat, but some options like power side rails and the standard-issue big grab handles in both front and rear make that easier. The wide-swinging doors on the front of all cab configurations and the fold-back rear doors of the king cab are especially nice while the wide swing of the crew cab is also helpful. We’re also not embarrassed to say we appreciate the “Man Step” on the rear tailgate. 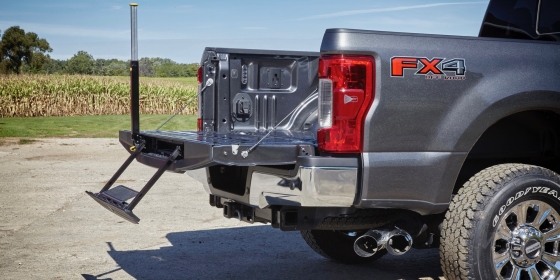 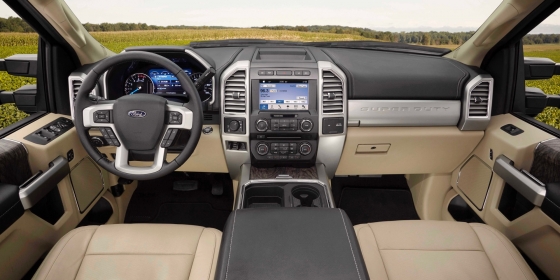 If the F-250 seems to have a more F-150-ish look to it, that is by design. The interior of the 2017 F-250 takes a lot of cues from the smaller half-ton, but keeps some of the expected workaday expectation of the bigger heavy-duty class. The gear shifter, for example, is on the column rather than on the console, which means there is more storage on the conwsole as well. A few other HD-only touches, such as beefier grab handles, higher seating, and a bit more space in the back seats are also kept thanks to the larger size of the F-250 versus its light-duty brethren.

The interior layout of the F-250 is very well done. Seating is very comfortable, even in lower trims, and gets very good in the upper trims. The top trims offer 10-way adjustability and heating, cooling and massage as well. Rear jump seats in the king cab are okay for adults, but mostly meant for children and dogs, but the crew cab offers unusually comfortable seating that is nearly on par with the front passenger’s seat for spaciousness and comfort. 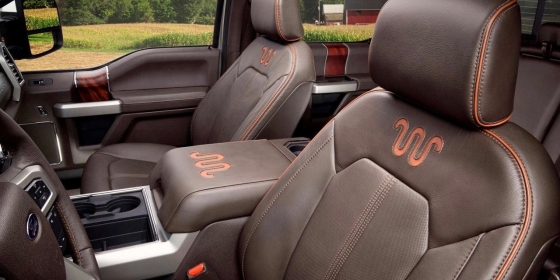 Options in the 2017 Ford F-250 Super Duty are plentiful. There are no fewer than five trim levels for the F-250, starting with the XL and moving all the way to the top-level Platinum. We drove the very “Cowboy Up!” King Ranch edition with its thick use of saddle leather and King Ranch stamping and needlework throughout the cabin’s upholstery.

For the 2017 model year, the best-selling packages are likely to be the Lariat and King Ranch models, which offer a great mix of accoutrements and tech for the money. Driver convenience items like automatic headlamps (and high beams), remote starting, heated/vented front seating, and navigation are standard or easily added to these packages. A full suite of parking sensors, leather upholstery (and leather-wrapped steering), and power-folding/telescoping side mirrors are also standard equipment with the King Ranch and Lariat models.

For infotainment, Ford’s Sync 3 system is available in most of the 2017 Ford F-250 models and is standard equipment in the Lariat and higher trims. This runs through an 8-inch touchscreen with some of the best voice-activation and Bluetooth connectivity you’ll find anywhere. The two 110-volt household outlets and two USB charging ports are also welcome in today’s connected world. 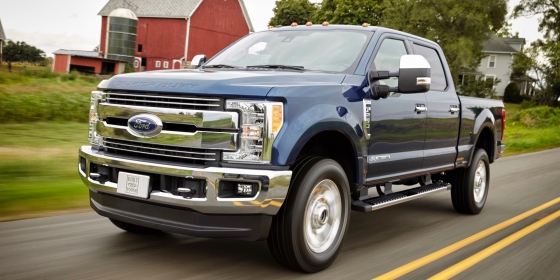 Ford dropped a lot of body weight from the F-250 with the new aluminum paneling, but this change also meant that the 2017 Ford F-250 Super Duty had some room to grow in other ways. Namely in framing, which has been beefed up with high-strength steel along the main frame rails and the crossmembers. This results in a more rigid frame overall with better strength and more capability. Ford says that the framing is now 95 percent high-strength steel, which is both stronger and less heavy than other steels previously used.

There are two engine options for the 2017 Ford F-250. A burly 6.2-liter gasoline V8 is standard, outputting 385 horsepower and 430 pound-feet of torque. This runs through a six-speed automatic transmission in rear-wheel drive with four-wheel drive as an option. 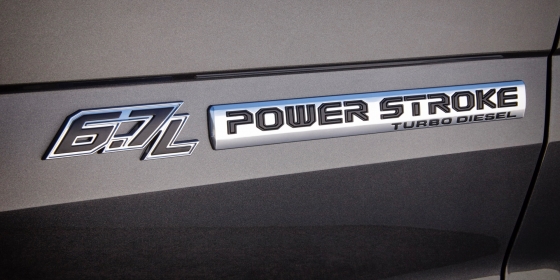 The other engine option is a powerhouse 6.7-liter turbodiesel V8 that outputs 440 horsepower and 925 lb-ft of torque through the same six-speed transmission. Again, rear-wheel drive is standard and 4WD is optional. This engine was on our test model this year with a maximum tow rating of 18,000 pounds at the bumper and 18,600 with a gooseneck in the bed. Maximum payload is rated at 4,200 pounds (regular cab configuration) or 3,450 in crew cab with 4WD. Other maximums fall between those for each cab option.

On the road, the purring diesel drives very well with only minimal noise coming into the cab during normal driving. When pressed, the turbodiesel emits a strong roar as it pulls the truck ahead quickly. Outside of the standard problems with a pickup truck of this size, maneuverability and getting around are normal for the truck. 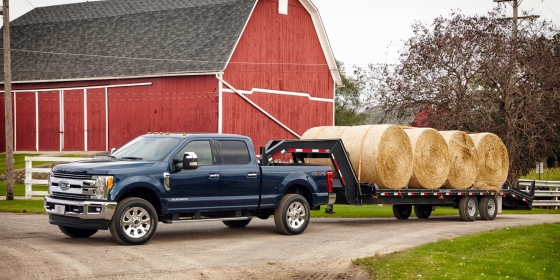 When towing, the 2017 Ford F-250 Super Duty has a strong presence that really muscles a trailer forward. There is little of the trailer push-pull happening at the bumper as might be noted in the smaller F-150, and the big diesel engine has little trouble handling a well-loaded trailer. Tow mode means good sway control is built-in and the integrated trailer braking is easy to adjust. The telescoping side mirrors give a lot of visibility when pulling a trailer, though longer units may be more of an issue, requiring additional mirrors. 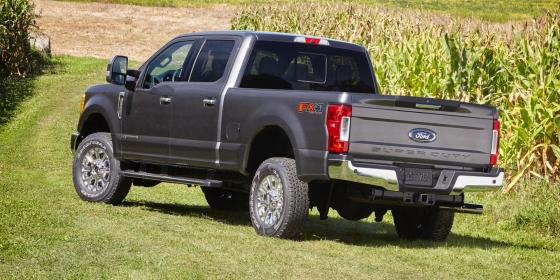 As should be expected in an HD pickup truck, safety items such as trailer sway control and a suite of airbags are standard issue in the F-250. Ford also includes the automated post-crash alert system and Ford’s MyKey protections are also standard in the 2017 F-250. 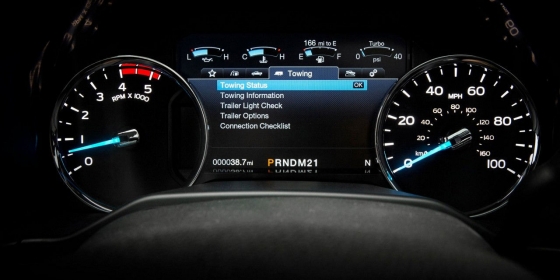 Trim levels above the Lariat model also include rear parking sensors as standard. A rearview camera is included on all but the base model F-250. Safety upgrade options include a 360-degree camera system, an optional trailer camera that integrates with the dash-mounted screen, and a trailer backing system meant to help novices move a trailer into position or get hitched up quickly. 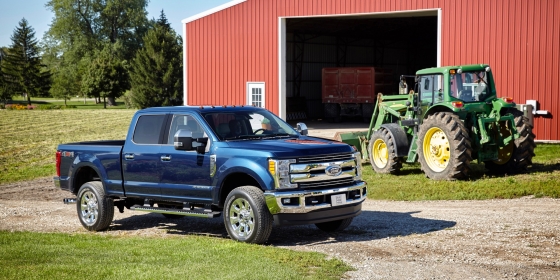 For those who need a heavy-duty pickup truck, there are options from all three domestic makes. A chief seller on the market is the Ford F-250 and this year’s revamp of the truck shows that Ford wants to remain a top-seller in the segment. With up to seven cameras to feed data into the cockpit, a lot of off-the-shelf factory inclusions for everyday needs in an HD truck, and a solid amount of capability in both towing and hauling, the F-250 definitely sets standards for the industry. Advanced electronics aren’t just gimmicks, but actually aid a driver during long hauls or heavy traffic situations and integrated towing and trailer options can go a long way towards improving the lives of those who work their trucks for a living.

We are very impressed with the all-new 2017 Ford F-250 Super Duty in its King Ranch packaging with plenty of workaday options included. Our test model rings in at $76,000 and change with delivery, but offers a lot of capability and everyday comfort for that price.