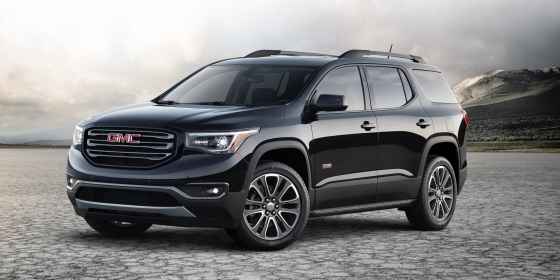 Chances are if you’re reading this, you’re an American male who has been taught “bigger is better” all your life. You’re gonna have to get over that if you’re a fan of the GMC Acadia, which shrank considerably with its 2017 redesign. Don’t worry. You’ll see why that old saying is often a lie — or at best, misguided — as soon as you get behind the wheel of the 2017 Acadia. 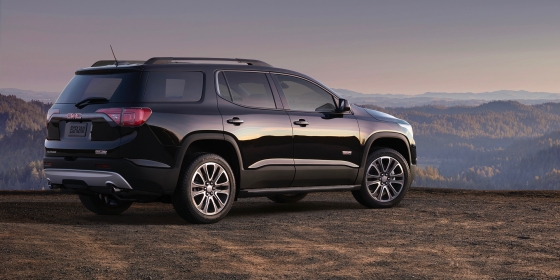 It’s hard to deny the 2017 GMC Acadia has sex appeal. Random strangers would stop us in parking lots to ask what it was. We caught several more ogling its taut body and handsome features, though they made nary a peep. And — in a sure sign of a successful design — the 2017 GMC Acadia was just as likely to elicit that reaction from women as it was from men. It’s got a healthy dose of machismo, but it’s not douchey about it.

Basically, GMC gave it square jaws and a nice haircut compared to the somewhat bulbous-looking first-gen model. The 2017 GMC Acadia comes out looking a lot more comfortable in its duds than its bowtie-wearing, slightly longer cousin, the Chevy Traverse, with our tester’s black metalflake paint looking particularly well-suited to the all-business exterior. Tasteful black plastic trim frames the wheel arches and lower bumper areas, where stone chips would likely be a headache for painted parts anyway. Twelve-spoke, 20-inch alloy wheels on our SLT All-Terrain test model were very well done and were shod in Michelin Premier 235/55 rubber that looked just trucky enough to fit the design ethos.

In effect, the GMC Acadia is like the guy who started taking his physique seriously and, as a consequence, lost a lot of weight over the summer. Now school’s back in session, and he’s getting all the attention. GMC trimmed 700 lbs from the model compared to its predecessor, mostly by making it shorter in overall length (193.6 vs 200.8 inches) and width (75.4 vs 78.9 inches) as well as using more high-strength steel. The exterior looks more muscular and a lot less awkward than the first generation Acadia. The Acadia moved down a size classification, from full-size to midsize, but is still significantly larger than its little sister, the GMC Terrain. 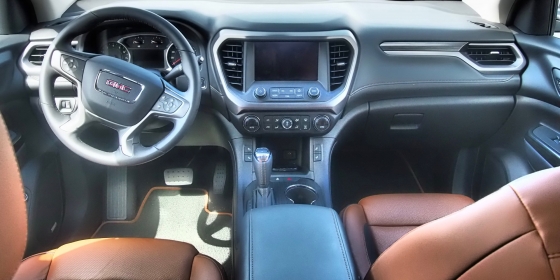 Inside, the all-business attitude continues. Our tester was outfitted with optional leather seats that were about the same color (and comfort!) as a well-used baseball glove. The dash design was clean, but not spartan, with metal trim accents and trapezoidal vent openings to keep things interesting for your passengers. In the center of the dash was a revised GMC IntelliLink infotainment touchscreen measuring eight inches diagonally. A wide center console housed two cupholders, the shift lever, and a useful center armrest/storage cubby. Rear seat passengers got their own vents and a comfy, wide, leather-covered bench seat.

The 2017 GMC Acadia gets the latest iteration of General Motors’ ubiquitous 3.6-liter V6 that has been in practically everything the General builds. This one has been massaged and redeveloped, as it is the fourth generation of the so-called “High-Feature V6” offered by GM and makes a reported 310 horsepower and 271 lb-ft of torque. It’s plenty to motivate the 2017 GMC Acadia. Consider that an older generation of this engine that made considerably less power (288 horsepower, 270 lb-ft) was under the hood of the much heavier, larger first-gen Acadia. You start to get the picture that the new Acadia is much more nimble.

To be fair, it’s still a crossover SUV — not a sports car. But get used to the typically easygoing GM throttle tuning, and there’s enough muscle to confidently elbow your way into the hole at the top of the on-ramp. The six-speed automatic transmission is to be credited for doing so well managing the power generated by the engine, as it wasn’t prone to hunting or bogging. The stiffened chassis is evident when the road turns rough or when taking corners at speed, as the redesigned GMC Acadia feels much more confident than its predecessor. The handling department is truly where the decision to go smaller pays dividends. 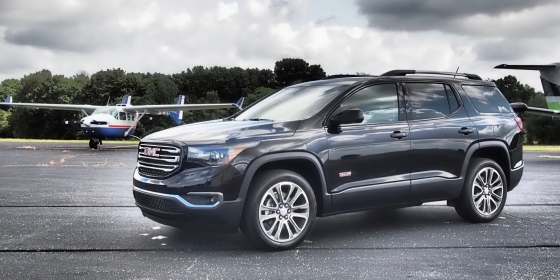 Perhaps most noteworthy for the workaday commuter is the GMC Acadia’s improvement in fuel economy. The 2017 all-wheel drive-equipped model we tested scores 18 MPG city, 25 MPG highway, 20 MPG combined, according to EPA — and that’s with the optional V6. If you opt for the base 2.5-liter four-cylinder and all-wheel drive, the highway mileage remains the same while the city mileage pumps up three whole miles per gallon, bringing the combined score to 23 MPG. Impressive for something as luxurious and admittedly still quite large as the Acadia. The previous generation came only with a V6 and was rated at 15 city/22 highway/18 combined. In our test week with the 2017 Acadia, we did mixed driving and came up with 24 MPG on the trip computer thanks in no small part to GMC’s cylinder deactivation programming that saw the engine operate as a V4 instead of a V6 when throttle application was light. 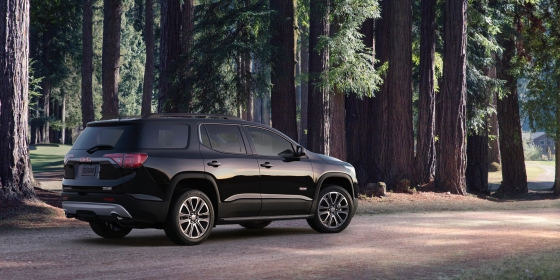 Our tester’s options included the All-Terrain package ($1,800) that gave the Acadia a five-passenger, two-row layout instead of a six-passenger, three-row layout that is standard. It added the advanced all-wheel drive system with hill descent control and 20-inch aluminum wheels, as well. Our tester also came with the dual panoramic sunroof ($1,400), a trailering package ($650), the full-zoot infotainment suite with navigation system ($495), premium Ebony Twilight Metallic paint ($395), and the All-Terrain Cargo Package ($350) consisting of a retractable cargo shade and a cargo net. All-in, our 2017 GMC Acadia rang the register at $47,465.

Others in this size class are in the same pricing neighborhood. The Nissan Pathfinder has a starting price just shy of $30,000 like the base Acadia front-wheel drive model. Optioning it up with all-wheel drive, leather seats, and navigation in top-end Platinum trim will quickly put the price into the mid-40s, but it doesn’t drive nearly as nice as the Acadia. The Ford Edge is a good driver, especially in Sport trim. Its Titanium trim is comparable to our Acadia SLT-1 All-Terrain tester and can be bought cheaper, but it’s slightly smaller than the Acadia and, in our opinion, not nearly as attractive. A Jeep Grand Cherokee Overland edition carries about the same amount of style panache as the 2017 Acadia and costs about the same, but won’t offer three rows of seating if you need that feature. 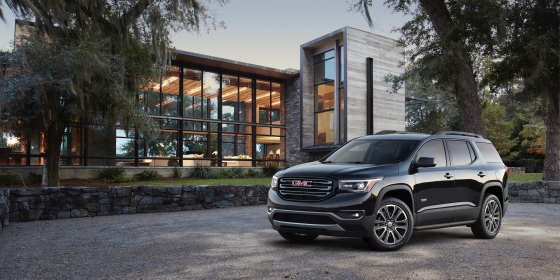 The GMC Acadia competes in the heart of the near-premium midsize crossover market, and it’s a damn sight more compelling there than it was in the full-size crossover market. Bigger, in the case of this model, was not necessarily better.
Time will tell whether shoppers in the segment think the same thing. But based on the number of eyes ogling our 2017 GMC Acadia tester, we’d say it makes a good first impression.

Disclosure: GMC provided the vehicle, insurance, and a tank of gas for this review.