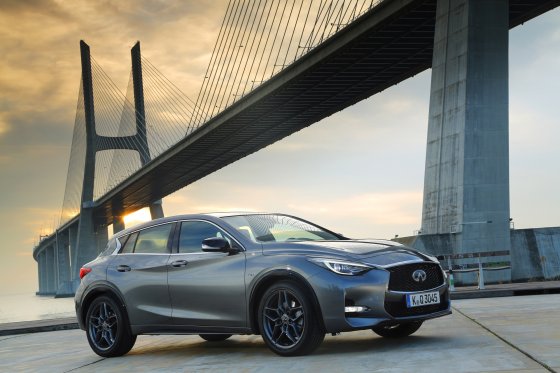 Subcompact crossovers are the hottest segment in America today. One could argue it all started with the Nissan Juke, then blew up after Buick decided to give it a try in the near-luxury end of the pool, with their Encore shattering most expectations in the sales race. So now the luxury automakers are getting in on the subcompact crossover craze. One of the most interesting entries is the 2017 Infiniti QX30 Sport, which we recently sampled for a week.

Every car has a backstory 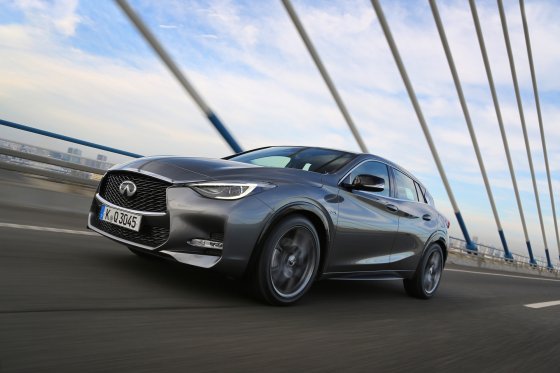 See, Mercedes and Nissan got together a few years ago and agreed to share technology and powertrains, which has particularly come to fruition on small cars. As part of the agreement, Nissan builds engines for some Mercedes vehicles in Tennessee and gets access to Mercedes chassis and in-car infotainment tech for some of its own models.

The agreement has been in-force for seven years now, bearing some fruit abroad. For example, there’s the second-generation smart fortwo and its not-in-America four-passenger forfour variant. Both are now closely related to the Renault Twingo, which is closely related to Infiniti parent Nissan because Nissan is half of the Renault-Nissan Alliance. 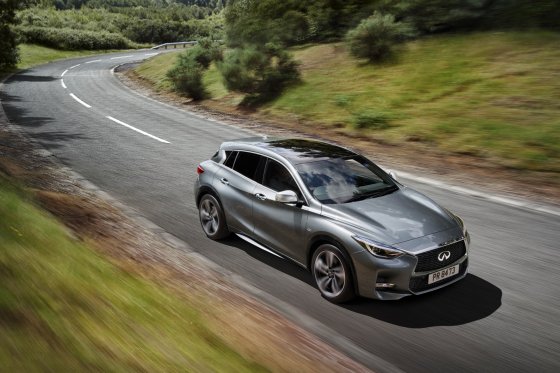 We know, it’s complicated. But one of the first clear byproducts of this agreement that we’ve been able to lay hands on in America is the Infiniti QX30, which is a close cousin to the Mercedes-Benz GLA Class.

This is where we remind you the QX30 has a lower-riding sister elsewhere in the world, known as the Q30. We don’t get that here — yet. Think of it as a more traditional hatchback, where the QX30 looks more like the small crossovers that do so well here. Taller ride height is its main differentiating feature. The Q30 has a cousin in the Mercedes-Benz A Class hatchback, which also is not available in America. But you can buy the GLA here. 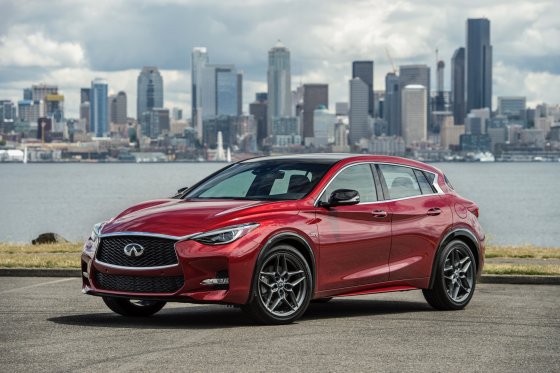 It leads with Infiniti’s new grille design, not quite as polarizing as that “spindle” design from fellow Japanese luxury rival Lexus. There’s a pair of headlights that looked a lot like the ones on the Q60S sports coupe, and a huge Infiniti logo.

The side view of the 2017 Infiniti QX30 is all dramatic swoops and creases, implying a sense of speed and sportiness. Most notably, a long, flowing crease arcs up from the headlight lens and swoops back down through both door handles on its way to meet the taillight lens. Infiniti’s signature quarter-moon kink is there in the rearmost part of the chrome trim surrounding the side windows.

At the rear, the Infiniti QX30’s taillights somewhat reprise the headlight shape and are connected by an upward arch with chrome trim. The license plate opening looks like the inverse of the grille shape. The hatch has a relatively small glass area, owing to the car’s sporty roof profile that slopes downward from front to rear. 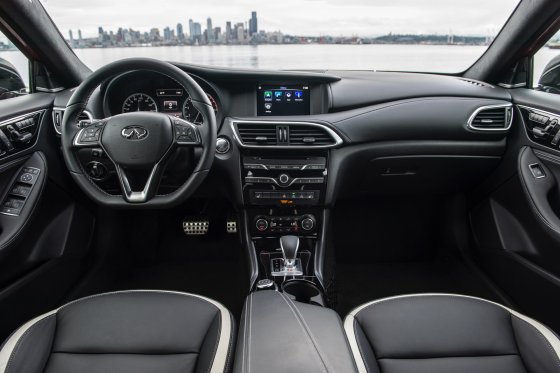 The interior of the 2017 Infiniti QX30 we tested was where we saw the most evidence of Mercedes blood in its veins. The dashboard gauges, the cruise control stalk, the door-mounted seat adjustment controls, the weird plastic key, and even the telltale “bong” door-ajar chime are straight out of any modern Merc. The shift lever for the seven-speed dual-clutch automatic transmission was almost identical to the one in the Mercedes-AMG CLA45 we reviewed a few months ago.

The front seats of our tester were supportive and sporty, covered in black leather with white accent inserts and white stitching. Interestingly, they were one-piece seats with no adjustment of the headrest, almost like race seats. The back seat was tight for adults but worked OK for two children under the age of six. Scooting the front seats up for these rear-seat passengers — particularly in front of the youngest, who rides in a rear-facing car seat — made front seat space a bit cramped for adults.

The cargo area was a bit of a squeeze for the weekly grocery run. Infiniti specs say the QX30 has 19.2 cubic feet of space in the way-back, but the sloping hatch profile made it seem less spacious.

That said, the interior of the QX30 seemed like it was screwed together very well. There were no annoying creaks or rattles. Doors opened and closed with a machined precision that some other Infinitis — we’re thinking of the Q70L we drove recently — fail to display. Here is where we mention, however, that the driver’s interior door handle seemed to need adjustment. It felt gummy and slow to release the door latch, where the other doors had that tight, nicely machined feeling.

The one real letdown inside the QX30S was the mostly-Nissan/Infiniti infotainment system, which was somewhat confusing to use and lacked Android Auto/Apple CarPlay integration. Mercedes’ COMAND infotainment system can be distracting and confusing to use at first, but we’d rather have that setup here. At least we know M-B can do Android and iOS integration well, based on our time in the AMG CLA45. 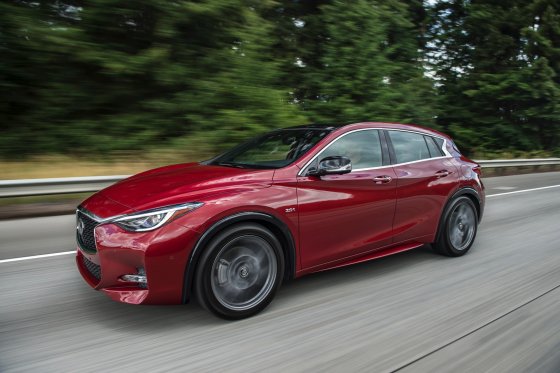 A test drive will do a lot to sell the QX30 on those considering it among the fleet of small crossovers. There’s no Honda HR-V or Buick Encore that can match the level of driving engagement offered here. Dare we say it, even the similarly priced Lexus NX200 has its work cut out for it in providing this much fun behind the wheel. 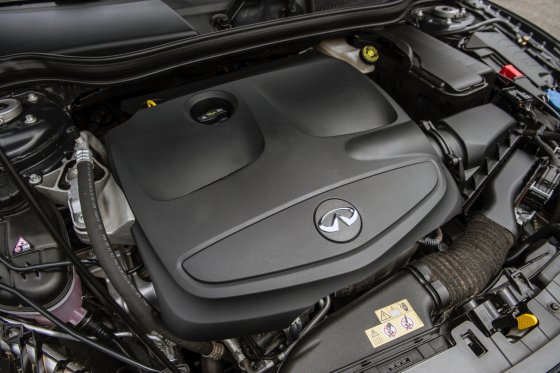 That flat torque curve provides for a healthy shove in the back any time you call upon the throttle, but it isn’t too taxing in terms of fuel economy, either. EPA rated our front-wheel drive QX30 at 24 MPG city, 33 MPG highway, 27 MPG combined. Our mostly highway-driving experience slightly beat the combined number, ringing in at 29 MPG over a week. Those who opt for the all-wheel drive version of the QX30 will face a slight penalty in fuel economy, at 21 city, 30 highway, 25 combined.

The seven-speed dual-clutch automatic transmission was more refined than many of its kind. There was no herky-jerky feeling of clutch-slippage at low speeds, such as when parking or crawling in city traffic. Highway shifts were nearly imperceptible under light throttle, or more pronounced if given a heavy right foot. 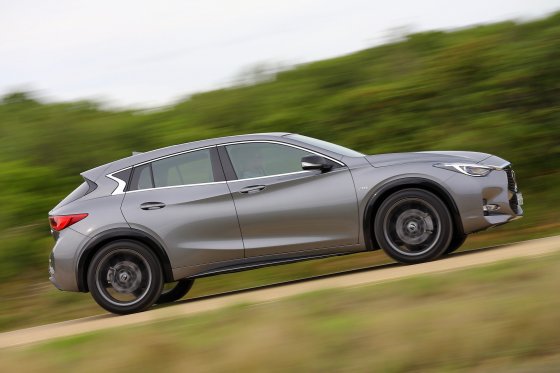 If mass-market automakers are going to use dual-clutch transmissions in cars like, say, the Hyundai Elantra Sport, then they need to study how Mercedes and Infiniti built and programmed the transmission in our QX30. It’s the standard by which we will judge dual-clutch transmissions in the future. The steering wheel-mounted shift paddles aren’t standard-bearer quality — they felt plasticky and cheap, if we’re honest — but at least they executed crisp shifts without delay.

Steering feel was pure Mercedes. We say this because of that Infiniti Q70L we mentioned earlier. In that car, the steering feedback was strange. It was overboosted and numb to drive on smooth roads, yet road imperfections were transmitted up a seemingly hollow-feeling steering column.

While that was a good effort at steering feedback on Infiniti’s part, the QX30S was much better. It had tighter feel and feedback, and steering effort loaded up much more naturally as we cranked the wheel into a turn at-speed. The feeling was reminiscent of the Mercedes-AMG CLA45, only not quite as quick-turning or as heavy. 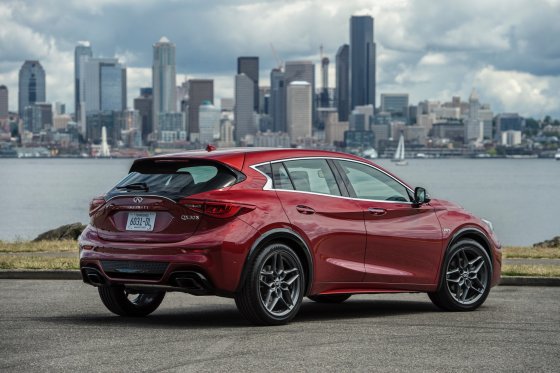 With an as-tested price of $43,735, our 2017 Infiniti QX30 Sport is definitely more premium than most of the subcompact crossovers we’ve named in this review. A Nissan Juke starts at less than half that, for example. A fully loaded Buick Encore will likely be quieter and still ought to ring in about $10,000 cheaper. But none of those provides the level of luxury and driving excitement offered by the QX30 Sport.

None of those is as satisfying to look at, either. The QX30 has a sexy design that caught a lot of compliments during our week test-driving it in the rural hills of Tennessee. It takes a special kind of person to fall in love with the design of a Juke or an Encore, both of which get noticed more for their weirdness than for their sex appeal. The QX30’s design stirs something primal in the blood that makes you want to experience it.

There’s a big payoff for those who do experience the Infiniti QX30 Sport, too. It’s satisfying to drive in a way few subcompact crossovers are. It makes you want to heed the words of Supertramp and take the long way home.