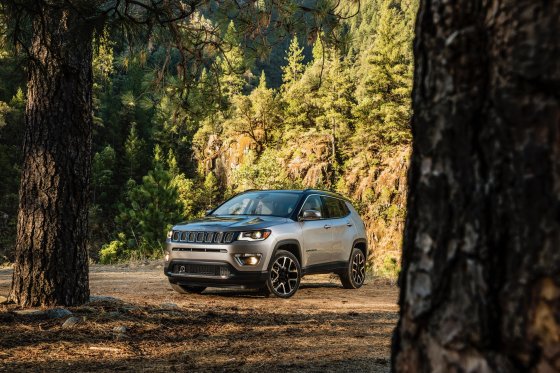 When the Jeep Renegade came out a couple of years ago, it really stole the thunder of the Jeeps that used to be the smallest in the lineup: the Compass and the Patriot. It also laid bare the unnecessary duplication of effort. The Renegade slotted in naturally below the compact Compass and Patriot, yet the Compass and Patriot were both compacts with slightly different designs. Why have two compacts in the lineup when they’re basically the same under the skin? Nobody had a good answer for that.

So Jeep got to work designing a new compact crossover to replace those two models. There was the issue of what to name it. We liked the idea of combining both former models’ names to form Compatriot. But Jeep decided to ditch Patriot altogether and keep the Compass name for this all-new model.

To say the 2017 Jeep Compass we drove is an improvement over its previous-generation namesake would be damning it with faint praise. The new Compass takes all of the things we liked about the Renegade and wraps a slightly larger, more practical body around it all. 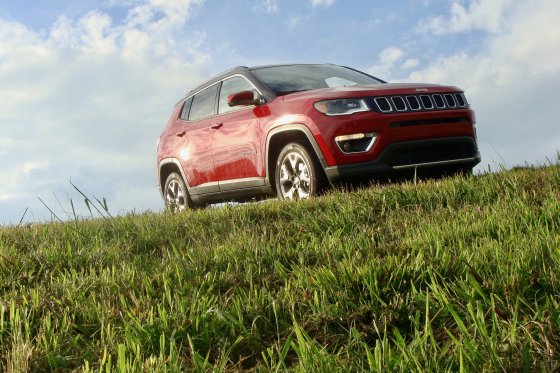 The 2017 Jeep Compass we drove was a Limited trim, and came across as a slightly smaller Jeep Grand Cherokee when we first saw it. We actually liked the design more than the slightly larger Cherokee, which can be somewhat polarizing. 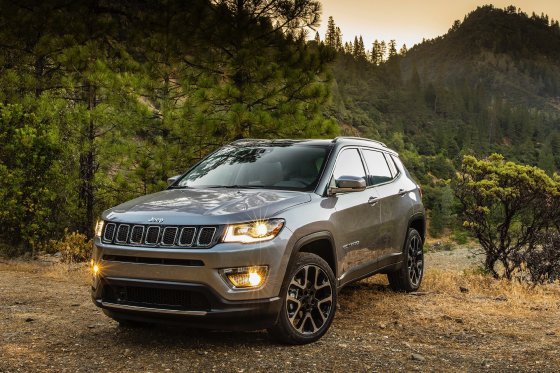 Up front, the Compass had a wide seven-slot grille between the two bi-xenon HID headlights, a large front bumper with integrated fog lights, and a sloping hood with a couple of elegant creases that strengthen the design. Plastic cladding lined the lower fascia to provide both a dose of SUV ruggedness and protection from unimproved terrain. 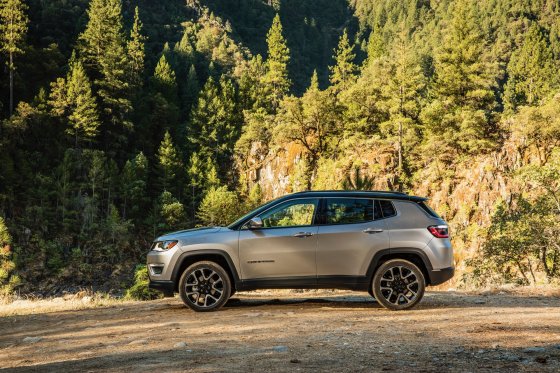 The side view had squared-off wheel openings that bulged a bit from the body, giving the Compass a bit of muscle. The side windows were large, with the lower sill of the rear window jutting upward at the rear to provide a sense of motion and agility. An accent crease came up from the front wheel opening and bisected both door handles before terminating at the leading edge of the taillight.

The roof was mostly glass, with the metal parts finished in black paint that contrasted nicely with the Redline Pearl Coat paint on the rest of the body. The roof sloped downward a bit toward the rear and featured a nice chrome strip that accentuated the roofline when viewed from the side. Plastic cladding continued at the bottom edge of the car under both doors, and it lined the edges of the wheel openings.

The rear was nicely put together, with the rear glass appearing to wrap around part of the D pillar thanks to the extension of the black paint from the roof. Well designed taillight modules sat just below the rear glass. The black plastic cladding was broadest in the rear bumper area, but there’s a little chrome strip to break it up. 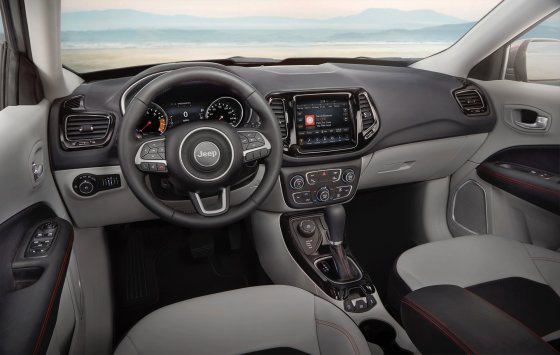 Inside, the 2017 Jeep Compass Limited we tested was full of leather seats and ease-of-use. The front seats reminded us a lot of the Renegade Trailhawk we tested a year ago. They were comfortable and well-styled. The rear bench seat split 60/40 and featured the same attractive design as the front seats. There was plenty of legroom back there for two kids without much sacrifice of legroom up front. Jeep’s official specs said the Compass had 41.8 inches of legroom up front and 38.3 inches in the rear.

The dashboard design was clean and simple, yet attractive. Everything was within easy reach, including the 8.1-inch Uconnect infotainment screen and the two-zone HVAC controls. We would have liked the volume and tuning dials to be closer to the screen instead of sitting right on top of the HVAC controls. It was easy to reach over trying to adjust the temperature and turn the radio up or down instead. With more time in the seat, we might have gotten used to the pushbutton temperature adjustment.

Cargo space was pretty good. Behind the rear seats, there was 27.2 cubic feet to store stuff. We hauled a few hundred newspapers back there one day, and later in the week, we used it to haul groceries for a family of four. No problems fitting either in the cargo area with all seats upright. The Jeep Compass has a pretty upright rear hatch, which helps maximize cargo volume on a relatively tidy overall length of 173 inches. If we had needed more cargo room, laying down the rear seats gives the Compass 59.8 cubic feet of space for hauling. 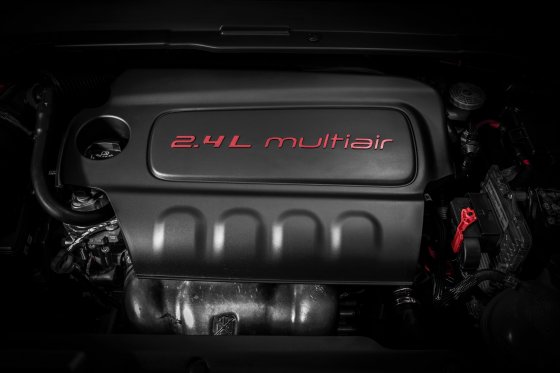 The engine put power through Jeep’s ZF-designed nine-speed automatic transmission, which performed well in our use and helped keep the engine in its happy place. It downshifted into its powerband quick enough when we needed to hurry up and pass someone, and it was plenty long-legged in its top three gears to enable relaxed, efficient highway cruising. We experienced none of the harsh shifts or gear-hunting some reviewers have complained of with this transmission. It is far nicer to drive than the CVT-equipped previous generation of the Compass. Maybe we’re just not expecting it to shift like a sports car? 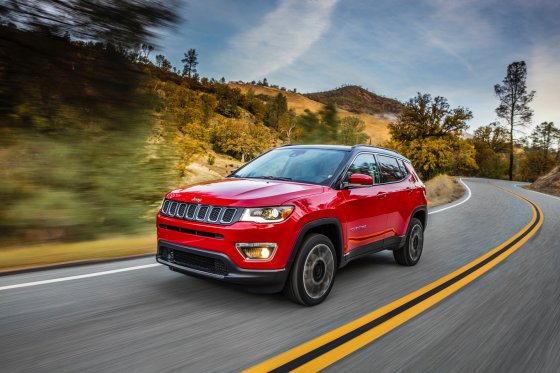 The fuel economy was pretty impressive. With more than 450 miles on the tripmeter, we were averaging 27 MPG. So in that regard, the pairing of engine and transmission worked out well. That’s actually better fuel economy than we got in the smaller Renegade Trailhawk, which had the same powertrain setup but admittedly did a little more off-road crawling than we did in the Compass.

The Compass had nicely tuned suspension just like the Renegade, however. It was soft on the highway, so it was not sporty handling at all. But it was not cumbersome to drive on curvy roads, either. It soaked up potholes and gravel roads with confidence and without jarring our spines. The rougher the going, the more the Jeep Compass seemed to be in its element, which is not something we can say for most of its competitors.

The steering feel was a notch above many compact crossovers such as Nissan Rogue and Toyota RAV4. In those competitors, the steering is almost totally numb and does little to communicate with the driver. The Jeep Compass didn’t have the steering feel of a sports car, but it had more feedback than most of its competition. 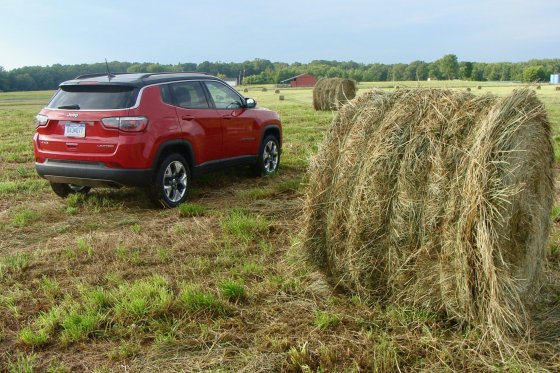 The Compass is another of many FCA vehicles we have driven where the basic blocking-and-tackling of chassis design is very well done. The doors close with a precisely machined click befitting a Mercedes — impressive for a Mexico-built Jeep that starts at $21,000. Driven up and down some steep terrain transitions in a hay pasture, the Compass displayed almost zero chassis flex even when we managed to put one wheel in the air. The cabin remained free of annoying rattles and noises, the lone exception being something that sounded like plastic-on-plastic scrape when turning the steering wheel to its extremes. That was probably a minor trim fit issue, if we had to guess.

Our Compass was equipped with Jeep’s SelecTerrain system that allowed us to fine-tune the traction control for different surfaces. It could be set to Auto, where we left it all week because we didn’t do much off-road driving. Alternately, it could be set to Sand, Snow, or Mud as conditions dictated. 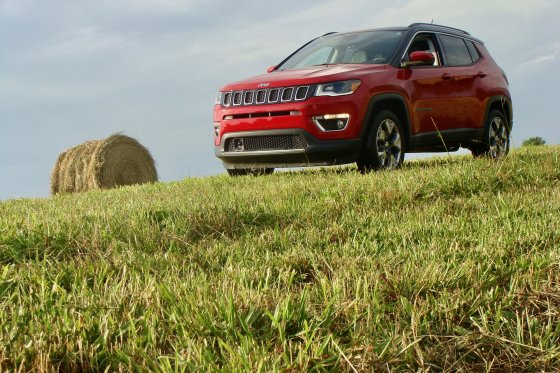 You can get into a Jeep Compass Sport for as low as $20,995, according to Jeep. But to get into a leather-interior Limited like our tester will set you back at least $28,995. Our tester added the following:

That’s a little more expensive than some similarly equipped competitors such as the Honda CR-V or the Toyota RAV4. But here’s where the Jeep Compass beats them: Off-road prowess, where it has a 4×4 drive system worthy of its Jeep name and a little more ground clearance, and infotainment, where the huge 8.4-inch Uconnect screen with Android Auto and Apple CarPlay connectivity make it the best in the segment. Beats Audio wasn’t bad, by the way, but we thought it should have more customization available than the three-band graphic EQ that was buried in the settings menu. 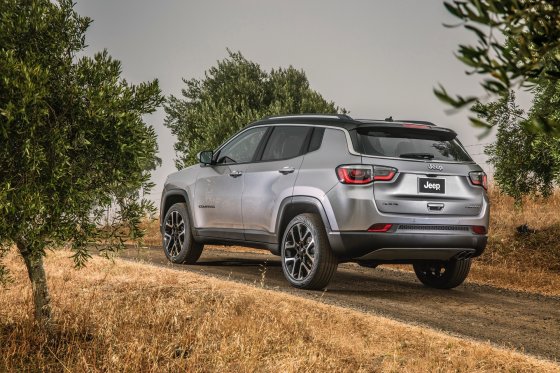 The 2017 Jeep Compass comes across looking a little like a budget version of the Range Rover Evoque. While it lacks much of the sporty on-road capabilities of that British crossover, the Compass is certainly more capable off-road than its primary competition from mainstream brands.

If you’re someone who values actual off-road capability and/or the most user-friendly infotainment experience, the Jeep Compass makes a strong case for the extra few dollars over its rivals. And knowing FCA dealers, Compass may have more discounts during fall clearance sales than its competitors.

As for us, we’d definitely consider the Compass if we were shopping for a compact crossover. Its actual off-road capability of the 4×4 Compass makes it more appealing to us than its all-wheel drive compact crossover competitors, most of whom really don’t want to leave the pavement. Its rugged mini-Grand Cherokee good looks don’t hurt, either.