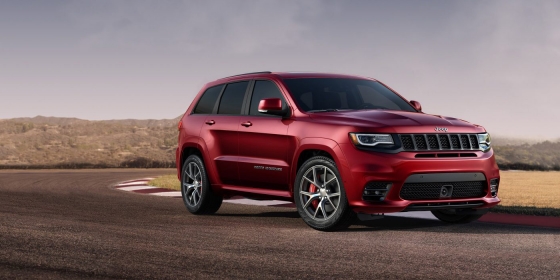 Perhaps you look at the burgeoning SUV class and say, “I like Jeep because Jeep has a long history in this genre.” Perhaps then you look to the Jeep Grand Cherokee, the top of the model range, and say, “Sure, it’s attractive, but I want one with more cajones.” 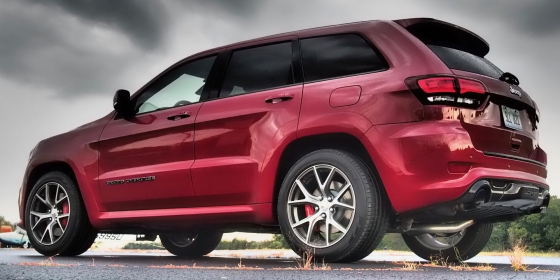 The vast majority of Jeep Grand Cherokees you’ll find at your local Jeep dealer are powered by the 3.6-liter “Pentastar” V6 gasoline engine. No turbocharging, no hybridizing, no bullshit. It’s a fine engine for its purpose in life, making plenty of juice for the average Grand Cherokee buyer and returning OK fuel economy. Plus, the fact that it’s used in just about every V6-having FCA product helps keep the cost of entry reasonable.

For the eco-minded, Europhiles, and fuel-misers, there might be one or two Jeep Grand Cherokee EcoDiesels on the lot. Those get a small V6 diesel engine that, while slightly slower on the uptake, delivers up to 30 MPG highway — unheard of in this class of SUVs in America. 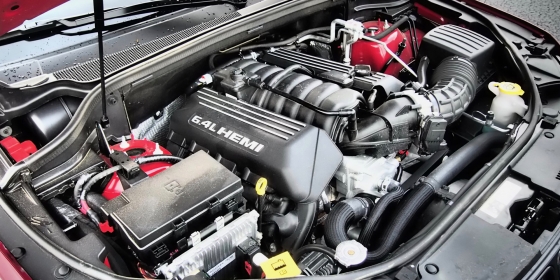 Those are fine engine options. But under the hood of the 2017 Jeep Grand Cherokee SRT is the magnum opus: the same 392-cubic inch HEMI V8 one can find powering the Dodge Challenger SRT 392. With 475 horsepower on-tap, it means business. It makes all the right sounds. Every autojournalist has used the term “loud pedal” at one point or another to describe the throttle, but in the case of the Grand Cherokee SRT, it makes sense — its exhaust roars to life with a hearty stab of the right foot. 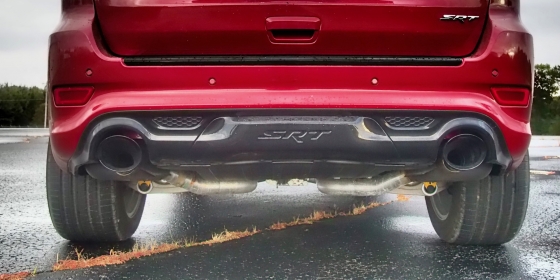 There are 470 ft-lbs of torque available, too. That’s plenty, whether blasting down the dragstrip or dropping the jaw of the guy in the loud-mufflered Mustang at every stoplight in town. In day-to-day scenarios like that, the 5,100-lb Grand Cherokee SRT will embarrass many a sports car. We give a partial hat-tip here to the eight-speed automatic transmission that will keep the HEMI in the heart of its fat torque curve until the driver relents.

At all other times, that transmission is trying its best to keep things civil — surely a monumental task. It will default to relaxed cruising under light throttle pressures, keeping revs low. A cylinder deactivation system will see the HEMI operate on half its cylinders at times like this as a further fuel-saving measure. It’s not uncommon to see the instantaneous fuel economy readout showing 30+ MPG on flat stretches of highway. Pull a long hill or stop at a traffic light, however, and that quickly changes. Our Jeep Grand Cherokee SRT tester averaged a trip computer-calculated 15 MPG over a week’s time. But then, nobody buys an SRT anything in the name of saving gas money.

Belly of the Beast 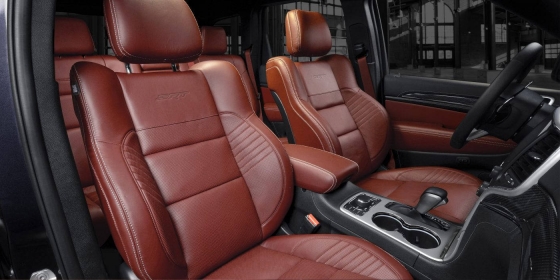 The interior of the 2017 Jeep Grand Cherokee SRT is lined in leather and carbon fiber aplenty. The front bucket seats are firm, and they feature a wide, central stripe of Alcantara lining that grips better than slick leather surfaces. The driver seat features four-way lumbar support. Rear-seat passengers get a bench also covered in leather-and-Alcantara as well as a rear-seat entertainment package in our tester that provided two flip-up screens — one in each front seatback — that would play Blu-ray movies from a disc drive located in the front center console. Both front and rear outboard seats are heated. In addition to dual-zone automatic climate control for the front seats, rear seat passengers get a pair of vents in the console. 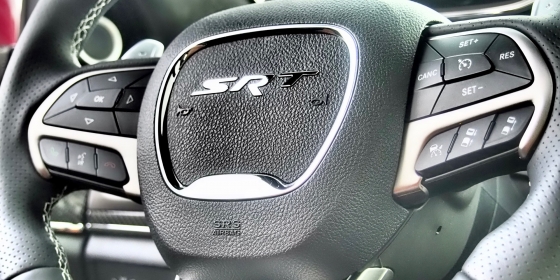 A thick-rimmed steering wheel keeps the driver’s hands happy. It also houses controls for the Grand Cherokee SRT’s radar cruise control system — and trust us, you’ll want to use cruise when you hit the highway. The SRT will run away with an inattentive driver on the highway.

If you’re hauling the five-passenger capacity of the Jeep Grand Cherokee SRT, don’t be afraid to pack your bags. There’s a plentiful 35.1 cubic feet of cargo space behind the rear seats. And if you’re alone or hauling just one passenger, you might very well take your entire wardrobe with you and still have space for souvenirs you pick up along the way: With the rear seats folded flat, you’ve got 68.7 cubic feet of cargo space. Jeep even thoughtfully provided a rechargeable LED flashlight in the cargo area that stows flat near the rear hatch, should you need it.

Underneath all the interior niceties, Jeep has massaged the Grand Cherokee suspension for street-pounding duty instead of trail-readiness. Also, in place of the Selec-Terrain dial in the center console, Jeep has a dial that allows the driver to select from seven drive modes: Auto, Sport, Track, Snow, Tow, Eco, and a Custom position that will allow the driver to mix-and-match settings from all of the above. Track is, shall we say, very firm, and it features the snappiest throttle, brake, and steering response of the lot. Eco, of course, is the farthest the Jeep Grand Cherokee SRT goes in the opposite direction, but it’s still quicker than its non-SRT sisters. 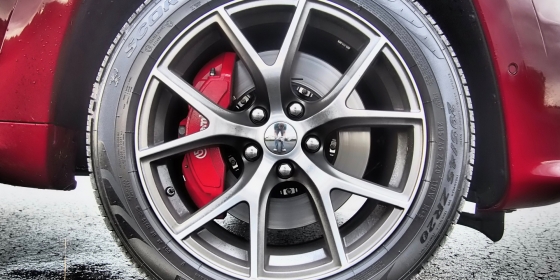 Brakes are from Brembo and are suitably enormous — 15 inches front, 13.8 inches rear. The front brakes are clamped by six-piston calipers, while four-piston calipers do the job out back. Where the HEMI and eight-speed transmission pin your guts to your back, these brakes will gladly sending them flinging into the front wall of your belly. That’s something we learned both in our brief brake testing on the wide-open tarmac of an airport and when the SRT’s radar sensor warned us we were approaching a stopped vehicle too quickly. 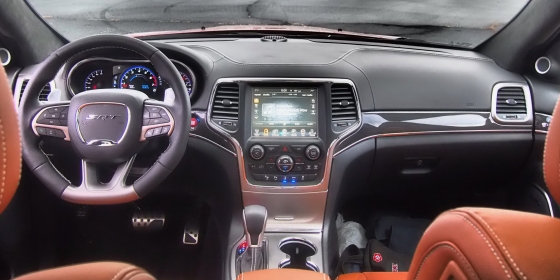 Our 2017 Jeep Grand Cherokee SRT was equipped with an audio system that had plenty of bite. The 19-speaker Harmon Kardon setup pumped out a cacophony of sound equal to the music of the HEMI thanks to its 825 watts. We found it fitting that a Jeep with such a high-performing powertrain should also have a high-performing audio system. 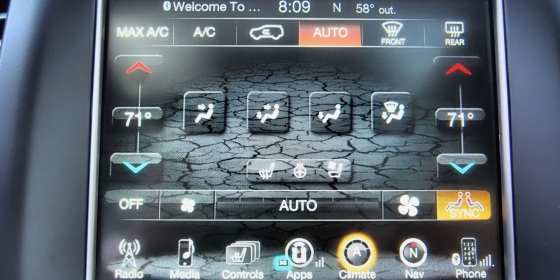 The interface for controlling all that audio power was FCA’s Uconnect, which continues to be among the easiest-to-use infotainment setups on the market. The Grand Cherokee SRT featured the largest implementation, at 8.4 inches diagonal, so it was missing some of the tactile buttons for main feature areas such as phone, audio source, and navigation that smaller-screen Uconnect head units often have. Much of this functionality is moving toward voice commands, anyway, and the Grand Cherokee SRT had good voice recognition capabilities.

Perhaps the most impressive thing about the infotainment setup on the Grand Cherokee SRT, other than its audio bombast, was its ability to give the driver a full telematics rundown of the vehicle’s performance. There was a built-in lap timer, a range of acceleration timers, a braking distance measurement, timers for eighth- and quarter-mile drags, a g-force measurement, a top speed recorder, output monitors for engine horsepower and torque, individual tire pressure monitors, and gauges for intake air temperature, oil pressure, oil life, transmission temperature, and battery voltage. 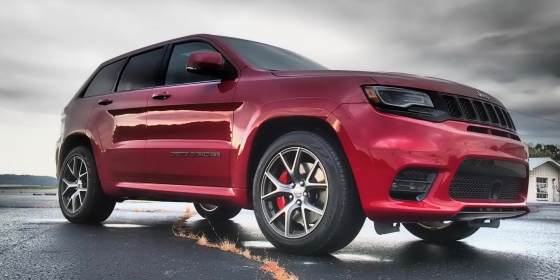 You won’t get into the kind of performance credentials offered by the Jeep Grand Cherokee SRT without spending much, much more money on a European vehicle. There’s the BMW X5M, for one, but it’s another league higher in price — nearly $100,000 to start. If you’ve got that kind of coin, you could buy both this fully loaded Jeep Grand Cherokee SRT and the Jeep Renegade Trailhawk we tested a few weeks ago for those times you feel like going off-road, plus have a nice stash of leftover change to do some aftermarket add-ons to both. But if you’re the “buy American” type, nobody else does this. Jeep is the only American manufacturer offering this kind of muscle in an SUV. 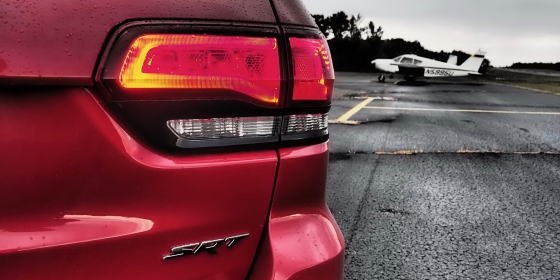 Perhaps that’s because producing an SUV with cajones this big takes, well, big cajones. Whatever the reason Jeep is in this muscled-up SUV market, we’re glad a beast as mean and memorable as the 2017 Jeep Grand Cherokee SRT exists.