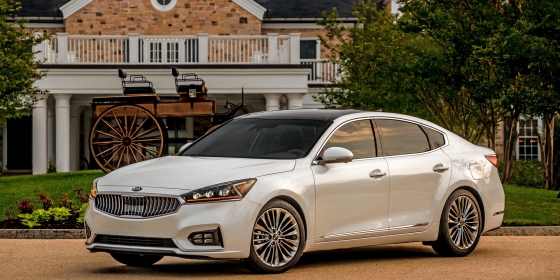 The Kia Cadenza has been completely re-designed for 2017, and boasts higher levels of luxury, technology, and convenience than its predecessor. When we first met the Kia Cadenza back in 2013, the brand was positioning it as a premium elevation, moving the company upward in the scale of price and luxury. Followed by the K-900 in that respect, the Cadenza was probably a bit miscast as a low-end luxury competitor, but was still considered a success by the team at Kia. Now with this 2017 update, the brand was careful to position the Cadenza where it probably belonged all along, in the Full-Size Sedan segment with competitors like Toyota Avalon, Nissan Maxima, and Chevrolet Impala.

We were recently invited to the fabulous Salamander Resort in Middleburg, VA to get acquainted with the second generation of Kia’s full-size sedan. For a taste of our experience with the Cadenza in Virginia’s horse country, check out the quick video below :

So what’s new with the second generation Cadenza, and what did we think after driving it? Read on to learn more about the new Cadenza, which was designed inside and out at Kia’s California design studio. 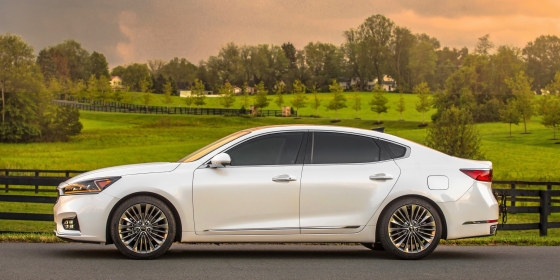 Peter Schreyer, Kia’s Chief Design Officer, has a principal design philosophy described as, ‘the simplicity of the straight line.” While it may be a bit tough to see in the image above, that philosophy is exemplified by a the single contour line that spans the length of the new Cadenza, creating its sleek profile. That line connects to unique matching Z-Shaped lighting signatures in the headlights and tail-lights (which you can see in detail below).

The new Cadenza has the same overall length as the outgoing model, but they’ve made it slightly wider and lower in height. The wheelbase has also been stretched slightly and the roof-line has been extended rearward more than two inches. The result is a more confident, stable, and sporty stance.

For us though, the biggest changes come in the re-designed front fascia of the Cadenza, where Kia’s signature “tiger nose” grille has been given a concave implementation for the first time. While we love the new grille, we wish it hadn’t been connected visually to the new headlights as aesthetically we preferred those two elements separate as they were on the previous model.

We’ll also note that the Cadenza includes another Kia signature, the “ice-cube” LED fog lights, which disappeared on the most recent Optima, but now triumphantly return with the Cadenza. We have a feeling the popular design element will return on future updates to the Optima as well. 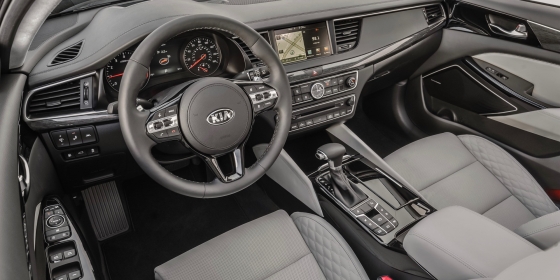 The interior of the 2017 Kia Cadenza is a very pleasant place to spend your time, with higher quality materials than the preceding model, and higher levels of craftsmanship throughout. Much of the visually widened interior cockpit layout is similar to the recently updated Optima, and we’re going to assume that is on purpose. There are four interior color combinations available, and we’re quite fond of the two-tone options featuring Nappa leather like the white and black combo you see above. The seats are adjustable in numerous ways, and include improved heating and cooling abilities.

The original Cadenza was bursting with technology, but the new model has been improved even further by offering features like a Head Up Display, which shows both speed and navigation directions. It also offers improved safety camera features for reverse and birds-eye view. Driver assistance features include Advanced Smart Cruise Control, Forward Collision Warning, Autonomous Emergency Braking, Lane Departure Warning, and Smart Blind Spot Detection. We absolutely love the Head Up Display and Advance Smart Cruise Control, and hope we never need those other systems. 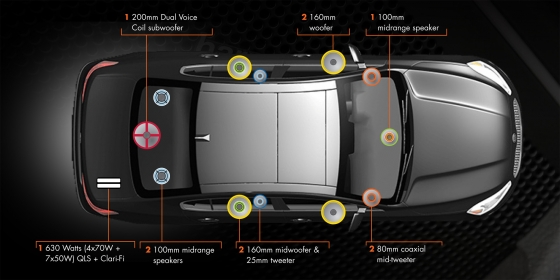 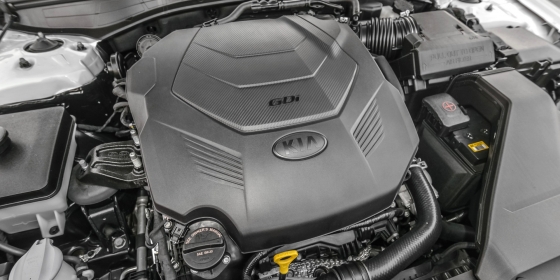 The Cadenza maintains the same 3.3 liter V6 engine, which has been re-tuned for improved fuel economy. It now provides 290 horsepower and 253 lb.ft. of torque via Kia’s first FWD-based eight-speed automatic transmission. The improvements there were noticeable, as shifts were quick and the driving experience was more engaging. Other major improvements include a stronger, lighter, and more rigid body structure which combines with a more responsive 32-bit electronic steering system, re-tuned suspension, larger brakes, and that new transmission to greatly improve driving dynamics. We drove the Cadenza on the winding mountain roads of Shenandoah National Park and the improvements were readily apparent, although it was still clear that we were driving a full-size sedan with the limitations that you would expect.

While the 2017 Cadenza offers a better ride and handling, it also features very noticeable improvements to limit road noise. Additional acoustic absorbing laminate in the front windows and windshield reduces wind noise, while a full floorpan undercover quells road noise. Together with increased insulation around the A-­pillars, NVH levels have been substantially reduced, resulting in a more serene cabin so you can fully enjoy that Harmon/Kardon system. 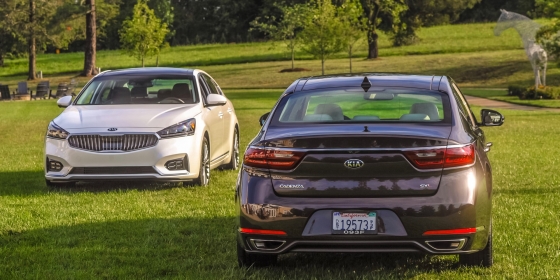 Let’s be clear, Kia hasn’t sold a large number of Cadenzas; the number is about 28,000 since its late 2013 launch. The first model Cadenza was about elevating the brand and proving that Kia could build a premium full-size sedan. That mission was accomplished and that point is further proven with this new model.

Kia is in the business to sell cars though, so this updated Cadenza must begin to move off showroom floors. While conquesting other brand’s buyers is the goal and a definite possibility, we think the new Cadenza will also capture the attention of current happy Optima drivers. Over the past seven years, Kia has sold a ton of Optimas, and we see them on the road everywhere we go in our own long-term loaner Optima. As those owners look to make their next purchase, this refined Cadenza is perfectly poised to serve as a natural upgrade.

The 2017 Kia Cadenza is expected in dealerships at the end of October and pricing will start at below $32,000. While it’s certainly well equipped at that price, we drove the fully loaded SXL model which will set you back a competitive $44,000. We’ll finish this review with the same words we used when reviewing the previous model. “We’re fans of change, of upsetting the status-quo, and spending our money wisely. So even though we’re not in the target demographic for the 2017 Kia Cadenza, we definitely recommend giving it a test-drive to anyone who is.”