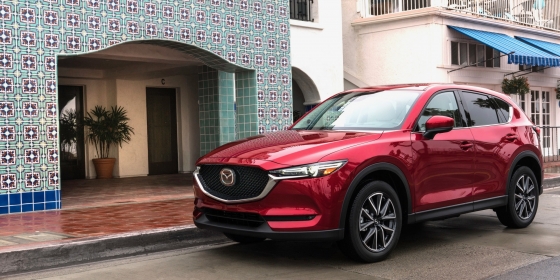 It’s no secret that the CX-5 has been a runaway success for Mazda. Since its introduction for MY2013, the compact crossover has received numerous accolades from automotive media, and has climbed to the top of Mazda’s sales chart. Demand for the CX-5 hasn’t waned as the first generation model aged either, instead its sales have increased every year it has been on the market, as consumers continue to flock to Mazda’s KODO & Skyactiv pioneer vehicle. That growing popularity makes the release of the second generation CX-5 arguably more important than the highly publicized MX-5 Miata reboot. When a manufacturer updates their highest volume model, getting it right is critical to securing trade-in sales from current happy customers.

The 2017 Mazda CX-5 was unveiled at the 2016 Los Angeles Auto Show, and we were recently invited to San Diego to be among the first to drive the next generation of Mazda’s sales leader. For a taste of our experience with the CX-5 in America’s Finest City, check out our video below, followed by our review: 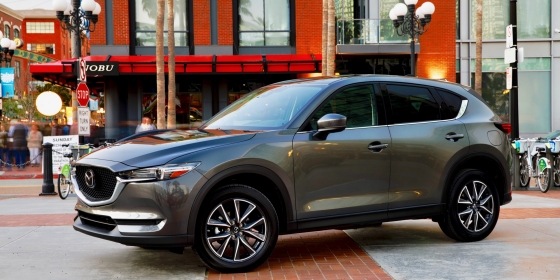 At first glance, to the uninformed eye, you’d be forgiven for not realizing that the photo above is the 2017 model instead of the 2016 model. You’d be even further forgiven for thinking that it was the new CX-9. While there are definitely many exterior changes for 2017, the CX-5 is still unmistakably Mazda, and an evolution of the KODO design. If you liked the aesthetics of the outgoing model, there is likely nothing here that is going to offend you. However at the same time, this update feels modern, fresh, and new. The design is in fact all new, but some signature shapes and elements have been preserved to maintain that family resemblance.

Available exterior highlights include a power rear liftgate, 19-inch alloy wheels, and extensive use of LED lighting (headlights, foglights, and signature taillights). While the Machine Grey Metallic color shown in these photos is rather sharp, we were particularly delighted by the new Soul Red Crystal paint color. We are not exaggerating when we inform you that there is nearly an entire page in the Press Kit dedicated to describing the paint color technology:

Soul Red Crystal was launched on the all-new CX-5, carrying the luster of a concept car paint finish but in a mass-production color. Using Aqua-tech Paint technologies, the water-based paint decreases waste and CO2 emissions versus previous technologies. In Soul Red Crystal, it carries 50-percent greater color “depth” compared with the previous Soul Red, as well as 20-percent greater brightness, with brighter reds in direct light and a charcoal-like effect in shadows, similar to flowing magma. 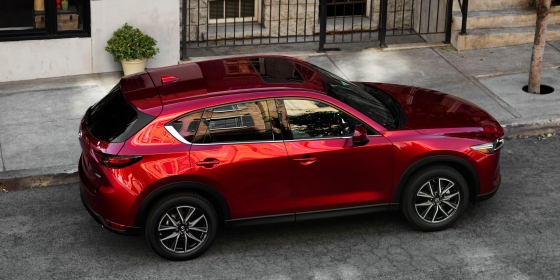 If you’ve ever wanted your car to look like liquid hot magma, apparently you’ve found your vehicle. The optional paint color will set you back an additional $595, but we must confess it is stunning. 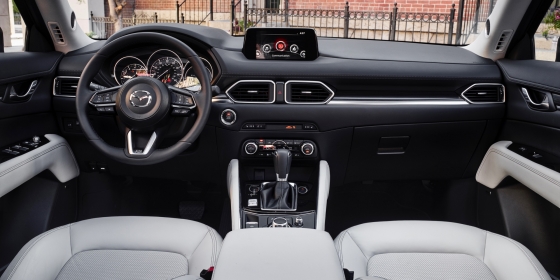 Like the previously updated CX-9, the interior is where the improvements to the new CX-5 are most apparent. They call the updates “Mazda Premium”, which feature a higher level of design, quality, and craftsmanship. You can feel it when you first sit down in the vehicle on the leather seats, and are surrounded by soft-touch high quality materials. We immediately noticed the aluminum accents throughout the cabin and overall found the two-tone interior you see in the photos here to be quite pleasing.

Extensive effort was put into making the ride much quieter in the new CX-5, a fact that was exhaustively illustrated to us in our pre-drive presentation. We’ll spare you all of the details, but we can confirm that their has been significant improvement to the road and wind noise entering the cabin, which adds to the premium feel of the vehicle.

In addition, Mazda was keen to point out some human-centric design elements that we’re not normally aware of when we drive, like their symmetrical and centered driver layout. Apparently being centered on the steering wheel and pedals is not as common in automobiles as logic would assume. In addition, a bottom hinged gas pedal is used, to match the natural motion of the foot and relieve stress on the driver. Those seemingly small ergonomic priorities contribute to the feeling that drivers get when they’re behind the wheel of a Mazda, which supports their marketing slogan; Driving Matters. 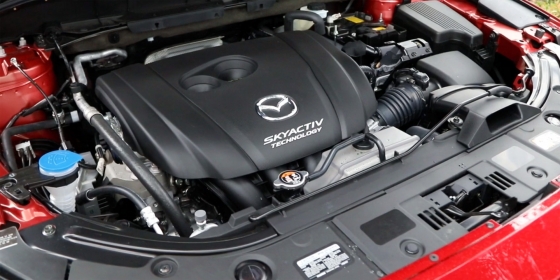 The 2017 Mazda CX-5 come standard with a SKYACTIV-G 2.5-liter four-clyinder, gasoline-powered engine, which produces 187 horsepower at 6,000 rpm and 185 lb-ft of torque at 3,250 rpm. It is paired with a six-speed SKYACTIV-DRIVE automatic transmission which has been improved with better throttle control and response. Estimated fuel economy in the front wheel drive model is 24 mpg city, 31 mpg highway, and 27 mpg combined. However we drove the i-ACTIVE All-Wheel Drive model, which will cost you an estimated 1 mpg at the pump, and $1300 at the dealer. We highly recommend that upgrade if you plan to use your CX-5 crossover for anything more exciting than grocery-getting. It uses sensors to calculate 27 different factors together to adjust torque to the wheels in response to road conditions. 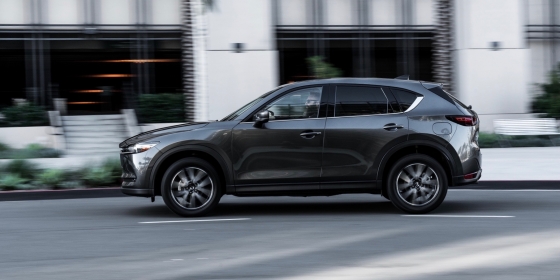 Driving dynamics in the CX-5 have always been a selling point, but they’ve been further enhanced in the 2017 model, starting with its 15 percent increase in torsional stiffness. The stiffer chassis allowed engineers to optimize the suspension to accentuate the benefits of Mazda’s new vehicle dynamics system, which is standard in all trims levels of the CX-5.

G-Vectoring Control (GVC) is an all-new, Mazda-exclusive, technology that uses engine timing to control chassis dynamics, leading to smoother, more accurate steering inputs. This results in greater confidence and control for the driver that the car does exactly what you want it to with every minute turn of the steering wheel or touch of the throttle. The introduction of GVC is another example of Mazda’s never-ending quest to enhance the Jinba Ittai—meaning “horse and rider as one”—driving experience, one that puts the driver as the priority in the design and development stages.

We can confirm that the 2017 Mazda CX-5 is even more fun to drive than its predecessor, which has traditionally been one of the main selling points for Mazda customers. 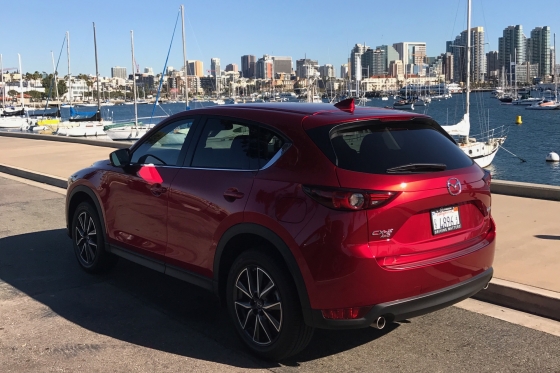 The 2017 Mazda CX-5 continues to be a remarkable value, starting at $24,045. Our fully loaded Grand Touring Premium AWD test model in Soul Red Crystal would cost you $33,120. Often manufacturers are reluctant to mess with success, and it can be difficult to improve upon a known winner. The CX-5 is indeed Mazda’s best-selling vehicle in the United States, but we think this update will only help to enhance that success. The entry-level CX-5 Sport remains competitively priced while offering core qualities that have made it a popular choice in the market. The higher trims (Touring & Grand Touring) offer premium upgrade options to current CX-5 drivers, who no doubt love their current vehicles but might be looking for additional creature comforts and features. We enjoyed our time in San Diego, and behind the wheel of the new Mazda CX-5, and think you will too. Mazda has another winner, arriving at dealerships in late March.