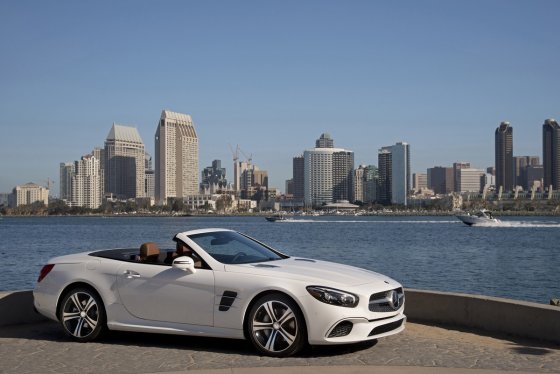 When you’re looking at a two-seat car that has a sticker in the six figures, you tend to expect the very best in performance, comfort, luxury, and excellence. Those things come with the Mercedes-Benz SL-Class. There are four models of the 2017 SL, starting with the SL450 that we drove and moving up through the SL550, AMG SL, and the AMG SL63.

The 2017 Mercedes-Benz SL is a touring roadster in the old school tradition, with comfort and the driving experience taking precedence. It has a suave exterior, a svelte interior, and smart design throughout. For 2017, the SL-Class has received a few exterior styling updates, a new transmission in two models, and power upgrades to engines. 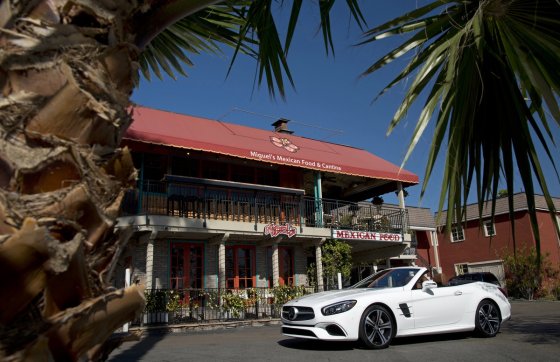 There is no mistaking the SL450 for anything but a Mercedes-Benz. A shark-like appeal to its design underlies the overall saloon styling with its long, roadster hood, heavy rear-end, and forward lean.

The most marked of the SL’s elements are the low windscreen, well-done hardtop stowage system, long hood, pointedly fast-paced front fascia, and general “low and fast” appeal. We love the way that the sharp nose, with its prominent Mercedes-Benz logo and slitted grille, gives way to the long hood and fast-angled windscreen. The rear of the SL is all business with a wide track, strong haunches, and beautiful deck that serves to both create a coupe design with the top up and a roadster style with the top down.

The roof raises and lowers with a push of a button on the center console near the shifter. It lowers into the rear deck with a complex, but fun to watch folding mechanism that retains most of the trunk’s space while stowing away the top and leaving a clean set of lines behind. When raised, the process reverses, and the roof sets into place and locks automatically. 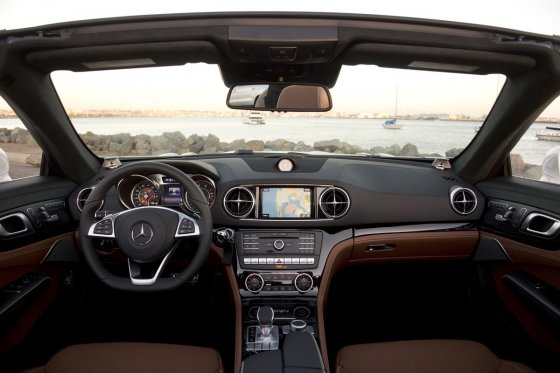 The 2017 Mercedes-Benz SL-Class has a comfort-focused interior that combines both the car’s excellent performance and its beautiful design. It’s roomier than most two-seat coupes, with a wider build and more adjustability to the seating than is found in most roadsters. Seating both tilts and slides with a lot of space being offered behind the seating to allow this. That space can also be utilized as storage for purses, jackets, etc.

Sun-reflective leather is standard in the SL-Class and it matches nicely with the flowing, wide-angled dashboard and extremely well-crafted interior. Seating is both heated and cooled and Mercedes added a nice touch with the optional “Airscarf,” a heated fan that blows warm air across the driver and passenger’s neck from the headrest. This makes it possible to comfortably drive the SL with the top down, even in cold weather.

Behind the cockpit is the trunk, which houses 8.5 cubic feet of space when the top is down and 13.5 with the top up. A nice touch is the roof lift added when the deck lid is opened to access the trunk. This lifts the stowed roof to give easy and full access to the trunk beneath and includes a button which allows the roof to be set down on top of cargo (gently) to make sure it will clear before actually closing the deck. Very nicely done, Mercedes! Hands-free trunk opening using just the swipe of a foot under the bumper is also available for the SL.

We note that while driving the 2017 SL450, we learned that the interior is unusually quiet for a convertible. With the top up, the well-made seals and heavy construction mean that the interior is as quiet as any luxury coupe we’ve driven. With the top down, the aerodynamics of the car allow the interior to remain relatively quiet in highway driving and the addition of the rear wind screen, which can be raised and lowered as needed, aids this at higher speeds.

The 2017 SL-Class includes the COMAND infotainment system from Mercedes-Benz as standard equipment. Two USB ports, Apple CarPlay, Android Auto, voice control, and Mbrace emergency telematics are standard equipment. Navigation is also standard and includes real-time traffic. The smartphone app integration is a bit limited, but most functions for the infotainment in the Mercedes-Benz SL are fairly easy to learn and use. 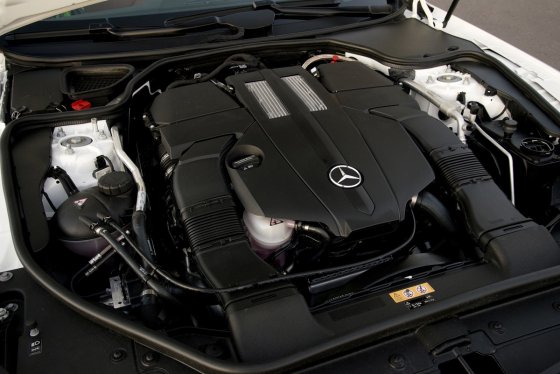 The 2017 Mercedes-Benz SL450 is powered by a 3.0-liter V6 that’s been turbocharged to 362 horsepower and 369 pound-feet of torque. A nine-speed automatic transmission is standard equipment and powers the rear wheels. This makes for 0-60 mph times of about five seconds easily doable by most drivers.

On the road, the SL handles itself very, very well. It’s well-mannered when cruising the highway, agile in the corners, and frisky when the throttle is pressed. This base engine in the SL450 is very nicely done, running smoothly through its beautifully-tuned transmission. A true joy to drive. 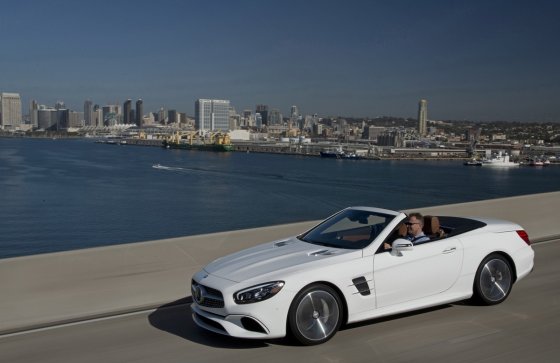 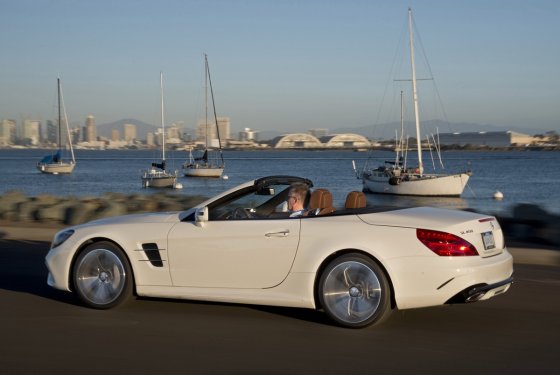 Pricing for the 2017 SL450 starts at $86,950 (before delivery) and our test model came in at $108,385 with delivery. In today’s market, it’s unusual to find a touring car of the 2017 Mercedes-Benz SL-Class’ caliber. It’s a lost art that’s often given way to performance in lieu of luxury. Not so with the SL. It has a well-rounded design in an excellent luxury touring package that begs for an open road on a clear day.