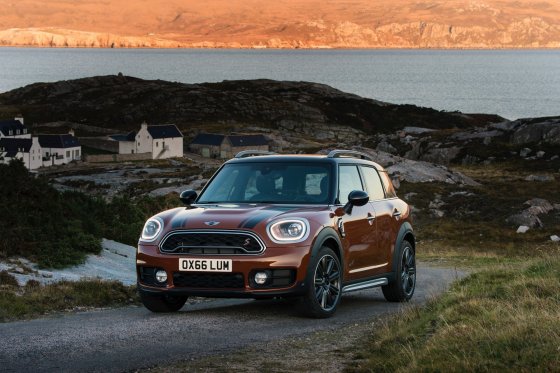 It may be the least-mini of all the MINIs, but the 2017 MINI Cooper Countryman is right-sized for a lot of folks who may have wanted a MINI in the past but couldn’t justify it because they have families to transport.

The folks at MINI recently invited us to spend a week in a 2017 MINI Cooper S Countryman with MINI’s ALL4 all-wheel drive. We came away loving its mix of practical space, great style, and fun-to-drive nature. And while it’s larger than any previous MINI, the Cooper Countryman maintains an easy-to-manage size in an America filled with gargantuan trucks and SUVs. 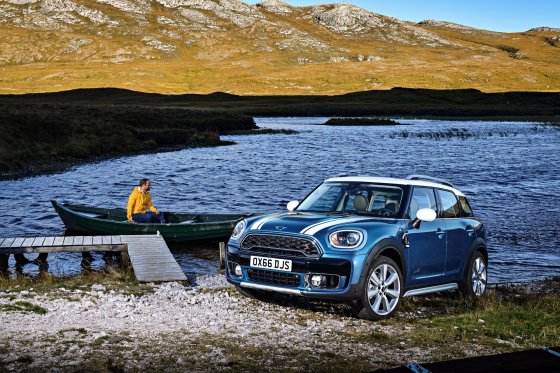 Though MINI is owned by BMW nowadays, the styling of the Cooper Countryman we tested maintains plenty of British bulldog charm that draws ample comparisons to the original MINIs of the 1960s. Overall, it looks kind of like someone took a MINI Clubman and over-inflated it.

Our test car was painted Island Blue Metallic (it adds $500 to the price) and featured LED headlights and foglights at the front. Plastic cladding ran around the lower extremities of the car, including the wheel arches, giving it a dose of SUV-like rugged looks. There’s a bit more ground clearance on the Countryman than on other MINIs, giving those design cues some real-life merit. Sharp parking garage ramps and gravel roads did not result in any scrapes to its elegant chin.

On top of the car were standard side rails that could come in handy for active, outdoorsy types who want to haul a kayak or what-have-you. We didn’t put those to the test. But much like the added ground clearance and black plastic cladding, they certainly looked the part, even if they didn’t necessarily get called upon to play it. That’s something one might say about a lot of SUV design cues nowadays. 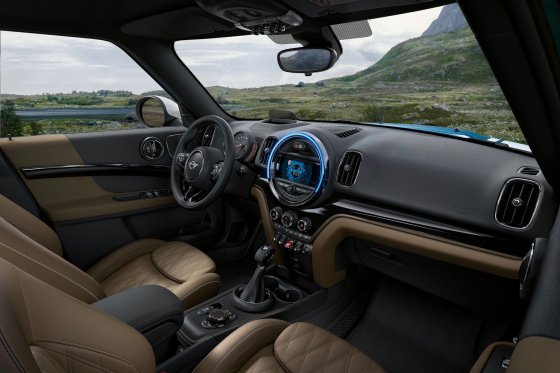 Inside, our MINI Cooper S Countryman ALL4 was trimmed in exquisite Chesterfield leather in English Oak color, which added a stout $1,750 to the bottom line. It’s worth it. The diamond stitching was superb, and the seating surfaces gave the Countryman’s interior an air of luxury befitting a European sports car costing twice as much. Kudos to whomever designed the front bucket seats, too: They had extendable thigh support and great side-bolstering that held us in place during spirited driving without making the seats unpleasant to live with during the daily slog to work and back.

We’re not-so-ready to hand out equal plaudits to whomever made the panoramic glass-panel roof standard fare for the Countryman. It did give the cabin an open, airy feel, but in hot temperatures, our tester was a veritable greenhouse within minutes of parking in direct sunlight. Thankfully, the HVAC system was up to the job of cooling things back down when we returned. 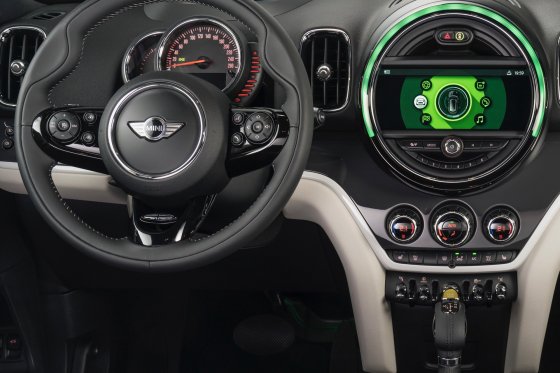 If you haven’t seen a MINI interior up-close in a few years, you may be forgiven for expecting to see the speedometer in the center of the dash. Our Countryman tester had a neat twin-gauge setup behind the steering wheel with a big, round speedo and a half-moon tachometer poking out from behind it. This was much easier to use — and less distracting — than a center-mounted speedometer. The big, round element in the center of the dash remains, but is now home to MINI’s infotainment screen, which shares some bloodline with the excellent BMW iDrive setup. 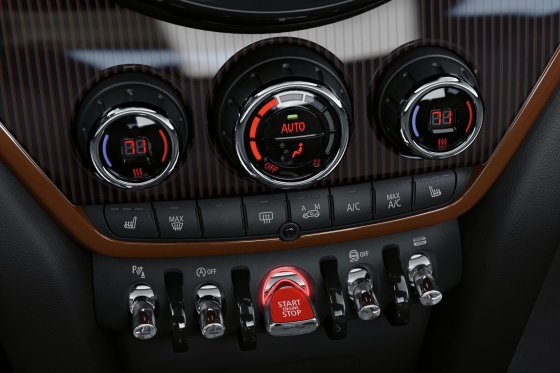 Finally, we would be remiss without mentioning MINI’s use of old-fashioned toggle switches at the bottom of the center stack. The car’s keyless ignition is even actuated by flicking a toggle switch. We’re not sure exactly what it is, but something about the tactile experience of using a toggle switch is satisfying in a way that touching a circular button is not. 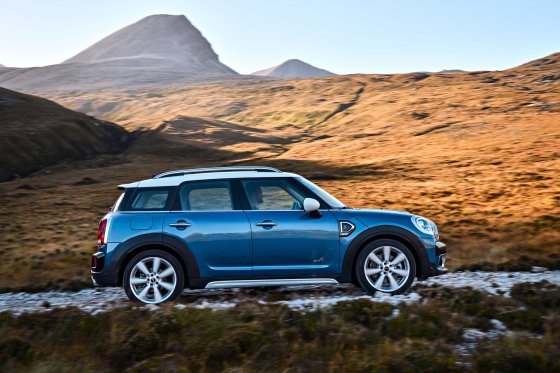 The 2017 MINI Cooper S Countryman ALL4 certainly drives like the MINI of crossovers. In a burgeoning field of subcompact SUV-things that have hit the market in the last few years, seldom have we come across something as fun to drive as this Countryman.

Powered by a 2.0-liter TwinPower turbocharged four-cylinder gasoline engine making 189 horsepower and 207 lb-ft of torque, the Countryman had plenty of giddy-up to take us up to highway speed or zip around slower traffic. 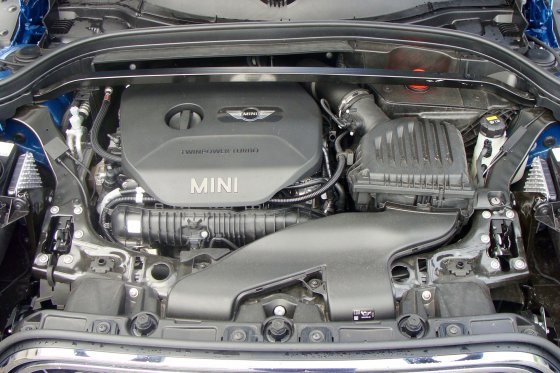 Steering feel is where MINI makes its reputation. Smaller MINI models often see words like “go-kart” used in describing their handling. While we’re not prepared to say the Cooper S Countryman ALL4 handled like a go-kart, it was certainly a lot more engaging to drive than slightly cheaper competitors such as the Buick Encore. It had plentiful steering feedback and great heft in Sport mode. Toggling over to the other two drive modes — Green or Mid — would reduce steering effort, but didn’t completely neuter the steering’s feedback. Given MINI’s Bavarian ownership, it was enough to make us wonder why all BMWs don’t have steering this good. 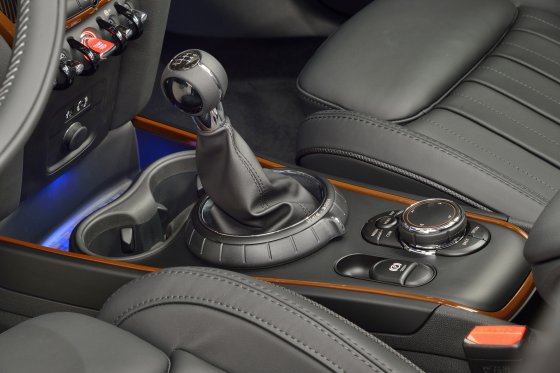 Braking was strong, but not too grabby. And throttle response was quick enough to keep it fun, without being annoying — here we’re thinking of certain Subarus with hair-trigger throttle response. The eight-speed automatic transmission was well-matched to the engine, though we probably would have enjoyed the optional six-speed manual transmission more. ALL4 all-wheel drive and great suspension tuning enabled surprisingly high cornering speeds on twisty backcountry two-lane. The ride was a little firm, but well-controlled over imperfect roads. 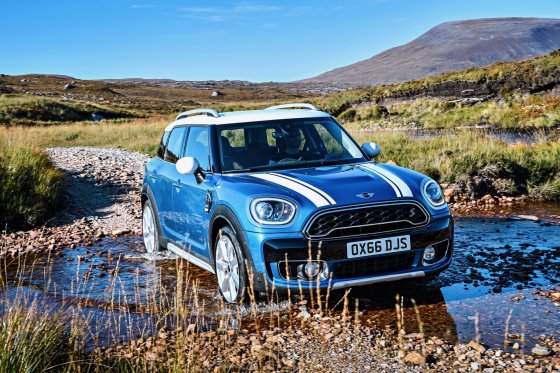 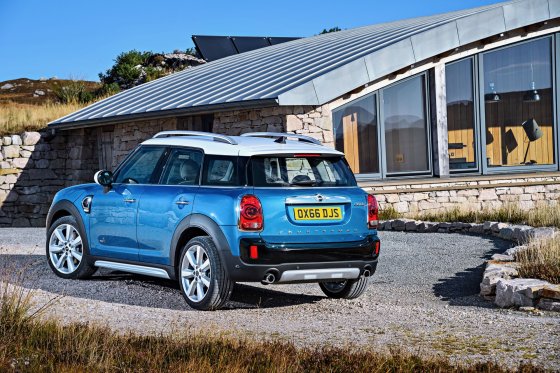 But as small, SUVish things go, the MINI Cooper S Countryman ALL4 provided a lot of driving fun in a luxuriant package that the above competitors don’t offer.

The Juke NISMO RS is loud, short-geared in manual transmission form, pretty stiffly sprung, and very cramped inside. None of that applies to the Cooper S Countryman, whose base price starts at about $31,000 — just $3,000 beyond the Juke NISMO RS. 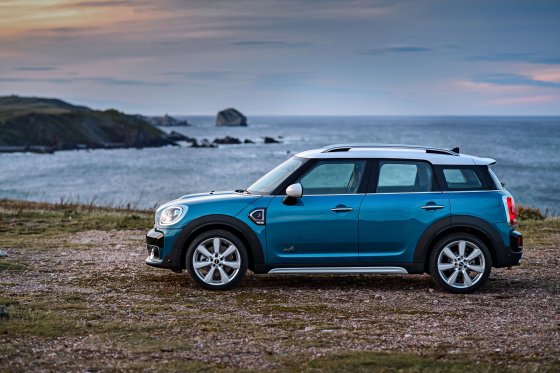 If you like the taller ride height and SUV form factor of either of those models, you’re probably not cross-shopping either of the VWs above. Besides, those are completely different animals, if we’re honest: The Golf R is a true hot hatch suited for autocross or track days right out of the box. The GTI has most of the goodies to do those same things, just a bit less power and no all-wheel drive. That said, our fully-loaded MINI Cooper S Countryman ALL4 had a sticker price of $38,450 — about $1,000 shy of a base-level Golf R. Different tools, different jobs. 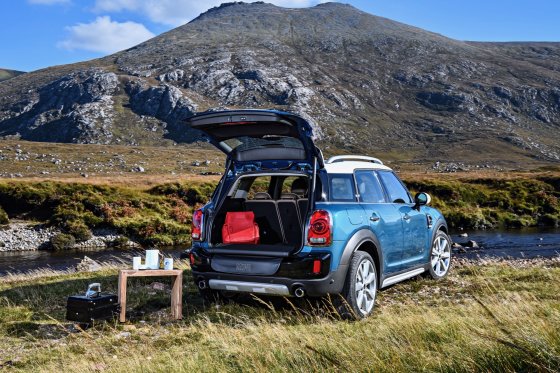 The real competitors here are small luxury SUVs like the Infiniti QX30S and its German cousin, the Mercedes-Benz GLA 250. In terms of practicality, the Cooper S Countryman has it all over those two. There’s more cargo space behind the MINI’s rear seats. The windows are bigger, for easier visibility. Every seat in the Countryman is more comfortable than the same seat in the Infiniti or the Merc, thanks in part to there being more headroom for every occupant of the MINI. Rear-seat passengers get more legroom in the Countryman than in the GLA or the QX30. The MINI is a lot more practical for those of us who have kids to tote, and it’s no less fun to drive than the slightly more powerful Infiniti or Mercedes. 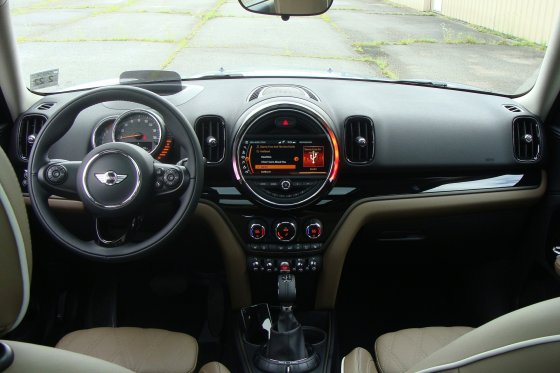 The MINI Cooper S Countryman ALL4 we tested had $2,250 worth of options in the form of MINI’s Technology Package and Advanced Wired Package. That brought parking assistant, a head-up display, MINI Connected 3 infotainment connectivity capabilities, and real-time traffic information along with an 8.8-inch touchscreen and wireless device charging.

The infotainment suite proved easy enough to use, though it could be better with a few tweaks. There was a control dial in the center console that was easy to manipulate while driving, but when using it to scroll through menu options on the screen, we always found ourselves turning the dial the wrong way. That said, we found that control dial less distracting than trying to use the touchscreen.

The unbranded six-speaker audio system had pretty meh-worthy sound. Sound quality and power quickly ran out of steam midway up the volume range. We searched for a way to tweak the EQ of the system, hoping to improve things somehow, but found an overly simplistic two-band EQ (bass and treble) buried deep within the setup menus. MINI should think about spending some extra money in this area, particularly for well-trimmed Countrymen like our tester. 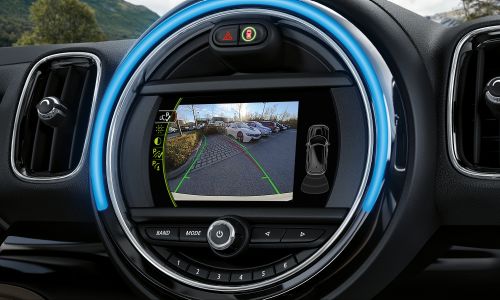 While the rearview camera wasn’t strictly necessary for safe backing — there’s great line-of-sight visibility through the Countryman’s upright rear glass and large rearview mirrors — the camera’s display was admirably clear. It made perfectly backing into a parking space even easier. A few times, it let us see pedestrians who were not visible from the driver’s seat while backing out of parking spaces at crowded shopping centers.

Automatic stop-start engine technology helped improve city fuel economy of the tall, brickish MINI Cooper S Countryman ALL4. EPA rated it at 22 MPG city, 31 MPG highway, 26 MPG combined. Our experience of mixed driving was at the upper end of that range, with a trip computer-reported 30.6 MPG by week’s end. 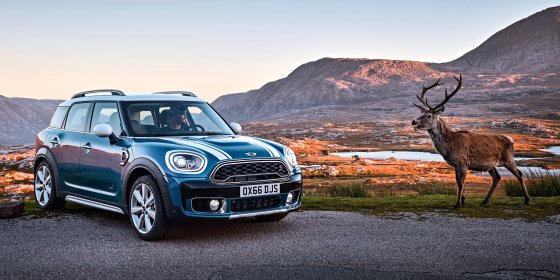 We found a lot to like in the 2017 MINI Cooper S Countryman ALL4. While the Countryman is the biggest MINI ever, its size is still tidy compared to many of the big, hulking things that ply America’s roads. Park it next to one of the small boxcars of the last few years like the Nissan cube or Kia Soul, and it looks very similar in overall size. That MINI faithful sometimes complain about the Countryman’s size ought to tell you just how tiny the two-door MINI Hardtop is. But comparing it to non-MINIs in parking lots will show you just how large most mainstream American-market vehicles have grown.

We came to think of the Countryman as “right-sized” for those who have a kid or two. Can you transport those kids in one of MINI’s smaller models? Sure you can. You might even enjoy the handling and performance more. But it won’t be as easy as it is in the Countryman. There was plenty of grocery-hauling room in the back of the Countryman, and we were able to haul a child in a rear-facing car seat without trouble on that grocery run. Try saying that about a MINI Hardtop two-door hatch.

Among entry-luxury small crossovers, the MINI Cooper S Countryman ALL4 is now a favorite of ours for its mix of great styling, fun handling, and practicality.