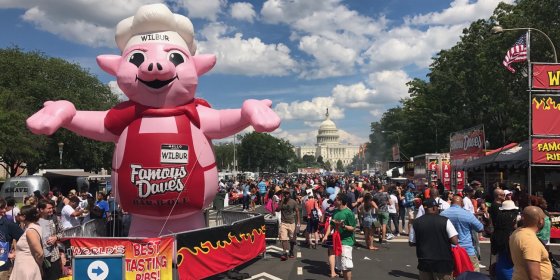 The 25th Annual Giant National Capital Barbecue Battle took-over Pennsylvania Avenue in Washington, DC over the weekend with the smells of smokers filling the air. The 2017 edition of this epic event was held between 3rd and 7th streets and beautiful weather encouraged large crowds to come out and enjoy the barbecue. For the second year, we spent a fun day at the BBQ Battle, which is one of our favorite local events to attend. 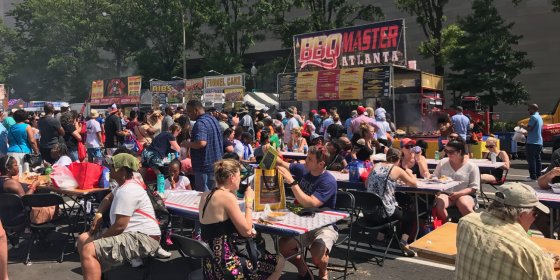 The main event was definitely the Barbecue Battle, with money and prizes being awarded to competing teams as the weekend concluded. At this year’s event, the competition teams were located closest to the Capitol Dome, which provided a patriotic backdrop to the serious competition. We probably don’t have to tell you that the Pitmasters were earning much higher approval ratings than Congress. While the competition is heated, the public tends to mostly be focused on free samples from the numerous brands that sponsor the event, and enjoying the musical entertainment, running on three stages.

Last year we put together a quick video to give you a taste of what the event is all about, and this year we decided to focus on photographs. So check out the gallery below which features competition BBQ teams, judging, Nathan’s Famous, Johnsonville Big Taste Grill, The Oscar Meyer Weiner Mobile, Mr. Peanut’s Nutmobile, and the massive inflatable Wilbur the Pig from Famous Dave’s.