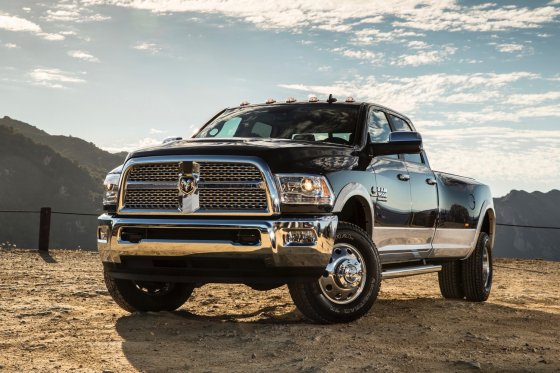 Pickup trucks come in a lot of flavors. They are generally rated by capability and at the height of that capability are the heavy-duty “3500” class of trucks. The 2017 Ram 3500 is one of those and with its dual rear axle configuration, it’s a serious towing machine.

The Ram 3500 is a true workhorse, meant to carry or pull heavy loads without complaint. Like any useful tool, the Ram 3500 is part Swiss army knife and part task-oriented specialist. As with most pickup trucks, the Ram is capable of hauling your friend’s stuff when she moves, carrying your gear for camping, and towing around the toys when you head to the lake. Unlike just any other truck, though, the Ram 3500 can also carry pallet loads of bricks, lumber, etc. to the jobsite and pull a trailer with a backhoe and pallets of sod or landscaping blocks. 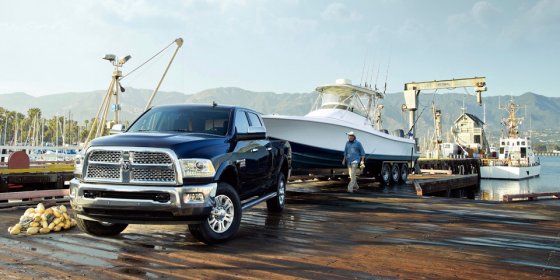 The 2017 Ram 3500 is a very capable truck and, surprisingly, is also very comfortable and easy to drive. With three cab configurations, two bed lengths, two rear axle options, and three engines and transmissions to choose from, the Ram 3500 can be honed to match most any need. 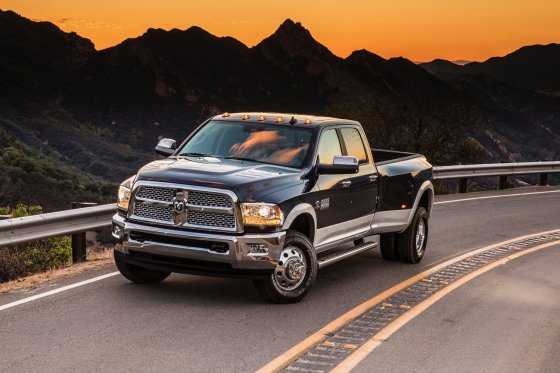 The 2017 Ram 3500 comes in several packages, starting with the workaday Tradesman and moving up through trims to the luxury-level posh Limited trim. Each of these trims adds some panache to the exterior of the truck, with some desirables like the dual tone paints and chrome, being standard equipment at the upper level.

Whatever the trim point, though, the 2017 Ram 3500 is made to look big and beefy. The Ram Truck lineup has this look throughout and there are only a few differences between the half-ton Ram 1500 and the bigger Ram 3500. Most of those differences are due to powertrain options and the much heavier chassis and framework that make up the 3500.

On the curb, the Ram 3500 is tall, with a lot of clearance between the wheel wells and the tires in order to allow long suspension travel when heavy loads are put on the truck. Up front, a tall hood and slightly protruding nose make it clear that big engines are used to power this massive pickup truck.

Other things that don’t change much from trim to trim are wheels and tires. Heavy-duty alloy wheels are the norm in the Ram 3500 and are meant to bear a lot of weight. Thus the options for upgrade or change are few and sizes remain the same throughout the trim points. Tires are similarly unchanged through the 3500’s trims for the same reason.

The Ram 3500 Tradesman, which serves as the base model for the truck, rings in at about $34,000 and has little in the way of exterior frills. Simpler, plastic edges around the grille and bumpers and no-nonsense door handles are the name of the game with this model. It’s all about work, not bling.

The next level is the SLT, which replaces most of that black plastic trim with chrome. That and monochrome paint remain through the Big Horn (called the “Lone Star” in Texas) and upper trims. The Laramie Longhorn and Limited trims both offer dual-tone paint with added edge pieces around the wheel wells, body, and bumper guards with paint options only available on those trim levels.

At its base level, the Ram 3500 Tradesman is a strong, no-frills work vehicle. In the upper trims, the Ram 3500 Laramie Longhorn and Limited becomes a beautifully strong working machine that can turn heads for its good looks. 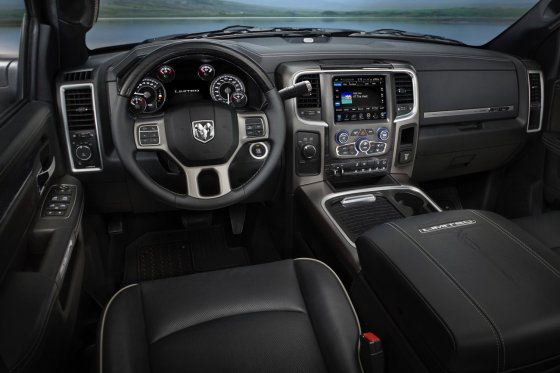 On the inside, all Ram trucks are well done, no matter the trim level. The basic Tradesman model for the 2017 Ram 3500 is made for working and has storage spaces and materials to match that aim. Materials quality is good, but basic and made for being used. Upper trim points, such as our Longhorn package, have beautiful leather and smart accoutrement upgrades like chrome finishes and the like that really make the Ram 3500 become luxurious.

Yet the interior design of the Ram keeps the essence of a working truck in mind at all times. Everything is about getting the job done, with good controls layout and comfortable, but not overly-cushy seating.

Cab configurations change things as well. The regular cab seats three across on a bench. The Crew Cab (like a king cab from other manufacturers) has smaller rear doors and a bit less space in the back than the Mega Cab (a true crew) does. Both are well-done with good Ram designs for seat tilt, cushion lifting, and under-seat storage. The “saddle bags” in the floors are also there on the Mega Cab, being just beneath the floor mats and becoming prime storage for hitches, tie downs, etc.

The Crew Cab option for the Ram will seat an additional three in the back with the front seats becoming bucket seating by default, though a bench is still available. The Mega Cab does the same, but has adult-friendly long trip legroom in the back. Headroom and shoulder room are the same in all three cabs – excellent. Grab handles and optional side steps or running boards make it possible for most people to get in and out of the tall truck relatively easily.

The best of those is the 8.4-inch Uconnect with navigation and other upgrades, including making it a WiFi hotspot – important for on-the-go contractors and “who knows where I’ll be today?” types. Uconnect is one of, if not THE, best infotainment on the market right now. 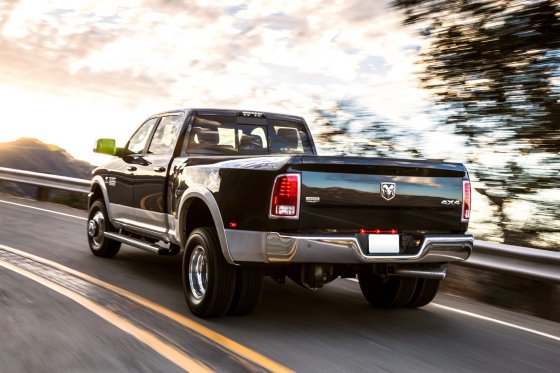 The 2017 Ram 3500 has three engine options, a transmission for each, and can be had in either rear-wheel or four-wheel drive.

The base engine is a 5.7-liter V8 HEMI that outputs 383 horsepower and 400 foot pounds of torque. A six-speed automatic transmission is standard. This engine has a natural gas option as well. Towing with either the gasoline or NG option is rated at up to 13,910 pounds. The EPA does not give fuel efficiency ratings for vehicles over 8,500 pounds, which includes the Ram 3500.

The upgrade from that 5.7 is to another gas engine, the 6.4-liter V8. This big monster (a version of which is found in vehicles that use the term “muscle car” as a title) growls out 410 hp and 429 lb-ft of torque. A six-speed automatic tuned to this engine’s higher output is standard. Towing is rated at up to 16,370 pounds. 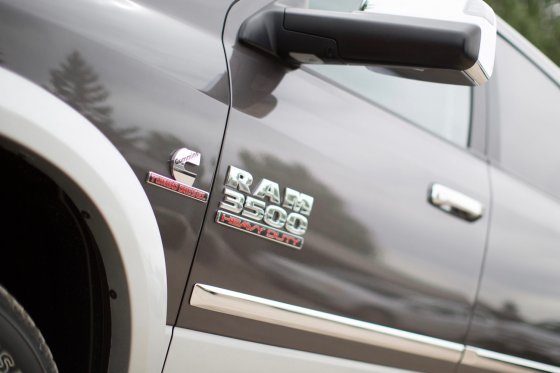 The biggest engine option is a diesel. This 6.7-liter monster churns out 350 horses and 660 lb-ft of torque. A six-speed manual transmission is standard. Yes, a pickup truck with a manual transmission and diesel engine. Internet trolls, your prayers have been answered.

A six-speed automatic transmission upgrade raises that output to 370 hp and 800 foot pounds. Now, wait for it.. A heavy-duty version of that same transmission boosts output potential even further to an amazing 385 horsepower and 900 pounds of torque. That’s where the over 31,000 pound tow rating comes in. 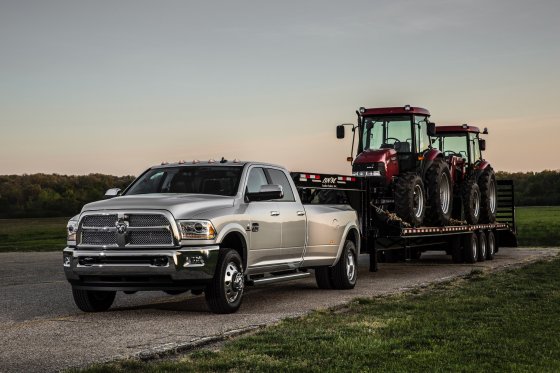 The Ram 3500 has two bed lengths available, depending on cab configuration, with a shorter 6-foot and a longer 8-foot option. We drove the latter, which increases cargo space considerably and allows full sheets of plywood to be stacked in the bed with the gate closed.

Hauling (payload) capacity for the Ram 3500 is 3,787 to 4,476 pounds, depending on the truck’s configuration (engine, bed length, cab type). Towing is rated at up to 31,210 pounds, also depending on configuration. Our test model was a 2017 Ram 3500 with a Mega Cab, four-wheel drive, long bed configuration and the big diesel engine with its heavy-duty transmission option. 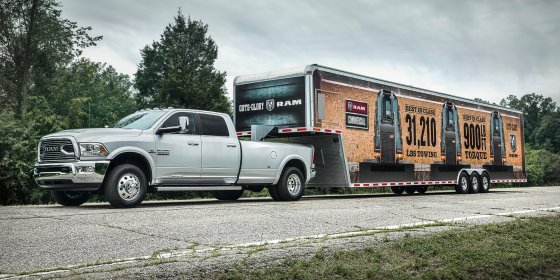 During our week with the Ram in that build, we pulled an 11,000 pound trailer from a gooseneck mount for about sixty miles in all, including rural roads and highway. We also hauled several hundred pounds in cargo (straw bales) on another trip of about the same length. In both cases, the 2017 Ram 3500 did very well.

The towing was less than half the truck’s true capacity and driving the Ram with that weight was almost like having no trailer at all. The big diesel performed about the same in acceleration and driving as it did without a trailer. The big mirrors and built-in plugs were useful, trailer hitching was a snap thanks to the (optional) backing camera in the bed’s cargo light on the back of the cab, and Ram’s bed cover (optional, installed on ours) folds back easily for access to the bed and hitches. The Ram’s gooseneck hitch is easy to drop in and pull out, as are the tie-downs that go to either side. Not as easy as the flip-ups we’ve seen on some models as an aftermarket, but really good regardless.

The big dually turns and pulls well under load and the braking and other in-built trailering inclusions that come with the truck are well done. Sway control is good in the Ram 3500 too, even in our legendary Wyoming crosswinds. Downhill braking takes some practice, of course, but the Ram’s towing mode adjusts the ABS to make occasional slow-down braking a near no-brainer. 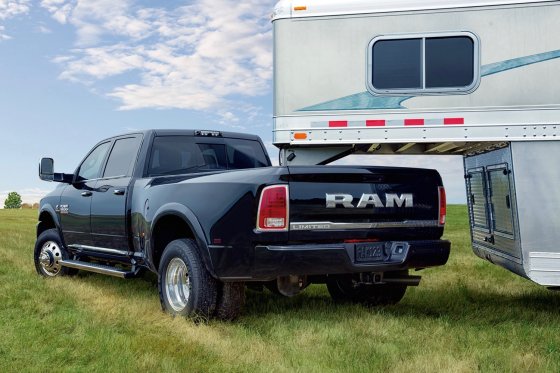 The overall assessment here is that the 2017 Ram 3500 is one of the best heavy-duty trucks you can buy. There are options for just about every need and capability for most requirements. With the biggest option, the Ram 3500 Mega Cab 4×4 with the long bed, big 6.7L diesel, and heavy-duty transmission equipped, we felt capable of pulling the world. Yet without a load, the truck is still manageable and comfortable to drive. So getting to and from a working location is not a drama-filled spinal workout as it can be in some heavy-duty vehicles running empty. For those who need a serious workhorse, we very much recommend a look at the 2017 Ram 3500.