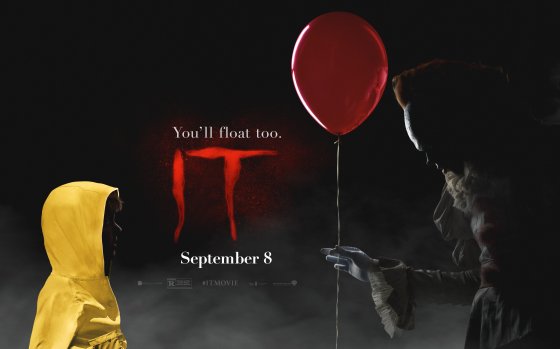 Stephen King’s epic IT was – both as a novel and a 1990 telefilm adaptation – about facing your childhood fears head-on while being hit with the pains of puberty. It was also about a love shared between friends capable of fighting an unshakable evil preying on those who couldn’t hit back. Thirty-one years after its publication, IT claws out of the darkness and onto the big screen, larger than life and reducing everyone in the audience to the age of its preteen protagonists.

Gorgeously shot, acted, and executed, IT revels in the joys and sorrows of a childhood summer marred by tragedy. In a town where horrific death and disappearances seem to occur every twenty-seven years, seven disparate youths – self-titled The Losers Club – become a force greater than the sum of their parts. Binding them together are their narrow brushes with Pennywise the Dancing Clown (Bill Skarsgård), the avatar representing the subterranean monster living under their hometown of Derry, Maine. 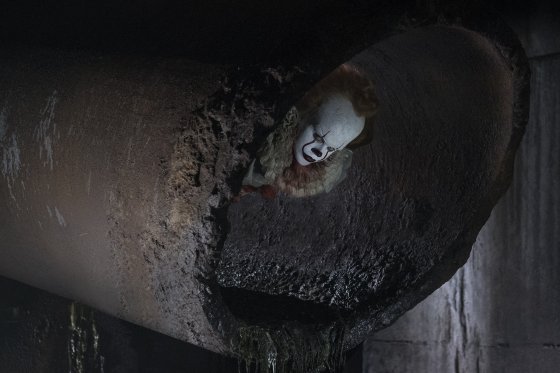 Skarsgård gives us a fresh and absolutely psychotic turn as Pennywise, enough to scurry out from under the shadow of Tim Curry’s iconic 1990 performance. With teeth bared, cheekbones sharp enough to cut, and a frenetic voice ranging from a whisper to a wail, Skarsgård doesn’t just play Pennywise – he is Pennywise. He may appear suddenly, or he may slow-roll his entrance; he may speak in the tones of secrets, or he may be keening his promises of pain and blood. Regardless of pitch, Skarsgård’s body language and facial contortions make him perfect for the role, eliciting screams from the audience at the appropriate moments.

Director Andy Muschietti doesn’t waste any time introducing us to this terror lying in wait for us over the next 135 minutes. The film starts as the novel does, with the ailing Bill Denbrough (Jaeden Lieberher) giving his younger brother George (Jackson Robert Scott) a paper boat to sail in the flooded streets as a rainstorm pounds their home. George, whose innocence and spark life has yet to dim, bolts out the door, excitedly running full-tilt alongside the S.S. Georgie… which unknowingly leads him straight to a shocking, heartbreaking encounter with Pennywise in a storm drain. (Scott must be commended for how much he makes the audience feel for him in spite of his limited exposure.) 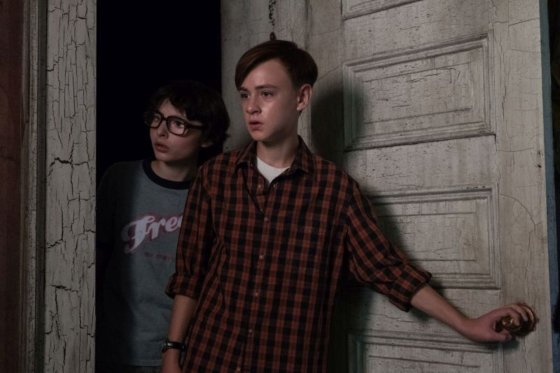 The loss of innocence is not merely what kicks the events of IT into motion; it is the undercurrent running through this entire film. Derry’s sewer system itself is the metaphor for the evil lying underneath the surface, with branches spreading everywhere and into places we might call home. Adults – too busy with concerns of the adult world – can’t or won’t see what the kids see, or they may not want to see, in ways becoming agents of the mysterious evil. 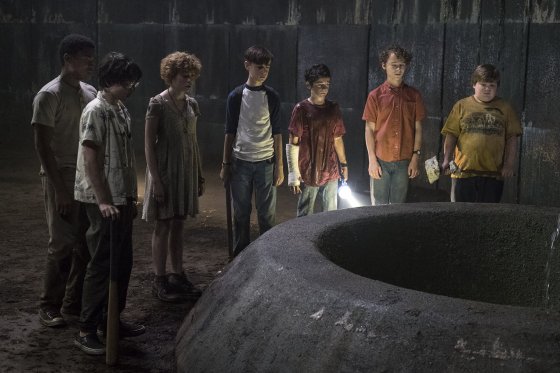 Muschietti’s IT is a child’s world, mostly filmed from their eye level. Adults and buildings seem bigger than they should be thanks to Chung-joon Chung’s standout, wide-angle cinematography, making the audience one with The Losers Club through every scare and adventure they encounter. As their feet pound the floors of the grimy house on Neibolt Street, our feet pound the floors of the theater with our own anxiety. Chung and Muschietti make us bask in the dark, unknown recesses of their frames, this absence of light almost becoming a character itself.

This brown-tinted world of 1989 (moved up 31 years from its 1958 milieu) recalls shades of days past, when kids could venture out on their bikes and leave them lying in the road, counting on cars to pass them by. ITs kids are not without fear, yet their personalities and obvious affection for one another – no matter how raunchy Richie “Trashmouth” Tozier’s (Finn Wolfhard) “your mom” insults get – carry the film handily to its conclusion. Bill may be their leader, but each member has their purpose: Richie, the comic relief; Ben Hanscom (Jeremy Ray Taylor), the historian and bookworm; Mike Hanlon (Chosen Jacobs), the newcomer; Stan Uris (Wyatt Oleff), the germaphobe fussbag; and Eddie Kaspbrak (Jack Dylan Grazer), the hypochondriac who learns more about the lies adults tell children than he’d like to. 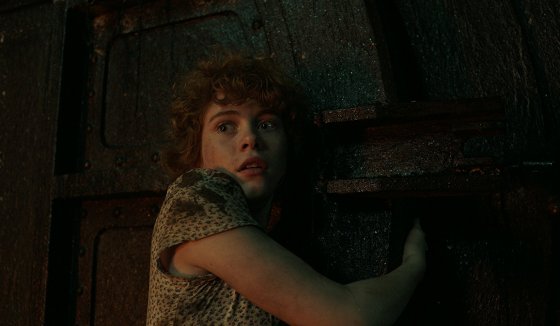 The heart of the group belongs firmly to Beverly Marsh, thanks to Sophia Lillis, who gives the film’s finest performance. A victim of implied paternal abuse, Lillis fashions Beverly into the film’s stoutest warrior, fighting for the group’s soul when It wants to tear them apart. She effectively parries whatever life (or death) in Derry throws at her – being the (literal) dumping ground for the rich kids, rising above town gossip, making a new friend on the last day of school with a New Kids on the Block fan – and she hasn’t even hung out with The Losers Club once. Of course, as soon as she’s drawn into their circle, she makes a case to be the brightest and most-respected of the bunch by being one of them – not as a boy, but as a kindred spirit.

The script, by Chase Palmer, Gary Dauberman, and Cary Fukunaga (previously attached as director to this project) adapts the 1958 portions of King’s novel well, leaving in much of the playfulness and all of the horror. Some events and locations have been changed or deleted for narrative and budget purposes, and some character traits have been combined or forgotten altogether (like Stan’s belief in the power of birds). Newcomers won’t have a problem with what they encounter in this translation, but longtime fans (of both the novel and telefilm) will undoubtedly bring their own baggage to bear.

Thus, it begs the question: Is IT a good enough film to stand on its own, or is it a good film because of what our memories of the novel help us fill in? Curiously enough, the answer is both. Muschietti’s IT is made of fabulous construction and execution, with unforgettable imagery not found in past incarnations. The visage of Stan’s tormentor, Pennywise’s mouth, and an undeniably genius-filled image evocative of a ghastly carnival swing ride are among this film’s treasures. The actors playing the seven Losers give so much life and humanity to their characters in manner and action, with a more natural breeze to them than their 1990 counterparts. Stan’s character may be the odd man out at times, feeling a little more glossed over than the rest of the characters, but it’s not like he’s discarded or doesn’t throw his weight around. 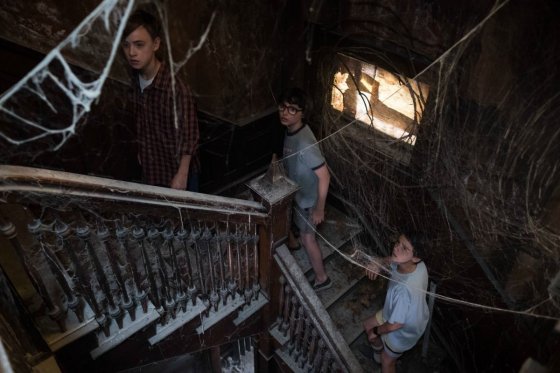 Having knowledge of the source material greatly enhances the experience of this form of It, giving you a graver understanding of the characters and what’s at stake. For instance, the name Eddie Corcoran is merely mentioned at one point, while fans of the novel know an entire chapter was dedicated to him and his family’s fate. Adults are implied more to be under Pennywise’s influence, thus deepening the existing mistrust kids place in them. And most importantly, The Losers Club and each of its members are defined in ways impossible for even a two-hour-plus film. 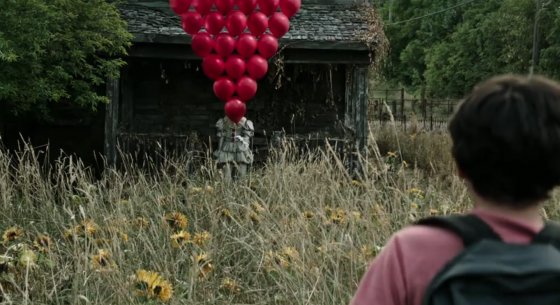 In spite all of the necessary changes, IT has no problem carrying the weight brought forth by the novel. Muschietti and company have captured the essence of intrepid summers spent alongside friends, with a dread-filled pall hanging overhead like a rainstorm about to burst. Picture a mix of the fun of The Goonies, the humor of Stand By Me, the thick friendships (and language) of Good Will Hunting, and every nightmare you’ve ever had. The best (and scariest) of all of them is what IT is made of, exploding with a manic rush and leaving you hoping for more.

Gorgeously shot, acted, and executed, IT revels in the joys and sorrows of a childhood summer marred by tragedy.