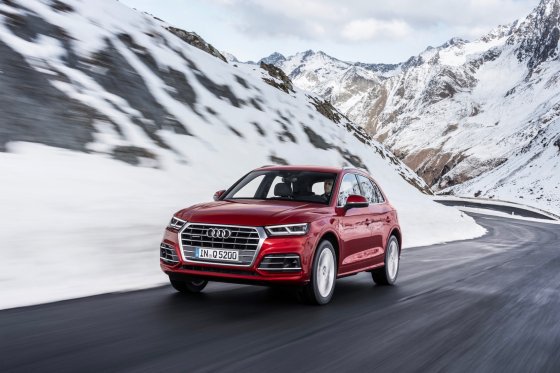 The 2018 Audi Q5 brings a full redesign to the crossover on a chassis debuted with the A4 sedan. The new Q5 is longer and wider, though only by millimeters, but has a better ride dynamic than the outgoing model. The new Audi crossover also has more technology inside and improves its drivetrains.

All of these are good things, pushing the 2018 Q5 forward as a competitive luxury crossover. The previous Q5 was a long-lived best-seller for Audi, so the new model’s improvements are building on what was already a great heritage. We found the 2018 Audi Q5 to have a good combination of old world road manners and new age technology. 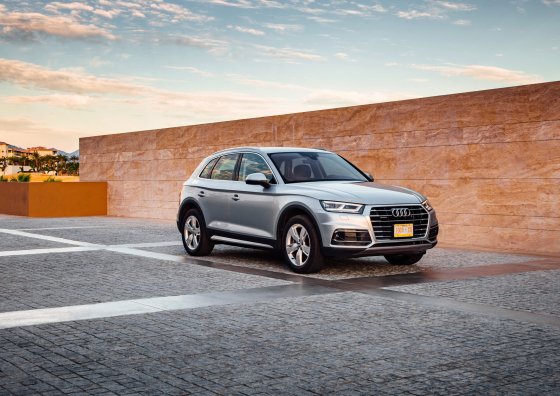 From the outside, the changes to this new Audi Q5 are subtle. The lines are crisper and there is a more rectangular look to the front fascia compared to the previous-generation Q5. The slightly larger size, however, keeps the same proportions found on the outgoing generation.

The subtle differences on the bodywork are the most noticeable of the updates to the design of the 2018 Q5, but other changes are also present. The new Q5 has more gap between the tires and wells, plus larger wheels, giving the Audi Q5 a more robust appearance. The flat roofline is offset by a gentle curve on the bodywork as well, which downplays the rugged lower half of the Q5 by adding a more sporty, upscale look to the bodywork.

These are all nice changes to what was already a well-designed crossover. The 2018 Audi Q5 is a good looking crossover-SUV. 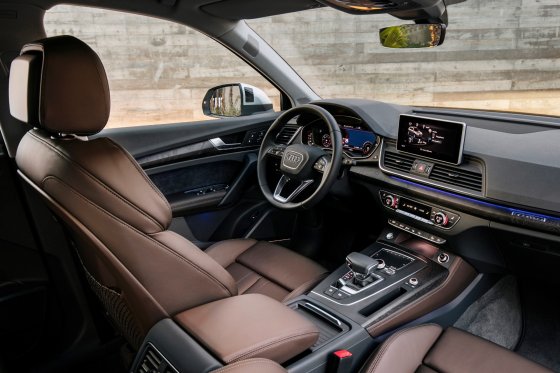 The interior of the 2018 Q5 falls into line with the general design bent of Volkswagen and Audi. It aims towards an upscale, minimalist look and pulls it off nicely. The greatest changes, outside of obvious comfort items, are to switchgear, which is greatly reduced in the new Audi Q5.

Those changes come thanks to some multipurposing of various controls. This keeps the versatility and control capability there while reducing the number of buttons and knobs required to make it all accessible. Visibility of the controls is also greatly improved thanks to advents like the virtual instrument cluster, which is one of the best things we’ve seen in a new vehicle in a long time. It’s easy to read at all times and very functionally customizable.

The rest of the interior’s design in the 2018 Audi Q5 is very much in line with what Audi is most well known for. Quality materials with excellent workmanship are found throughout the cabin. Added to that are some ergonomic touches like tall, wide doors for easier entry and exit and a roomy appeal are the norm. We also like the cargo area’s hooks and stowage options for making life easier. That cargo space measures 26.8 cubic feet with the rear seats up and 60.4 with them down flat. The track-based cargo system works well for creating tie-down points in the rear and the power liftgate (standard equipment) is a boon. 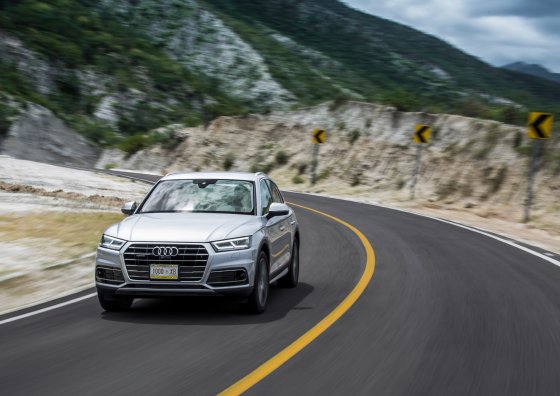 The 2018 Audi Q5 has a 2.0-liter four-cylinder engine as its base offering. This engine outputs 252 horsepower and runs through a very well-done seven-speed dual-clutch automatic transmission. Front-wheel drive is the norm, but all-wheel drive is standard and the Q5 does an excellent job of engaging that when it’s needed and of shutting it down for better efficiency when it’s not. For all that, there’s little reason to opt for the engine upgrade to get six cylinders instead.

The V6 is a 3.0-liter twin-turbocharged unit that outputs a more respectable-seeming 354 horsepower to an eight-speed automatic transmission with the same front-centric AWD system. This is a lot more good power, obviously, but it’s not as needed or useful in the Q5 as it once was. 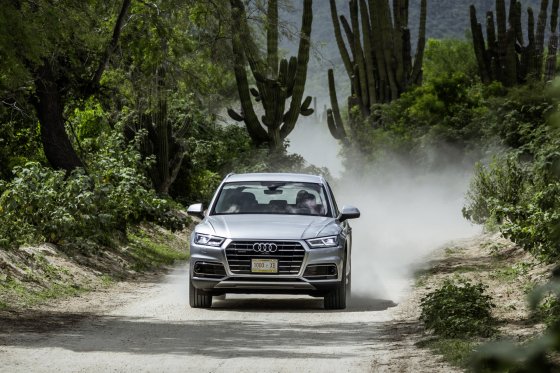 Having driven both, we’d stay with the four. That turbocharged goodness adds just the right amount of muscle for the Audi Q5 to get around well and not feel sluggish or bored doing so. The dual-clutch transmission is very well done and makes the four-banger feel far more capable than it would otherwise. It’s fast, responsive, and does a lot to minimize the turbo lag inherent in most turbocharged engines. The V6’s transmission just doesn’t have that quality.

Knowing all of that, we do have a complaint about the 2018 Q5’s traction and stability systems. They engage regularly, often when not needed, and can make some more spirited driving feel herky-jerky when it should be smooth. This over-aggressive balancing of the crossover is unneeded and detracts from its otherwise very likeable nature. It’s not noticed in normal, daily driving, but will be noted when that country road beckons.

As a daily driver and luxury family hauler, there’s absolutely nothing to complain about in the 2018 Audi Q5. It’s a very nicely-done crossover.

We mentioned that technology plays a big role in the new 2018 Audi Q5. Audi upgraded their MMI infotainment interface to make it more user friendly. They accomplished that mission with one of the more intuitive options we’ve seen from a luxury make. Steering wheel controls in the Q5 are now some of the best we’ve seen, allowing robust use of the infotainment/driver’s information systems with hands fully on the wheel. The track pad for the center console’s command controller is also well-integrated and useful.

The Q5 comes standard with Apple CarPlay and Android Auto, though they’re difficult to use sometimes due to the lack of a touchscreen in the Audi. It requires some effort to get past that, but once there, they become useful options. Most of the time, though, the Q5’s MMI will do well without any phone plug-ins required. With the exception of longer drives and techno-geek requirements, the Q5’s built-in system can take care of business on its own.

The 2018 Q5 has a lot to say for itself safety-wise. This is one of the safest vehicles on the road, if we’re to go by the crash test experts. The National Higwhay Traffic Safety Administration (NHTSA) has rated the 2018 Audi Q5 as a 5-Star vehicle. The Insurance Institute for Highway Safety (IIHS) gave the Q5 a full suite of top-notch “Good” ratings on all of its tests. 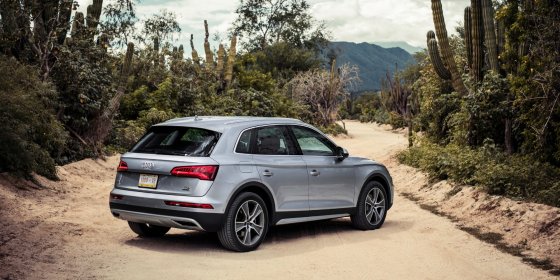 Competition in the two-row, small-midsize luxury crossover arena is pretty steep. There are a lot of good options to be had for those shopping around. The 2018 Audi Q5 brings a lot to the table, though. It’s a great balance between luxury, comfort, and good drive dynamic that will sit well with many buying in the segment.