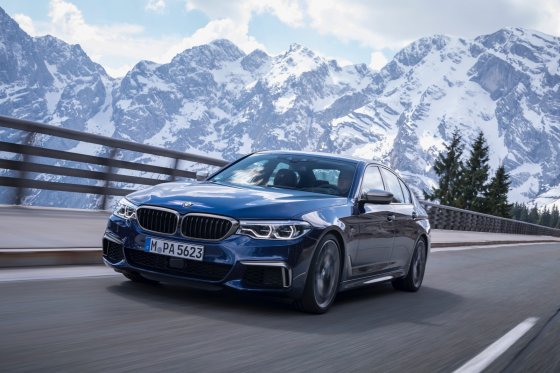 The top performance model in the BMW 5 Series lineup, the 2018 BMW M550i is the model line’s muscle car, but with all of the refinement and top-shelf excellence we’d expect from a German-made sports sedan.

BMW reintroduced the 5 Series as a redesigned model for 2017, but was missing a muscular M series offering. Those came this year, with the M550i being the most powerful of the 5 Series on offer. We drove the 2018 M550i for a week and loved every minute of it.

This midsize luxury sports sedan offers power, luxury, and road handling well beyond any pure muscle car on the road. BMW knows how to build a true driver’s car and when they add their M badge to something, it means it’s gone past being merely great to drive and turned into something beautiful. 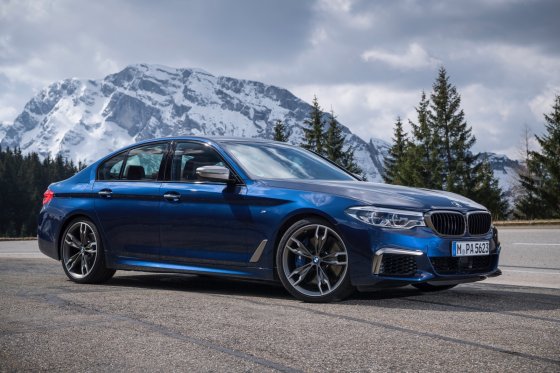 The new exterior for the BMW 5 Series is longer, lower-appearing, and faster paced than were 5s of the past. We saw this last year with the BMW 530i and the plug-in hybrid BMW 530e.

The new BMW kidney grille is more rounded and appears smaller than in previous generations, largely due to a bigger lower intake and wider, thinner headlamps that flank the grille. The hood is long and sleek, making note of what’s underneath in the saloon-type styling BMW has great affinity for. On the outside, few things set the 2018 BMW M550i apart from other 5 Series sedans.

With the M series editions, like the M550i, most of the differences are in details. The lower intake is a bit wider for more airflow to the bigger engine and the M badges found on the grille, rear deck, and so forth all note the car’s sports roots. The top-line 2018 M550i also has a little more bling on the exterior with some added chrome accents at the windows.

The 2018 BMW M550i is otherwise the same as its other 5 Series brethren with its deeply-lined, but simple bodywork and lower roofline to narrow the greenhouse. The rear clipped deck in a fastback style remains as well. 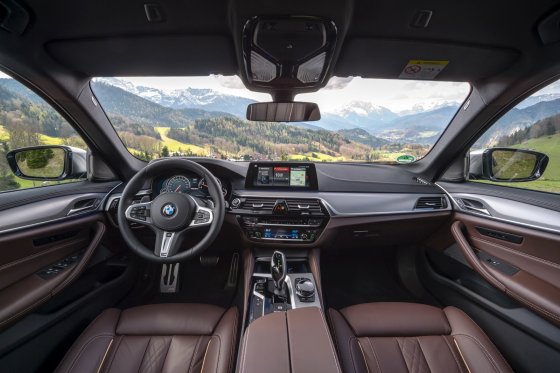 The high appeal of the previous generation BMW 5 Series is carried forward and enhanced with an evolution of design changes. The dashboard is narrowed and lifted slightly, adding more legroom and a more airy feel to the cabin. The center stack is wider and bulkier at the middle while thinning towards the driver and front passenger’s knees. This gives a sinuous feel to the “T” of the dash and adds more space for technology.

That technology is seen in the form of more digital outputs and larger screens. Redundant and useful hard controls for common adjustments to climate and radio tuning are still there, but aided by BMW’s Gesture Control for controlling the infotainment without touching the control knob for the screen. Finger movements and hand waves are all that’s needed to do simple tasks such as accepting or declining/hanging up phone calls, turning the volume up or down, accepting incoming texts, etc.

We’re big fans of BMW’s infotainment with its easy controls and fast responses. It’s especially nice as the gesture control system also senses whether it’s the driver or passenger at the infotainment’s helm, allowing more functionality for the passenger when the vehicle is in motion while still keeping things safe by restricting some things for the driver. Remote Parking, which we’ve spoken of before, is also available on the M550i.

For the driver, seating is excellent in the M550i with extra bolstering for more comfort during spirited maneuvering. The pistol grip shifter is both refined and appealing in its testosterone feel and the wood inlay and metallic accents in the cabin are pleasing to the eye. The front passenger has similar bolstering in that seat with a lot more legroom than before. In the rear seating, legroom is greatly enhanced in the new 5 Series design, as is trunk room for cargo. 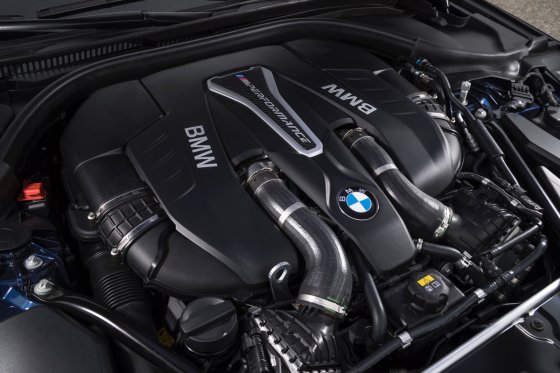 The 2018 BMW M550i is powered by a well-balanced, 456 horsepower 4.4-liter V8 that is twin turbocharged and attached to a beautifully-tuned automatic transmission. Paddle shifting and sport-enhanced drive modes are also included.

This engine powers the 2018 M550i to sixty miles per hour from zero in under five seconds for most drivers. What’s better than that, though, is the superb handling given to the M550i’s chassis through M department engineering. AMG added chassis control elements and a nicely-tuned steering rack to the M550i which complements the engine very well. 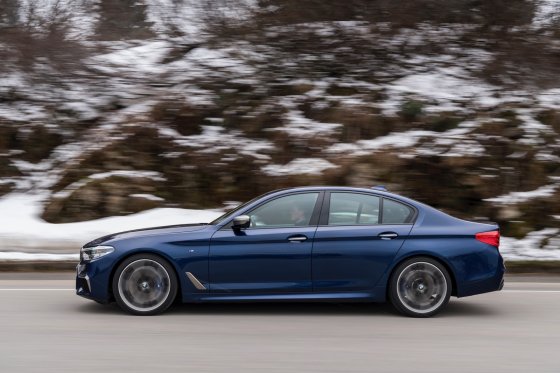 On the road, the 2018 BMW M550i is both calm and comfortable, but like a big teddy bear, it can be excited into muscular performance in an instant with just one throttle push. This big sedan carves corners wonderfully and holds the road very well, giving confidence in all driving conditions.

Fuel economy in the 2018 M550i is a little better than expected. The EPA rates the car at 16 mpg in the city and 25 mpg on the highway. We experienced close to that in our xDrive model, averaging about 21 mpg overall after a week of driving in varied conditions. To compare, the most fuel-efficient 5 Series is the 530e plug-in, which is EPA-rated at 72 mpg-equivalent, combined and the base model 530i is rated at 24/34 mpg city/highway. 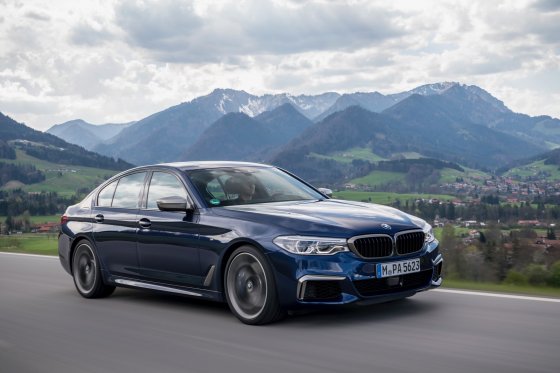 Safety isn’t normally something we’d concern ourselves with when it comes to performance sedans, but the 2018 BMW M550i does remarkably well in this respect. The 5 Series itself has received a 5-Star overall rating from the National Highway Traffic Safety Administration, the best available from that organization.

Likewise, the Insurance Institute for Highway Safety (IIHS) has given the 2018 BMW 5 Series a top rating of “Top Safety Pick+” for achieving a top score of “Good” on all crash tests plus on all advanced safety systems testing. That puts the BMW 5 in the leadership ranks for safety. 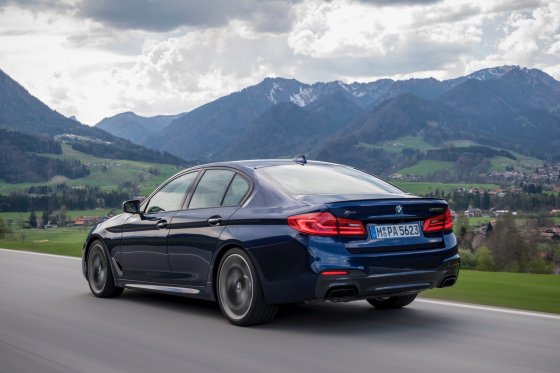 There are a lot of great competitors in the midsize luxury sedan market, but few that can truly be called sports sedans. Among them, the 2018 BMW M550i stands out for its muscular V8 performance, beautiful exhaust note, fast pace, superb handling, and exceedingly luxurious interior and ride quality. This sets benchmarks for others to follow in the performance sedan classes.