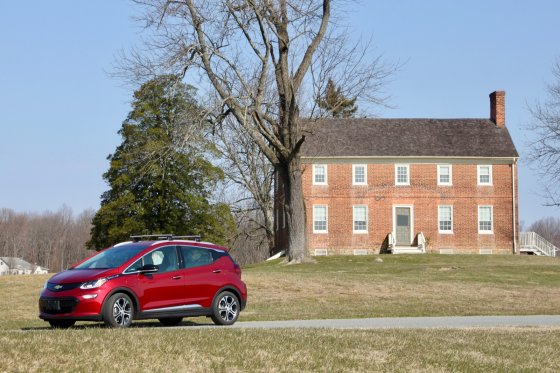 Despite the Trump administration’s best efforts to ensure our vehicles will always be powered by fossil-fuels, electric cars are not just the future, they’re here now. The category is more than just Tesla, nearly every brand has an electric vehicle (EV) now and the Chevrolet Bolt EV is one of the most compelling. We recently spent a week behind the wheel of the 2018 Chevrolet Bolt and it was easy to see how the Bolt won Green Vehicle honors at the 2017 WAPA Rally. 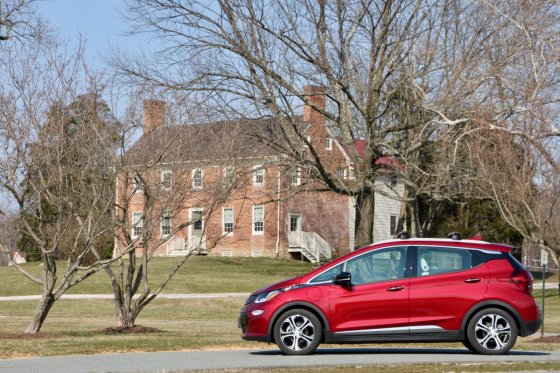 The Chevy Bolt EV isn’t trying to hide the fact that it’s an electric car, and has embraced some of the quirky styling queues previously seen on Toyota’s Prius, or the i3 from BMW. We would probably classify it as more of a hatchback than a crossover, but that line is a blurry one and the Bolt does offer a bit more height than you may expect.

Strong exterior features include the massive windows, trendy floating roof-line and chrome accents. While similar in some respects to other Electric Vehicles, the Bolt EV has enough style of its own to be unique. Our tester came with an aftermarket roof rack, which admittedly made the Bolt EV appear to be much more sporty and fun.

The Bolt EV is offered in some fun colors too, but unfortunately Chevrolet didn’t have one in Orange Burst Metallic available for us to drive. The color on our tester is called Cajun Red Tintcoat, and we thought it looked right at home with an old red barn in Maryland.

Headlights are HID, while most other lighting comes standard as LED. 17″ aluminum wheels are standard, as are all-season Michelin Energy Saver tires with Selfseal puncture-sealing technology. 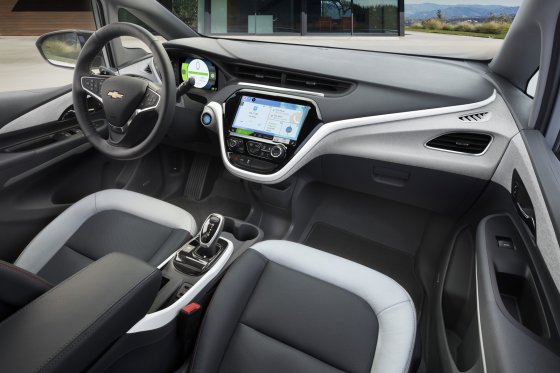 The interior of the 2018 Chevrolet Bolt EV is open, airy, and modern. There is plenty of visibility via the large windows, and an upright seating position mimics larger crossovers. We’re fans of the two-tone interior, and the styling inside the Bolt is new and hip, without being over-the-top. Electronic Precision Shift, a shift and park by wire system, frees up space allowing for more storage and an open center console.

The brilliant 10.2 inch color touch-screen display dominates the dash, and we found its tablet like operation to be intuitive and easy. As you would expect from an electric vehicle, there is plenty of data offered to help maximize driving efficiency, and alleviate range anxiety. An Infotainment Package is available on the Premier trim that includes Bose premium seven speaker sound system, wireless device charging, and two USB charging ports for rear passengers. Chevrolet also includes their OnStar 4G LTE with Wi-Fi hotspot (three-month/3GB data trial).

We drove the Bolt EV during one of the last weeks of winter, so we definitely appreciated the heated front seats and automatic heated leather-wrapped steering wheel when the freezing rain started falling. 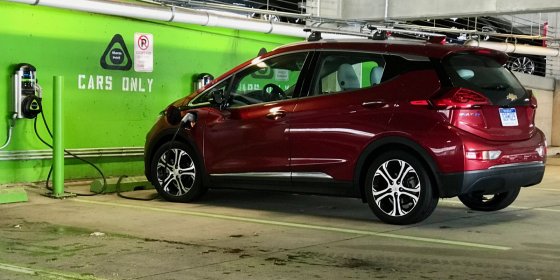 While the exterior and interior design and features are important, we understand potential electric vehicle customers are most interested in battery range, charging and performance. For anyone switching from gas to electric, there is understandable anxiety in regards to range and charging. In our experience, this is one area where the Chevrolet Bolt EV really shines when compared to some of its lesser range competitors. The estimated 238 mile range from the 60 kWh lithium-ion battery pack on the Bolt is a definite selling point, but whether you get that far on a full charge will depend on many factors.

The Bolt EV’s drive system uses a single, high-capacity electric motor capable of producing up to 266 lb. ft of torque and 200 horsepower. That helps propel the Bolt EV from 0-60 mph in 6.5 seconds. This type of acceleration is something that comes as a surprise to many new EV customers, who don’t expect that much power. While it excels at quick acceleration and has great range for city driving, where the Bolt may struggle is at high-speed situations on the highway, where you might drive 70 – 80 MPH for extended periods of time. Here you’ll find the Bolt (and most EVs) is less energy efficient and may not accelerate as well as your old gas vehicle. 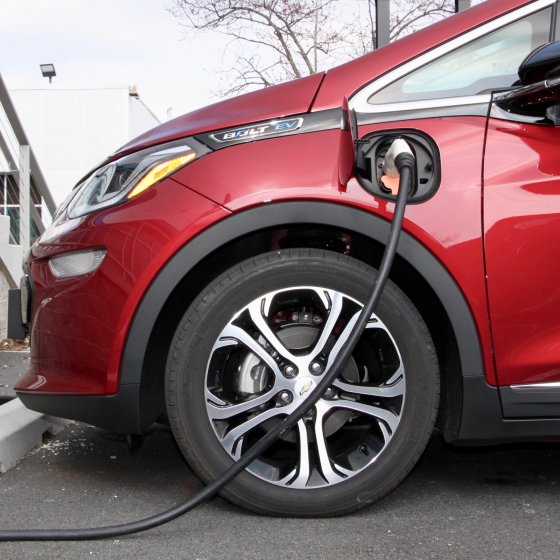 You’ll also probably find that charging stations aren’t as available on those long stretches of open highway either, and when you do find one, it may take awhile to recharge. This is really a vehicle designed for the cities and suburbs. It has plenty of range to get most people to and from work and to the grocery store or to pick up the kids as school. It even has enough range for road trips if you stick to metropolitan areas, but we wouldn’t recommend trying to take it across the country unless you’re up for a challenge.

DC Fast Charging is available, and enables the battery to be charged up to 90 miles of range in just 30 minutes. We gave this a try while eating lunch one day, and it was indeed impressive. We utilized the PlugShare app to locate charging stations in the our Baltimore / Washington region (many of the best free charging stations are at Chevrolet dealerships), and would recommend anyone shopping for an EV to do that same before making a purchase. We had no difficulty finding plenty of charging stations to keep us juiced up, and the impressive range meant we didn’t need to charge up nearly as often as you would expect. 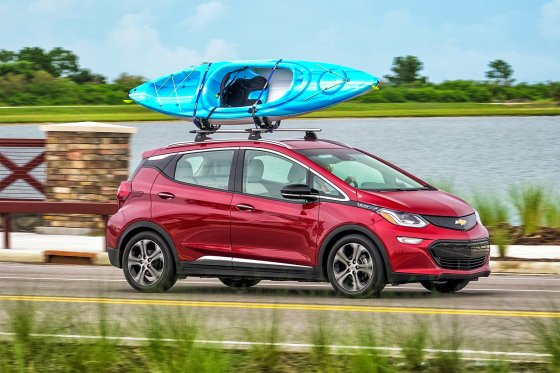 Driving the Chevrolet Bolt EV was honestly quite fun, it feels a bit like a Go-Kart. For even better energy performance, you can enable full regenerative braking for one-pedal driving. That takes a bit of acclimation, but in its regular mode, the Bolt EV drives just like any other vehicle, with tons of torque. 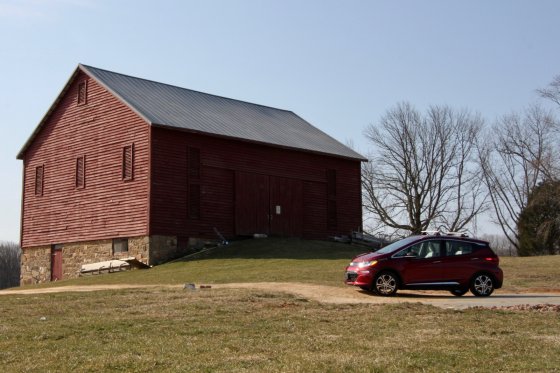 The 2018 Chevrolet Bolt EV is a big leap forward for the electric vehicle industry, and at the moment provides one of the most compelling offerings in the EV segment. It provides plenty of range for most drivers, and is surprisingly responsive and fun to drive. The roomy and fresh interior is a pleasant place to experience, and even though exterior styling is a bit polarizing, it’s more mainstream than most of its competitors. We think it has just enough quirkiness to standout, but your father shouldn’t be embarrassed to ride with you. Pricing (before benefits or tax incentives) starts at $37,495 with DFC, which makes it just under 30k after the $7,500 federal tax credit.