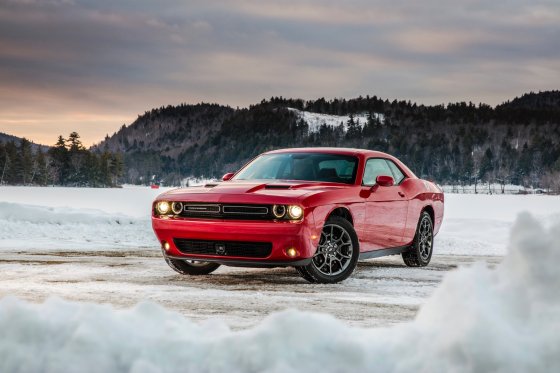 In our minds, the Dodge Challenger GT is the ultimate homage to Bo and Luke Duke and is the car that the Hazzard boys really wished they could have had. It took some time rallying in the dirt and doing power slides in the snow for us to forget about our disappointment in the lack of a bigger engine for the Challenger GT model. It’s easy to appreciate the 2018 Dodge Challenger GT for what it is without that baggage once some time has been spent in this seriously well-done AWD coupe.

The 2018 Challenger GT hasn’t changed much from our drive in the 2017 model year. What’s changed is our perception of the car, especially now that we’ve spent so much time behind the wheel and in so many different driving scenarios.

In our week with the Challenger GT last year, we drove in dirt and sand, throwing dust to the wind as the big car’s tires spun through like a rally champ. This year, we spent time on a frozen lake in Colorado doing the same thing in the snow and ice during the Redline Ice Drive. Shortly after that, we had the 2018 Challenger GT show up in our driveway for a week-long stint of winter driving in Wyoming as a daily-use car.

Those experiences have shown us that in the 2018 Dodge Challenger GT, there is a beautiful connection between muscle car goodness and realistic daily use design. Without becoming a watered down version of either. 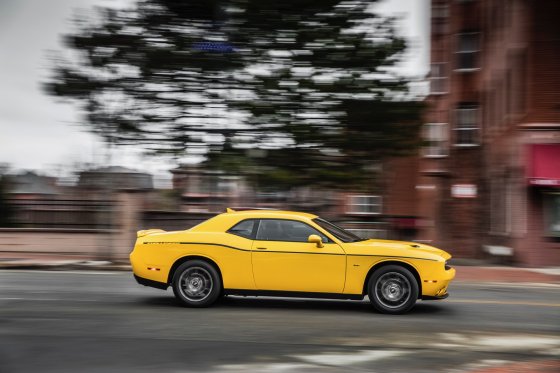 On the outside, the 2018 Challenger GT looks like most Challenger models. That is to say it’s a big, beefy, truly American muscle car. A few GT badges and some slight adjustments to wheel appearances are the only really differences. As with all Challengers of this generation, the 2018 model takes its inspiration from the legendary early 1970s Charger.

That all-American look works well for the Challenger and the feeling is only enhanced by the small, integrated spoiler on the deck lid, the body striping on our particular test vehicle, and the Dukes of Hazzard orange paint that we think should be mandatory on all Challenger models. 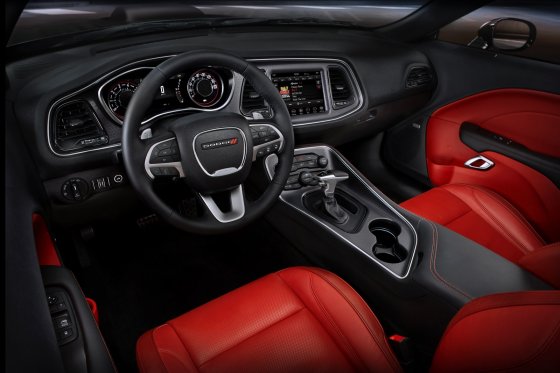 When it comes to interiors for sports cars, nobody does it as well as Dodge does. The interior of the 2018 Challenger manages to be both bulkily muscular and comfortably useful. With the largest back seat in the class and some great infotainment behind that big 8.4-inch screen, the Challenger does things right.

In the GT model, the interior of the Challenger is similar to what’s found in most base or mid-level Challengers. A T-shaped shifter lever, big buttons, and a very readable instrument cluster are high points. Pedal placement, controls placement, and the coddling way the bolsters of the driver’s seat hold one in place are testaments to the ease of use the Challenger offers during both daily driving and performance handling. For the latter, be sure to familiarize yourself with the location of the traction control button (bottom left of the hazard lights button). Holding this button for a few seconds will turn off both traction control and AWD, pushing power to the rear wheels for rear-driven fun times when desired. 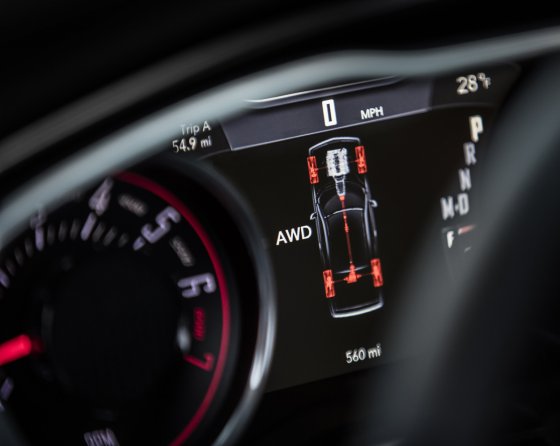 Outside of the excellent comfort levels, the highlight of the 2018 Challenger GT’s interior is in its infotainment. Chrysler’s Uconnect system is easily the best in the business with great voice controls, solid voice-to-text functions, clear graphics, and fast menus that are easily navigated. 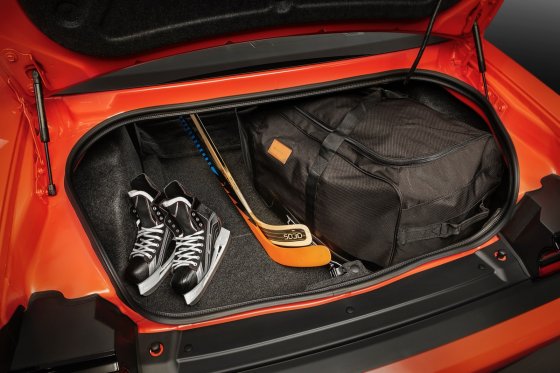 Another highlight is the kid-friendly back seats (adults can sit there too, though it is a bit cramped) and huge trunk space the Challenger sports. A true Jersey three-body, the trunk of the Challenger is enormous and accommodating. 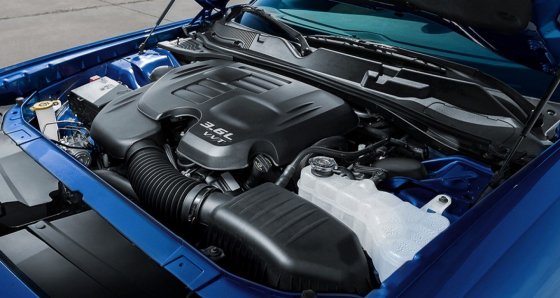 Where the rubber meets the road, as it were, is in performance in this muscle coupe. Power in the 2018 Dodge Challenger GT comes courtesy of a 3.6-liter V6 that outputs 305 horsepower and 268 pound-feet of torque. Standard all-wheel drive split is 30:70 front to rear, with adjustments forward or back as needed. With AWD off, the Challenger GT is rear-wheel drive.

Ingeniously, under most driving conditions where traction control is not at issue (such as highway commutes, driving around town quietly, etc), the Challenger GT acts as a RWD muscle coupe for maximum fuel economy. The front axle is disengaged via a magnetic clutch. It’s the same system used in the big Chrysler 300, with which the Challenger shares much in common. Fuel economy is rated at 27 mpg on the highway and 18 mpg around town. Our average was about 22 mpg this year and 21 mpg last year, making the Challenger GT more efficient than most would expect. 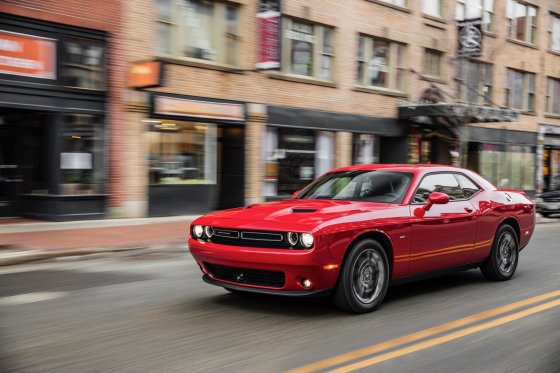 On pavement, the average driver can expect to get 6.9-second 0-60 mph times out of the Challenger GT. Professionals will get under 6.5. Top speed for the 2018 Challenger GT is 130 mph with the sweet spot in the engine’s power band coming at about 5,200 rpm.

What we learned last year was that out in the dirt, the Challenger GT is definitely in its element. This big coupe just wants to slide, shimmy, throw dirt out of its way, and drift happily around corners. This year, we learned that the same is true in winter driving conditions. 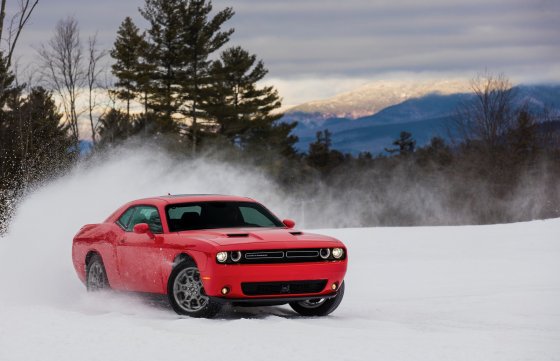 When safety is the concern, leaving the traction control and stability systems on will result in good winter driving dynamics impeded only by the big car’s bulk. If the driver keeps a steady hand and feathers the throttle, though, the Challenger GT will be one of the safest vehicles on wintry roads. When fun is to be had, turning off traction control can result in spectacular ice lot brodies, snow drifting, and more.

During normal driving in everyday situations, the big 2018 Challenger GT is a smooth, well-balanced machine with a confident air about it. Visibility is not as good as one might hope, due to the small greenhouse and heavy pillared design of the Challenger, but getting around for normal driving needs is easy in this big car. 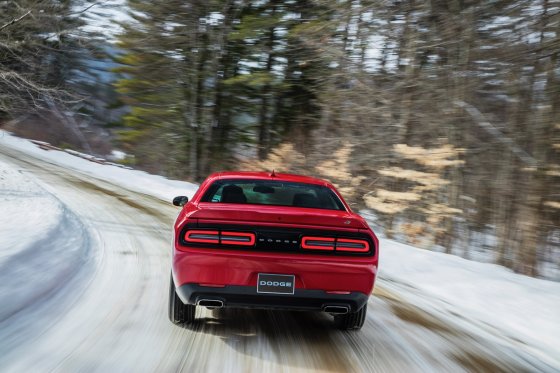 The 2018 Dodge Challenger GT is a whole lot of fun in a myriad of situations. The confidence of AWD brings a lot to the big coupe while the excellent daily use ergonomics make it a truly useful car beyond playtime. Neither of those things detracts from the truly Americanized muscle that is the Challenger’s heart and they don’t mean that the fun of a muscle car is lost in the Challenger GT. It’s only made better.

We’ve grown to be genuine fans of the big Challenger and are enamored with the GT model and its capabilities. The starting price for the Challenger GT is about $35,000.