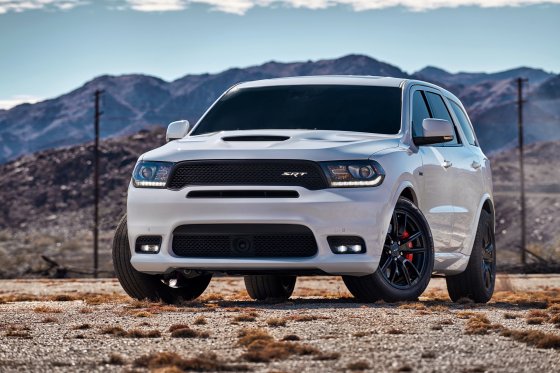 The 2018 Dodge Durango SRT is an encapsulation of the Dodge mindset. The company has made a name for itself not with mainstream cars, normalized sport utilities, or futuristically questionable design motifs. Nope. They’ve made their reputation based on shoving as much muscle as possible into designs as powerful-looking as possible. The universal design characteristic of Dodge vehicles is a muscular, growling appeal. 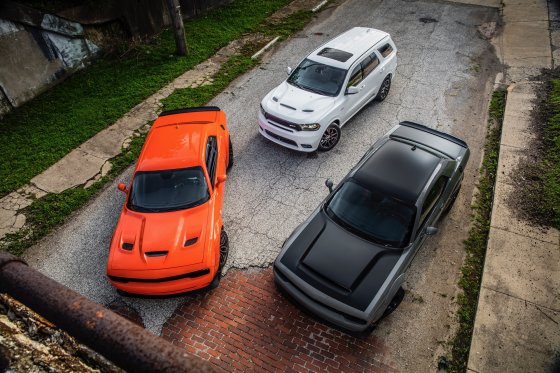 It’s an idea that’s easy to make light of, but which resonates immediately once it’s been experienced. Oddly enough, the Durango just feels natural with all that horsepower on tap. The 2018 Durango SRT is very well-built and intelligently designed. 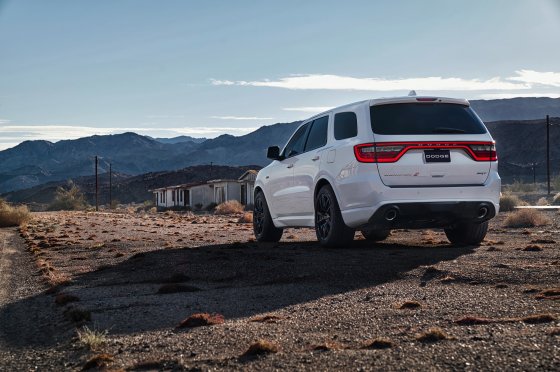 So beyond the American muscle appeal of the Durango SRT lies a vehicle capable of uniting the things performance-oriented adults might want with the practicality required when kids and grand-kids get involved. 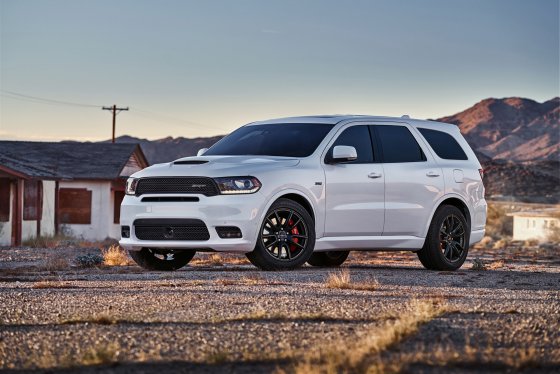 On the outside, the 2018 Dodge Durango has a muscular, ready-for-business appeal that’s packaged in a sleek, American way. This generation of the Durango has been around for about six years, with only nominal changes to its exterior look. The crossbar front grille, heavy body styling, and weighty rear end are all components which create the Durango’s persona.

For the SRT model, Dodge changed a few things to add more appeal. Blackout-style paint and finish options are all the rage with Dodge and the SRT has several color schemes to cater to that; all of which look great on this bulky drive. Added are SRT logos, bright-colored Brembo brake calipers, some open wheel design options to showcase the heavy-duty brakes, and a very aggressive hood.

The hood features the same intakes and scoops found on other SRT models with the 6.4L in them, such as the Challenger and Charger. These up the power-hungry appeal of the Durango SRT and follow its more aggressive curb stance as well. 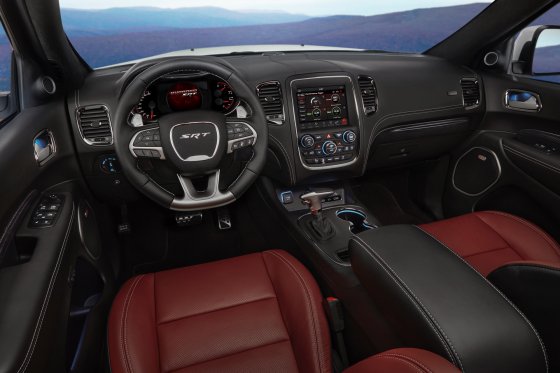 Inside, the 2018 Dodge Durango is a very comfortable, ergonomically-designed family hauler. With seating for up to seven, this is a great option for families who don’t want the usual minivan or boring crossover. With the SRT model, things change a bit, but that core excellence remains.

Seats in the front row become heavily bolstered with SRT stitching and lots of “cupping” for performance comfort. Most people will find them to be very comfy and nicely done. I am firmly in the “big and tall” category and really enjoyed the SRT seating on the driver’s side.

The 2018 Durango SRT seats six, with a second row made up of captain’s chairs and the third row being a two-seat 50/50 bench.

For the Durango SRT, we really like the revised instrument cluster with better visibility and a more sport-tuned appeal. We also like the added red details found throughout the cabin as a nod towards the model’s SRT emphasis. Ride quality is still very good, though, despite the performance tuning that the Durango SRT receives.

Also remaining is the huge 84.5 cubic foot cargo space when second and third rows are folded. A flat loading floor and large rear tailgate make this even more useful. 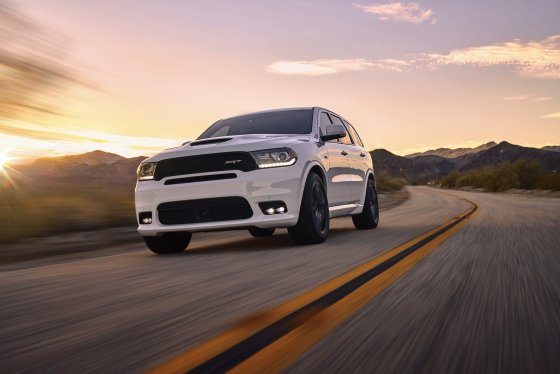 Before we look at the 2018 Dodge Durango SRT’s purely nutjob performance specs, let’s get some perspective by looking at the specs of the standard Durango model. It’s powered by a 3.6-liter six-cylinder engine that outputs 293 horsepower and 260 pound-feet of torque. Not too shabby, really, and an eight-speed automatic transmission powers the rear wheels or, optionally, all four. 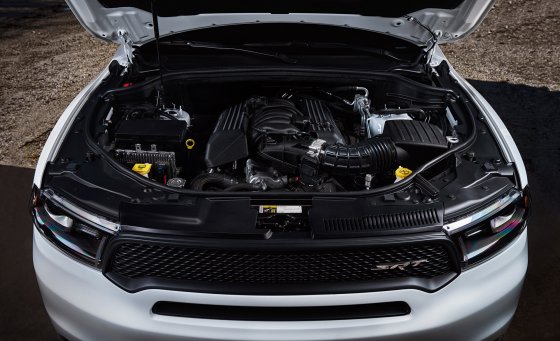 The hitherto go-to performance model for the Durango has been the R/T edition, which replaces that V6 with a 5.7-liter V8 that churns 360 horses and 390 lb-ft. Suspension tuning and other items are also included for this performance upgrade. Again, RWD is standard and AWD is an option. 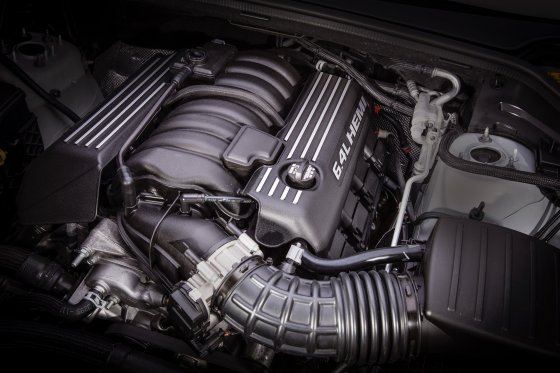 Now for the Durango SRT. As if that 5.7L wasn’t enough, Dodge engineers put the massive 6.4-liter V8 from SRT into the Durango. This engine rumbles at idle and screams with accelerator application, ripping out an impressive 475 horsepower and 470 pound-feet. All-wheel drive is standard as is the eight-speed automatic with paddle shifting. 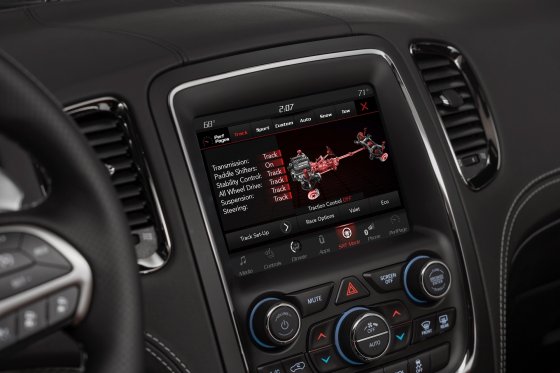 Tuning in the 2018 Dodge Durango SRT includes a lot of suspension and steering modifications to handle the kind of torque output and hard handling a vehicle like this requires. An electronically-controlled, limited-slip differential helps keep the tires rotating without breaking and an adaptive suspension system keeps the Durango SRT wheels-down while making ride quality very good when just cruising versus when pushing the limits. 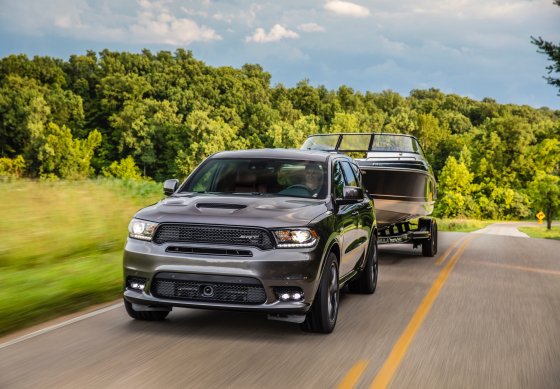 Towing in the standard Durango V6 is rated at 6,200 pounds and a very impressive 8,700 pounds with the SRT model.

So here’s the rub. The 2018 Durango SRT is rated as having a 4.4-second 0-60 mph time. We were easily able to beat 5 seconds on public roads. That’s extremely fast. Especially for a big sport like this Dodge. Those impressive numbers, though, barely scratch the surface of what the Durango SRT is like. 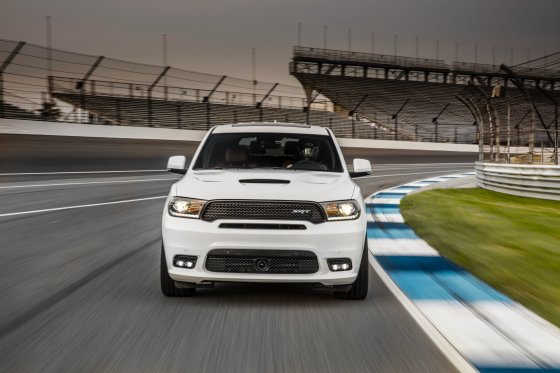 It’s pure adrenaline-powered joy. The Durango SRT’s engine sounds, performance rumble, and body shake are all viscerally satisfying in a way that only a muscle car can deliver. Yet it’s comfortable and family-friendly, keeping it realistic. The Durango SRT is a big crossover, yes, so it won’t corner like a Porsche or screech around the track like a Viper. At the same time, it’s well-tuned for performance regardless and will feel like fun on any twisty highway, fast-paced country road, or during a weekend at the track. It’s hard to argue with your gut and your gut will tell you that the 2018 Durango SRT is a muscular winner with “hell ya!” written all over its innards.

Where performance comes, fuel economy must fall. The V6-powered Durango is EPA-rated at 21 mpg combined whereas the SRT is rated at 15 mpg combined. We were able to get 20 mpg on the highway in the SRT, but only if conditions were right. 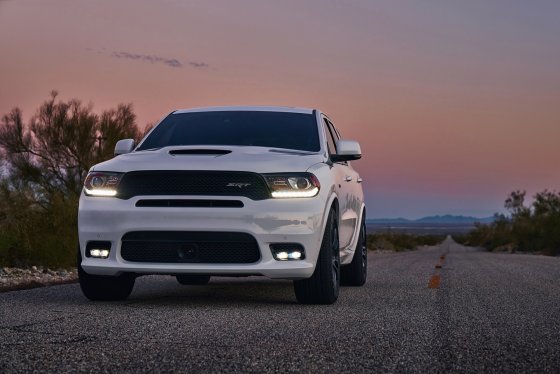 The 2018 Dodge Durango SRT is a uniquely American idea, combining huge amounts of muscle power to what is otherwise a practical, family-friendly vehicle. The Europeans have their shooting brakes and high-end luxuriously-bedecked sport utilities with supercharging and thick suspensions. Americans? We have an SRT-powered Durango that lets out the kind of roar that only a V8 whose thirst exceeds three soda bottles can muster. The kind of booty-shaking, testosterone-satisfying grumble that a huge eight-cylinder engine stuffed into an unlikely machine can offer.

The 2018 Durango SRT is exactly that kind of awesome. It’s like track day for the whole family, even if you never actually leave the day-to-day shuttle bus duties that make up most of our family driving lives today.