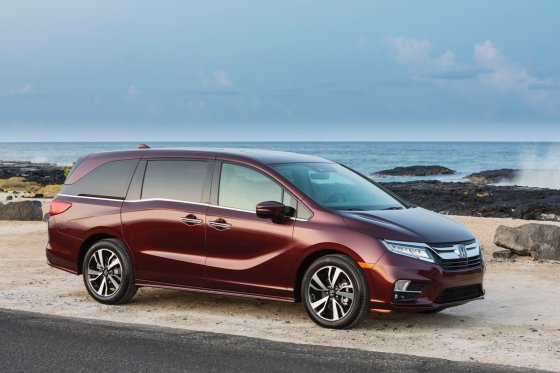 Many have been under the impression that the minivan is on its way out, dying the slow death of a thousand crossover pricks. Yet the market seems to have other ideas as both leading van sellers in the game have brought out new generations of their vans. With Chrysler coming out with the Pacifica and now Honda bringing out a new-generation Odyssey, it looks like minivans are back in the game.

The Honda Odyssey was introduced in 1995 and quickly became one of the best selling vans on the market. Although sales are now far lower than they were in the heyday of minivans two decades ago, the appeal of a big, comfortable, even luxurious ride with tons of interior real estate continues to bring customers to the lot.

The 2018 Honda Odyssey seats up to eight with easy access via double sliding doors and a huge rear hatch. The basic appeal of a minivan lies therein, but the addition of six trim levels and some smart interior conveniences really help push this new-gen Odyssey forward. 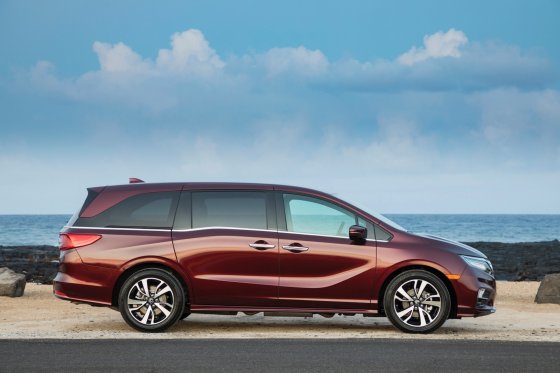 A minivan is, at its base, a square box with some wheels on it. There’s not a lot that can be done with that basic shape. Or is there? Honda tries heroically to make the 2018 Odyssey less of an eyesore than were vans of the past. They succeed, for the most part, by shortening the nose and lengthening the roofline to create a more forward-facing, speedy appearance.

Body lines on the 2018 Odyssey are abrupt and to the point. Fenders are almost non-existent, acting mostly as starting points for the body lines to create the van’s slight curvature and forward movement. This is done to good effect with the Odyssey.

In appearance, this puts the 2018 Honda Odyssey ahead of the Toyota Sienna, a serious rival in the people moving market, but doesn’t quite reach the excellence created with the looks of the Chrysler Pacifica. Where the exterior’s looks aren’t quite up to snuff against that rival, though, the interior gives it what-for on several levels. 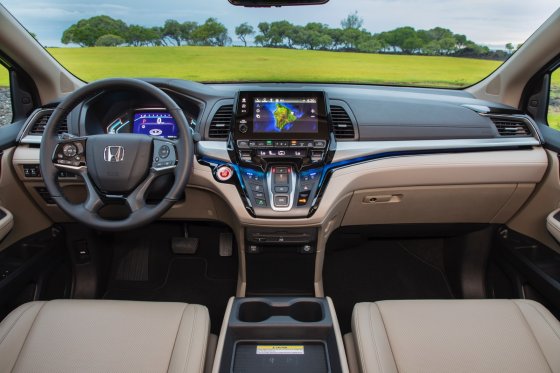 Inside the 2018 Honda Odyssey is a parents’ dream come true. With seating for everyone, lots of USB plugs and plenty of space for everything being toted along, there are further conveniences still proffered. A built-in vacuum, for one, has been an Odyssey staple for some time. So is the huge amount of storage up front for the driver and front passenger as well as the smart side bins and storage compartments found in the second and third rows. 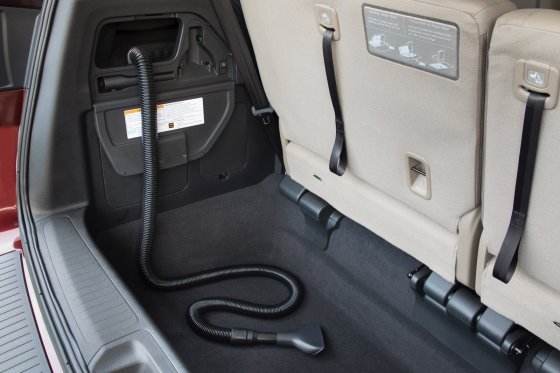 Speaking of the third row, the minivan, unlike most every other type of vehicle, offers adult-friendly (at least in theory) third row seating. The Honda really delivers that, with some great sit-down comfort back there. Access is easy as well, if the second row captain’s chairs (reduces seating to seven) are opted for. We recommend that. Even without it, though, the forward-sliding middle row and its tilt-forward design make getting in back a cinch. 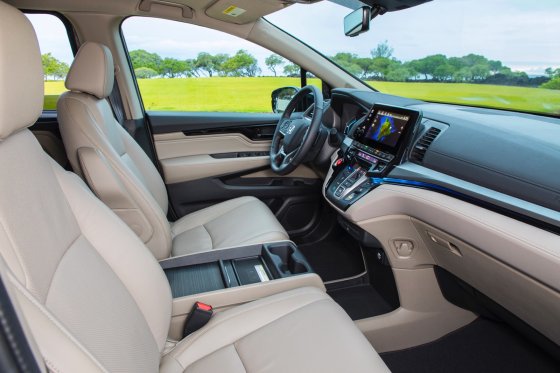 Also available is a huge amount of cargo space. We are especially fond of the optional bin covers available for the third row seating bins at the very back. Basically, when the third row is up, it creates large bins (where the seats fold into when down) that can be filled with stuff. With the covers, the bins can be filled and then more stuff stacked on top of the covers. Effectively doubling the floor space back there when cargo is at its most limited. Genius.

More interior excellence comes from the new suite of options for Honda’s infotainment and entertainment systems. The second row in the Odyssey can have the rear seat entertainment system with wireless headphones, a remote, and small TV screens in the seat backs. 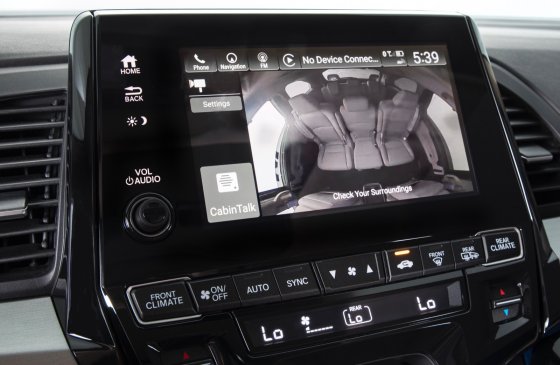 Also optional in the Odyssey is the in-cabin view system which allows the driver or front passenger to activate an in-cabin camera (situated just behind the center point between the driver and front passenger) which gives a full view of the cabin behind. An intercom system can be activated and, using the Bluetooth mics in the headliner, used to speak with the people in back. This works through any headphones plugged in or wirelessly connected to the car. This brings the obvious “This is your captain speaking..” dad joke. Probably repeatedly. I know I did it. 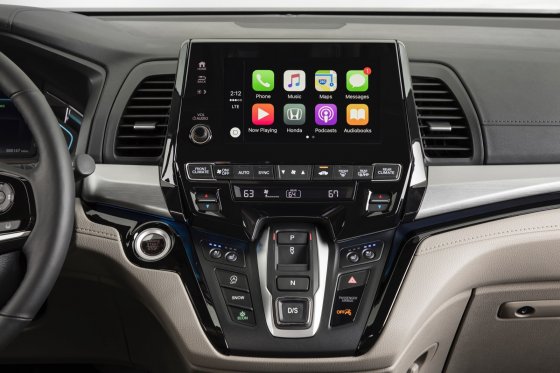 At the base level, the Odyssey’s touchscreen is only five inches big and has just basic functionality. Upgrading, though, adds a lot of features to this, including an 8-inch touchscreen with a more detailed resolution. Honda’s new user interface is much more responsive and crisp than was the outgoing. Apple CarPlay and Android Auto are more integrated as well and we definitely noted a less glitchy experience with Android Auto than we’ve had in previous Honda products. 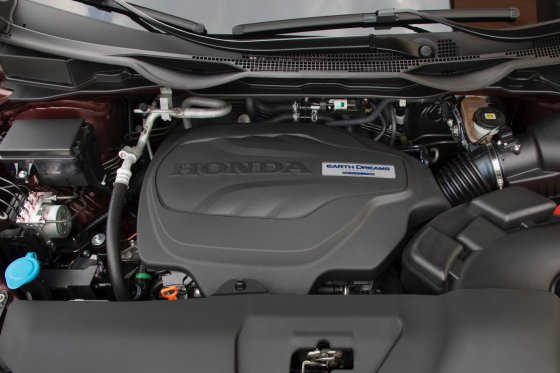 Driving the 2018 Honda Odyssey is a re-tuned 3.5-liter V6 that outputs a respectable 280 horsepower to a nine-speed automatic transmission. We like the transmission in the new Odyssey a lot, as it gives more seamless shifting and better lower-end response for the engine. Front-wheel drive is the only option in the Odyssey.

The drive in the new Odyssey is good, though not exactly punchy or spirited. Most Honda owners are used to having a lot of umph at the lower end, especially out of lights and stop signs, but the Odyssey eschews this in favor of a more level-headed, even keeled approach. This makes for a more confident, less spaztic drive quality and really pays off at higher speeds when that umph is really going to be needed to execute the pass or get on the freeway for a merge. 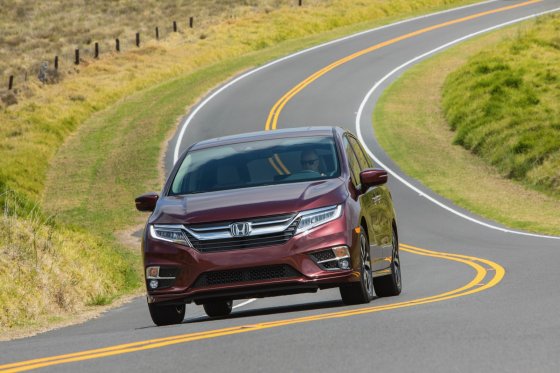 Out and about, the 2018 Odyssey is maneuverable and smart. It’s not the quickest vehicle on the road, but it’s no slouch either. The upgraded sound dampening and noise-vibration-harshness deadening in the new Odyssey is very noticeable at highway speeds, where the cabin is as quiet as any luxury vehicle we can name. Well done there.

Fuel economy in the 2018 Honda Odyssey is EPA-rated at 22 mpg combined, with 19 mpg in the city and 28 mpg on the highway. During our week with it, the 2018 Odyssey returned close to those numbers, averaging about 20.5 mpg in all. That was at 5,400 feet in altitude, during the winter. We think most owners in more average driving conditions will see close to EPA estimates with their Odysseys. 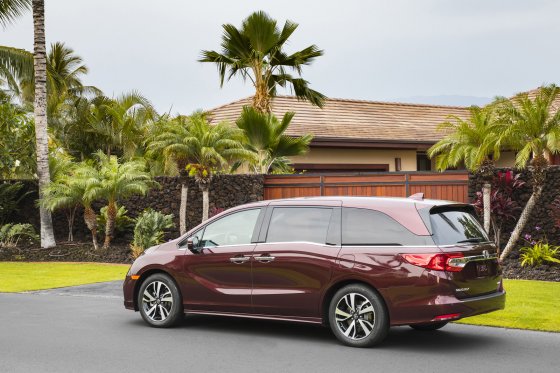 We spent a week and about 250 miles of driving in the 2018 Honda Odyssey, using it as an everyday vehicle with various passenger and cargo loads. We averaged three passengers per trip, sometimes going up to six and other times flying solo. We carried gear ranging from the usual “kids stuff” to birthday party accoutrements and so on. A few items of furniture were also hauled in the Odyssey at one point.

During all of that, we were impressed by the 2018 Odyssey’s ability to adapt and get the job done without complaint. The ergonomics and family-usefulness of this minivan cannot be overstated. We highly recommend the Elite model, which we tested, as the luxury model of choice for its bevvy of interior tech and excellent comfort. The next-down Touring model is also very well outfitted. 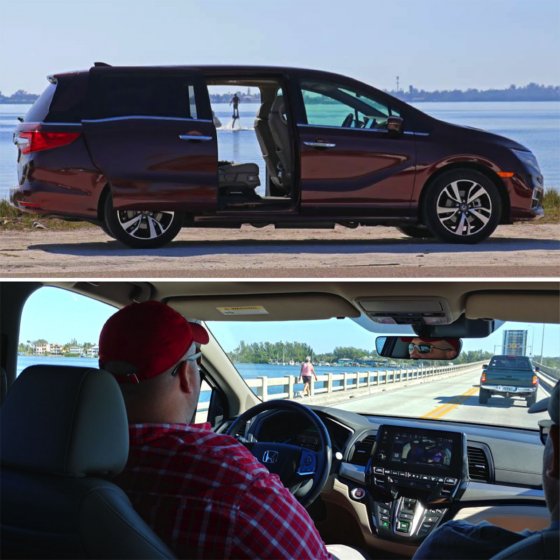 In addition to the loan for this review, we also had the chance to drive a 2018 Honda Odyssey on our recent trip to Anna Maria Island, Florida.