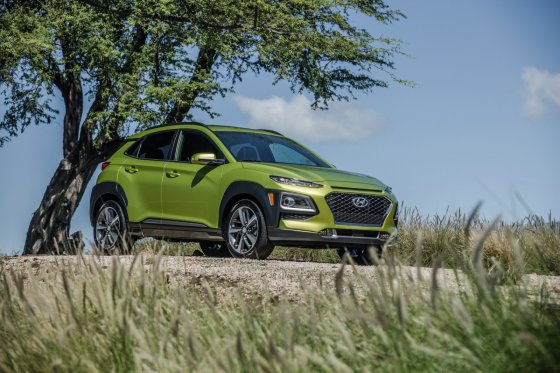 The 2018 Hyundai Kona is an all-new subcompact crossover-SUV from Hyundai. The Kona shares elements from other Hyundais like the Tucson, the Sonata, and the Santa Fe Sport. Mostly all of the good ones, we note. The Kona sits just under the Tucson as the brand’s smallest crossover.

The strengths of the Kona lie in its good looks, excellent powertrain options, and value orientation. It’s weaknesses are in some interior elements and base powertrain. Those low points are shared with most of the compact segments, though, and the 2018 Kona remains one of the best compact crossover options we’ve seen thus far.

From the base model Hyundai Kona at about $19,500 to the top-line Kona Ultimate as we drove it ($29,775), there are four trim levels, two engine and transmission options, and either front-wheel or all-wheel drive to choose from. 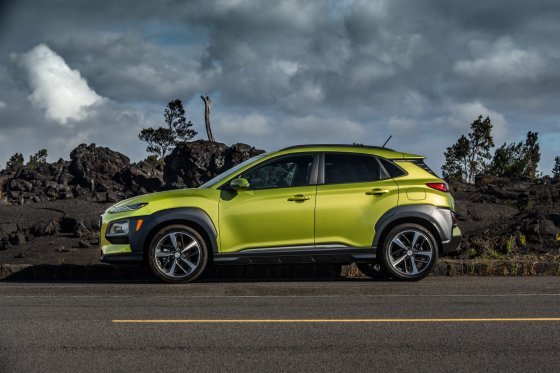 There seem to be two approaches to exterior design in the subcompact crossover class: go really edgy and somewhat weird or go as square-box mainstream as possible. The 2018 Hyundai Kona hits a midpoint between those two edges, offering a more moderate look that isn’t so blend-in that it gets lost in the crowd.

The Kona’s front fascia is very much like the Sonata’s, taking plenty of hints from that car as well as from the Kona’s larger sibling, the Tucson. Other styling cues along the bodywork and rear hatch are from the Santa Fe Sport, with its fast-paced appeal and emphasis on interior roominess.

A wide diamond-shaped grille, thin headlamps, and small faux induction intake are all hallmarks of the new design language going on at Hyundai. The Kona sports these plus a robust-appearing approach angle and ground clearance that give it a better curb presence. The latter points are emphasized by thick wheel well surrounds, but all of this is tempered by the sleek body styling and forward-running silhouette of the Kona’s design.

The 2018 Kona has a somewhat contemporary, but not cookie-cutter look that will suit it very well in a marketplace full of polarizing designs and sigh-inducing lack thereof. 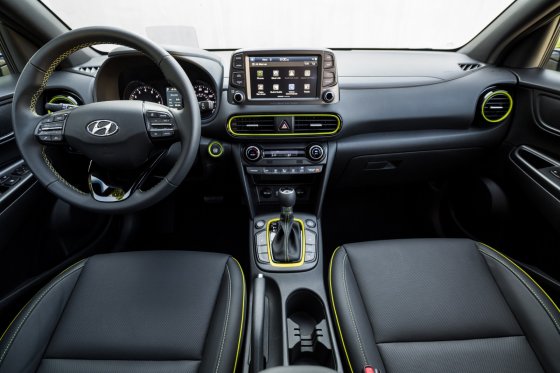 Inside the 2018 Hyundai Kona is a well-done, but not exactly awe-inspiring interior design. The use of quality materials and good texturing to hide lower-cost plastics is nicely done in the Kona, but unless special packages are opted for, there’s not a lot of contrasting adornment in the Kona to keep the eye interested. Luckily, there’s a lot of room in this subcompact.

The front seating in the Kona is really well done, with plenty of headroom, legroom, and shoulder room for even large folks like myself at 6-foot 3-inches and over two hundred pounds. Even padding points and elbow rests in the Kona are well-placed, which is unusual in the lower-cost segments.

We like the driver’s controls placements, the optional head-up display, and the excellent center stack design with a well-placed infotainment screen and good climate controls. Behind the front seats, the rear seating is also good. This being a subcompact, there won’t be any NBA players squeezing into the rear seats of the Kona, but the roominess back there is better than most subcompacts can claim. Three across is possible, but not likely to be manageable for more than short distances. Surprisingly, most average people will have decent legroom in the back seat outboard positions.

Cargo in the 2018 Kona is also good for the class. There are 19.2 cubic feet of it behind the rear seats and a shallow tray below the floor lifts up to give enough room to hide a purse, computer bag, or something similar. That tray can be locked in position for groceries as well. The rear seats are split-fold as standard, adding even more cargo space when needed. 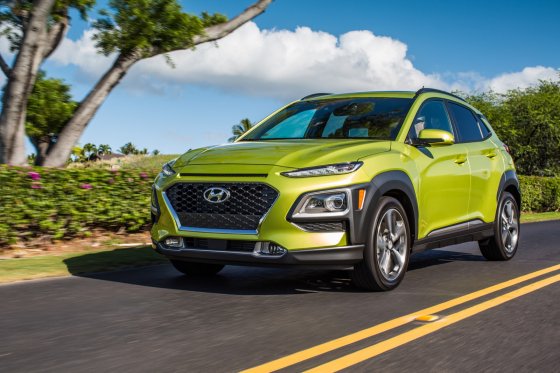 Where the 2018 Hyundai Kona got its most benefit from the well-done Hyundai Tucson is with performance. The standard engine is a 2.0-liter four-cylinder mated to a six-speed automatic transmission. Producing 147 horsepower, this engine is just barely enough to get the Kona going without too much struggle and the transmission does a decent job of helping that happen with smart shift points tuned to the driver’s throttle inputs.

Where the Kona shines, though, is with the upgrade found in the top two trim levels. This is a beautiful 1.6-liter turbocharged four-cylinder that is coupled to a wonderful dual-clutch transmission that offers quick shifts and no hesitation in downshifting for more umph. This setup comes directly out of the Tucson, as do several drivetrain and chassis improvements to match. This is where it’s at when it comes to feeling confident behind the wheel of the Kona. 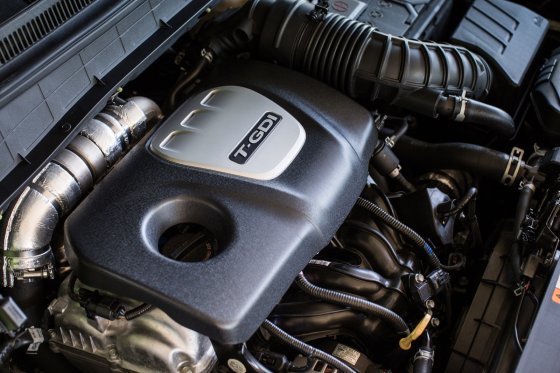 We also recommend opting for the AWD option, even if your area doesn’t have weather to justify that much traction. Why? Because with the AWD upgrade comes rear suspension and a better overall drive quality with not much MPG loss to pay for it. The AWD models ride and drive better. 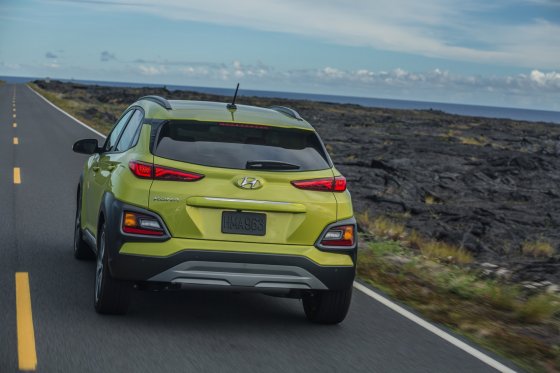 The fast-growing field of subcompact crossovers is currently the hottest segment in automotive. There are a lot of options vying for attention against the new Kona, but only a few of them are truly matches for it. Most are exploiting a specific niche of style or capability (think CH-R and Renegade) while others are emphasizing interior roominess over exterior looks (e.g. Trax). The 2018 Kona, however, finds a middle ground that few others have been able to hit and for that, we think it’s one of the best options available now.

The 2018 Hyundai Kona brings a lot to the game and even sets some benchmarks for others to meet. We like the Kona’s mixture of design, comfort, utility, and sporty drive qualities. It’s well worth adding to the short list of possibilities in the subcompact SUV market.

Want to see how the AWD Hyundai Kona performs off-road? Check it out against some larger competition in this video from the Trail Trek Tour’s Compact Crossover Off-Road Challenge :