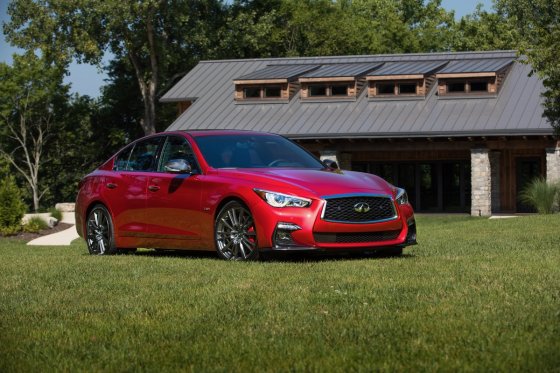 The 2018 Infiniti Q50 is one of those ageless cars that looks good now and will look good in 50 years. Like fine wine or a woman of character, the Q50 holds its age and gets better with it. The Q50 is currently in its middle age in terms of automotive design, but carries it very well.

For 2018, Infiniti gave the Q50 a light refresh with some options shuffling and light updates to the front fascia. We’re fans of the timeless look of the Infiniti Q50 in this generation, its quality-minded, comfortable interior and its solid road presence.

The 2018 Infiniti Q50 does have some quirks, though, and we’d be remiss if we ignored those. The dual infotainment screens are problematic, for one, and the fuel economy returns (even in the hybrid model) are less than stellar.

Still, there’s a lot to love in this midsize luxury sedan. 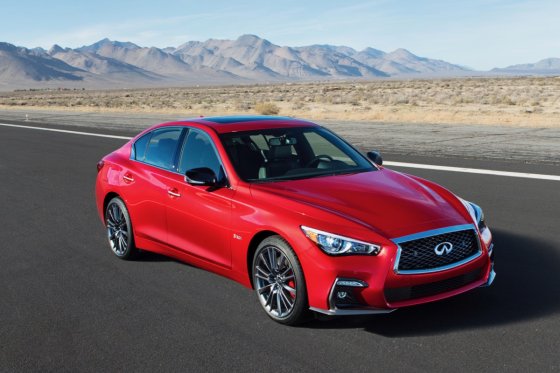 The 2018 Infiniti Q50 is by far one of the best looking sedans on the market today. It’s a beautiful car with an understated front grille, hawkeye headlamps, and a beautiful, arched curve to the hoodline that all come together as refined excellence. The front fascia sees a couple of changes this year, all of which enhance the Q50’s great look. A narrower appearance to the headlamps and extra lines on the lower intake edges bring out the forward motion of the 2018 Q50.

Bold lines on the hood and upper front fenders create the motion that the Q50 carries in its overall design. This flows through the bodywork and over the roofline to the understated rear haunches and freeflow deck lid at the back.

The clear and undeniable statement made by the 2018 Infiniti Q50 is one of luxurious sport unmuddled by unreachable promises or outlandish expectations.

Inside the 2018 Infiniti Q50 carries excellent workmanship and fine quality in its design and materials. This is broken only by the dual infotainment screens at the center of the stack, added as almost an afterthought. The screens are set into the stack, pinching other controls downward. These screens are often at odds with one another to see which will glare the most and how many finger smudges can be collected in some kind of childish competition. It just doesn’t fit well with the otherwise very refined and luxurious interior accoutrements found in the Q50.

Despite the sad design of the generally functional infotainment system, though, the Q50’s interior is beset with excellence throughout. The front seating is superb with good bolstering and enough coddle that long drives won’t become tedious. Driver’s controls are well-placed and easy to manipulate while storage for the driver and front passenger is well-considered.

In the back seats, things are almost as good with wonderful outboard design for rear-seated passengers and plenty of legroom and headroom for just about everyone. The middle seat is, as should be expected in this segment, a bit cramped and uncomfortable in comparison and is further hindered in the all-wheel drive model Q50.

The standard 2018 Infiniti Q50 carries about 13.5 cubic feet of storage space in its trunk and has split-fold rear seating to add more space when required. The Q50 Hybrid model has a bit less space and the pass-through isn’t as accessible. In both models, adding the optional spare tire in the trunk reduces storage space further. 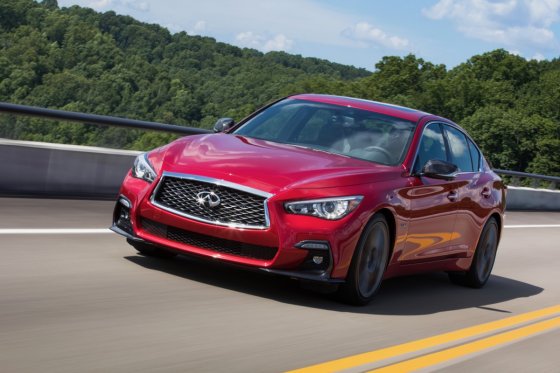 The 2018 Infiniti Q50 has some solid engine options in its lineup, though none of them produce high fuel economy returns. For a performance sedan, the 2018 Q50 offers two turbocharged engines in three configurations. The Q50 Hybrid model offers a fourth option with slightly better MPG and similar performance metrics.

We drove the mechanically unchanged 2017 Infiniti Q50 2.0t last year, with its turbocharged four-cylinder engine that outputs 208 horsepower and 258 pound-feet of torque in a fairly broad curve. This is peppy and fun to drive with a solid amount of power for the Q50’s size. Front-wheel drive is standard and all-wheel drive is optional with EPA ratings being 23 mpg in the city and 31 mpg on the highway. We saw close to that in our average after a week and think most will see at or near the EPA’s estimates for this model. Base price for this model is $34,200.

This year, we drove the 2018 Q50 3.0t with its larger turbocharged V6 that outputs 300 horses and 295 lb-ft. This adds a lot more muscle to the car’s get-up and feels very good for it as a well-balanced option for middle tier performance. Buyers of the Q50 3.0t will be hard pressed to find a better price option for similar performance. Base price on the 3.0t is $38,550. 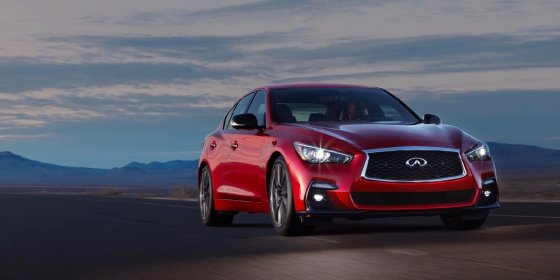 The upcharged 2018 Infiniti Q50 Red Sport 400 uses the same 3.0-liter V6 pumped to 400 hp and 350 lb-ft. A few changes to the already well-balanced and nicely-tuned chassis are added to cope with the huge jump in performance, along with a few Red Sport-exclusive options for this muscular sports sedan. This is the all-out option for the Q50 and is worth it if your goal is to outrun everyone else without worry of speed traps or fuel economy. The base MSRP for the Red Sport 400 is $51,000.

Speaking of that, the 2018 Q50 Hybrid carries forward with the hybrid-electric option from previous years, taking a less performance-driven 3.5-liter V6 (no turbos here) and mating electric motors for a total output of 360 horsepower. That’s not bad and the balanced weight of the hybrid’s batteries and propulsion system are tuned to keep the Q50’s signature road feel while the extra weight is compensated for with the higher power output. This results in a hybrid model that is similar in feel to the 3.0t standard model in terms of performance, but which boosts fuel economy to 27 mpg in the city and 32 mpg on the highway (versus 20/29 in the 3.0t). The base Q50 Hybrid starts at $50,600. 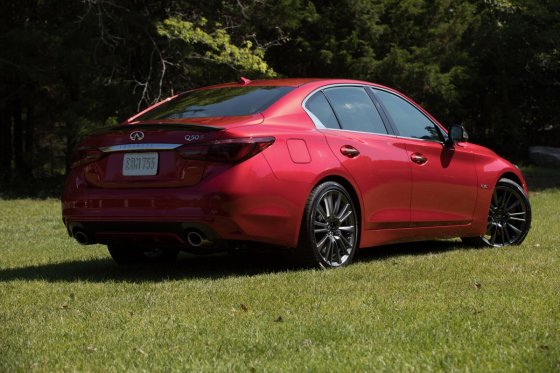 The 2018 Infiniti Q50 offers good value and smart driving for the money paid. We like the well-balanced drive quality and beautiful luxury fitments found in the Q50. We gripe about the infotainment, but otherwise have found little to fault with the 2018 Q50 as it is. In the luxury midsize sedan market, the Q50 remains a compelling favorite despite being an older design than most of its competitors.