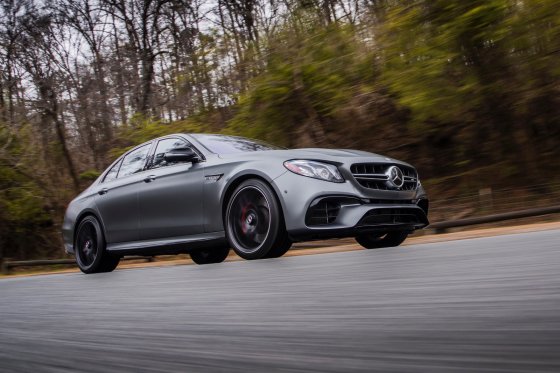 Just above the six-figure price point reside a few monstrous midsize performance sedans. We were fortunate enough to get a week’s worth of seat time in one of those monsters: the Mercedes-AMG E63 S.

With more than 600 rip-roaring horsepower on-tap and 4MATIC all-wheel drive in a top-tier luxury midsize car capable of hauling the family, the AMG-ified E Class is special. We won’t soon forget it. 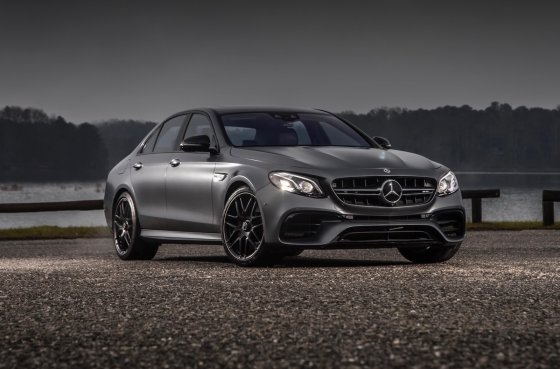 There are a few hallmarks of an AMG E Class on the outside of the car, but one almost needs to be a student of Mercedes-Benz and AMG to spot them. If you like a good “sleeper” as much as we do, the Mercedes-AMG E63 S is your kind of luxury rocket.

The body is basically the same as any other E Class sedan, with the subtle additions: AMG-specific wheels (there are five varieties), fender vents that denote the “biturbo” engine under the hood, a relatively tiny trunklid spoiler, a modified front clip with bigger air intakes, and quad square exhaust tips can be spotted among other minor body modifications.

Our test car was painted matte Selenite Gray Magno, which made it stand out from any crowd of vehicles right away, but that $3,950 option is not limited to the E63 AMG. Adding to the flat-gray menace were 20-inch blacked-out alloy wheels. Most of the AMG wheel options are not so dark.

Wrapping those dark wheels were sticky Michelin Pilot Sport 4 S tires — 265/35 front and 295/30 rear, all Z-rated. They had limits of speed and adhesion that far exceeded anything we should have been doing on public roads.

Useful features were plentiful on the outside of the car. In addition to the ventilation changes noted above, there was the AMG Advanced Lighting Package that gave the car LED intelligent headlights and adaptive high-beam assist. It works well to illuminate the road ahead without blinding oncoming drivers. If you’re throwing around AMG E63 S money, we’d call it $1,500 well-spent. 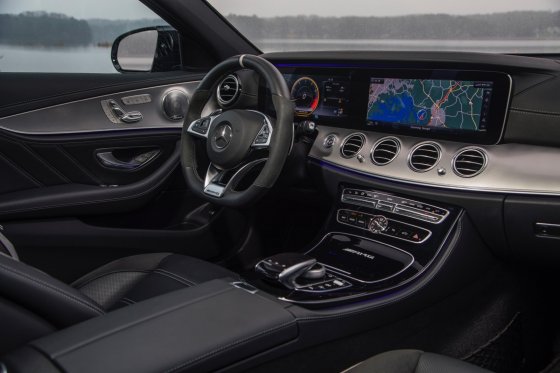 The inside of the Mercedes-AMG E63 S is sure to dazzle driver and passengers alike. Our favorite feature had to be the long, uninterrupted piece of glass in the dashboard that formed both the gauge cluster and the infotainment screen. It had a similar wow-factor to a glass cockpit in an airplane, and it was nearly as feature-packed as the screen array in a modern passenger jet. There was a way to control just about everything via those screens without even taking our hands off the steering wheel.

There was an ingenious design that made this possible. There were two touch-sensitive pads on the steering wheel — one for the left thumb, and one for the right thumb. Both pads acted a lot like a laptop touchpad. The left pad allowed us to scroll through options on the gauge cluster directly in front of the driver. The right pad allowed us to scroll through options on the infotainment screen, logically located to the right of the driver. It was seriously slick. Let’s not forget to mention the Burmester audio system in the Mercedes-AMG E63 S. It might have been the only thing louder than the 603 horses under the hood.

Seats were comfortable and not all that different from regular E Class seats, honestly. There are special sport seats available, but based on how hard we recall the sport seats being in the CLA AMG last year, we’re OK with the fact that someone missed that check box when ordering our test AMG E63 S. Front seats were heated and ventilated, with quick-heat capability that was nice on cold mornings. Front seats also included a variety of massage settings, which were either really nice or a little weird, according to various passengers who sampled them.

Rear seats proved roomy enough to haul a couple of children in child seats. The trunk, at 13.1 cubic feet, was plenty big enough to haul the groceries or luggage for a weekend getaway. 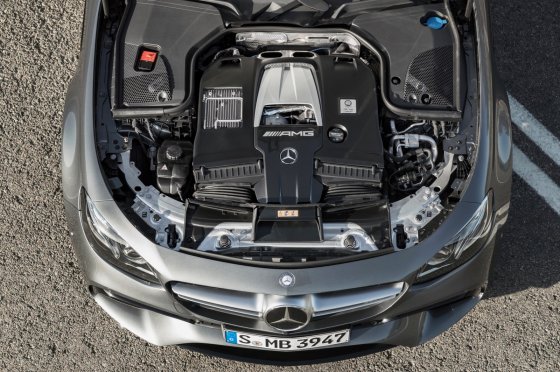 OK seriously, there is no safe place to access all that horsepower on public roads. The accumulation of speed comes on so quickly your eyeballs have trouble keeping up. Those twin turbos spool up early, and hard. Remember, there’s 627 lb-ft of torque under your right foot.

The ride was both louder and harsher than we might have expected from a Mercedes product — but we didn’t care. You don’t buy the Mercedes-AMG E63 S so you can brag about having the smoothest-riding car in the office parking lot. You buy it because it performs like few other cars on the planet. 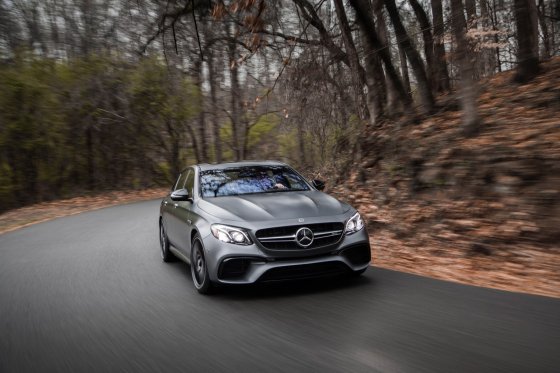 The Air Body Control AMG Sport Suspension was adept at making sure every corner was flat as a pancake, but not necessarily awesome at dulling potholes or expansion joints. And unless we cranked up the aforementioned Burmester sound system to rock some tunes, we were greeted by quite a bit of road noise. Then again, we also were greeted by the awesome soundtrack of that 4.0-liter twin-turbo V8.

Mat the gas, and the AMG E63 S goes from zero to 60 mph in 3.3 seconds. That kind of quickness needs to be experienced to be understood. We’re talking about over 1 G of force pushing you back into your seat. If we moved the passenger seat all the way back, taped a $100 bill to the passenger side of the dash, and told you it was yours if you could reach it during a zero-to-60 run, we would not be leaving the conversation $100 poorer.

AMG had the forethought to give this monster Mercedes’ excellent 4MATIC all-wheel drive system, tuned for maximum on-road grip. We’re not saying it would be impossible to flick the tail of the big E63 S out, but we know we never managed to do it, even in some very spirited testing, let’s call it, on a deserted airport tarmac after our photo shoot. 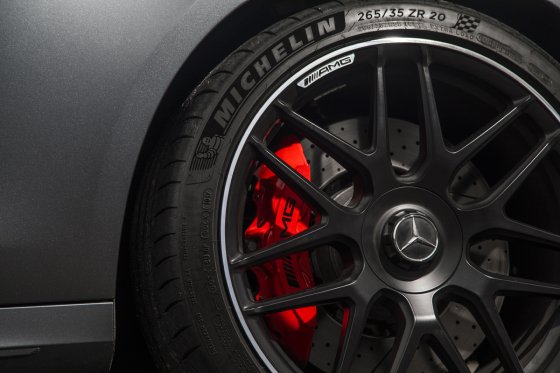 We were thankful for the enormous vented disc brakes front and rear, excellent traction control, and a raft of driver assistance technologies that kept us out of trouble. Two examples:

A final note, and probably something a lot of AMG buyers don’t care about all that much: Fuel economy topped out at around 20 mpg on the highway, and averaged 17-18 mpg in mixed driving. It takes premium fuel. We took the car on a road trip and spent over $40 on premium unleaded. 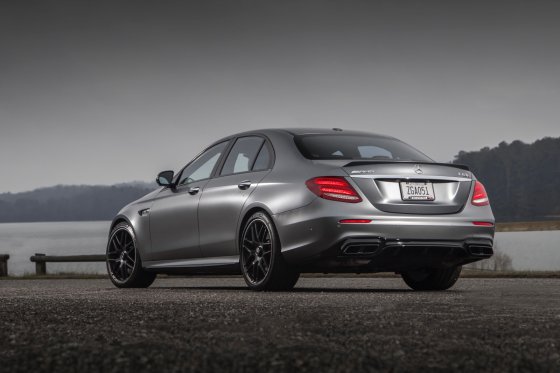 There are few cars that will leave an impression on your psyche the way the Mercedes-AMG E63 S will. With a design that flies a bit under the radar, the car is a classic German brutal muscle sedan. It doesn’t announce itself too loudly, but it’ll hang with supercars that make a lot more visual noise. For some of us, this “sleeper” profile is desirable.

There are other midsize sedans in this price range. The BMW M5 is a just over six figures, for example. An Audi RS7 is, too. Both fall short of the performance offered by the Benz. For those looking to buy the baddest gasoline-burning four-door luxury sedan in the land, the Mercedes-AMG E63 S is the segment’s apex predator.