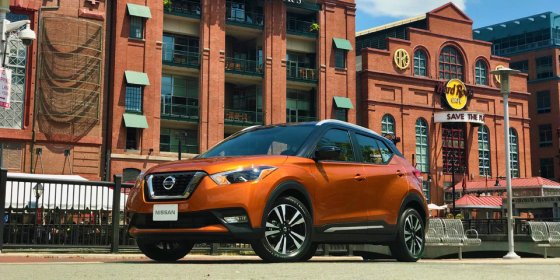 The 2018 Nissan Kicks is the all-new subcompact crossover that replaces the Juke in the Nissan lineup. While it still offers expressive styling and fun colors, the Kicks doesn’t go as far as the Juke did, which may help it to appeal to a broader audience. We were recently invited for a first drive experience with the newest model to the Nissan lineup at an event in Baltimore, where we shot these photos.

We’re big fans of any vehicle offered in orange, but the Kicks also appeals to us with its dynamic lines and floating roof design. It borrows some signature Nissan styling from the other crossovers in the lineup, but still maintains enough character all its own, and we think it’ll appeal the younger drivers that it targets. With pricing starting at $17,990 and great fuel economy (33 MPG), the Kicks offers great value for the money.

The 2018 Nissan Kicks will be offered in three well-equipped front-wheel-drive models – Kicks S, Kicks SV and Kicks SR. Each is equipped with a standard 1.6-liter DOHC 16-valve 4-cylinder with Continuous Variable Valve Timing Control System (CVTCS). The engine is rated at 125 horsepower and 115 lb-ft of torque. Aided by a smooth Xtronic transmission, the Kicks fuel economy3 is rated at 33 mpg combined.

We’d love to see the Kicks offered with All-Wheel-Drive (AWD), but for that you’ll need to step up to the Rogue Sport. Our time with the Kicks was limited, but overall we were left impressed. It is certainly competitive in the sub-compact market. Based on that brief experience though, we’d recommend not opting to upgrade to the Bose Personal Plus sound system.