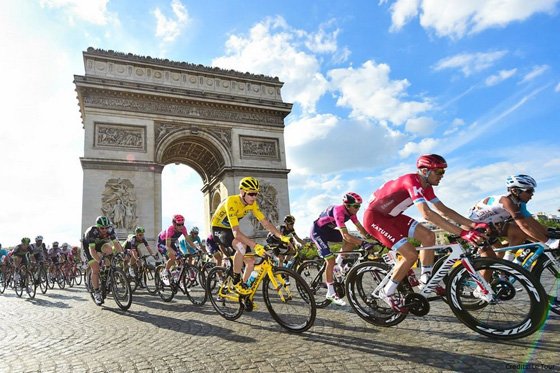 The 105th edition of the Tour de France begins this Saturday, July 7th. The 21-stage race departs from a french town you’ve never heard of, and will finish with the traditional Champs-Élysées stage in Paris, on July 29th. This year’s Tour will be the shortest of the century, and was delayed a week by organizers to avoid competition with the World Cup. Here’s a little taste of what you can expect from the most epic sporting event in the world :

We understand Cycling isn’t very popular in the United States, but the Tour de France is indeed the largest live sporting event in the world, with 12-15 million spectators along the roads of France over the 2,069 mile race. July is generally a slow month for Sports, so we’re here to encourage you to try something different this year. For several years now, we’ve prepared a full Tour de France Primer for Americans, which is a good place to start if you are new to the sport. This year, however, we’re going to focus on just previewing the 2018 edition of the race.

Rather than give you a full written preview, we’re going to curate some great videos that have been prepared by other sources.

We’ll start with this short three-minute preview from NBC Sports :

Chris Froome has won the Tour de France for the past three years, and four times overall. That string of victories qualifies him as one of the best Tour Champions of all-time. However it also makes him a target for doping allegations as described in the video above. The situation has been the source of some recent drama in the news, but Froome was recently cleared and he is set to race starting on Saturday. Check out this video from NBC to see who are the top contenders to knock him off this year :

Our favorites are the sprinters though, and Peter Sagan is always among the most exciting riders in the peloton. Checking out this video for a preview of the Sprinters to watch :

As for which stages you should watch, that’s really up to you, as we’re going to watch all of them. If you prefer a heart pounding sprint finish, then you’ll want to focus on the flat stages. If you’d rather watch an epic battle up the slopes of mountains, then the stages in the Alps and Pyrenees are more your speed. The video below has five stages to watch, including our favorite, Alpe d’Huez :

We’ll leave you with this “Best of 2017” video from Tour de France organizers.