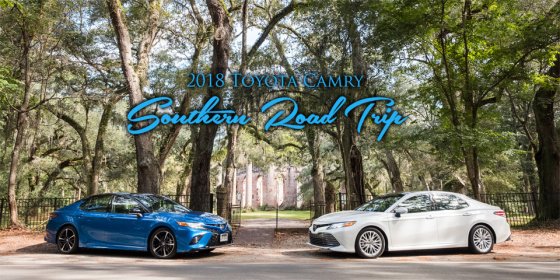 The Toyota Camry has been the best-selling car in the United States for 15 years running. That presents a challenge to Toyota whenever they update their flagship vehicle. Should they mess with success, or risk losing potential new buyers by being too conservative? As you can see from the two models featured above, Toyota tackled that dilemma head-on with the all-new 2018 Toyota Camry. Chief Engineer Masato Katsumata’s explains, “We wanted to make an impact with current owners, to shake things up and leave a lasting impression with current and new owners.”

The Camry SE and XSE (left) are all about unleashing Toyota’s inner playfulness, while the Camry L, LE, and XLE (right) carry the air of a dapper gentleman or proper lady. We were recently invited to experience both sides of the new Camry on a Southern Road Trip. Rather than structure our thoughts like a typical review, we’d like to invite you on a bit of a travel journal, arranged chronologically as we drove south from Charleston, SC to St. Augustine, FL. Along the way you’ll learn more about the new Camry, and our thoughts from our time behind the wheel. 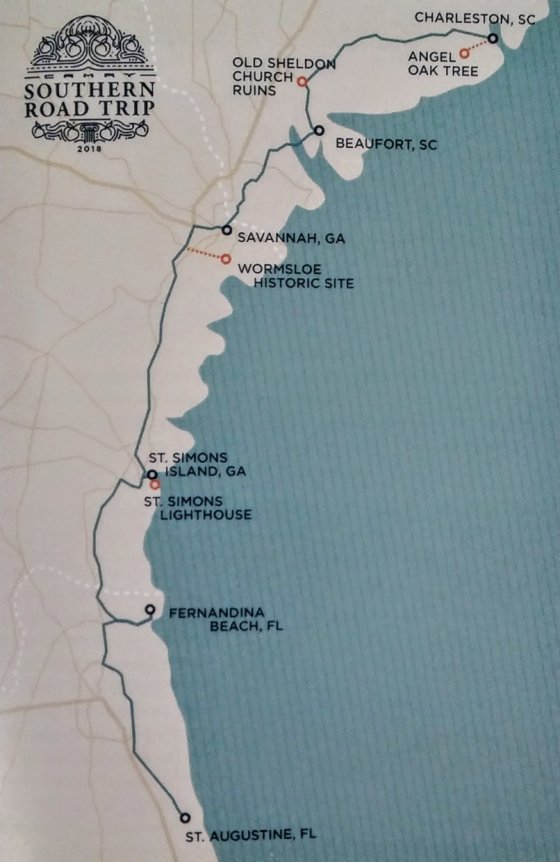 Rainbow Row, on East Bay Street, is the name for a series of thirteen colorful historic houses, the longest cluster of Georgian row houses in the United States. 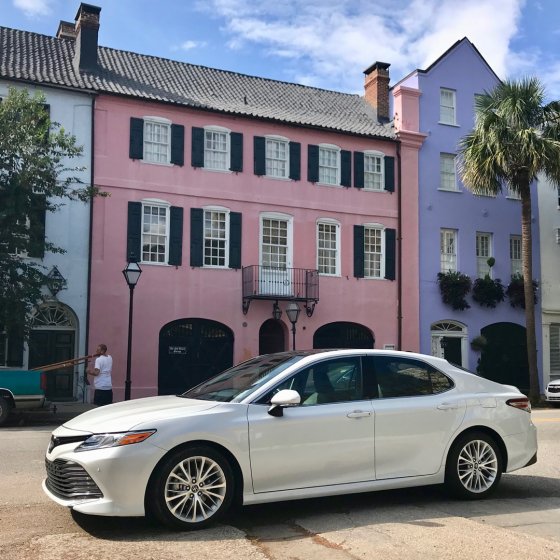 Coincidentally, the 2018 Toyota Camry is offered in thirteen different color combinations, including three with an awesome contrasting midnight black metallic roof available on the XSE trim.

Set in an elegant 1892 mansion, Two Meeting Street Inn is now an upscale Bed & Breakfast that is favorite stop of horse-drawn carriage tours of the city. 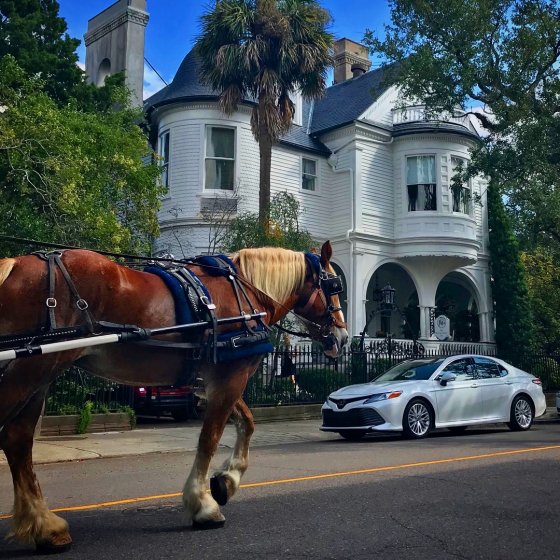 Built for the War of 1812, Fort Sumter is the island fort in Charleston Harbor that is most famous for being the target of a Confederate attack that began the Civil War in 1861. 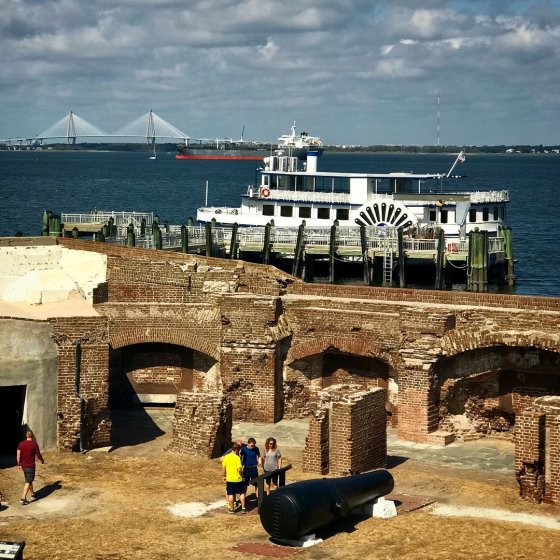 While South Carolina was clearly a Confederate state, Kentucky never officially declared secession from the Union. Which means the Toyota Camry that is built in Georgetown, KY is indeed proudly Made in the USA.

The Old Exchange and Provost Dungeon dates back to 1767 and has served a variety of civic institutional functions over the years, including custom house, public market, meeting place, military barracks, and prison. 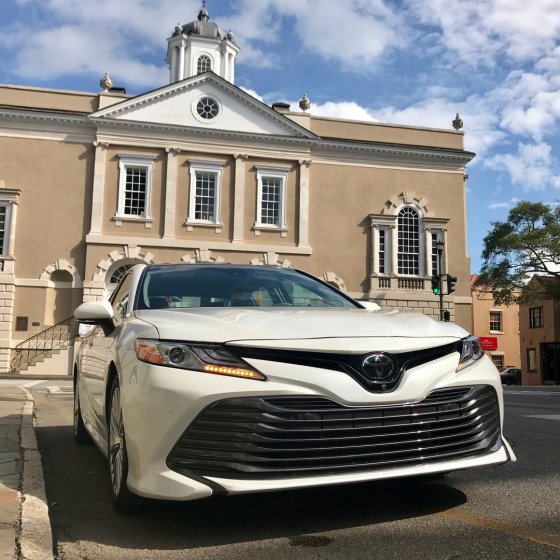 The Toyota Camry also has a long storied history, and has undergone numerous changes over the years. The Camry name has been used since 1979, and the 2018 version is the eighth generation of the global Camry model.

Established in the 1790s, The City Market stretches four city blocks and once provided a place for local farms and plantations to sell their product, but now is mostly full of vendors selling souvenirs, jewelry, and Gullah sweetgrass baskets. 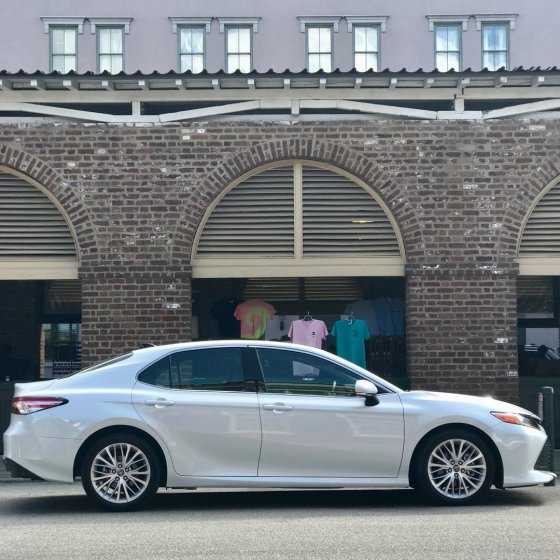 While not sold at The City Market, the 2018 Toyota Camry is available now at local dealerships in a variety of configurations with prices ranging from $24,000 to $35,000.

Our first night on the Toyota Camry Southern Road Trip was spent at the Wentworth Mansion, which was built in 1886 to house a wealthy cotton merchant. It is now a charming 21-room inn with southern hospitality and luxurious amenities. 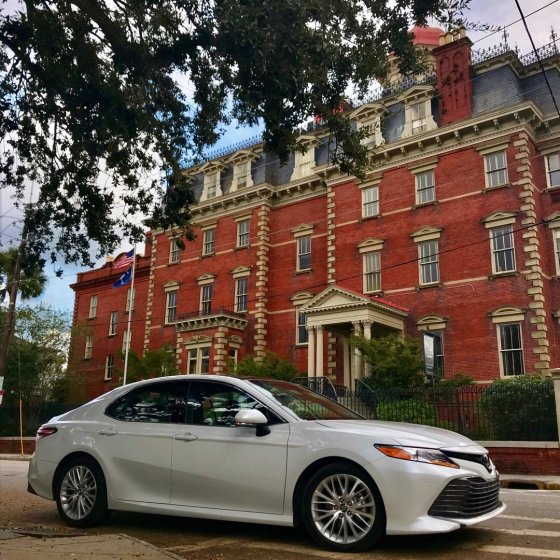 The Old Sheldon Church, located in Beaufort County, was burned by the British in 1779 during the Revolutionary War, rebuilt in 1825, and then burned again in 1865 during the Civil War. 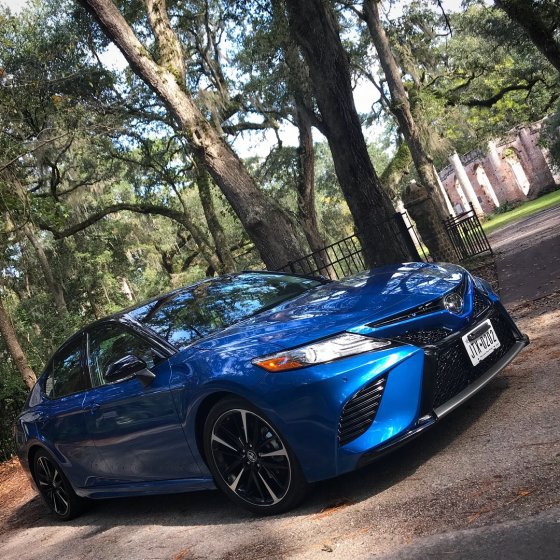 We reached the Old Sheldon Church Ruins with directions from the Camry’s Dynamic Navigation that comes with the Entune 3.0 Premium Audio System. Our tester pictured above featured an 8″ screen and 10″ color head-up display.

Tybee, the easternmost point in Georgia, is a barrier island and small city near Savannah that is known for its wide sandy beaches. 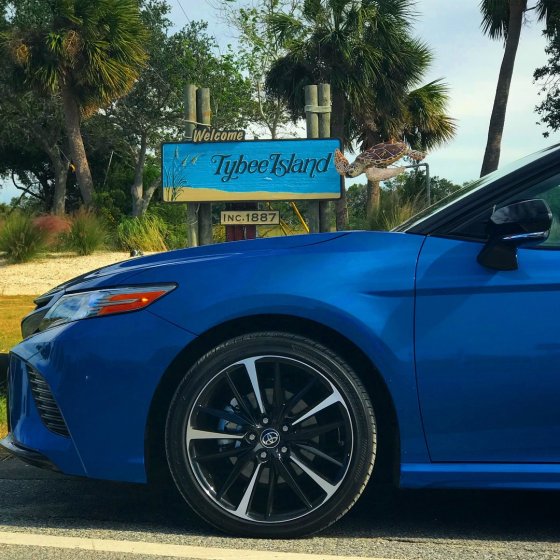 The sporty styling on the XSE trim really turned heads on our road trip. We’re especially fond of the extensive use of black to accent the front grille, roof, spoiler, side mirrors, and 19″ alloy wheels.

The Tybee Island Light is one of seven surviving colonial era lighthouse towers that was first constructed in 1736 but highly modified in the mid 1800s. The octagonal tower is 144 feet tall and contains a first order fresnel lens. 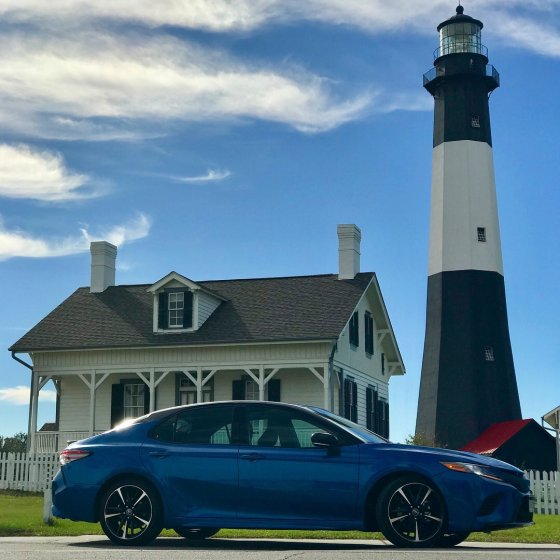 The Tybee Light once helped vessels to navigate and avoid hazards, much like the Bird’s Eye View Monitor which is available in the Toyota Camry. It uses four high-resolution cameras mounted on the front, sides, and rear of the vehicle to help give the driver a bird’s-eye view of the near-vehicle environment, assisting the driver when parking or making tight maneuvers.

The Mansion at Forsyth Park is a restored 1888 Victorian Georgian mansion that has been converted into a 126 guest room luxury hotel and reopened in 2005 by Savannahian and avid art collector Richard Kessler. 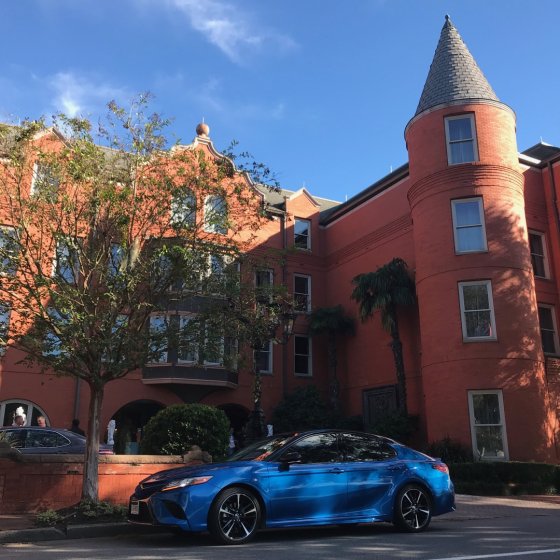 The Mansion was our home in Savannah, and marked the end of our day behind the wheel of the Toyota Camry XSE with V6 engine. It was definitely the best Camry we’ve ever driven, and this exact configuration and color combination is by far our favorite.

Savannah’s Historic cobblestone River Street is home to more than 70 businesses, shops, and restaurants. It’s a popular destination for both tourists and locals. 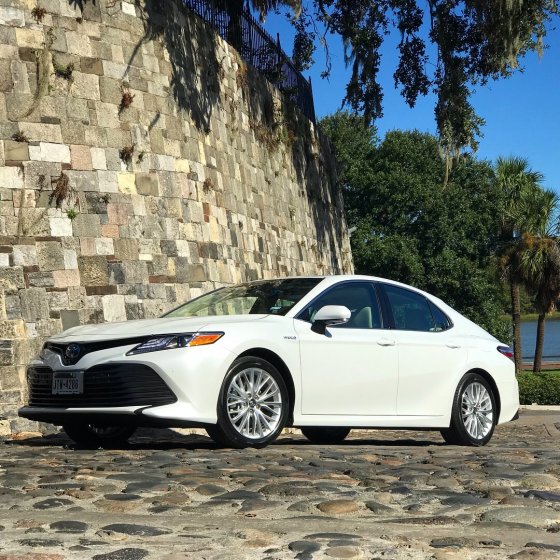 On our third day behind the wheel, we drove the Hybrid version of the Toyota Camry, which features a new Sport mode that enhances acceleration. The Hybrid combines a 2.5-Liter 4-Cylinder engine with an electric motor for a combined 206 horsepower. It’s rated at 44 mpg city, 47 mpg highway, and 46 mpg combined.

Bonaventure Cemetery was prominently featured in Midnight in the Garden of Good and Evil and is the final resting place of songwriter Johnny Mercer. It’s a 160 acre public cemetery located on a scenic bluff of the Wilmington River. 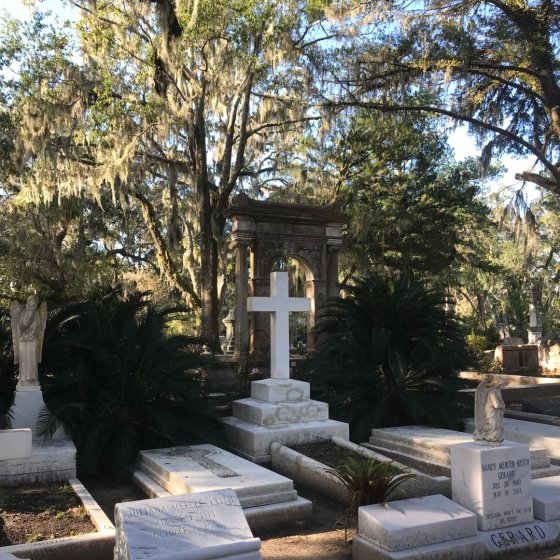 Sorry, no photos or observations about the Camry in the Cemetery, because that seemed a bit creepy.

There are 24 squares in Savannah, and Chippewa is one of the most well-known due to its location in the center of the historic district, and its statue of Savannah’s founder, James Oglethorpe. It was also the location used for filming the famous bus bench scenes in Forrest Gump. 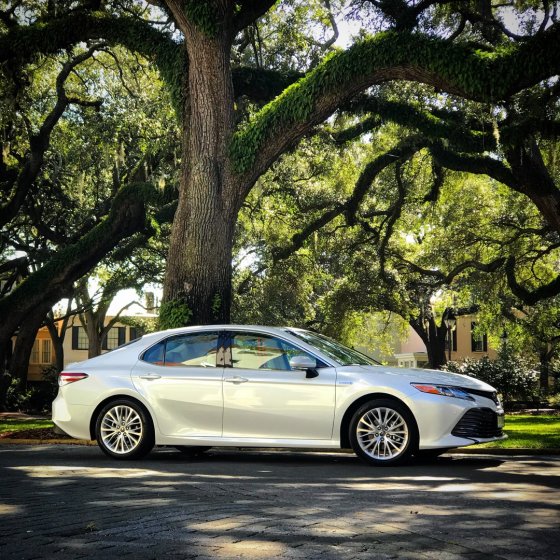 The Forrest Gump Soundtrack is one of our favorites, and it’s never sounded better thanks to the Camry’s Entune 3.0 Premium Audio with JBL with Clari-Fi package.

Clari-Fi software scans compressed media-such as MP3s, YouTube, streaming media, and identifies data missing due to the format compression. The software then analyzes the data and restores the missing elements to produce crisper, wider and more dynamic sounds that are faithful to the original recording.

The St. Simons Island Light is a 104-foot tall brick tower completed in 1872 with a third-order biconvex Fresnel lens. 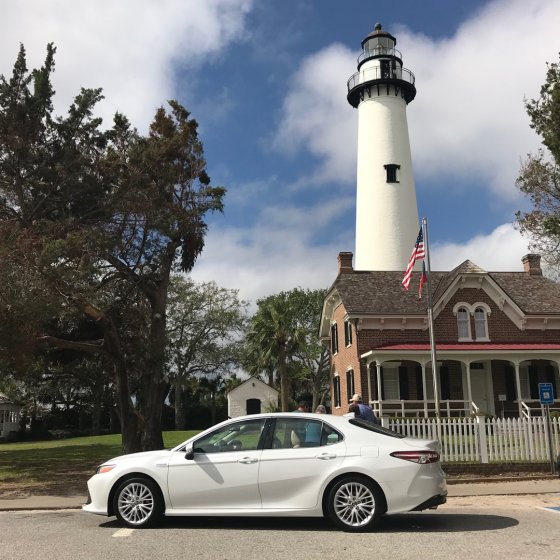 The Casa Monica is a Moroccan-themed hotel that was opened in 1888 by Franklin Smith, a notable Victorian architecture enthusiast and social reformer. The luxurious Casa Monica Resort is now part of the Kessler Collection. 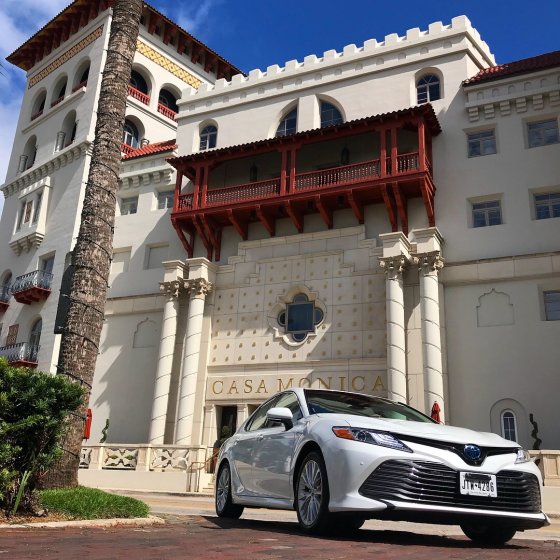 During another great day on the road, we used the standard Scout® GPS Link App to help us navigate to check-in at Casa Monica in St. Augustine. Once connected, it worked pretty well, but we’d prefer that Toyota offer Apple Carplay and Android Auto. We do appreciate that they offer a free navigation solution for all Camry customers, but think they’re falling behind their competitors with this solution.

The Ponce de Leon Hotel was an exclusive luxury resort built by Henry Flagler in 1888, and now serves as the home of Flagler College. 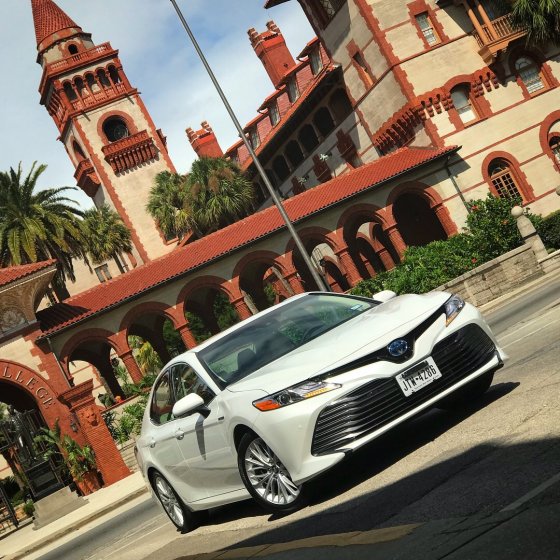 Striking design isn’t something that the Toyota Camry has been known for over the last two decades, but like the Ponce de Leon Hotel, the new model makes a concerted effort to stand out from the crowd. The styling variations on the various trims also help to ensure that there is a Camry that fits a wide variety of buyers.

The Castillo de San Marcos is the oldest masonry fort in the continental United States. Construction began in 1672 on the western shore of the Matanzas Bay and after 251 years of continuous military possession, it was finally deactivated in 1933. 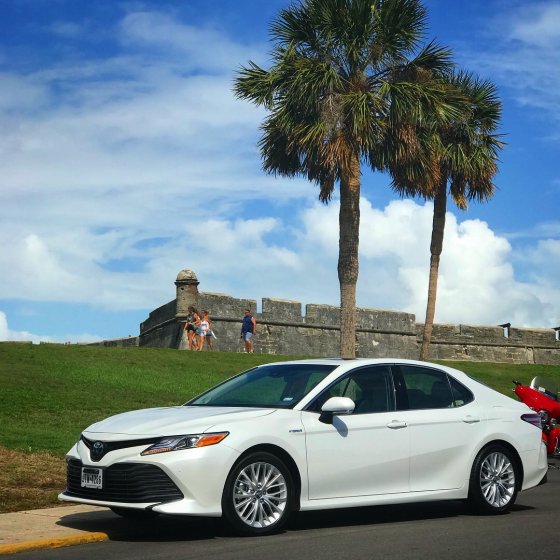 The Toyota Camry is known for its longevity and reliability, and while it likely won’t last you 251 years, it does have a 5-year / 60,000 mile Powertrain Warranty.

The Old City Gates are a surviving part of the walls that once surrounded the nation’s oldest city. They were built of coquina by the Spanish in 1808. 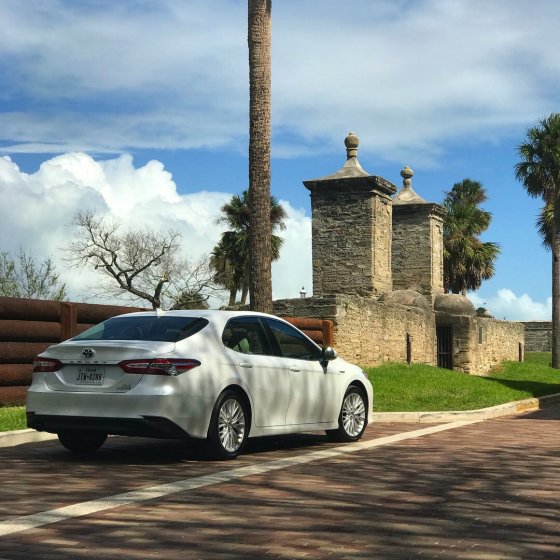 While the Toyota Camry is all-new for 2018, it still has plenty of characteristics to remind buyers of what came before it. Toyota is definitely trying to attract younger buyers with the sport trims, but the new Camry should still appeal to their traditional buyers as well.

The third and final lighthouse on our road trip was built in 1874, which makes it the most recently constructed tower in the area. It is 165 feet high and houses a first order Fresnel lens. 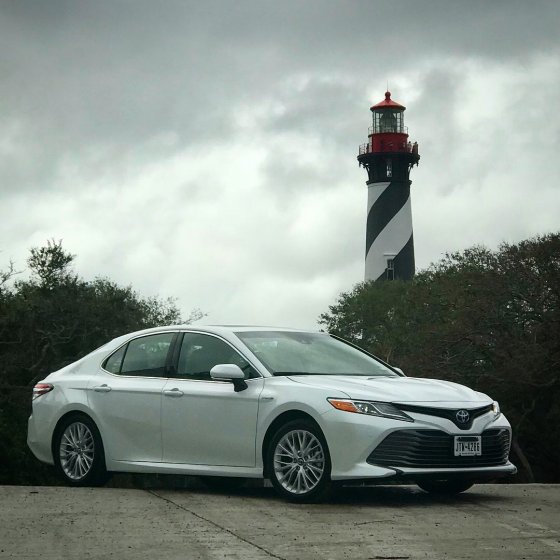 Lighting technology has come a long way since the days of Fresnel lenses. The 2018 Toyota Camry makes extensive use of LED technology, with a variety of lighting treatments available (depending on trim) for the head lights, tail lights and daytime running lights.

Like any good road trip, the Toyota Camry Southern Road Trip was more about the journey than the destination. While we were clearly focused on the car and the places we visited, it was the people who joined us for the journey which truly made the experience special. So to honor that, we’d like to share some of their features below : 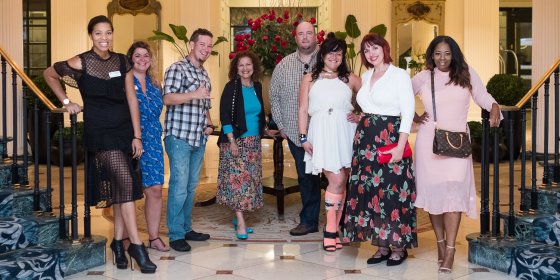