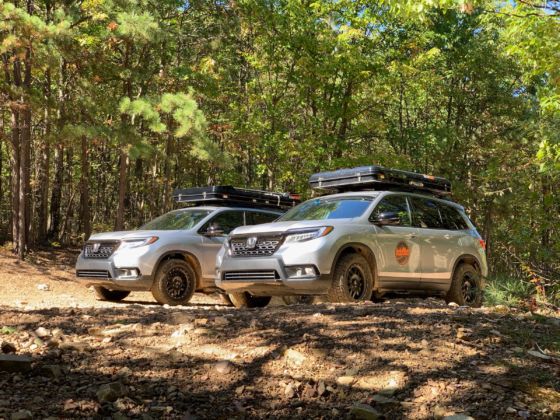 The 2019 Honda Passport is the adventure focused new addition to Honda’s crossover lineup, slotting in between the compact CR-V and the larger, family-focused three-row Pilot.

“The all-new 2019 Honda Passport provides the on-road comfort and nimble handling buyers will appreciate on their daily commute with the robust off-road and all-weather capability that make for a great weekend adventure vehicle,” said Henio Arcangeli, Jr., SVP of American Honda Motor Co.

That off-road claim was one we were more than happy to put to the test with the Trail Trek Tour on their recent trip to Overland Expo East. Except we weren’t driving a standard Passport off the lot, Honda sent us an AWD Elite model, up-fitted with new wheels, All-Terrain tires, skid plate and step rails. Those added goodies were built by Jsport Performance Accessories, which exclusively provides add-ons for Honda vehicles. They also tossed some sweet RoofNest tents on top, so we’d have some where to sleep at Overland Expo. 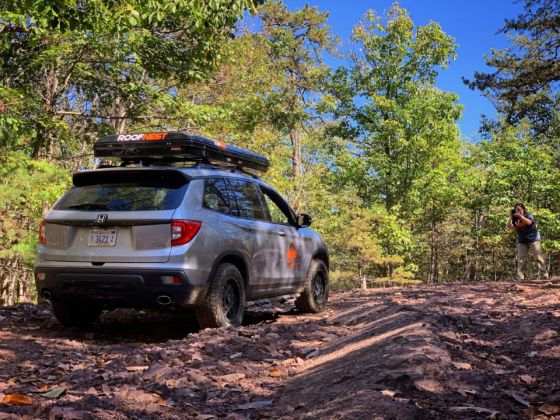 Our test trail for this modified Passport was one that we’ve driven many times before, and is essentially a fire road through George Washington National Forest in the Shenandoah region of Virginia. While Taskers Gap is definitely crossover friendly, traction and ground clearance are key to navigating it easily without damaging your vehicle. It’s similar to many trails that you’ll find across the country, that adventure seekers use to get to their campsites, kayak drops, and hiking trailheads. That made it the perfect test for the Passport’s i-VTM4 torque-vectoring all-wheel drive system, in real-world conditions that we would expect their customers to encounter. 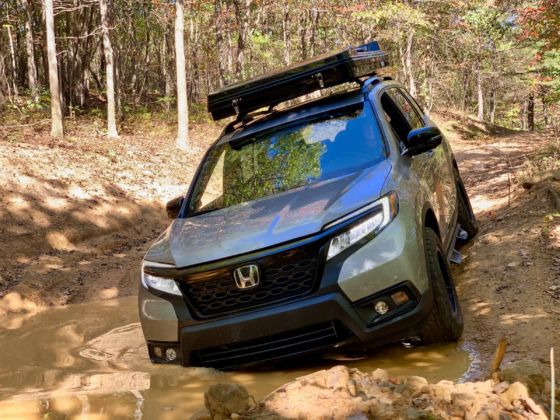 Traction was not a concern at all for this Passport. We made it through a variety of surfaces without a single issue from the AWD system and All-Terrain tires. Honda’s i-VTM4 all-wheel drive system uses active torque vectoring to send up to 70 percent of engine torque to the rear axle and 100 percent of that torque to either the left or right rear wheels. Additionally, the four-mode Intelligent Traction Management (ITM) systems works in conjunction with i-VTM4, allowing drivers to customize powertrain performance for different weather and terrain, including sand, snow and mud. 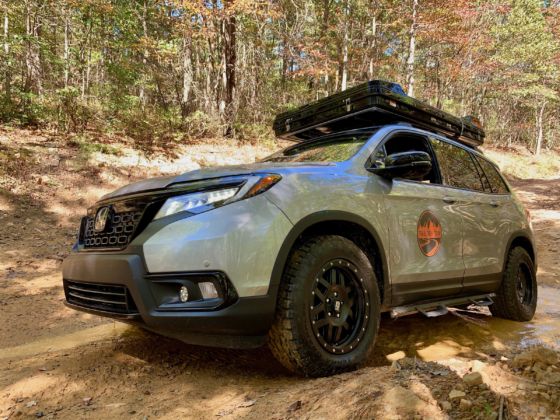 Ground clearance on the other hand became an immediate concern when we realized those fancy step rails were mostly for show. Our Passport wasn’t lifted, and even if it was, you still wouldn’t need step rails to get into this vehicle. Which means they’re only useful for accessing the roof-rack, but we found the steps themselves to be too small to step on to actually be useful in that case either. So they really only served an aesthetic purpose, but in addition to setting you back $895, they’ll also cost you in lost ground clearance. We didn’t measure, but the Passport is listed with 8.4″ of clearance in the AWD variety, and we wouldn’t be surprised if the steps rails (and brackets) hang down 3 inches below the otherwise lowest point. 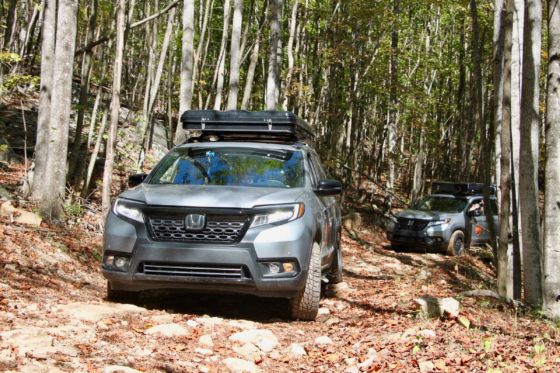 Despite the ground clearance concerns, we navigated the wide trail with ease, dodging any larger rocks that gave us reason to worry. While we took it slow at the beginning, stopping to spot where needed while capturing photos and video, on the way back out of the trail we picked up the pace. The Passport handled both driving styles like a champ and we emerged at the end of the trail ride with two undamaged Hondas and four happy drivers. From there we hit the twisty mountain roads for a spirited country drive thanks to the 280hp 3.5 liter VTEC V6 engine, 9-Speed Automatic Transmission, and independent suspension.

See how the Honda Passport handled the trail, and some scenes from our experience at Overland Expo East in the video from Trail Trek Tour below: