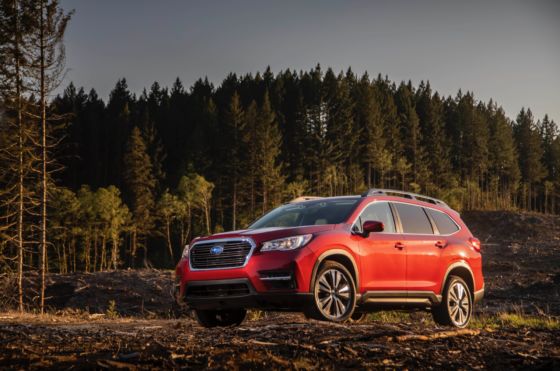 The new 2019 Ascent has Subaru climbing to new heights in the third-row segment with a family-friendly, but still very Subaru crossover. Unlike the Tribeca that the automaker fielded a few years ago, the Ascent is a usable, fuel-efficient, family-sized offering.

Subaru has said that its buyer base has been growing out of its vehicles as priorities change and families enlarge. Where the Outback or Forester might have been enough for some owners, those models have no third row option for expanding seating options or the larger cargo space that comes with a three-row SUV. This meant buyers had to leave the brand to find those things. So the Ascent was introduced, hoping to recapture those Subaru buyers.

The 2019 Subaru Ascent certainly does fit that bill, hosting most of the expected Subaru persona of all-weather readiness, “get out there” appeal, and a focus on dependability and excellent function that makes form. The Ascent seats up to eight, tows up to 5,000 pounds, and gets 23 mpg combined too. 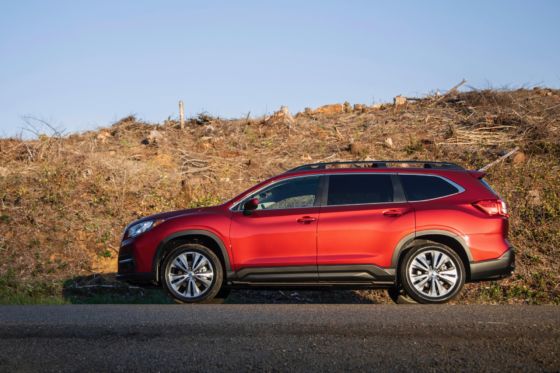 Subaru is not known for pushing design envelopes, instead aiming for generally mainstream appeal without losing the brand’s identity. The 2019 Ascent is, basically, a beefed-up Outback with a little Forester thrown in. It has roughly the same build and ground clearance as the Outback and Forester and similar dimensional balances as well. Compared to most on the market, the Ascent looks contemporary, but still holds itself apart without blending in too much.

This is a good thing for the Subaru Ascent, which must compete with some pretty well-done rivals. The three-row market is hot right now and the 2019 Ascent is a good contender amongst a crowd of excellence. The Ascent is set apart from most thanks to its Outback-Forester backbone, carrying the classy notes of the former and the credibility of purpose of the latter.

Subaru has done a good job of keeping its heritage intact while mixing in family friendliness for the Ascent. 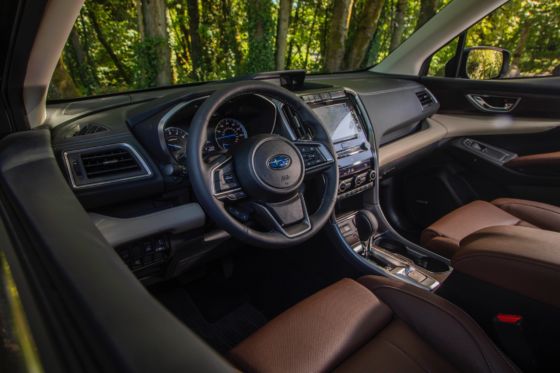 The interior of the 2019 Subaru Ascent is fairly austere when compared to most in the segment. Quality materials and comfortable ergonomics are the course of the day, where others may instead have focused on upscale appeal. This is fitting with the Subaru mindset, though, and the basic requirements for excellence are all in place.

The front row is well done with good quality seating that’s adjustable enough for just about anyone to find a sweet spot. Headroom, legroom, and shoulder room are very good–even for those of us over six feet. Seat bolstering and comfort are almost perfect.

Controls for the driver are well-placed and thoughtful, making them intuitive. The focus on functionality is definitely seen with the driver’s cockpit design, which is aimed towards ensuring prime visibility and access. The center console is similar, being a bit button-happy, but is easier to use for that. The lack of reliance on the touchscreen for things is refreshing in today’s “delete and make virtual” world.

The second row of the Ascent has very good seating as well, with good outboard positions on the bench and a usable center spot. Swapping that bench for captain’s chairs is recommended, though, for maximum comfort. The third row is mostly for children, but adults can fit there when required. There are 33 inches of legroom and good headroom too, so the only downer is the seat height, which means a high knee bend. For short trips, adults won’t find this to be a deal breaker and for any length of drive, kids will love the third row.

Infotainment in the 2019 Ascent is pretty good. The crossover comes standard with a 6.5-inch color display that can be upgraded to an 8-inch unit with voice controls. Apple CarPlay and Android Auto are standard in the upgrade, as are the aforementioned voice controls and things like satellite radio and the like. Subaru connected apps are available, as is navigation. Those familiar with Subaru’s infotainment systems will recognize the setup immediately. The voice controls are particularly well done, but we’d otherwise recommend plugging in the phone and using Auto or CarPlay for most things. 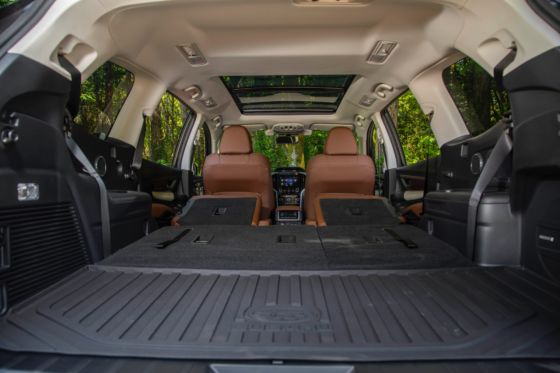 The integrated roof rack is a great addition for the 2019 Ascent too. With towing capability on top of that, the Ascent clearly has a lot of cargo hauling options. 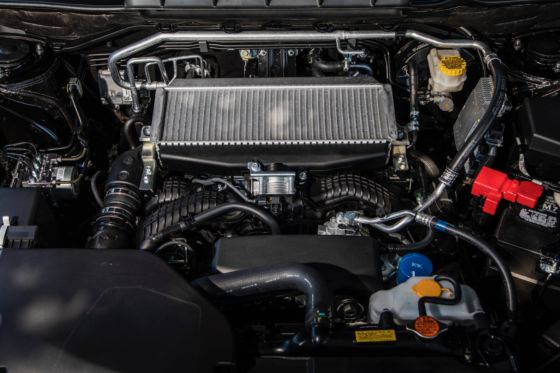 A familiar-seeming 2.4-liter four-cylinder opposed piston (boxer) engine powers the 2019 Subaru Ascent with 260 horsepower. This runs to a continuously variable transmission (gearless CVT) and a differential for full-time all-wheel drive. As standard. The secret to the little 2.4L not being overwhelmed by the Ascent’s size is its turbocharging, something unusual for Subaru outside of its performance cars.

The turbo on the Ascent’s engine delivers power a bit sooner and more readily than might be expected of a vehicle this size. That translates into better performance overall, with good power delivery across the band and a decent amount of umph for the Ascent’s get-up. There is some lag in the turbo’s delivery, but it’s not terribly disappointing as this isn’t a performance vehicle in any other way. Instead, the Ascent gets up to speed readily and speeds up for the pass reliably. Exactly what a family-toter needs. 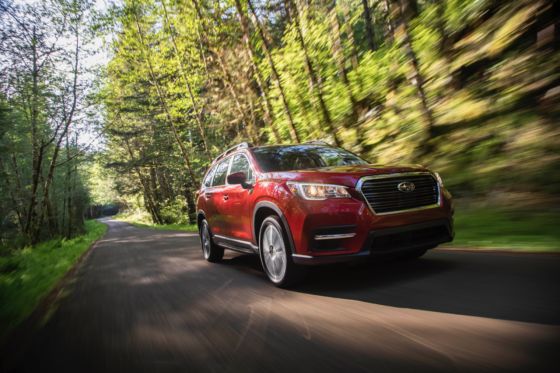 Handling in the 2019 Ascent is akin to that of the Forester, which is more maneuverable than its size would merit. There isn’t much in the way of sportiness or precision in the Ascent’s turn, but the combination of the vehicle’s power delivery and AWD setup make it very stable in most situations. The well-deserved reputation of Subaru’s excellent AWD system is also at play in the Ascent. 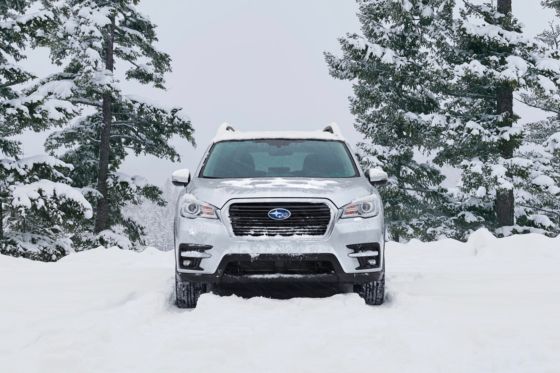 Fuel economy is good for a three-row AWD crossover. The 2019 Subaru Ascent is EPA-rated at 21 mpg in the city and 27 mpg on the highway. In the real world, we managed to get 25 mpg overall, which is about two points over the expected combined MPG. 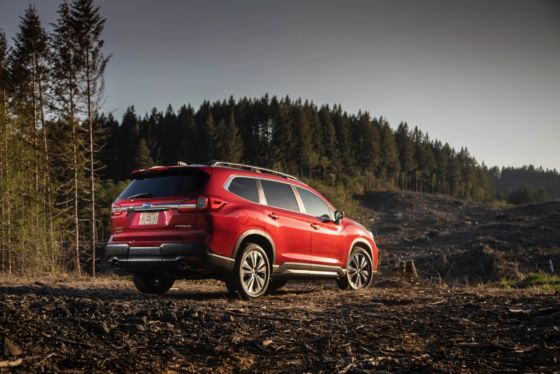 The 2019 Subaru Ascent is a solid entry into the three-row family market with a lot of appeal to Subaru buyers in particular. Its base price of $31,995 is good for an AWD three-row, though we’d recommend shopping upwards and think that the Premium and Limited trims are probably a better fit for most who’re considering this Subaru.

The 2019 Ascent is an excellent choice in the midsize three-row segment with plenty of Subaru styling and appeal alongside its well-done interior ergonomics. Dependable AWD, high fuel economy returns, and plenty of capability are definite high points for the Subaru Ascent. It’s a signature Subaru offering for sure.