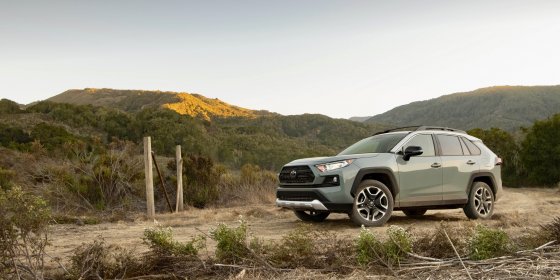 Take a look around you on the roads in the United States and you can’t help but notice a Toyota RAV4, or three. They are absolutely everywhere, and the numbers back up what you’ve probably noticed anecdotally. The original RAV4 was introduced to this country 22 years ago, and America has fallen in love with the compact crossover. Sales volume for the RAV4 has doubled over the last five years, to nearly 408,000 in the United States alone in 2017. That ranks the RAV4 as Toyota’s best-selling vehicle and the best-selling non-pickup truck in the country. So the roll-out of the all-new 5th generation 2019 Toyota RAV4 is a big deal, and there are literally hundreds of thousands of people looking forward to driving this vehicle when it arrives in dealerships next month.

Count us among the folks excited to drive the new RAV4, especially when we heard there was an Adventure grade and that we’d actually get a chance to drive it off-road. We were recently invited to Carmel Valley Ranch to experience Toyota’s new compact crossover for ourselves, and after two full days of driving, we’re ready so share our observations with you. Join us first for this brief video look of the new model, including extensive interior footage, filmed over a day driving the 2019 Toyota RAV4 Adventure in Big Sur, California. 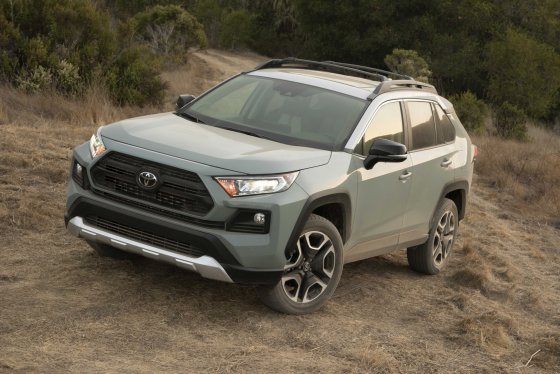 Our immediate reaction to seeing the new 2019 Toyota RAV4 Adventure was echoed by several people who we met on our two days behind the wheel in California.

“Looks much more like a Tacoma or 4Runner, very nice.”

“That’s the best looking RAV4 ever!”

To be honest, the Toyota RAV4 has a well-earned reputation as a Grocery Getter. Soccer moms love it to take their kids to practice and pickup dinner at Whole Foods. While there is nothing wrong with that, as men who like to play outdoors, we’re excited to see Toyota make an effort at adding a bit more utility and sport back to a vehicle that was once called a Sport Utility before embracing the Crossover moniker.

Designers did indeed draw inspiration from Toyota’s trucks (especially in the front-end and grille design) when pursuing the Adventure theme. While the look isn’t unique to the Adventure grade, we did find it most successful in this trim, which made it our clear favorite. Words in the press release include tough, chiseled, dynamic, robust, brawnier, and attitude. There is no mistaking what the goal was here, to create a RAV4 that will help skew buyers younger and more male, helping to balance their existing base of RAV4 customers. We think this design will go a long way towards that goal.

The Adventure grade receives high-rise roof rails, larger over-fenders, more aggressive bumper, grille design and fog light surrounds. It also gets matte-black accented 19-inch, split five-spoke wheels and 235/55R19 tires. While the new wheels look great, we would have preferred they be smaller for better performance off-road. However, ground clearance is improved substantially to 8.6″ compared to 6.5″ on the previous Adventure grade. Yes, we double checked those numbers, and they are accurate.

The Ice Edge (white) roof can be combined with three different body colors, Midnight Black Metallic, Blue Flame, and Lunar Rock (pictured here). The floating roof is fairly cliche these days, but it works well on this model, and we’re quite fond of the white. We only wish they had been more adventurous with the body colors and are holding out hope that a special edition orange version (to match the interior below) may one day be offered. 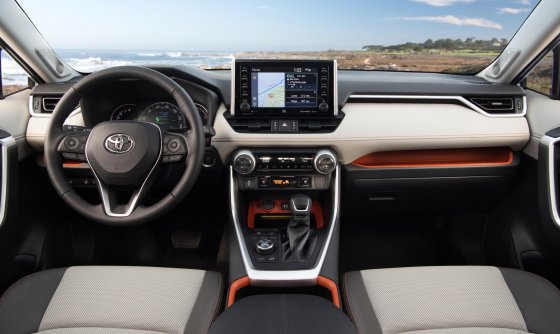 We found lots to love inside the 2019 Toyota RAV Adventure, starting with the two-tone interior with orange accents. We have a documented affinity for orange, but think it looks even better when combined with shades of grey and this interior color combination is among the best we’ve ever seen. We’re not just fond of the colors utilized however, we also appreciate the soft-touch materials and those beefy rubberized knobs. That brilliant in-dash shelf is a feature we loved in the Highlander, and we’re so happy to see it here in the RAV4. The fact that it’s orange and rubberized just added to our delight.

The new RAV4 Adventure is loaded with tech too, with Qi wireless charging, Entune 3.0, Toyota Safety Sense 2.0, and a 12V/120W AC power outlet in the expanded rear storage area. Apple CarPlay (with Waze) is finally available, and it looks great on the optional 8″ screen. We also enjoyed the 800-watt JBL sound system with Clari-Fi. The Adventure grade can also receive optional heated & ventilated seats and a moon roof. 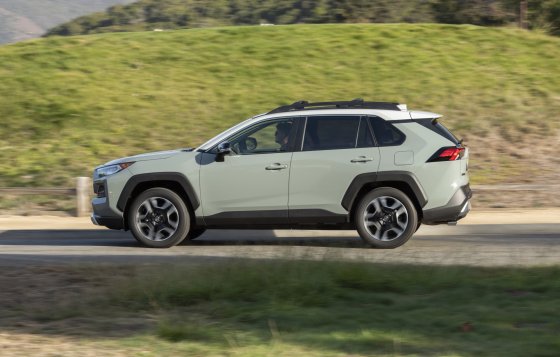 The 2019 Toyota RAV4 Adventure comes with the new Dynamic Force 2.5L inline-four-cylinder engine paired with an 8-speed Direct-Shift Automatic Transmission. It’s pretty good, definitely better than the outgoing vehicle, and we would have been quite happy with it, if we had never driven the hybrid. Not only does the Hybrid improve on fuel economy (39 mpg combined over 27 mpg combined for Adventure) it also improves upon performance as well with notable low-end torque. Horsepower is rated at 203 for the gasoline Adventure, but 219 for the Hybrid. The noticeable difference in the drivetrains led more than one media member at our drive event to ask Toyota about a Hybrid version of the Adventure, which unfortunately won’t be offered in 2019. 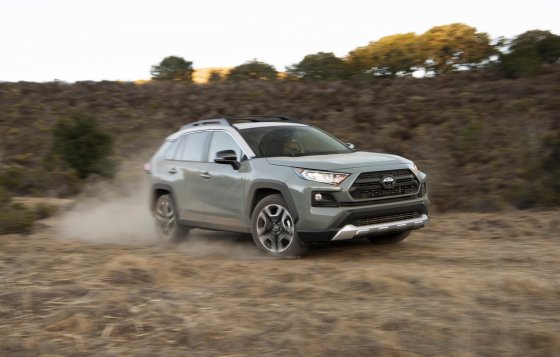 The Adventure grade only comes in the All-Wheel Drive version, which is exactly how it should be in our humble opinion. The AWD system is a Toyota and segment-first, Dynamic Torque Vectoring All-Wheel Drive with Rear Driveline Disconnect. We tested it out on a brief off-road course, designed to show-off the new system that can direct up to 50 percent of the engine torque to the rear wheels, as well as distribute it to left or right rear wheel to enhance handling. Check out some footage of our off-road drive at Carmel Valley Ranch in the video below :

While that dirt course is clearly mild, and the RAV4 doesn’t have the off-road prowess of a 4Runner or Tacoma, the RAV4 did prove capabilities that should give the average buyer some confidence. We believe RAV4 customers are likely to purchase the Adventure grade to support active lifestyles and use it to go hiking, biking, camping, kayaking, skiing, and more. With the Multi-Terrain Select feature, the 2019 Toyota RAV4 Adventure allows the driver to maximize traction by selecting mud, sand, rocks, dirt or snow. So while you probably wouldn’t take it out for a day of serious off-roading, if there is a rough trail in between you and your intended activity for the day, we feel confident in saying that the RAV4 will help you get there. We were also quite fond of the screen in the Multi-Information Display that depicted torque allocation and slip control, which fluctuated while we were driving the off-road course. 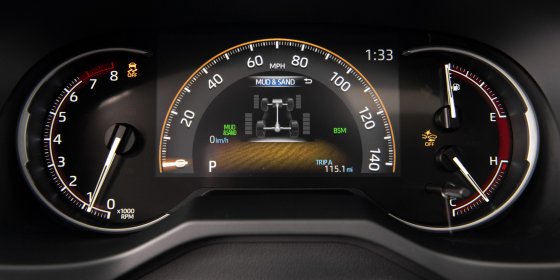 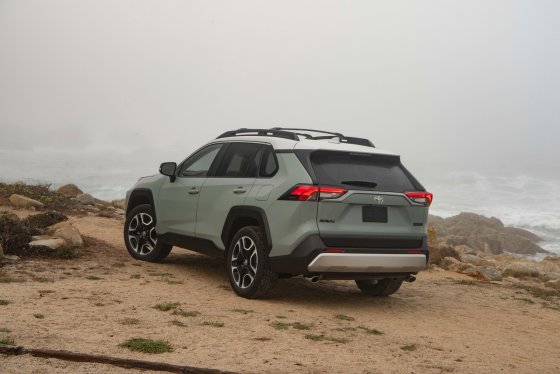 We’re big fans of the Toyota Tacoma, 4Runner, and the dearly departed FJ Cruiser. Those vehicles are capable of doing the off-road trail driving that we enjoy, and have the rugged styling that we prefer. While the RAV4 doesn’t really belong in that grouping, the 2019 Toyota RAV4 Adventure is surprisingly fun and goes a long way to bridging that gap. It’s tougher and more capable than any RAV4 we’ve ever driven before, and has some new styling to match. You can get into the new RAV4 at $25,500 for the LE, with the Adventure grade priced at $32,900. The 2019 Toyota RAV4 Adventure will arrive in dealerships in December with the Hybrid models following early next year. No doubt, they have another winner and you’ll be seeing plenty of them on the road very soon.