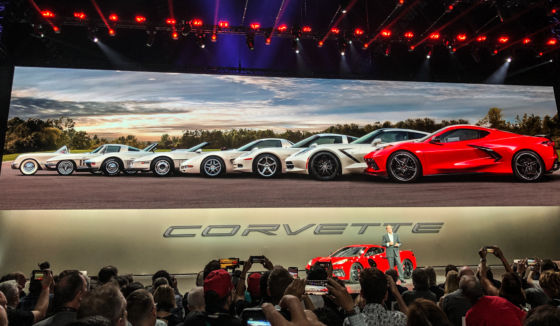 The rumor of a mid-engine Chevrolet Corvette dates back many, many decades. Belgian engineer Zora Arkus-Duntov observed the advantages of a mid-engine layout on the race track as early as the 1930s. That catalyzed in the 1950s when Zora, now employed by General Motors, observed the front-engined Corvette fail to beat the mid-engined competition on the track.

So to say that the 2020 Chevrolet Corvette, which debuted this past Thursday, was a long time coming is a severe understatement. We were fortunate enough to get an invite and we’re going to take you along with us for what ended up being a historic moment for more reasons than just the mid-engine layout.

To many, the idea of the engine behind the driver in a Corvette was sacrilege, but Zora and company were working on the idea for quite some time. In 1959 Chevrolet developed a mid-engine concept with the V8 behind the driver. On display in Tustin, CA this week was the car that immediately followed that concept, the Chevrolet Engineering Research Vehicle (CERV). 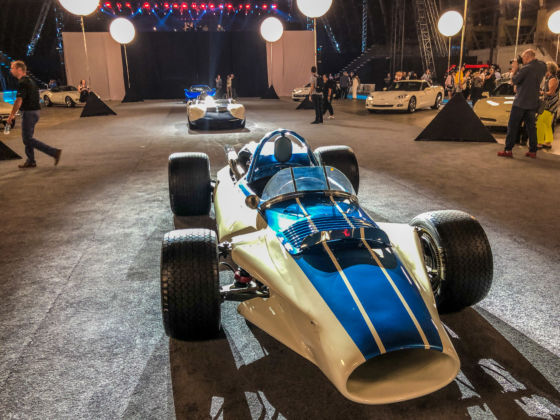 The original CERV was an indy-style racer powered by a big Chevy V8 and featuring an independent rear suspension. It was truly a pioneer for future fast Chevys. In 1963 GM created the CERV II, yet another mid-engined race car designed to run with the Ford GT at LeMans. 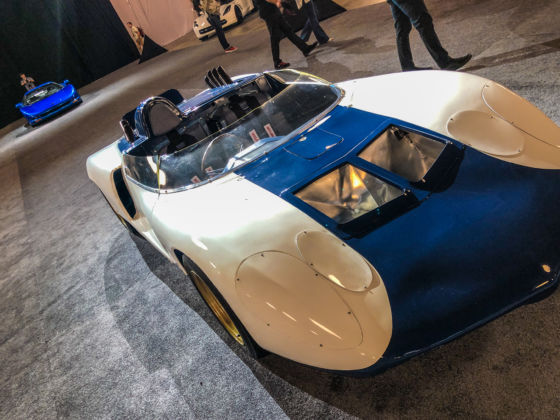 The CERV II never made it to the track, but Zora was given the green light to continue using the CERV program to further develop more exotic iterations of the Corvette. 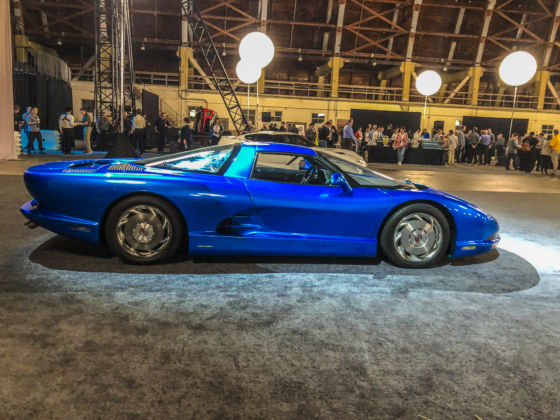 Over the next few decades even more concepts would come and go with everything from AWD to a Wankel engine. This all led up to the CERV III which broke cover in 1990 at the Detroit Auto Show. 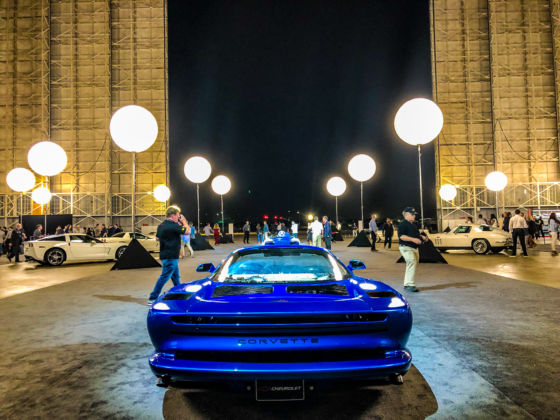 Once again it was thought to be the next Corvette, but in reality its mid-engine all-wheel-drive setup wasn’t meant to reach production. Although it’s easy to see some C5 Corvette in the CERV III’s design.

All Roads Lead to Tustin

Tustin, California has some pretty impressive history as well. Established in 1942 as Naval Lighter-Than-Air Station Santa Ana, the two wooden hangars in Tustin are designated as National Historic Civil Engineering Landmarks. Visiting this backdrop for the mid-engine Corvette reveal was an impressive experience. Home to blimps that patrolled the U.S. coast during WWII, the two hangars remain some of the only all-wooden hangars left in the country. 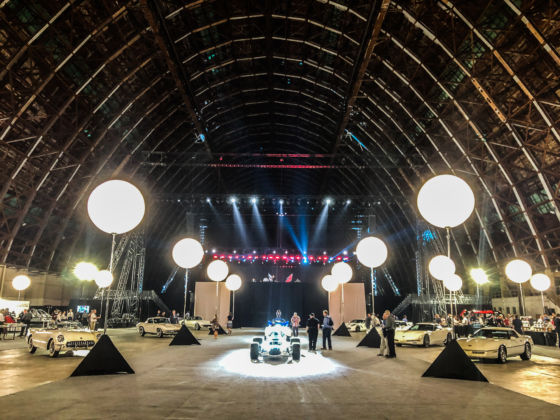 The event started with a parade of Corvettes, their owners invited by GM to come see what’s next. The hangar doors opened and the owners, along with a handful of Chevrolet dealers and us media-types, trotted in. 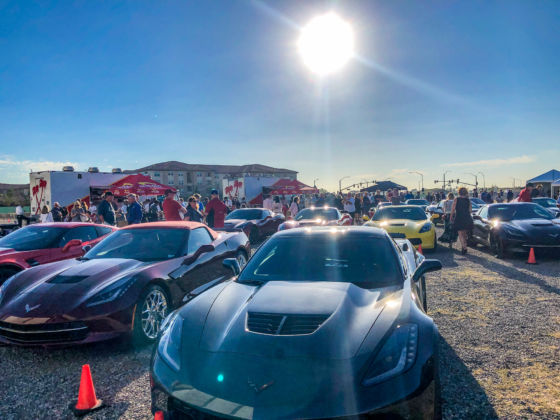 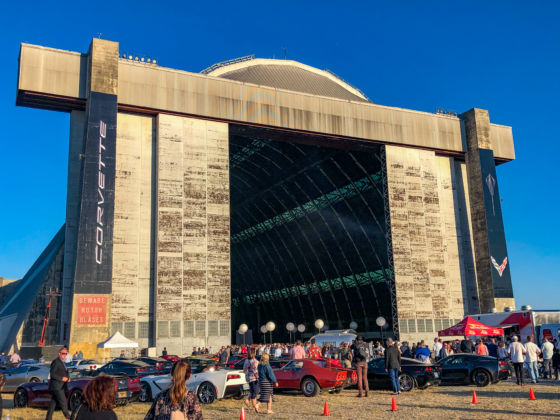 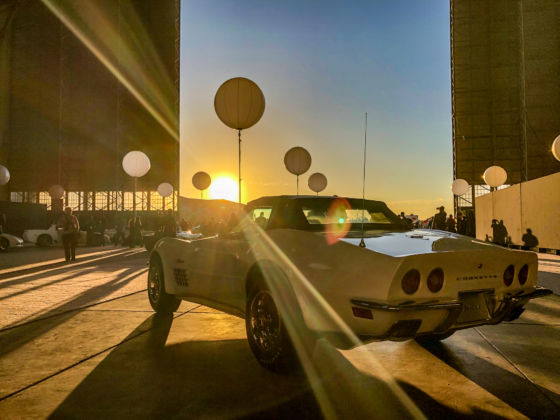 It’s unclear if Chevrolet chose to align the unveiling of the new C8 Corvette with the anniversary of the moon landing, but it worked. Astronauts and Corvettes have been inexorably linked since the beginning. Florida Chevy dealers capitalized on early Corvette purchases by astronauts by basically giving them away to future NASA pioneers interested in going fast on the ground as well. 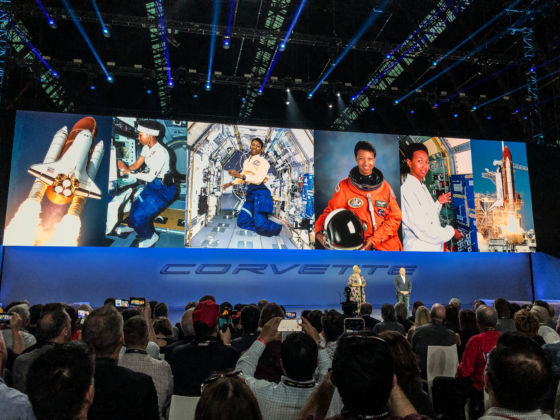 So it was with that backdrop that astronauts Dr. Mae Jemison and Scott Kelly took the stage. Dr. Jemison is an engineer, physician and astronaut and has truly made an amazing contribution to the world. Kelly was an F-14 pilot and has made recent trips to space, spending more time in the International Space Station than any other American. 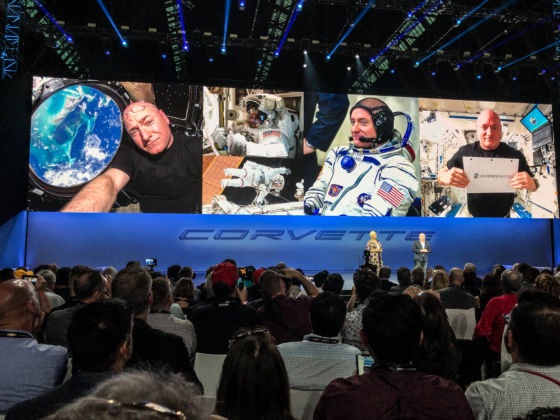 With history behind us, it was the big moment. All eyes (and cell phone cameras) were transfixed on the stage, it was time to see the 2020 Chevrolet Corvette. Well at least in person, the images leaked as we were on the shuttle over from the hotel. Spoiler alert! 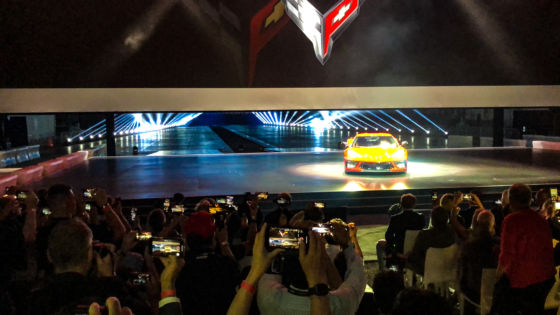 GM President Mark Reuss drove out on stage in a Torch Red Z51 Chevrolet Corvette. After decades of rumors it was real, live, right in front of us.

Reuss had a lot on his shoulders on this big night. Debuting the mid-engine Corvette wasn’t enough, we wanted more. Specifically we needed to know how much power it would have and how much it would cost. We got that, and more. 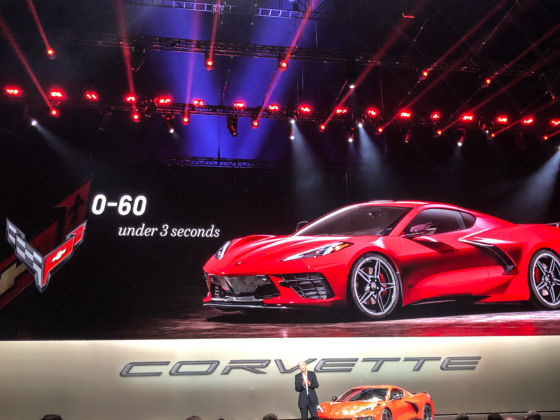 The 755 horsepower C7 ZR1 Corvette can hit 60 miles per hour in a claimed 2.85 seconds. So the revelation that the C8 (in Z51 guise) can hit that mark in a sub-3-second time was huge news. We noticed audible gasps from the audience.

Future versions, some likely using a hybrid-V8 and most likely using the ZO6 and ZR1 designations, will surely rise in price beyond the 6-figure mark. Still, this was huge news and elicited an even more raucous reaction from the audience. 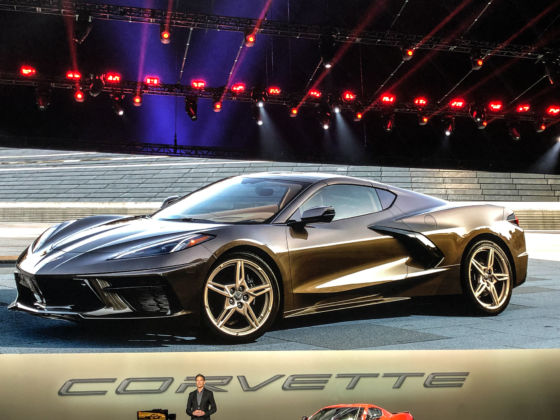 Looking at the design of the mid-engine Corvette, we’ll start with the outside which is gorgeous. Many likened it to a Ferrari F430, which is quite a compliment in our book. Early leaks showing an odd rear end turned out to be taken out of context. While that was indeed a (grainy) look at the back of the C8, when viewed as a whole car it looks fabulous.

There are a dozen exterior colors to choose from, up two from the current C7’s 10 colors: 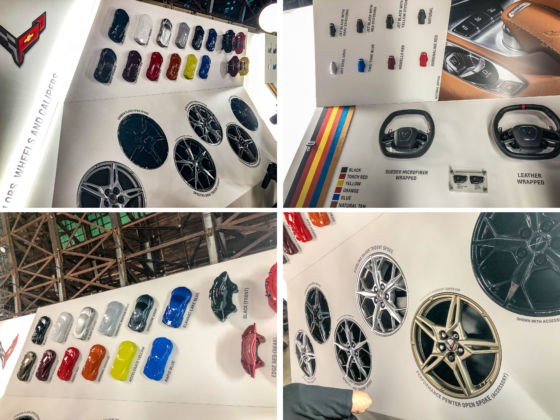 Naysayers have been saying that, regardless of performance and exterior design, the interior of the new C8 will most certainly suck. We can say with some authoritativeness, if that’s a thing, that they are very much mistaken. 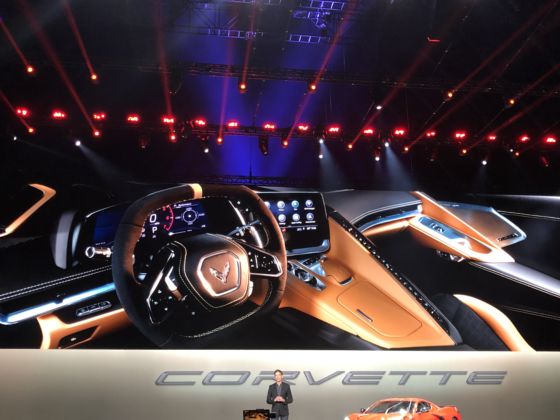 GM invested a great deal of time on the inside of the latest Vette. Materials are first-rate, we overheard one Italian-sounding gentleman note that the fabric and stitching on the inside of the removable targa-roof reminded him of a Lamborghini. He was correct, there is a lot of wow-factor on the inside including the performance-minded steering wheel and driver-focused layout.

The driver-centric cockpit features a 12″ display and an array of buttons lining the long arching extension of the dashboard. That’s feature is already controversial, but we think it’s cool. There is only one knob, the radio volume. GM clearly went for simplicity over complexity. Even the air vents are intentionally narrow to keep forward visibility high.

Colors on the inside are also plentiful with eight different palettes to choose from. 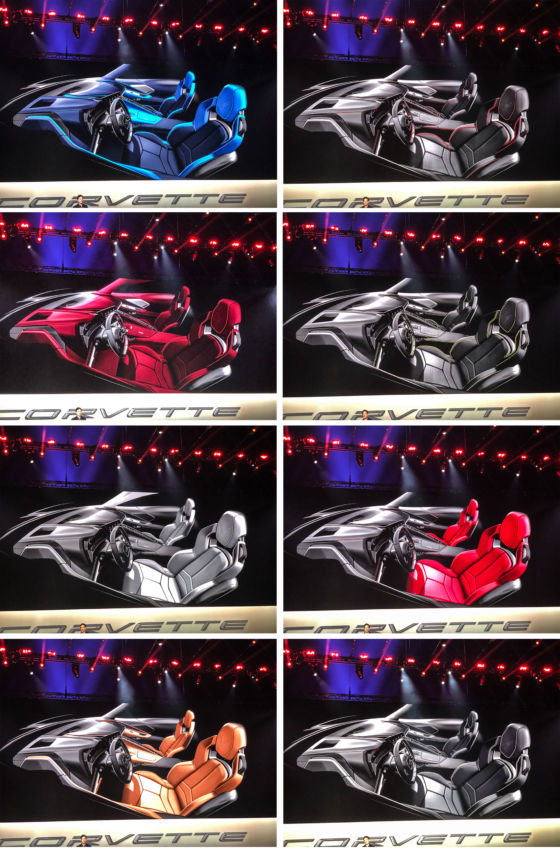 You can even fit a bunch of Corvette matched luggage inside. And yeah, golf clubs too. 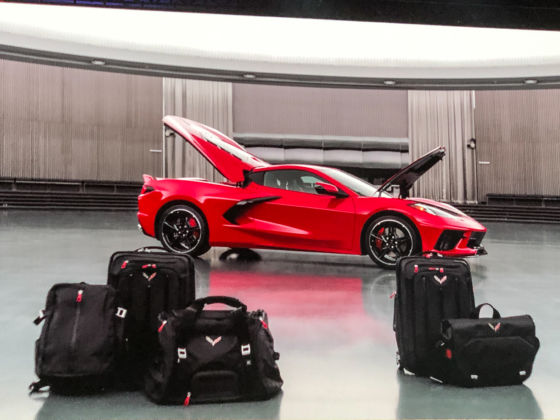 We all knew the Corvette would be fast, and Reuss’ revelation about a less than 3-second 0-60 time confirmed that immediately. The new Corvette bucks the forced induction trend by continuing to use a 6.2L LT2 engine featuring 495 horsepower and 470 ft. lbs. of torque. With a dry sump setup and new 8-speed DCT transmission, it’s got all of the right performance tools. 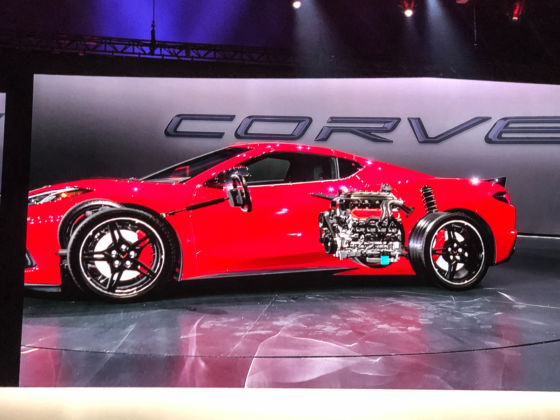 Reuss noted that there is a low first gear to get off the line quickly, and gears 2-6 are close together to keep the engine near the power peak on track. Gears 7-8 are tall for economy and highway cruising.

The previous Corvette modes for weather, sport, tour, and track are back but now you can utilize “Z-mode” which brings together your favorites from each setting in a personalized quick-select 1-button setting.

There are a lot of implications to the C8, in particular the disposition of the front-engine Corvette. The running story is that, when the current C7 ends production, there will no longer be a Corvette with an engine in front of the driver. Chevrolet has seemingly embraced mid-engine as the long-term layout for “America’s sports car” and in all likelihood what you’re seeing here will be the only Corvette moving forward. 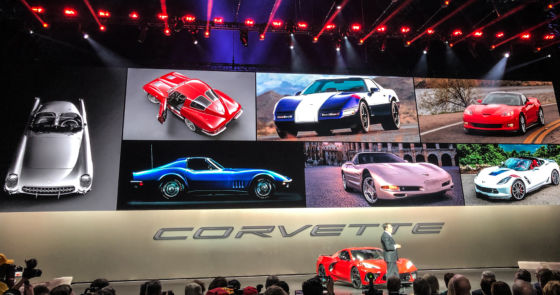 In a sense, that’s sad. Starting in 1953 the front-engine C1 Corvette became an icon. That continued through six more generations of impressive cars. Although, the realist in us likes progress, and the mid-engine layout is clearly superior. The passenger compartment has moved up 16.5″ helping with weight distribution, and with more weight sitting directly over the new limited-slip differential it’s faster in just about every way.

Expect an even faster ZO6 and ZR1, the latter likely to have a hybrid-enabled 1000 horsepower or more. Depending on price, that should be a literal giant-killer. It was an amazing experience seeing the new C8 2020 Corvette in person and we can’t wait to see what comes next.