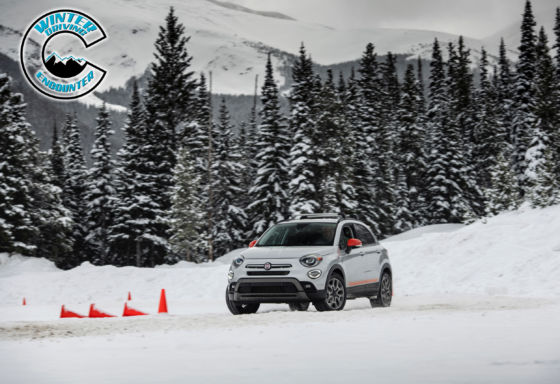 Spin, slide, twirl, and gymkana in winter snow and ice in Colorado. This is our third year doing it (2018, 2019) and this time, every car was what we’d classify as “normal.” With several manufacturers, including Nissan, Acura, Fiat, Honda, and Dodge, attending, we had a lot of great vehicles to choose from. We didn’t choose, though. We just drove them all. Hard.

Winter driving is mostly about feathering the pedals and using common sense. We didn’t do any of that. We did use winter tires, though. Which is highly recommended when driving in snow and ice. But a judicious throttle and careful brake use? Nope. Totally ignored that advice. Ask any kid with helicopter parents: nothing fun is “safe.” 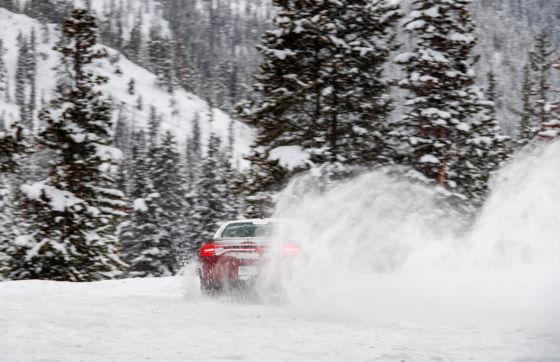 Joking aside, we were in a closed lot with professional drivers and plenty of room to have fun without getting into serious trouble. If we got stuck (surprisingly, this didn’t happen), there were people to pull us out. If we went a little astray and dinged up the car a bit, there were people there to give us a bunch of paperwork to sign. This being the third year we’ve done this, nothing was really new. Except the vehicles present.

Ever Wonder How Your Car Does In Snow and Ice? 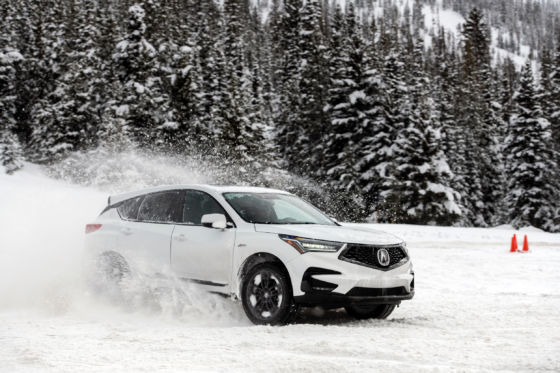 The Acura was the only vehicle returning from last year’s event. The 2020 model year doesn’t see much change from 2019, so what we’d learned last year still applied this year. In a nutshell, Super Handling All-Wheel Drive in Snow mode and a careful foot means that the RDX stays in the predictable line the driver hopes to maintain on the slippery road. Turning all of that off allows the 2.0-liter turbo to go crazy pushing power all around and allowing a lot of hoon in the snow. 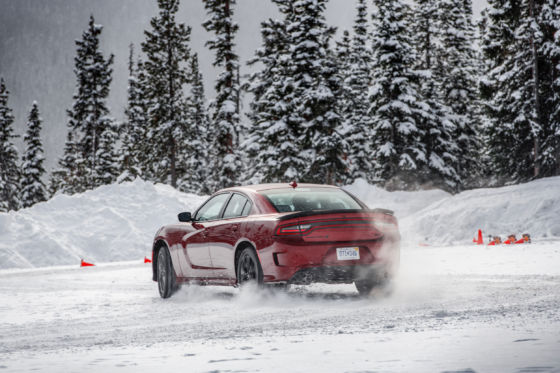 New for this year, the GT model with all-wheel drive is very much like the Challenger GT in the four-door Charger format. It’s extremely likable with 4,000 pounds of good times designed in. Being heavy, the Charger does not do really well in the snow when driven like a smaller car. The physics must be accounted for, but the AWD does very well when that’s done. Those physics also come into play when playtime is on.

The Charger GT was, we feel, the most fun to drive at this event. Snow and ice are great motivators for sliding, rooster tails of spin, and drifting hoons across the lot. The dynamics of a big car like this are almost intuitive to most drivers and the V6’s long band of push is highly conducive to powering into and out of heavy snow. Good times for sure. 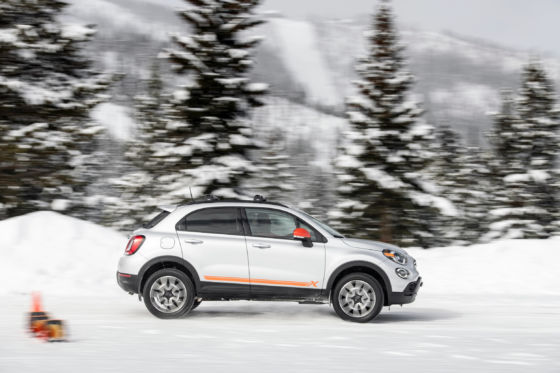 The Fiat was the surprise of this year’s event. Frankly, nobody expects much from any of the 500-series Fiats. They’re tiny, they’re quirky, and they’re generally not well powered. The 500X gets AWD as standard this year, a nice upgrade, and has hidden Jeep gems in its build. The 500X shares its platform with the Jeep Renegade and is built alongside it in Italy. Add in the unusually peppy little turbocharged four and the Fiat 500X is more than expected. It’s great when the goal is to stay safe, but even better when the goal is to get janky.

The turbo takes some time to master. There’s a decidedly long lag (almost two full seconds) between pedal press from a stop and actual turbocharger engagement. Learning that and the way the engine engages at various speeds requires some patience. Once that’s understood, though, the little 500X becomes extremely fun to throw around on snow and ice. This car became our second-favorite, after the big Charger after we’d mastered its use. 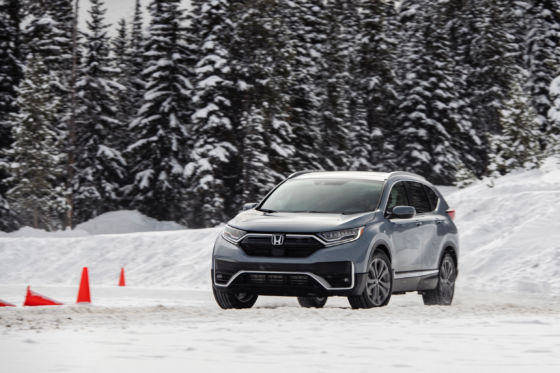 At last year’s event, we had the Honda Passport and the year before we’d had the Honda Pilot. The smaller CR-V was expected to be similar in most ways. It was, when safety was the goal and all systems were engaged. Getting the Honda CR-V to slip or slide takes work and effort when its safety systems are on. This makes it one of the safest out-of-the-box options at this event. That comes with some downers, though.

Namely that the CR-V has very lackluster acceleration and almost no “turn off the nannies” capability. These work well in its favor when safety is the goal. They work hard against it, though, when trying to slide sideways or turn donuts in the snow. Great for the A-B daily, not so great for the parking lot hoonigan. 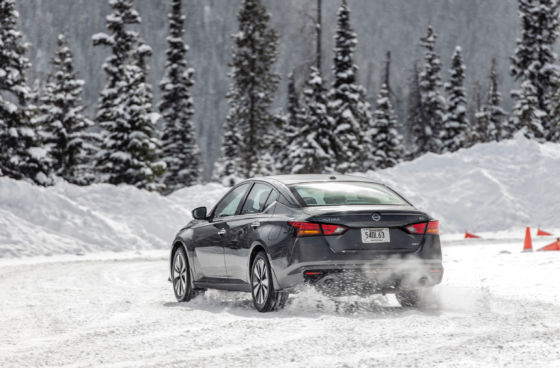 Nissan finally put all-wheel drive into its two most popular sedans, the Altima and the Sentra. The Altima’s AWD is fixed, however, and not driver controlled. This means it cannot be switched on and off by the driver, but instead works entirely independently according to sensor inputs. Traction control, too, is mostly always-on. This makes it a no-brainer when driving safely in terrible weather.

The Altima sports a continuously variable transmission (CVT) and a just-about-right engine, which pair to keep things safe, quiet, and controlled. At an event like this one, that makes it safe, sure, but not fun. With some work, the Altima can be made into a bit of a spinner on the snow, but the payoff isn’t really worth the effort. For safe daily driving, though, this car gets props. 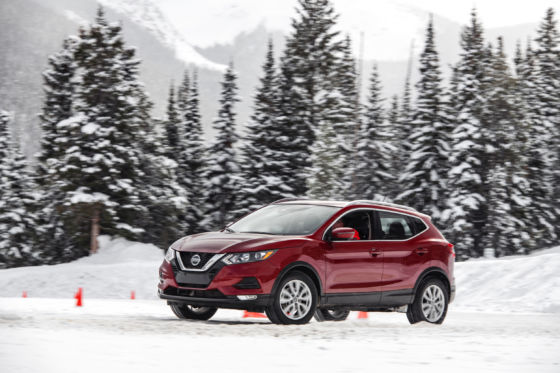 Last on our alphabetical list is the Rogue Sport. Nissan introduced this Americanized Qashqai a couple of years ago and it’s been a hit. Smaller than the standard Rogue, the Rogue Sport shares almost nothing with its namesake. It’s instead a Euro design with a peppier engine and more wheel-to-corner build. It’s not a sports car, of course, but it does have advantages over the Altima. Foremost is its slightly taller stance and more crossover-SUV-like physics.

When safety is the job at hand, the Rogue Sport does well. It’s not quite as easygoing as is the Altima, but it’s close. When hooning, though, the Rogue Sport allows a lot more movement. This is, as mentioned, because of its design. It’s a bit higher and a bit heavier and that makes a lot of difference. It was a lot of fun in the snow. 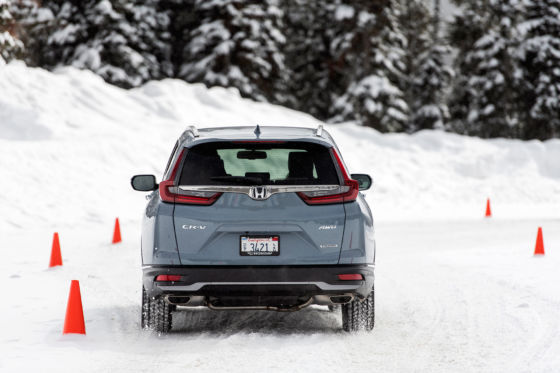 We learned a lot about the safety systems built into today’s vehicles. Rocky Mountain Redline‘s Colorado Winter Driving Encounter is always a great event for that. We also learned that little things, like engine and transmission choice, can also have a big impact on winter driving safety. Finally, though, the driver is clearly the most important factor in winter driving–whether for safety or fun. Taking the time to learn the vehicle and its dynamics really pays off.

See more winter driving fun in this video from The Awesomer!