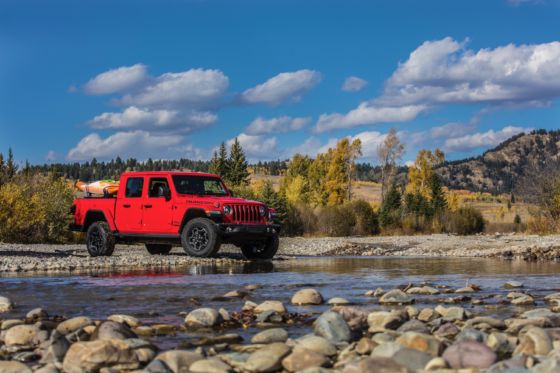 As one of the most-anticipated vehicles of the year, the Gladiator hit the market running and has been selling like microbrew at a hipster convention. As a wonderful mashup of a Ram 1500 and a Jeep Wrangler, the Gladiator dominates the arena.

The 2020 Jeep Gladiator doesn’t lack for competition in the midsized off-pavement-ready truck arena, however, as the Trail Trek Tour has demonstrated. The Gladiator is, however, uniquely Jeep and much more than just a Wrangler with a bed on it. There are three basic flavors of Gladiator, the most off-road-ready version being the Rubicon. We’ve had a chance to drive a Sport and Overland too, finding them to be very capable trucks, but for going off the beaten path to make your own route, nothing bests the Rubicon name. 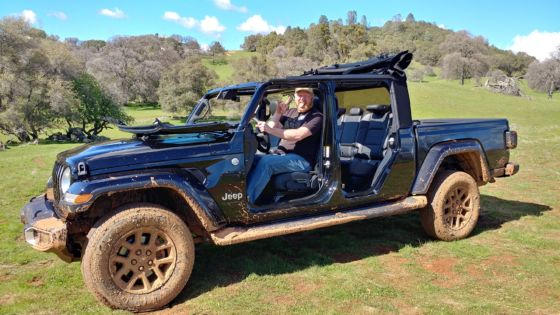 Where none can compete, of course, is with the Jeep Gladiator’s removable top and doors and windshield drop. Add in the huge catalog of accessories available from Mopar (Chrysler’s after-sale outfitter) and the unusually astute truck-based utility of the Gladiator and things get even better. 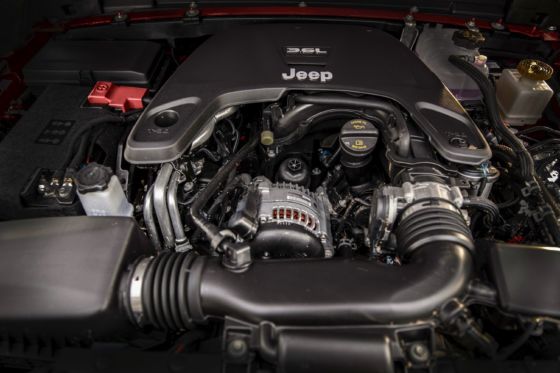 The Gladiator Rubicon uses the same 3.6-liter V6 Pentastar engine that’s found in the Wrangler and several other Jeep products. It’s tuned to produce 285 horsepower and 260 pound-feet of torque, which it then sends to either the rear wheels or all four wheels in a drivetrain very much taken from the Wrangler. Built for maximum torque delivery, this engine sends power to the transfer transmission, transfer case, and Dana axles at a rate of up to 77.2:1 in low first.

Even with all of that grunt to the wheels, the Gladiator Rubicon has a tow rating of 7,000 pounds and a cargo rating of 1,600 pounds. That’s a lot of gear and passengers, and it can tote it all off the road and into the hinter. Because Jeep. 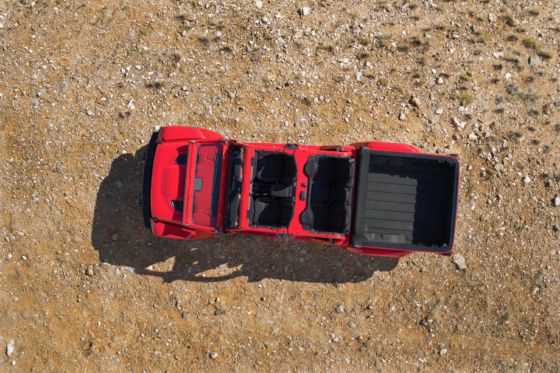 The five-foot box behind the Gladiators cabin is useful in a lot of ways. The wheel wells are squared off, matching the signature hexagonal design of Jeep wheel wells. The flat top to the wells in the bed serves a purpose, though. It allows plywood (or similar-sized items) to sit flat across the wells. To aid this, the rear tailgate can have its catch cables hooped around the latches to put the tailgate at a 45-ish angle in which the edge of the tailgate then sits exactly even with those wheel well tops to support the other end of the load. Indents in the bed allow for 2-inch thick lumber (2×4, 2×6, etc) to be fit for load division as well. Tie-downs and indents at the head of the bed against the cab also allow for easier placement of a motorcycle or bicycle for upright placement. 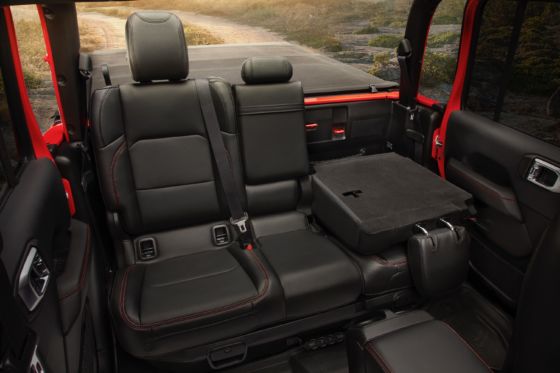 Lots of thought went into those little things that matter for the Jeep Gladiator. Beneath the rear seats are storage boxes for holding varied gear. That box is open all the way from one door to the other, when the dividers are removed, allowing for a full bow or short rifle to fit and the lid to close on top of it. Not only does the storage lid close (and lock), but the seat bottoms then lower on top of that and also lock in place when the doors are locked. Securing whatever’s inside.

Optional equipment includes a portable Bluetooth speaker that hides behind the rear seat back. This waterproof, weatherproof, portable unit can be tied to a phone or player and toted around outside of the vehicle at will. It then slots back into place and recharges from the Gladiator’s electrics as it’s driven.

Taking off the roof or doors? Dropping the windscreen? The ratchet set that comes with the Gladiator can do all of that easily. Underneath the rear seat is a special container with slots for those screws to fit, all nicely pre-labeled, so they stay secure and don’t get lost. Everything that doesn’t bolt down is zippered or velcroed, making most of the roof and panel removal an easy one-person job. 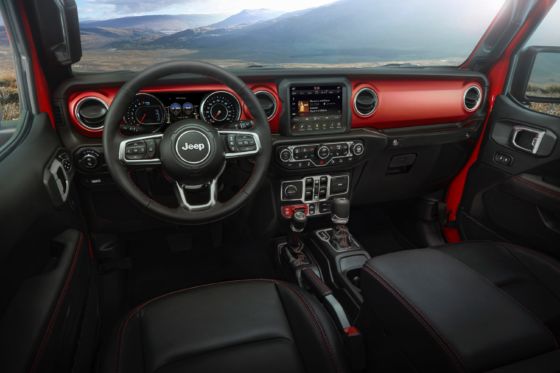 Most people familiar with the interior of the current-generation Jeep Wrangler will fully understand the Gladiator’s interior layout and controls. Including the latest generation of Chrysler’s Uconnect infotainment system and the intelligent placement of off-road controls for the added goodies found on the Rubicon model. Like the front disconnecting sway bar, front trail camera with built-in washer, etc.

In short, Jeep seems to have taken all of the best parts of a Ram pickup truck and incorporated them into a Wrangler to make a Gladiator that enthusiasts can really like.

Capability and Performance On the Road 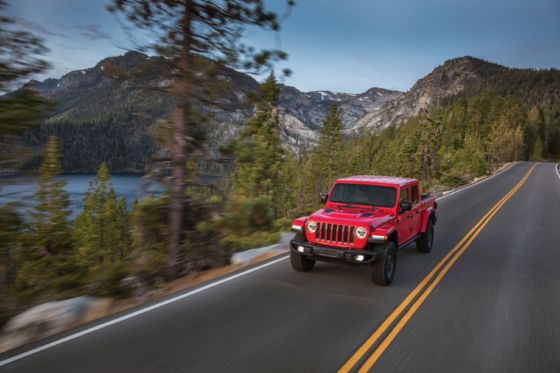 As a daily drive passenger vehicle, the four-door Gladiator is more comfortable on the road than is its Wrangler counterpart, but not quite as smooth as is the larger Ram 1500. It fits somewhere in between. The Gladiator Rubicon model is the roughest ride on the road, but still far smoother than even the best of the Wrangler models. The Gladiator Overland model is probably the best option for road driving, with less aggressive tires and a less rugged suspension.

Fuel economy is not all that great, compared to some options, but Jeep promises a diesel model for 2020 that will improve that. With the Wrangler getting a plug-in hybrid option soon, we suspect that will also get added to the Gladiator too.

Getting Out With the Gladiator Rubicon 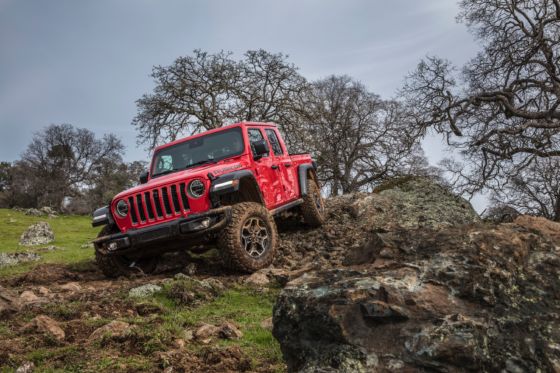 The Rubicon model is, of course, expected to set the standard for off-road performance in whatever segment it’s in. With the Gladiator, that would be midsized pickup trucks. In many ways, the Gladiator definitely does that, with a more rough-and-tumble feel than most and the looks to promise lots of capable action.

For us, the Gladiator Rubicon proved itself as a great everyday truck, in terms of the expected small truck capabilities such as towing and hauling. It’s also solidly off-road capable and able to climb rocks and bog mud with abandon. The Jeep Persona is a big part of the Gladiator’s appeal as well, we’ll fully admit, and it’s catching. 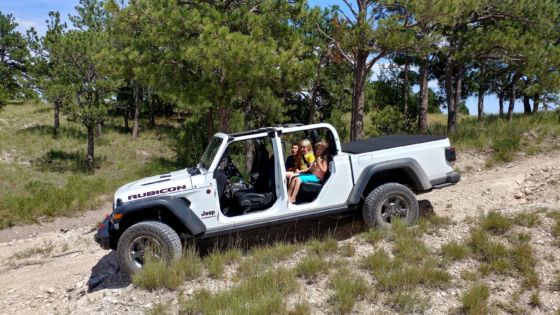 We had a great time climbing hills, sloughing through mud, bouncing over rocks, and more in the Gladiator Rubicon. It’s definitely a Jeep and worthy of the Rubicon nameplate.

Compared To Other Midsize Off-Roaders 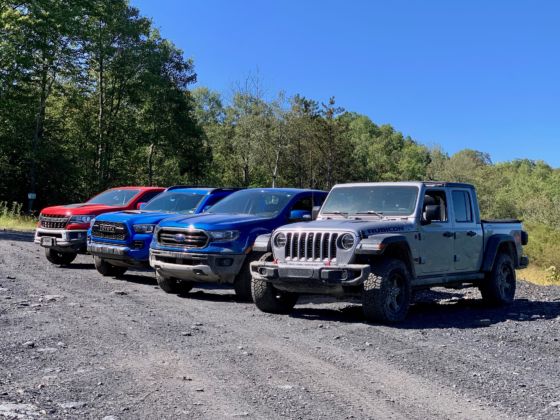 Compared to nearly everything we’ve driven in this segment, the Gladiator sets the bar. The Gladiator Rubicon, for example, can tackle almost anything a Wrangler Rubicon 4-door can, having similar approach and departure angles and only losing out in breakover.

Most of the competition against the Gladiator Rubicon is found in the Toyota Tacoma TRD Pro and the Chevrolet Colorado ZR2. Each has strengths and weaknesses, as there are a few things the Jeep can do the Toyota cannot and a few things the Chevy can do that the Jeep cannot and things the Toy can accomplish that the Chev cannot. It’s mostly a matter of purpose and preference. In all honesty, for 99 percent of buyers in the off-road segments, any of these three choices is a solid one. It’s about style. 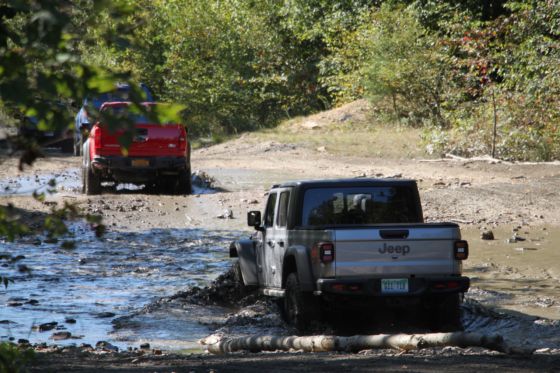 The good news is that the unmistakable, iconic Jeep style that’s portrayed by the Gladiator is not just show. It will do what the name Jeep implies it can do.

For detailed comparisons of the Jeep Gladiator Rubicon to its competitors in the Midsize Truck segment, check out content from the Trail Trek Tour’s head to head off-road event. 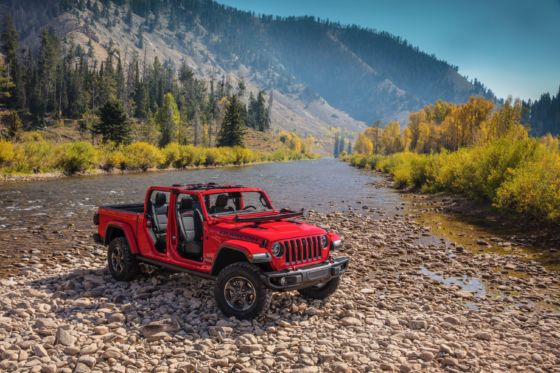 The 2020 Jeep Gladiator Rubicon is a wonderful off-road rig. It carries the load, gets you where you want to go, and does so with a lot more convenience than might be expected. It’s a capable daily drive pickup for the occasional box store shopping, home improvement store run, and “my friends are moving across town” weekends. The Gladiator is also a more than capable off-road goer and gets extreme about that in the Rubicon package.

In short, the Jeep Gladiator is a great little truck.