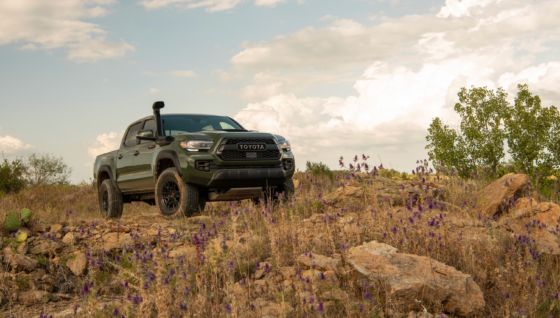 “When the dirt calls, the highly capable 2020 TRD Pro Series brings the toughness you need to rule the off-road.”

Last fall, Toyota invited us to Texas to go off-road in their new lineup of 2020 TRD Pro series trucks and SUVs. We spent a day rallying through the dirt, splashing in the mud, and getting dirty in the 2020 Toyota Tundra TRD Pro, 2020 Toyota Tacoma TRD Pro and Off-Road, the 2020 Toyota 4Runner TRD Pro, and the all-new 2020 Toyota Sequoia TRD Pro.

The lineup gets some upgrades for this new model year. Starting with Android Auto as standard across the board, joining Apple CarPlay which entered vehicles last year as standard equipment. Also new and exclusive to the TRD Pro lineup of trucks and SUVs is a great-looking new forest green paint, which is featured in Toyota’s photos here. Called Army Green, the paint is an OD-style color with a gloss finish. A few other updates to various vehicles were also added and we’ll detail those as we go along. 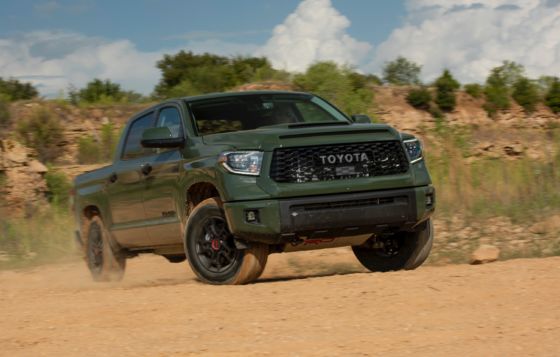 For the 2020 model year, Toyota has added the TRD Pro package in the Tundra’s smaller Double Cab model, giving buyers more choice in cab configurations for the off-road packaging. Also new this year is a 7-inch infotainment screen as standard with an 8-inch touchscreen as an upgrade option. 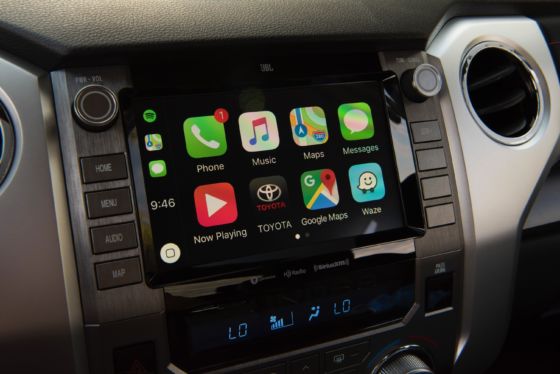 The Tundra TRD Pro itself is exclusive in its featuring of the Toyota RAcing Development gear for off-pavement jaunts. These include Fox Internal Bypass shocks, Rigid Industries fog lamps, and forged aluminum BBS wheels. TRD tuning to the exhaust and intake create a signature sound for the Tundra and TRD load spring tuning improves off-road prowess while adding 2 more inches of front lift for the truck to better the approach angle. This is augmented by an extra 1.5 inches of front wheel travel. Rear shocks feature piggyback reservoirs for constant damping on the 2.5-inch Fox IB shocks. The TRD Pro model comes exclusively with 18-inch BBS forged aluminum wheels, which reduce unsprung mass by 3.35 pounds per wheel.

All of this comes together off the road for a loud-grunting, strong performance style in the Tundra TRD Pro. We took it through the dirt, over rocks and into the mud without a single complaint. From us or the truck. The Tundra is a solid performer. 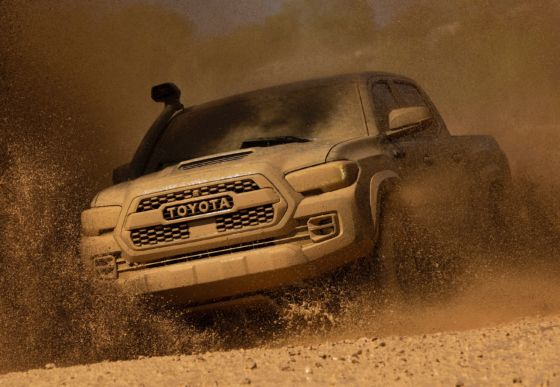 The little Taco Truck gets a few updates for the 2020 model year in its TRD Pro packaging. Chief among these is the electric-adjust power driver’s seat, which alleviates some of the issues many have had with the Tacoma’s seating position. A new Multi-Terrain Monitor (MTM) system adds cameras to the Tacoma’s off-road package for better visibility when off the pavement. 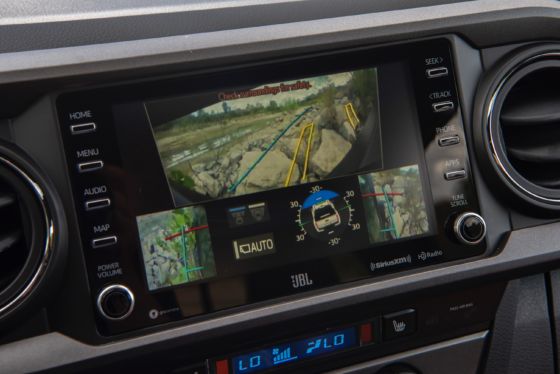 Both upgrades are a big deal for the 2020 Tacoma. Each Tacoma grade now has differentiation in its exterior look to set it apart from the others in the line. The TRD models, starting with the TRD Sport, have more aggressive front grilles and a more pronounced protective plate below to accentuate the approach angle. The TRD Sport receives “blackout” packaging to set it apart from other TRDs. The TRD Off-Road receives chrome inserts around LED lamps front and rear. The TRD Pro model Tacoma has a unique front grille, black-insert lamp surrounds, and is visibly taller than other Tacoma models.

The Tacoma TRD Pro is otherwise unchanged from the 2019 model year, with the same capable V6 and strong-performing off-road excellence. The Desert Air Intake is still available, adding a snorkel that raises intake from the grille to above the truck to reduce the amount of dust taken in.

The new MMT system adds to a Panoramic View system (360-degree cameras) for the Tacoma. MMT adds another camera to the front grille, looking downward, and improves the side view cameras for better viewing angle when scouting off-road. This lets the driver see terrain around the truck with a button press, helping navigate more difficult spots when a spotter isn’t available or is unable to see everything around the truck.

All of these gadgets came in handy as we dug the Tacoma TRD Pro through the mud and climbed along the rocks next to a sheer drop-off. 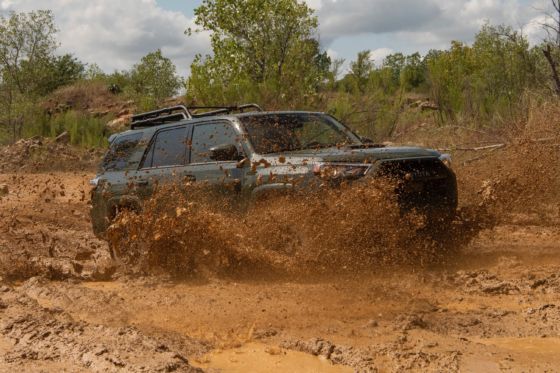 Several additions come to the 2020 Toyota 4Runner this year, starting with Safety Sense now being standard equipment across all 4Runner grades. A new 8-inch multimedia system is also added as well as a 4.2-inch driver information screen in the newly-updated instrument cluster. Two USB ports were added to the second row of the 4Runner and the new TRD Pro model gets a TRD-branded Cat-Back exhaust for better sound. Toyota has, incidentally, also added a new 4Runner Venture model to the fleet, placing it between the standard 4Runner models and the TRD series in capability. 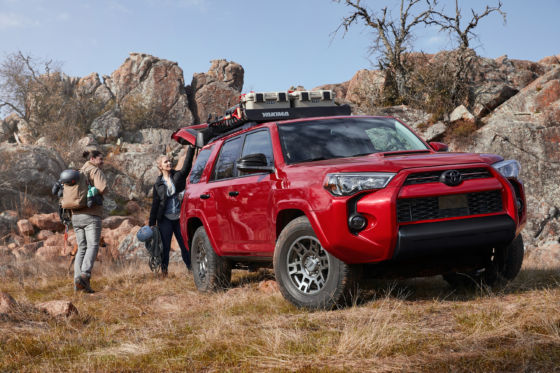 The exhaust setup is exclusive to the TRD Pro model of the 4Runner, though, and really adds some muscular grunt to the SUV’s sound quality. Especially when standing outside of the rig upon startup. This aggressive upgrade aids the strong look of the 4Runner TRD Pro, which can also be had in Magnetic Gray Metallic (popular on the Tacoma TRD). 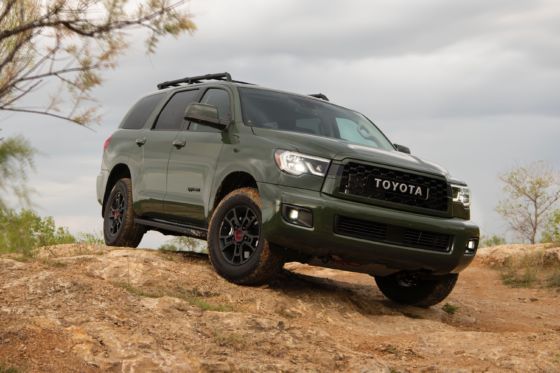 All-new for the 2020 model year, the Sequoia TRD Pro takes the big SUV to a new level as an off-road powerhouse. Using the same heavy-duty V8 found in the Tundra, the Sequoia TRD Pro can now take up to seven people into extremes of terrain. It’s a massively awesome rig for serious off-roading.

Also new for the Sequoia is the addition of an Amazon Alexa option, which allows connection to an Amazon home system for various uses. Amazon-enabled lighting, alerts, etc. can all be access via the Sequoia now, as can queries and notifications. It’s a pretty sweet, natural language setup.

What’s really different in the TRD Pro model of the Sequoia, however, is how amazingly astute it is off the road. The standard 4×4 Sequoia is pretty good for general off-pavement going, so long as it’s not too tough or the mud too deep. With the TRD Pro upgrades, though, the Sequoia becomes akin to the Tundra with its SUV-tuned Fox shocks, clearance lift, and more. The Fox Internal Bypass shocks are tuned to allow internal bypass for varied situations, allowing the Sequoia to keep its comfortable on-road feel even with aggressive tires and all of the TRD Pro off-road gear on board. That’s saying something.

TRD tuning for the exhaust does something similar, keeping the relatively quiet and comfortable appeal of the Sequoia on the highway while adding strong notes and big engine growl when pressed into service for harder use. The available TRD Cat-Back exhaust only adds to this flavor.

Out in the mud, the Sequoia TRD Pro let out happy exhaust sounds as we splashed and played. On the hills and rocks, it plugged contentedly over the obstacles, and on the highway it was amazingly smooth and refined. The new Sequoia TRD Pro is definitely done right.

Our trip to Texas to get dirty in the late summer heat was well worth the exhaustion airports and muggy high temps bring. We had a great time out in the hinter playing with Toyota’s new TRD Pro lineup of vehicles. We’re glad to see the upgrades that’ve happened and are really excited about the very well-done 2020 Toyota Sequoia TRD Pro as a new addition.