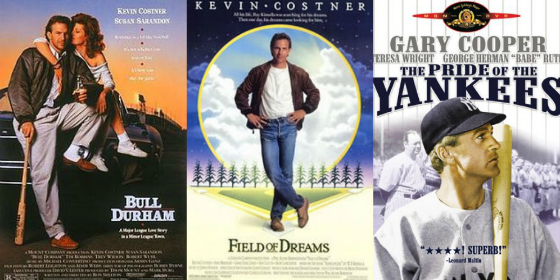 Editors Note : For Opening Day, we thought we would revisit this article from 2012, which was notably published before 42 was released. It is certain that 42 would easily crack the Top 15 now. Apologies for the missing Youtube embeds, that is kinda how the Internet works, sadly…

To celebrate this weekend’s release of Clint Eastwood’s Trouble With The Curve we have compiled our list of the 25 best baseball movies ever made.

Trouble With The Curve stars Eastwood as an aging baseball scout who tries to reconnect with his daughter, Amy Adams, through baseball (and Justin Timberlake).

The reviews haven’t been promising for potential movie goers. One of the kindest reviews comes from Deadspin Founder Will Leitch.

“Pretty much everything about Trouble With the Curve is a crock, but I couldn’t help but like it anyway. It has a hackneyed, painfully overstructured screenplay; its motivations for its characters are stock at best and embarrassingly obvious at worst; and it knows so little about the game of baseball in the 21st century that you half expect an ad for Ovaltine to pop up halfway through.”

So if Trouble With The Curve falls flat, we wanted to make sure you have a list of great baseball movies to watch this weekend. From Documentaries and Biopics to Comedies and Chick Flicks, baseball has always been a popular subject in Hollywood, so we wouldn’t be surprised to see new movies making this list in coming years (even if Clint Eastwood isn’t starring in them.)

We are cheating a bit for the first entry, as Brewster's Millions isn't strictly a baseball movie, but the main character is a semi-pro baseball player. The plot of the 1985 Richard Pryor comedy revolves around his title character, Monty Brewster, having to spend $30M in only 30 days, with nothing to show for it. It's kind of like running the Red Sox.

Another baseball comedy, Mr. Baseball features Tom Selleck as an aging American ballplayer who goes to Japan for one last shot at glory and a payday.  Selleck's Jack Elliot clashes with his manager, his teammates and Japan in general before finally getting with the program.

23. Angels In The Outfield (Original)

Janet Leigh headlines the 1951 original version of Angels In The Outfield as a reporter covering the downtrodden Pittsburgh Pirates and their foul-mouthed manager Guffy McGovern. McGovern gets some help, however, as a team of deceased ballplayers are willing to help the Pirates win if he will mend his ways.

The 19th century poem by Earnest Thayer has been told in movie form nearly a dozen times, but it's the animated version by Walt Disney from 1946 that introduced it to most children. It's told simply, but humorously, and is still memorable after 66 years.

The Rookie is the mostly true story of pitcher Jim Morris (Dennis Quaid). Morris was a high school teacher and coach who, at age 35, tries out for and makes the Tampa Bay Devil Rays. It's a traditionally uplifting Disney film, full of feel good moments and shmaltz, but it is a great story, done well.

20. Bingo Long And The Traveling All-Stars

19. It Happens Every Spring

What would you do if you accidentally discovered a chemical that repelled wood? What if it happened because a baseball destroyed your life work? Well if you are Ray Milland in this 1949 comedy you become the best pitcher in baseball.

Kevin Costner's first appearance on our list is as Billy Chapel, an old pitcher reflecting on life, love and baseball as he starts the final game of his career.

This compelling biopic tells the story of Red Sox player Jimmy Piersall (played by Psycho star Anthony Perkins). It's the compelling story of a player who had to battle anxiety and mental illness to make it in the big leagues.

The only movie on our list that was never released theatrically, 61* tells the story of Roger Maris and Mickey Mantle, and the chase for baseball's single season home run record. Barry Pepper earned a Golden Globe nomination for his portrayal of Maris, a good man who was tormented by the fans, who preferred the more popular Mantle. Produced for HBO, the film was nominated for 12 Emmy Awards, winning two.

Hollywood legends Jimmy Stewart and June Allyson star in the true story of Monty Stratton, a major league pitcher from the 30's who tries to return to baseball after losing a leg to a hunting accident. Winner of the 1950 Oscar for Best Writing.

Tommy Lee Jones plays the title character, the legendary Ty Cobb. Robert Wuhl plays a reporter who gets to know the real Cobb, the most hated man in baseball.

In 2003 author Michael Lewis profiled Oakland A's General Manager Billy Beane, who was trying to change the way baseball teams were run by focusing on statistics and market inefficiencies. A relatively dry baseball book, it was brought to life on the big screen in 2011 starring Brad Pitt as a fictionalized Beane. Nominated for six Oscars, including Best Picture.

12. The Life And Times Of Hank Greenberg

It takes a lot for a documentary to be considered a great movie, but The Life And Times Of Hank Greenberg qualifies. Combining interviews and archive footage, the film tells the story of Hank Greenberg, baseball's first Jewish superstar.

Nominated for two Golden Globes, Geena Davis, Tom Hanks, Madonna and Rosie O'Donnell tell the (fictionalized) story of the All American Girls Professional Baseball League. We follow the first season of the Rockford Peaches, an all-woman baseball team during WW2 through a mix of drama and comedy.

Robert De Niro stars as a young, slow-witted catcher who discovers he is dying. De Niro's character is befriended a protected by star pitcher Michael Moriarty in this 1973 film based on the book by legendary baseball fiction writer Mark Harris.

We are talking about the original version, as we refuse to acknowledge that the Billy Bob Thorton remake ever happened. The Bears were the worst team in little league baseball, until they get a new girl pitcher, a rebellious star outfielder and a drunken manager.  The politically incorrect and often offensive comedy has been a quotable hit since it's release in 1976.

The best straight baseball comedy ever made, Major League follows the standard formula for sports movies (bad team comes together to win) but does it with a ton of laughs. Wesley Snipes, Charlie Sheen and Tom Berenger play three ballplayers for the pitiful Indians in this humorous hit.

A lighthearted youth baseball flick, The Sandlot stars a cast of kids you've never seen again as a neighborhood baseball team going through the standard adventures of childhood, and a showdown with a baseball eating monster.

John Cusack stars as baseball star Shoeless Joe Jackson and the 1919 Chicago White Sox. The team is best known as the Black Sox, a label they received after throwing the World Series to get back at their penny-pinching owner. A slightly biased take on the true story, Eight Men Out relates all the facts of the original scandal in an engaging way.

Sugar is the Sundance nominated story of Dominican baseball players in America, through the life of the fictional Miguel "Sugar" Santos. A devastatingly honest look at the isolation and pressure felt by Dominican teenagers trying to make it to the major leagues, Sugar tells a story too harsh to be true, but that sadly is.

Baseball fan Barry Levinson directed this dramatic classic. Robert Redford stars as an over-the-hill baseball player who gets a second chance at a major league career after tragedy derails his first try. The final scene is one of the most memorable in movies, as Redford rounds the bases as lights explode behind him. Nominated for four Oscars.

Bull Durham probably doesn't belong on this list. Not because it isn't a great movie (it is) but because it isn't a baseball movie. It's a chick flick set in the world of minor league baseball, as career minor league catcher Crash Davis (Kevin Costner) and future superstar Ebby Calvin "Nuke" LaLoosh battle for the heart of the original baseball Annie (Susan Sarandon). Nominated for one Oscar and filled with so many great lines we couldn't include just one clip.

2. The Pride of the Yankees

This biography of Lou Gehrig, the Yankee's first baseman who had passed away the year before, was expected to fail at the box office. That wasn't the case, thanks to the strength of the performance by Gary Cooper, and the appearance of Yankees stars and Gehrig teammates like Babe Ruth, Bill Dickey and Bob Meusel. It's an emotional story, told honestly and well, and was nominated for 11 Oscars, including Best Picture.

The 1989 fantasy drama features both Kevin Costner and James Earl Jones in their third appearance on our list, backed by Ray Liotta and film legend Burt Lancaster. It's the story of a middle-aged man in Iowa who hears a voice telling him turn his farm into a baseball diamond that will be populated by the ghost of baseball players, including Shoeless Joe. A cross-country road trip to meet Jones and Lancaster, and the eventual touching reunion with his deceased father, make this story both enjoyable and heartwarming. Nominated for three Oscars, including Best Picture, Field Of Dreams also includes one of the best movie speeches of all time.