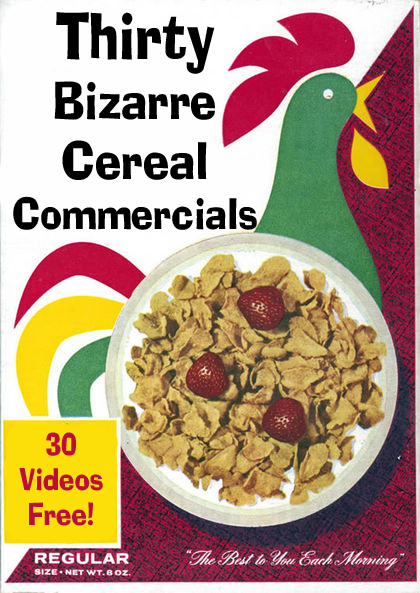 So. You think those Kellogg’s Corn Pops ads and the ones for Reese’s Puffs are about a silly and bizarre as you can get when it comes to cereal ads, huh? Well, then in honor of the first day back for kids in this state anyway, you’re about to get ‘schooled’. Today’s sad attempts at making a breakfast cereal TV commercial have got nothing on those downright F’ed up versions from the past few decades. In fact, it seems almost as if the creative driving force behind cereal ad campaigns has just turned on its heels and fled. Look, what I’m trying to say is you are about to witness thirty of what could be considered the finest collection of historically insane cereal ads from the late 50’s all the way up to the 90’s: Forty years of what it used to mean to shill your box of breakfast fare. So, sit back, grab a bowl of Maypo, and relive the horror.

Crispy Critters and the Orange Moose

Back before we even got the giant Crispy Critter who looked and sounded like Jimmy Durante, we had these guys. And apparently the elusive and… delicious? Orange Elephant. Sounds awesome.

Is there anything finer than degrading and stereotyping and entire nation for the sake of a damn cereal commercial commercial? No, no there isn’t.

Speaking of what I just said, here it is again! Not quite identical but certainly just as effective: make the Hawaiians and Pacific Islanders look like complete tools. Way to go!

When it comes to the Monster Cereals, everyone has their favorite and rarely do they deviate by eating another. Sadly, around here, the Monsters only really make store appearances during Halloween. Worse yet, poor Fruit Brute here has been retired to that big cereal box in the sky.

Yes, Boo Berry is still around as one of the remaining Big Three Monster Cereals. But that’s not why I included this ad. I included this ad because it’s just so awesomely odd and totally reminiscent of 50’s horror flicks. In a way…

Remember when the entire point of advertising children’s cereals was to point out the fact that it contained and/or was coated with tons and tons of sugar? Yeah, me too. Definitely taboo now though for sure.

Way back in the day, there used to be a cartoon called Twinkles the Elephant during Howdy Doody. And hey, what better way to promote a new cereal featuring twinkly stars of oats and corn? Yeah, you got it.

No, stupid. Doing math, even with a free cardboard ‘calculator’ isn’t fun. At all.

Cruncharoos were kind of like the ‘foreign’ version of Cheerios but with a crunchy coating. Also, Crunchasaurus Rex is right up there in the pantheon of kick-ass fake dinosaurs like Purplesaurus Rex and Cheeseasaurus Rex. Awesome.

Aiming a cereal a kids’ interests isn’t all that difficult. Throw a few ‘Super’, ‘Golden’, or ‘Frosted’ in there and you have a hit. Conversely, naming anything Maltex that isn’t a medication or a prescription of erectile dysfunction is just stupid. Especially when it’s cereal.

Whoa… this kid does not need more sugar. Or bananas for that matter.

Here’s a winning combination: the nearly impossible to understand Muppet, the Swedish Chef, and an ad about whipping up some cereal in his kitchen… with a tire pump. Oh yeah, I remember these.

Grins and Smiles and Giggles and Laughs

The box reminded me of some kind of bizarre Beatles animated flick with it’s odd artwork and crazy colors. The commercial was just kinda creepy.

That whale’s got it bad for the Cap’n. Oh well, any port in a storm, right?

This ad featured a veritable TV show’s worth of animated characters that never went on to do anything else. Seemed kind of a waste to use them to promote a cereal that was
just round and not made of the shapes representing the characters themselves. That would have been cool.

There have been a lot of different donut-style cereals over the years, but I’m pretty sure these were the first. I never understood the appeal of cereal that tasted like donuts. Why not just get donuts…

“Get along little Blueberry critters, get along!” Now that’s a theme I can stand by. Also, did that horse have a Native American’s hair style or is it just me?

Ah the epic battle between Baron Von Redberry and Sir Grapefellow… wait, was that a grape-flavored cereal? (sounds of pounding footsteps and bathroom door slamming) *HURGLE!*

Not just Frosty O’s, but SUGARED Frosty O’s. And don’t you forget it.

Wait, did that kid just say that Sugar Jets were real food? As opposed to what, exactly? A box full of pine cones and tooth picks?

See, now that’s creativity. This ad appeared in the 90’s and the cereal attempted to cash in on the whole cookies for breakfast bit. In this case it was sugar cookies with little Jimmies. And they ‘spangled every angle’ with sprinkles. Outstanding.

Alright first of all what was with that terrible non sequitur about space men? And did people just not know how to pronounce protein back then – what’s a pro-tee-en? And lastly, Cripsy? Really? Oh Yogi, now you’re just being silly.

Yes, I had a stuffed Chicken Wolf Moose Pig, why?

The general consensus says that the little girl at the end is none other than Jodie Foster. I wonder if Dr. Lecter’s seen this.

Well, as racially discriminate commercials go, I guess this one isn’t as bad. Who am I kidding, it’s almost uncomfortable to watch. It reminds me of Eric Idle’s Native American from Monty Python.

Another one of the numerous Cap’n Crunch variations, this time tasting like fruit punch. So, what, like Fruit Loops?

I’m not too sure where this poor kid lives, but where ever it is, his parents and adult family members sure get their jollies keeping the Maypo away from his famished lips. Kid needs to start kickin’ ass.