30 Reasons Why Raiders of the Lost Ark Kicks Ass 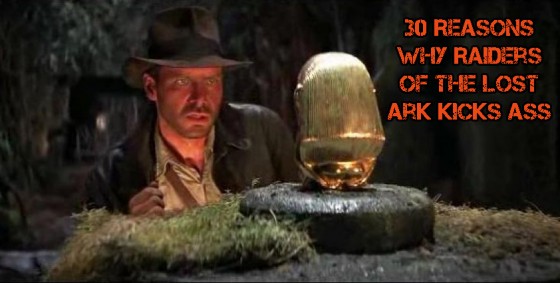 June 12th marks the 30th anniversary of Steven Spielberg’s epic action flick Raiders of the Lost Ark. I still recall as a wee lad sitting in the theater with my bucket of buttery popcorn staring googly eyed at the screen as Indiana Jones foiled those nasty Nazis for two hours. It remains to this day one of my favorite movie viewing experiences and that’s saying a lot because I’ve seen an assload of films throughout the years. But enough of my palaver. From beginning to end, here are 30 reasons why Raiders kicks ass.

You know who I’m talking about — the guy who flees like a little girl after he uncovers the statue. For some strange reason, his garish multicolored cap always stuck with me. Call it Rastafarian meets hipster. Evidently the loud patterns and colors are authentic to the Quechua Indians of Peru. It’s all in the details, folks. 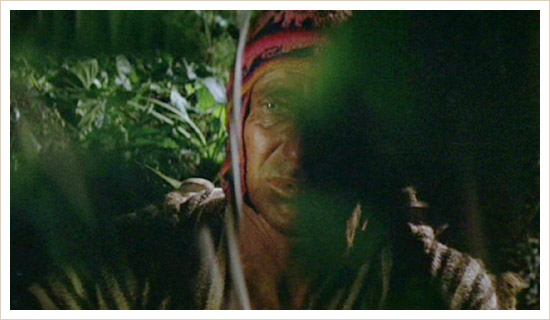 The sounds of the jungle

This might not seem like a big deal, but I’ve seen my share of movie jungle scenes with no animal sounds. Drives me bonkers. In a remote South American rainforest you’re gonna hear the indigenous fauna making a racket. The opening credits sequence is chock-full of birds, insects, monkeys and all matter of hidden creatures wailing. Again, it’s details like this that make Raiders so damn good. 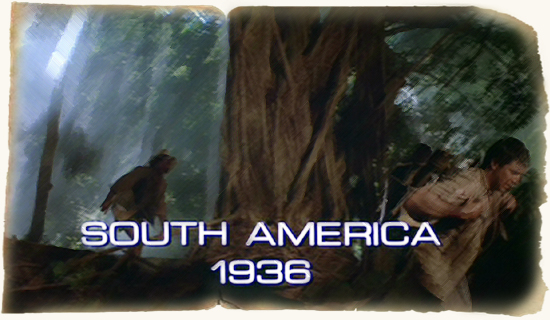 The first crack of Indy’s whip

Stupid Barranca should’ve known better than to draw down on Indy. Jones wastes little time in disarming the treacherous fool in the coolest way possible: with a quick lash from his signature bullwhip. It’s our first glimpse of the weapon that will define cinema’s most badass archaeologist.

When Indy sticks his hand in the blue light and Forrestal’s skeletal corpse appears, Satipo, played by the great Alfred Molina, unleashes a “I Just shat myself” yelp for the ages. Cowardly as it may have been, Satipo was right to be frightened, considering how he meets his maker. 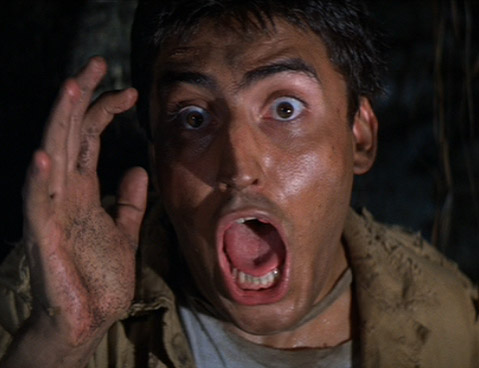 This creepy hunk of gold depicts the Chachapoyan goddess of fertility and childbirth. Note the heaving bosom and baby peeking its head from between her legs. The gritting of teeth probably signifies the pain of childbirth, or it could be she’s just trying to look menacing. Either way, it kicks ass. 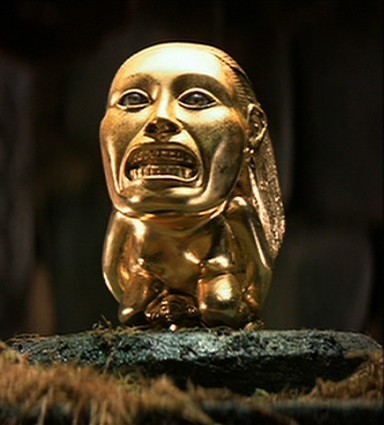 Poor Satipo. All he wanted to do was betray Indy and sell the Idol on the black market. Ah, the best laid plans. He was warned to stay out of the light. In his haste to exit the cavern, he must have forgot. Oops. A spike through the head and throat is a real ouchy. “A dios le pido.” 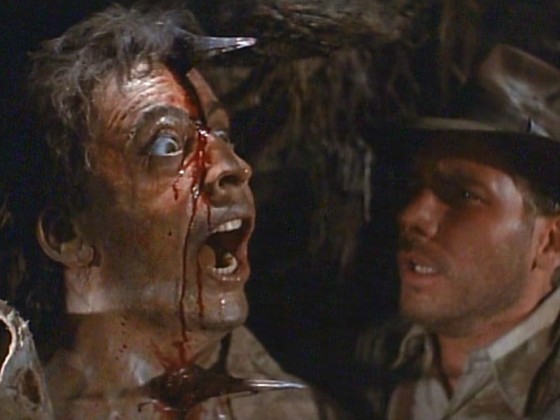 Think of all the action flicks you’ve seen in the last thirty years that feature someone running from a fireball, wall of water or similar such calamity. They can all be traced back to this iconic scene. At the end of the day, it takes more than a massive stone ball to foil Indiana Jones.

Brilliant decision to make the primary villain a Frenchman. Belloq oozes douche. He’s always one step ahead and has no problem rubbing it in Indy’s face. Indy does the dirty work, while Belloq reaps the benefits. Kudos to actor Paul Freeman for portraying an arrogant ass to perfection. 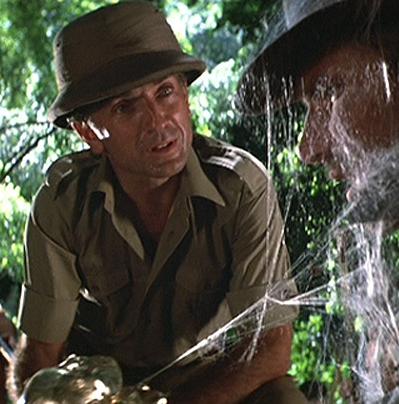 Jock is a Yankees fan

Nowadays it’s commonplace, and in some locales fashionable, to see people sporting a Yankees cap. But in 1936, while fishing in a South American river? Jock was a man ahead of his time. By the way, the Bronx Bombers finished 102-51 in ’36 and won the World Series, in case you were wondering.

I’d like to think good ol’ Indy was using his rugged good looks and big brain to bag all kinds of college hotties. In reality, he probably wasn’t due to his obsession with collecting rare antiquities. However, that didn’t stop the girls from gushing over their handsome professor, or writing not-so subtle advances on their eyelids.

As far as drinking establishments go, Marion’s bar, The Raven, has to be one of the coolest in big screen history. Location is key in business and being situated in the mountains of Nepal, I’m guessing competitors were few. Sadly, it went up in flames thanks to the nefarious Nazis. Something tells me Marion didn’t have fire insurance.

The shadow of Indy

The larger than life shadow cast by Indiana Jones on the back wall of The Raven ranks as one of the more inventive shots in a movie rife with outstanding cinematography. It also serves as a harbinger of doom for Marion. Where Indy goes, trouble is never far behind.

The hiss of burning flesh

More Major Toht. Eager beaver that he was, when Toht spotted the medallion he was tasked to fetch lying on the floor, he did what anyone would: he grabbed it with his greasy hand. Then he proceeded to do the “feelin’ hot, hot, hot” dance as the flesh on his palm sizzled like an Applebee’s entree.

The outcome of this scintillating showdown always gets a laugh, but I find the ‘I don’t have time for this shit’ look on Indy’s face absolutely hilarious. Harrison Ford, I bow to you.

“Please, sit down before you fall down.” That’s Frenchy being a jerk, again. Indy is mourning the alleged death of Marion by drinking himself silly. Does Belloq care? Not in the least. He’s got pointed barbs to fire and Indy makes for an easy target. Did I mention Belloq is a dickhead?

As Indy positions the headpiece in its proper spot, the sun rises into frame, John Williams’ dynamite score crescendos, and a blazing beam of light explodes, revealing the location of the Well of Souls. In a word: spectacular.

Staring at the sun

More cinematography goodness. I realize sunset shots are a dime a dozen in movies, but this one looks too amazing not to single out. It comes at almost the exact halfway point in the film and acts as a fitting transition to a second half packed with nonstop thrills and spills.

John Rhys-Davies’ Sallah provides several moments of comedic relief. My favorite comes after the lid to the Well of Souls is lifted. As Sallah peers into the darkness, a giant snarling Egyptian statue stares back causing him to bellow like a little girl. “Sorry, Indy.”

A chamber filled with deadly venomous serpents. Can it get any more disturbing? I think not. I still get the willies watching these scenes.

10;
Marion in a white dress

I always thought Marion was sexy in a tomboyish sort of way. Then she slipped into Frenchy’s white dress and sealed the deal. She, or rather Karen Allen, was very doable. 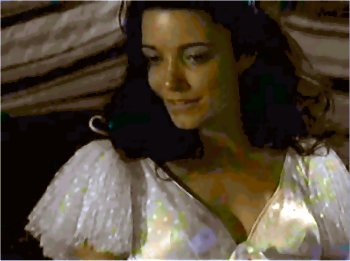 This chrome-domed German couldn’t wait to engage in a little pugilism. He genuinely enjoys smashing Indy with his fists and delivers our fedora-wearing hero a vicious beating. Alas, Mr. Clean was heavy on brawn, but light on brains. A propeller to the mug has gotta hurt. 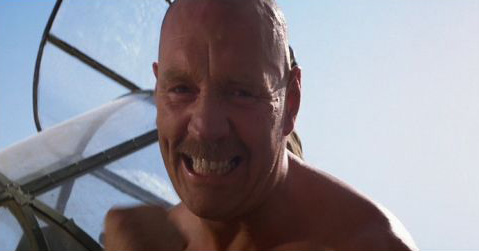 There’s something about a chick shooting a machine gun. When she’s not drinking dudes under the table or clubbing fellas with frying pans, Marion loves mowing down Germans with a swarm of hot lead. Yeah! 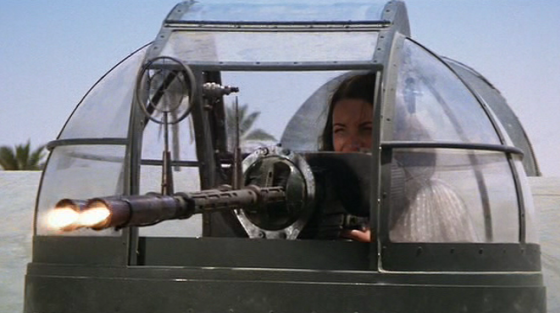 Channeling his inner Lone Ranger, Indy jumps aboard a white steed to chase down the Nazi convoy. In a film that combines action, horror and supernatural elements, there’s always room for a western theme. Another clever stroke from screenwriter Lawrence Kasdan.

Indy’s truck cab fight with the balding German officer is a beauty. Especially when the latter slams a couple punches into Indy’s bullet-grazed arm. Getting shot is painful enough without having some Aryan asshole driving his fist into the wound. That’s hardcore.

I’ll admit, the WTF slide beneath the moving truck is totally implausible. However, in the context of the movie it makes complete sense. More importantly it kicks major ass. Indiana Jones laughs at danger, and realism.

Marion is a good egg because she gives Indy the ultimate reward for bravery. Sex. Dressed in a silky nightgown, she kisses all his hurt away. A happy ending to a hard day’s work.

The hidden submarine pen is befitting one utilized by a Jame Bond villain. I’m still waiting for Dr. No or Karl Stromberg to make a cameo. Trivia time! The structure used in the film is the real WW II era submarine base located in the La Pallice harbor in France.

The Ark’s inhabitants were none too pleased with the thieving Belloq and his Jew-hating Nazi pals. Safe to say, the wrath of God shows no mercy. The graphic special effects manage to hold up pretty well by today’s standards.

Drawing inspiration from Orson Welles’ Citizen Kane, the last shot of Raiders shows the Ark being wheeled into a colossal government warehouse — lost in a sea of bureaucracy never to be seen again. Fin. 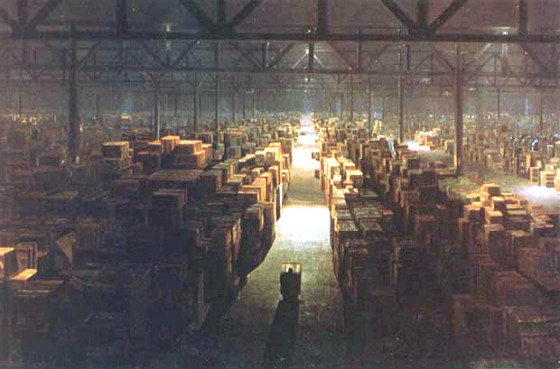