Sports > Other > Four Insane Tribal Sports You May Want To Try

Four Insane Tribal Sports You May Want To Try 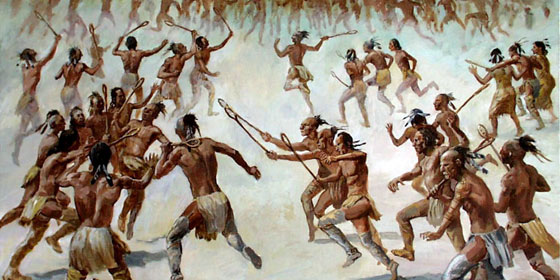 As children, we dream of becoming a superstar in a sporting discipline. We all have our reasons for the dream; we may crave the fame, the fortune, the hopes of becoming a legend, or just because we know it will bring us home a lot more women. But there is no doubt that some of us struggle to find a sport that suits us, as we taste the dog turd that has somehow found its way onto the school pitch, commemorating our sixteenth straight sack. So if that is you than how about hanging up that urine soaked jockstrap and trying out a different sport, a tribal sport that maybe not many are familiar with, giving yourself more of a chance. We all know Lacrosse started as a tribal sports, but how about trying… 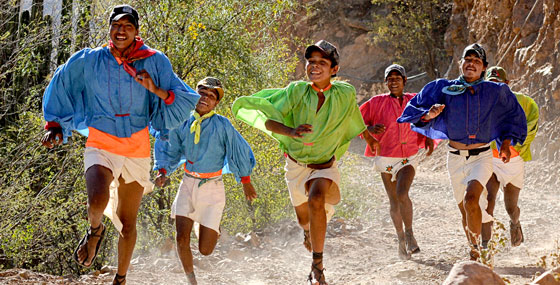 Running extreme distances is usually quite a lonely discipline, you generally have to keep your mind on other things, such as how you intend to execute your plan to make Megan Fox lick your face and how to become more economically sound when doing your weekly shop. Based in Mexico, the runners of the Tarahumara (though they refer to themselves as the Raramuri) tribe do not need to worry about these things though, for their event, Rarajipari, is ran in teams from three all the way up to ten men. This is because this foot race of 150-miles which must already seem like listening to Fidel Castro’s 32 hour speech in reverse with a chaffing rash spreading on your body, also requires immense teamwork.

Castro was a boy when he started the speech.

The extra challenge is that each team has to dribble a small wooden ball across the entire shit laden, barely signposted terrain. If it storms, they brave it. If its dark, other team members light torches. This is a race that can take up to two days. The wooden ball is about the size of a baseball, though that is not necessarily important since kicking anything wooden, regardless of size will eventually begin to hollow out your toes. Luckily, the Tarahumara tribe have appropriate footwear…oh….wait…they don’t. The Tarahumara opt for a pair of comfy homemade sandals and if they don’t work out, perhaps due to blisters, then straight-up barefoot running is dandy. But the Tarahumara run differently to us, they run as we are meant to run, on our tip-toes. By avoiding the impacts on their heels, they avoid the shock rising to their knees, instantly giving an advantage over most sport trainer wearing muscleman. 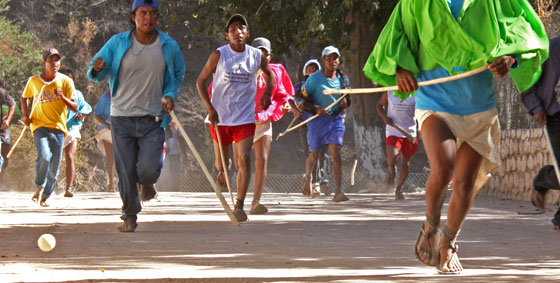 So what is the Tarahumara’s secret? Couch potatoes rejoice! For the Tarahumara’s preparation is predominantly consisted of drugs and corn-based alcohol but sadly no sex. Sex with the Tarahumara women before the race is banned so in their place they mix some dried bats blood with the tobacco and smoke it all down to instantly gain that special spinach Popeye edge. As with seemingly all tribes, there is a medicine man supporting the teams by mixing good potions and bad potions out of his own excrement (maybe). Possibly the most bizarre thing the medicine man does is to dig up a dead person’s shin bone, and after crushing it, he will proceed to drop the pieces of the bone across the track. We are taking a guess he doesn’t walk the whole track, instead getting a bit pissed with it all and heading back after a couple of miles.

The Tarahumara also stand up pretty well to runners across the globe as runners of the Leadville Trail 100 (A 100-mile race through the Rocky Mountains) found in 1992. Some of the participating Tarahumara did try out some professional cross-trainer shoes but only for a few hours before switching back to those speedy sandals which soon saw Victoriano Churro, a 55-year old farmer whose shin bone would probably be crushed and spread over a track in future, cross the finish line ahead of everyone else. 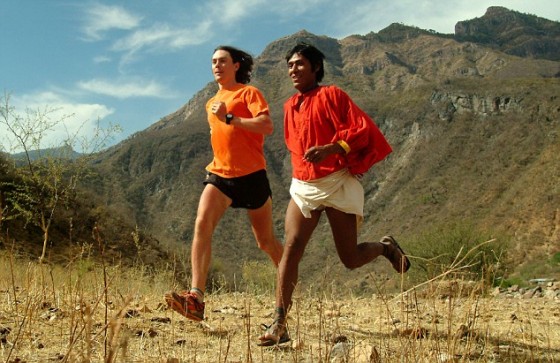 Should’ve smoked the bats blood pal, I’ll see you at the finish line…

So how do you stop these unstoppable wooden ball, dribbling machines? Apparently they never stop because of exhaustion, only through fear. So next time you are challenged to race a Tarahumara tribe member, whip out the “Scream” mask and watch them jog off to the nearest medicine man for some much needed excrement (maybe) to ward off the evil spirits. 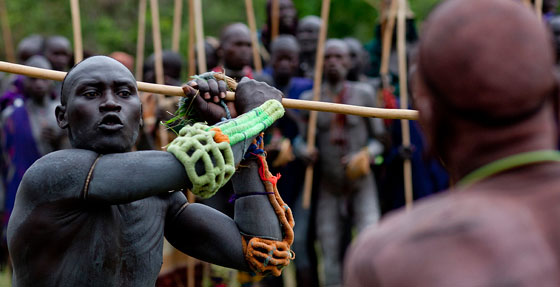 Do you remember the good old days when you and your fellow nerdy pal would go at it against each other in the garden, imitating Luke Skywalker and Darth Vader light saber fights? Well this is similar to what the people of the Surma, a collective name for the tribes of Suri, Mursa and Me’en based in Ethiopia, get up to. The only differences are their play fighting is more like actual fighting that occasionally results in death and their mock light sabers are eight foot long, hard wooden sticks called “Donga”. 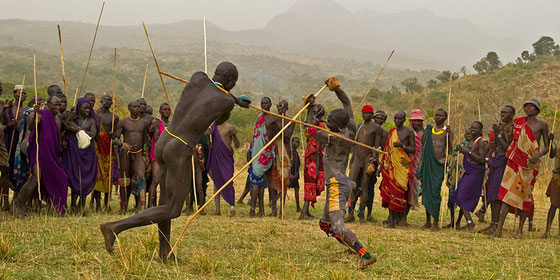 The fight is essentially a duel between two males which historically was used as a means for a man to prove his worth to the women of the tribe, however nowadays, probably because women are now looking for a more sophisticated man who can cook a good goulash, the fighting is often more based around the male bravado and the need to school the young ones in the art of war. 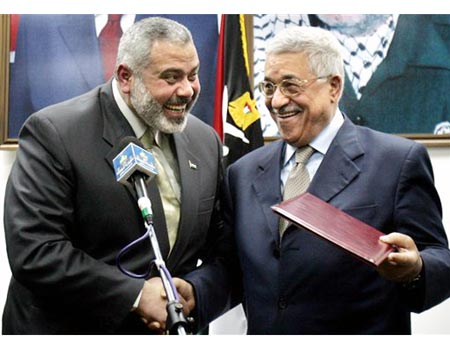 My donga is totally bigger than yours…

The contests are usually held between the various villages with the aim being for the two duellists to draw blood from the head or the feet, a long way from Gladiators such as Laser and Ice hitting each other in the naughty parts with foam batons. The battles are refereed and it is quite common in the fights for them to end in a draw or someone breaking the rules. What is frightening though it is just as common for an opponent to die from a blow to the stomach which would be a complete waste of a digested goulash. The optical illusion on the man’s body will hopefully mesmerize his opponent.

Recently, the competitions have degenerated with many of the crowds bringing their own methods to make sure who they bet on wins. The methods mainly fall under one category, guns, lots of guns. Having seen numerous John Woo films, the participants all pull out their guns and fall into Mexican standoffs, uttering witty one-liners. This new method of fighting clearly makes it difficult for a fledgling stick-fighter build a reputation for himself as it won’t be too long before his “Donga” is split in two by a bullet. 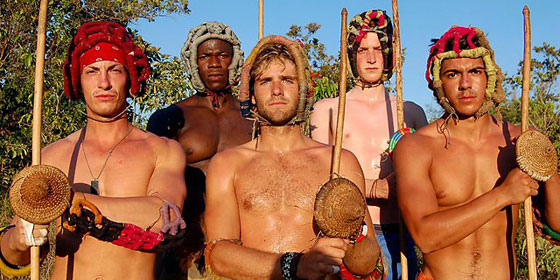 This is what it would look like if YOU tried it. 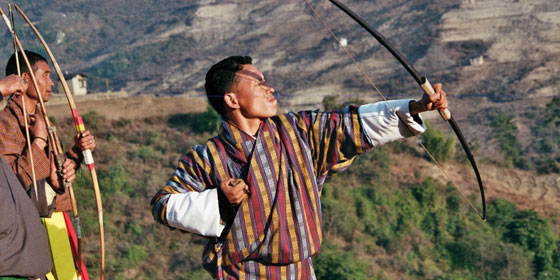 Back in World War 1, pilots used to take pot shots at each other with their pistols in the wide open sky. There never usually was a victor and if there was you can bet that they were called “Lucky Larry“ or “Hotshot Harry” . The chances of hitting each others planes were obviously worse than your chances with that coffee shop girl who you always envisage massaging the coffee beans on her body before grinding them.

This is pretty similar to our next tribal sport, Bhutan Archery. Played between rival village teams, the difficulty here lies in the fact that the targets you are meant to hit are three times further away than the Olympic standard and don’t necessarily sit on the same elevation. Unfortunately for the competitors, sniper rifles and binoculars are not used, instead the majority of the contestants shun even the better calibrated bows for their traditional hand-carved bamboo bows, which is quite a brave choice unless you’ve been practicing a lot of archery on your Wii.

The six represents how many times he has hit the target in his lifetime.

The difficulty takes an extra rise as you will also have someone who seemingly wants to compete in the next gurning championships, bouncing about mocking you as you take your shot. This is because the competitors of the other village are allowed incredible amounts of freedom to put you off you’re A-game, yes they can hold up beers or boobs. Or both… 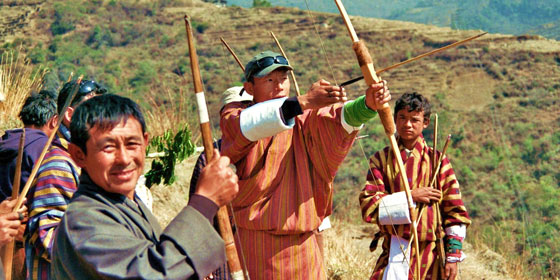 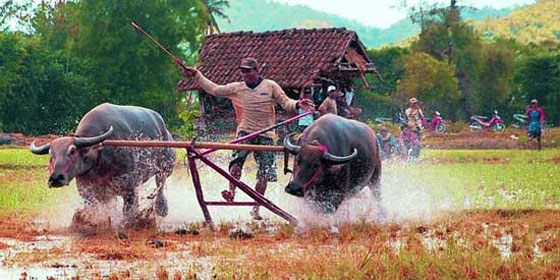 The basic requirements for Sumbawan buffalo racing are somewhat specialized. First, of course, you need a bunch of water buffaloes, because how else are you going to race? The arena is a waterlogged paddy field. Pairs of buffaloes are harnessed to a rickety wooden sled upon which a young farmer will stand for the duration of the race, steering and whipping the animals as they galumph through the knee-deep muddy water. It’s far more civil than Bull Fighting, because you don’t kill the Buffalo at the end, although they’ll wish they were dead.

That actual course is quite small, but the challenge itself is still as hard as giving yourself a bit of self-pleasure when you know your Mum’s on her way up the stairs with milk and cookies. The course involves a jump followed by the difficulty of being able to steer your frame into a small magically charged doll at the end of the course. If you manage to make it to the end and miss the doll, people will care about you as much as they care about their friend’s septic bunion. To record a time, you must hit the doll, and considering the width of the course, any deviation from a straight line probably means game over. 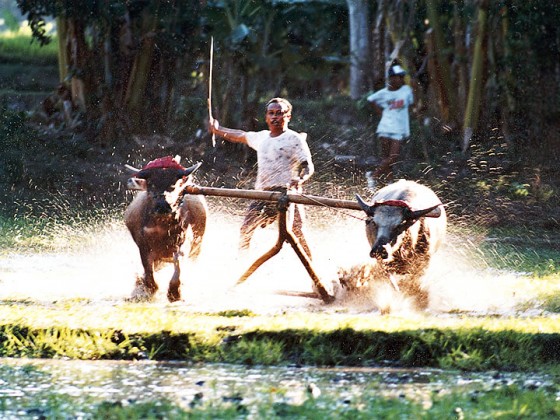 Traditional blessings and rituals all take place in the run up to the tournament but it’s the care and nurture of the buffalo that could be crucial to success. Cue the over the top montages of you and your buffalo rolling around in a pool of mud and running gaily through the fields. With all this said, the buffalo are likely to forget all this on race day and just collapse into the jump. 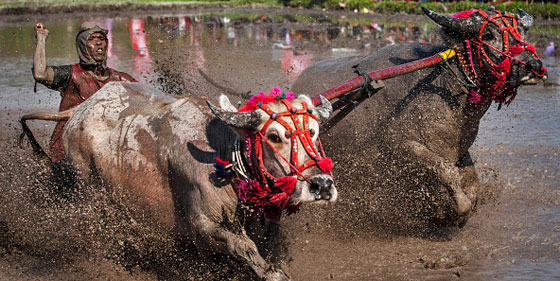 Five of the Greatest Ever NFL Teams