This NFL season has been somewhat unpredictable. Who would have thought the Tennessee Titans would be as good as they are and get yanked out of the playoffs by purple toting Baltimore Ravens? Who would think Tom Brady would suffer a season-ending injury, yet the Patriots with backup QB Matt Cassel remained in the playoff hunt (Bledsoe’d anyone?)? Then what about former Arizona Cardinals’ grocery stock boy, Kurt Warner getting voted to the Pro-Bowl as the starter?

Then there are the teams that have held true to their pre-season predictions. What if these losing teams could get the running backs they had in Nintendo’s 1991 smash hit: Tecmo Super Bowl? Would their season records turn out differently? I take the opportunity to play hours of Tecmo Super Bowl so I can figure out how these game changing RB’s would affect the fate of their teams today. 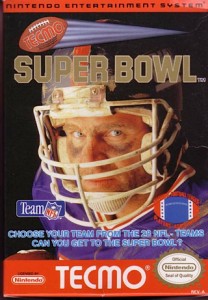 If you’ve never played Nintendo’s Tecmo Super Bowl, then you missed out on what was the best football game of its time. The simplicity of the play calling is what made it so great. There weren’t pages of X’s and O’s that you had to swim through to figure out which play to call or what defensive package you wanted out on the field like Madden NFL. Offensively, you had 4 running plays and 4 passing plays. Defensively, you had a 1 out of 8 (12.5%) chance at guessing what offensive play your opponent would choose. If you guessed correctly, you’d be rewarded with an all-out defensive blitz that left your opponent with zero chance of getting the play off the ground.

Not only were the plays easy to choose, there were two buttons on the controller, ‘a’ and ‘b’. You could figure out what button did what without ever reading the manual or learning complicated button combinations. You could do a quick play against your friend or the computer or you could choose to play a season’s worth of games and monitor how you’re doing by looking at the cumulative stats. Graphics were simplistic and it made the game play quick. Who needs to see all the drawn out dramatic scenes in Madden NFL when someone makes a sack or touchdown? Half-time shows in Tecmo Super Bowl consisted of short clips of some hot 8-bit digitized cheerleaders like the one below. Who can beat that kind of original awesomeness? 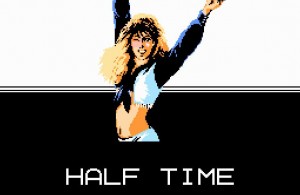 Why They Need Help: The Lions finished dead last in their NFC North division and, for that matter, all of the NFL. The Lions also have the distinguished honor of becoming the first team in NFL history to finish with an 0-16 record. The Lions took immediate action and fired coach Rod Marinelli as a result of the team’s lackluster performance, but what if they had running back Barry Sanders? Would Rod Marinelli’s Lions be just as horrible?

Career Profile: In 1990, Barry Sanders topped all other NFL RB’s by pounding out 1,304 yards on the ground and adding another 480 yds with 36 receptions for a total of 16 touchdowns. Though not big by NFL standards at 5’8″, Sanders capitalized on his size by running low to the ground and making himself less of a target for would-be tacklers. His ninja-like elusiveness and ability to reverse direction seemingly at will (and often required to do so because would-be tacklers broke through the line), would leave defensive players grasping at air. Sanders wasn’t a great blocker and didn’t catch many passes out of the backfield, but no one could deny the fact that he was a running machine.

Tecmo Super Bowl Profile: Barry Sanders hits the hole hard and fast. When controlling Barry, the slightest touch to the directional pad caused a defender to dive in the wrong direction and you’d end up with big runs. The only problem with Barry is his weak receiving ability. Throw a ball to him while he’s wide open and he’d find a way to drop it. 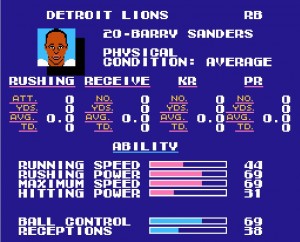 How He Would Help: Barry Sanders would clearly revive Detroit’s running game. The Lions ranked 30th out of 32 teams in rushing offense. Even behind a mediocre front line, Barry would find ways to hurdle, spin-move or stiff-arm some jerk in the face for a big run. It’s NFL Hall of Famer RB Barry Sanders we’re talking about here!

Why They Need Help: The Oakland Raiders ended their season on the bottom half of the AFC West; the first time the team has not held the bottom spot since 2002. After a 1-3 start, Oakland Raiders Owner Al Davis fired Head Coach Lane Kiffin “for cause.” This is a team that’s desperate for someone to bring back the franchise glory and where as a fan, you’d be proud to wear your Raiders gear out on the streets.

Career Profile: Bo Jackson was known for being the original two-sport standout by playing NFL RB for the Los Angeles Raiders and MLB LF for the Kansas City Royals. Jackson was selected in the 7th round with the 183rd overall pick by the Raiders. Despite the fact that he would miss part of the NFL season due to MLB commitments, the second string RB behind Marcus Allen would still outrun his counterpart. In 1990, Jackson ran for a total of 698 yards in 10 games while Allen ran for 682 yards while playing in all 16 games.

Tecmo Super Bowl Profile: Bo is the best player in the game. Although an above average RB in his NFL career, the guy was unstoppable in Tecmo Super Bowl. He had crazy off-the-line speed, was sure-handed when given the ball and could free himself from opposing tacklers. When out in the open field, no one could tackle Jackson if you used the patented zig-zag running style to make tacklers dive and miss. When his physical condition was excellent, Jackson would be the Raider’s entire offense. 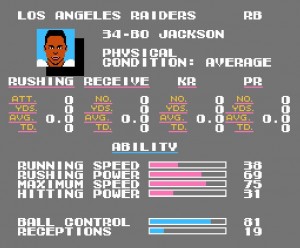 How He Would Help: Unfortunately for Bo, the Oakland Raiders are doing well with their rushing offense, ranking 10th overall. Where the Raiders are hurting is in their pass offense, ranking dead last in the league. Unfortunately for Bo again is that he stunk at receptions. Look at his player rating for receptions – a very low 19 points. I don’t know if Bo was ever offended by his receptions number like Redskin’s long snapper Ethan Albright over his player ranking in Madden NFL. Although the Raiders don’t need another RB, Bo could make the Raiders running game a bigger threat and shake up defensive packages to give their passing game a chance.

Why They Need Help: What looked like a promising season when the Bills started red hot at 4-0, turned into yet another predictable disappointment. The Bills managed to compile an embarassing 0-6 record when playing against teams in their own AFC East Division and have missed the playoffs for nine consecutive seasons. The Bills franchise has been run into the ground by their front office and have serious deficincies scattered throughout their offense and defense because of their owner’s unwillingness to spend the money to get quality players.

Career Profile: After playing at Oklahoma State University with teammate Barry Sanders, Thurman Thomas left as the school’s all time rushing leader for a career in the NFL. Selected in the second round by the Buffalo Bills in the 1988 draft, a mere 2 years later, Thomas was the AFC’s rushing leader and was only second in the NFL to Barry Sanders with his 1297 yards rushing and 532 yards receiving. Throughout his career, Thomas was known as a versatile running back who was a great runner and a great receiving option out of the backfield. In fact, Thomas finished his career as the second all-time leading receiver in Bills history with 4,341 yards. It also didn’t hurt that he played with the Bills when they had QB Jim Kelly and WR Andre Reed; creating a deadly offensive combination in the air and on the ground.

Tecmo Super Bowl Profile: Thurman Thomas is the best all-around running back in the game. He has good maximum speed so once he breaks through the hole, it’s hard for an opponent to catch up with him. Thomas is also a great option for as a second receiver when Andre Reed is covered up. When he has the ball, he is sure handed and won’t fumble the ball. 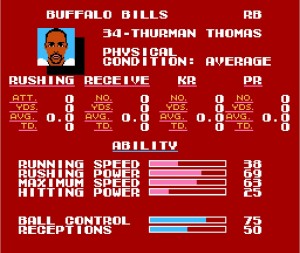 How He Would Help: The Bills finished the season ranking 22nd in passing yards and 14th overall in rushing yards per game. The stats aren’t bad but they aren’t great either. The Bills have reliable weapons in WR Lee Evans and RB Marshawn Lynch. However, neither player is a Pro-Bowl selection. With a versatile RB like Thurman Thomas, the Bills would have a more balanced passing and rushing offense that would make defense coordinators cringe when they had to choose what package to put out on the field to defend against Thomas; is he going to run it or will he be the third down check?

Why They Need Help: With President/General Manager Carl Peterson stepping down, the Kansas City’s front-office is a disaster. Kansas City has stated they intend to look for a dedicated president to run the business aspects of the organization and a GM to  handle the football operations. No more putting all of your eggs in one basket. KC is also saddled with personnel problems. Chiefs’ RB Larry Johnson has stated he wants out of KC because he feels the team has changed their offensive priorities and perennial Pro Bowler Tony Gonzalez has stated he only intends to play one more season before retiring; even shorter if he hears the organization mention the word “rebuild.” With so much turmoil in the organization, KC, a team that has been in the playoffs twice in the last ten years, is in desperate need of a face-lift.

Career Profile: Okoye played 6 seasons in the NFL (all with the Chiefs) before voluntarily retiring due to a nagging knee injury and because he was tired of practicing and perceived playing professional football as more of a job than something he was passionate about. He ended his career with 2 Pro Bowl appearances and a league rushing title in 1989 when he ran for a league best 1,480 yards. A native of Nigeria standing 6’1″ and weighing 260 lbs, Okoye had decent speed, but earned the nickname “The Nigerian Nightmare” because of his over-powering and bruising running style that punished defenders standing between him and the end zone.

Tecmo Super Bowl Profile: The creators of Tecmo Super Bowl took Okoye’s nickname, “The Nigerian Nightmare” to heart. When Okoye gets the ball and hits the hole at full speed, defenders literally bounce off of him because of his incredible hitting power rating. Even in open-field situations, it’s impossible to bring Okoye down in a one-on-one situation. What happens most of the time is he bulldozes you over and you’re left watching the pixelated player race down the field for an easy touchdown. Your only hope of stopping him is if two or more defenders get to him at the same time. Although there are other players in the game with similar hitting power as Okoye, they lack the above average speed Okoye runs with. Not known for having good hands in the NFL, Okoye is pretty lousy at holding onto the ball and lacks good receiving capability in the game. 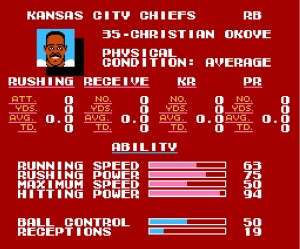 How He Would Help: With Larry Johnson most likely out the door, KC needs a RB. Who better to bring back the “wow factor” to the Chief’s rushing offense than Okoye and his menacing running style. Fans would cheer loud and hard every time Okoye stepped on a would-be tackler and would re-ignite the Chief’s disillusioned fan base.

Here’s a You Tube clip showing off some of the above mentioned running backs.

Want to re-live the Tecmo Super Bowl days? Gunaxin’s got your hookup on how to do exactly just that.

Grab the Nintendo Emulator and download the Tecmo Super Bowl ROM. Run the emulator and load the ROM.

Use the keyboard’s arrow keys for up–down–left–right.

That’s all you need to get playing. The 1990 season is waiting for you…