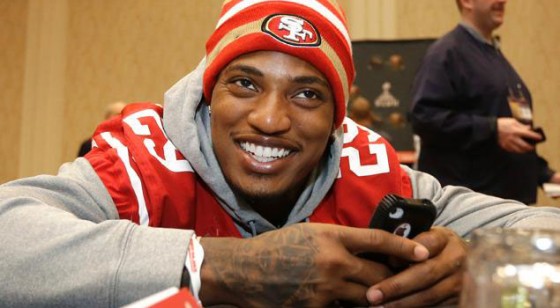 Ray Lewis has a new best friend. After dealing with the deer antler spray controversy for two days Lewis can thank 49ers’ cornerback Chris Culliver for stealing the Pre-Super Bowl media spotlight. Culliver made some ill-timed and insensitive comments to Artie Lange in a radio interview on Wednesday. When asked about potentially having a homosexual teammate Culliver didn’t seem too comfortable with the prospect.

There are NO GAYS in San Francisco!

Culliver is apparently as uncomfortable with the English language as he is with homosexuals. San Francisco drafted Culliver in the 3rd round of the 2011 NFL draft out of the University of South Carolina. I’m sure the Gamecocks’ alumni office is thrilled. I guess English 101 isn’t a requirement for a degree in sport and entertainment management from South Carolina.

Culliver’s comments no doubt went over like a lead balloon back in San Francisco, the land of Harvey Milk who was an openly gay politician and gay activist. The 49ers Public Relations department had Culliver issue a hastily formed apology that did little to quell the controversy.

As Lewis can thank Culliver for taking the heat the 49ers’ cornerback is now left to hope that someone else says something head-scratchingly stupid prior to Sunday’s Super Bowl. Maybe Dan Marino could have a child out of wedlock or something. Wait, he did?