Sports > Football > Why the 49ers Will Win Super Bowl XLVII

Why the 49ers Will Win Super Bowl XLVII 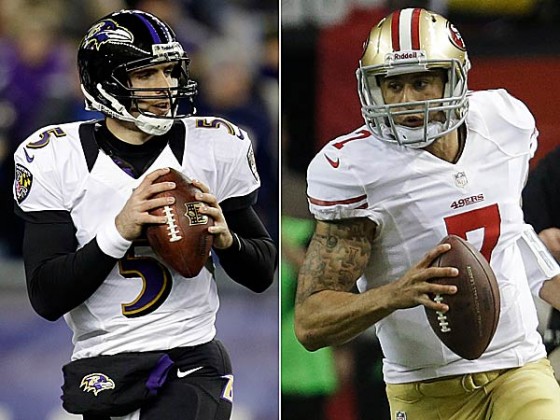 I’ve been known to wager on a game or two in my day. As such, I’m always looking for an edge. Ya know, some tidbit of knowledge to improve my odds of raking in the big bucks. Breaking down Xs and Os in excruciating detail is always a good place to start, but I prefer to use history to gain an advantage.

In the case of the Super Bowl XLVII matchup between the Ravens and 49ers, I’m focusing on the quarterbacks. However, rather than zero in on Joe Flacco’s deep ball or Colin Kaepernick’s mobility, I’m going to turn my attention to what they will be wearing. Specifically, the number on their jerseys.

In the previous 46 Super Bowls, the winning quarterbacks have donned one of 14 numbers on their uniforms. Here’s a list of the most common to least common worn number by the victors and the total titles won.

Note one number conspicuous by its absence: #5. The same number Joe Flacco wears. Only two quarterbacks dressed in #5 have reached the Super Bowl: Kerry Collins in 2000 with the Giants and Donovan McNabb in 2004 with the Eagles. Both walked away losers.

Meanwhile, #7 has done quite well for itself, thanks to Joe Theismann, John Elway and Ben Roethlisberger. On the down side, #7 has also been defeated seven times in the Big Game.

Incredibly, 31 of 46 championships have gone to signal-callers wearing 7, 8, 12 or 16. This bodes well not only for Colin Kaepernick on Sunday, but also Andrew Luck and whomever drafts Geno Smith, providing he retains #12 (and based on this, he’d be an idiot not to).

So, if Flacco hoists the Lombardi Trophy, he and his #5 jersey will make history. Speaking of history, it’s not on the side of Cam Newton, Matt Ryan and Jay Cutler. No quarterback wearing #1, #2 or #6 has reached the Super Bowl, let alone won it. A juicy stat for Panthers, Falcons and Bears fans to chew on during the long offseason.