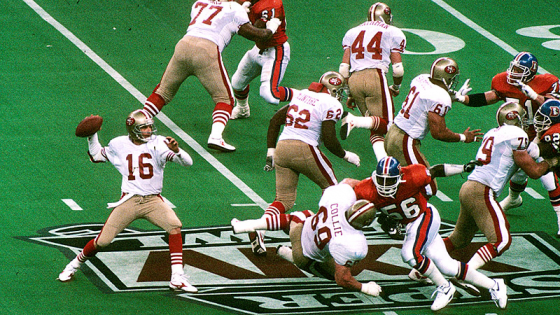 The Super Bowl ain’t what it used to be — in a good way. Lately, billions of viewers have been treated to some tightly-contested games. Five of the last six Super Bowls have been decided by six points or less.

Often in its past, though, the Big Game was a bit more anti-climactic — less thrilling than some of the conference playoff games leading up to it. There were literally eras when one opponent so outfavored the other, or one conference totally dominated the other, that the Super Bowl itself was just a bore.

But the most dominant run in Super Bowl history belongs to the NFC: Thirteen champions in a row between the 1984 and 1996 seasons. Four of the five biggest Super Bowl smackdowns took place during this period, with the fifth just the season before, helping make the decade between the mid-80s and mid-90s the era of the “Super Bowl Blowout.”

Quarterback Joe Theismann and running back John Riggins led the Redskins to their first Super Bowl championship in 1982 and 1983 was looking no different. The ‘Skins sported the No. 1 offense and best record (14-2) in the NFL. After earning a first-round bye, Washington trounced the L.A. Rams 51-7 in the Divisional Round.

They met the San Francisco 49ers in a classic NFC Championship. The Redskins took a 21-point lead into the fourth quarter only to see Joe Montana tie it up with three straight touchdowns. But with 40 ticks left, Washington kicker Mark Moseley – who had already missed four field goals in the game – put it through the uprights and sent the Skins to the Super Bowl with a 24-21 victory.

In the AFC, Al Davis and the Raiders were in the hunt for their third Vince Lombardi trophy. They finished 12-4 and started their postseason with a beatdown of the Pittsburgh Steelers, 38-10. Next, they slaughtered the Seattle Seahawks in the AFC Championship game, turning a 27-0 lead into a 30-14 win.

And so the stage was set for vengeance. In Week 5, the Redskins had defeated the Raiders in a nail-biting comeback 37-35. However, there would be no comeback on Super Bowl Sunday.

The Raiders jumped to a 21-3 lead in the first half, thanks to a blocked punt, a Jim Plunkett pass and a pick-six. Marcus Allen scored L.A.’s other two touchdowns and totaled 191 yards rushing, second-most in Super Bowl history. The Redskins managed a field goal and a missed extra point, and the Raiders claimed their third Super Bowl 38-9.

Four years later, the Redskins would redeem themselves. Once on the receiving end of the worst thrashing in Super Bowl history, Washington took a turn delivering one of their own.

John Elway and the Denver Broncos were looking to reverse things as well, having dropped the previous season’s Super Bowl to the New York Giants.

The Redskins earned a third-seed in the NFC mostly on the arm of Jay Schroeder, but head coach Joe Gibbs turned to veteran backup (and higher-rated) Doug Williams, who up to that point had started only two games for Washington.

Williams led the Redskins into Chicago and back from a 14-0 Bears lead to take the Division Round 21-17. He followed that up with another squeaker, taking the NFC title with a 17-10 win over the Minnesota Vikings. And with that, he became the first African-American quarterback to play in a Super Bowl.

Things looked equally tentative through the first quarter of Super Bowl XXII – Denver leapt ahead 10-0. But Williams would earn his MVP in the second quarter, throwing four touchdowns, and the Redskins never looked back, breaking the Broncos 42-10.

Where is Doug Williams today? He’s the head coach over at his alma mater, Grambling State, where he took the reins from Eddie Robinson, the all-time winningest coach in Division I history.

In 1992, the Buffalo Bills would reach the Super Bowl for a third consecutive season. They lost the previous two Bowls, first to the Giants and then to the Redskins. Unfortunately for the Bills, they’d run into yet another peaking NFC East team — one in the beginning days of a dynasty.

Troy Aikman arrived in Dallas in 1992. The No. 1 pick in the 1989 NFL Draft, Aikman went 0-11, and the Cowboys finished 1-15 his rookie year. The following season Dallas drafted Emmitt Smith and Aikman improved to 7-8. But the Cowboys failed to make the postseason a fifth year in a row. Finally, in 1991, Dallas won its last five games and snuck into the playoffs.

In 1992, the Cowboys took the NFC’s second seed, whupped the Philadelphia Eagles 34-10 in Round 1 of the playoffs and finished off the 49ers in San Francisco 30-20 to take the conference title and make it to their first Super Bowl since the days of Roger Staubach.

After dominating the AFC for two seasons, Jim Kelly, Thurman Thomas and the Buffalo Bills backed into the postseason in 1992 on the heels of a loss to the Houston Oilers. The two wild cards would meet again a week later in a thriller known as “The Comeback.”

With Kelly nursing a knee injury from that final game, perhaps the greatest comeback in playoff history would be orchestrated by backup quarterback Frank Reich. The Oilers took a 35-3 lead into the third quarter before Thomas, too, left with an injury. Reich and backup running back Kenneth Davis then scored five touchdowns in a row to give the Bills a 38-35 lead. They’d win in overtime, 41-38.

The Bills followed that up with two road wins: 24-3 over the Pittsburgh Steelers and 29-10 over the Miami Dolphins for the AFC title. By then, both Kelly and Thomas had returned to the lineup.

But the Super Bowl would be no contest. Not only did Aikman throw for four touchdowns on his way to the game’s MVP, but the defense forced five fumbles and four interceptions, the most total turnovers in Super Bowl history. The Cowboys roped the Bills by 35, 52-17.

These two teams would go on to give life to the saying “the thrill of victory, the agony of defeat.” Dallas winning two of three Bowls and Buffalo losing four in a row.

Arguably the most storied franchise in football history and winner of eight championships, the Chicago Bears had yet to appear in a Super Bowl by 1985. But Mike Ditka’s Bears were utterly dominant that season, finishing 15-1 with the best defense (by far) behind Mike Singletary, Richard Dent and William “The Refrigerator” Perry, and the best rushing offense behind Walter “Sweetness” Payton.

The Bears tore through the postseason and appeared destined, suffocating the New York Giants and the L.A. Rams with back-to-back shutouts (21-0, 24-0) en route to Super Bowl XX.

The New England Patriots, on the other hand, were a surprise. Led by relative no-names Tony Eason at quarterback and Craig James at running back, no one expected the Pats to even make the postseason.

They barely did, snagging the last wild card on a tiebreaker over the Broncos. But their road to the Super Bowl had just begun. Three road games against favorites lie ahead.

The Patriots grounded the Jets 26-14 in New York, raided the top-seeded Raiders in L.A. (27-20) and manhandled Dan Marino and the Dolphins in Miami, 31-14, to earn their first Super Bowl appearance, as well.

The Pats charmed season continued early in the Super Bowl when they drew first blood – a fumble that led to a field goal. But the Bears answered with eight straight scores, including two runs by quarterback Jim McMahon and another by Perry.

The Bears defense, one of the greatest of all time, held the Patriots to just seven yards rushing and 177 yards passing in the 46-10 drubbing.

In the four years before the Buffalo Bills lost four Super Bowls in a row, the Denver Broncos lost three, including this one – the biggest blowout in Super Bowl history and the only one won by more than 40 points.

Joe Montana and the San Francisco 49ers had a much more illustrious recent history as they were looking to repeat in 1989 and collect their fourth title of the decade.

The Niners were even more dominant in their title defense, posting the best record in the NFL by a full two games. They demolished the Minnesota Vikings 41-13 and L.A. Rams 30-3 in the first two rounds of the playoffs, foreshadowing of what was to come.

After losing Super Bowls following the 1986 and 1987 seasons, Denver suffered a hangover in 1988, going just 8-8 and missing the postseason all together. They bounced back in 1989, winning the top seed in a weak AFC with a record of 11-5.

The Broncos fended off the Steelers in the Division Round, taking the game 24-23 on a Mel Bratton rush with less than two-and-a-half minutes to play. In the AFC Championship, they never trailed, pummeling the Cleveland Browns 37-21. Maybe John Elway’s third time would be a charm?

Or not. Elway went 10 of 26 for 108 yards with two interceptions and a quarterback rating of 19.4. The Broncos as a team were held to exactly 200 yards. Meanwhile, Montana threw for 297 yards with five TDs (four to Jerry Rice) and no INTs. His rating was 147.6, second best in history. The Niners would run away with the Super Bowl’s biggest blowout 55-10.

Want more? Where does your team rank? Check out Sports List of the Day, where you can find the 20 Biggest Blowouts in Super Bowl History.