By Geoff Shakespeare on November 3rd, 2021 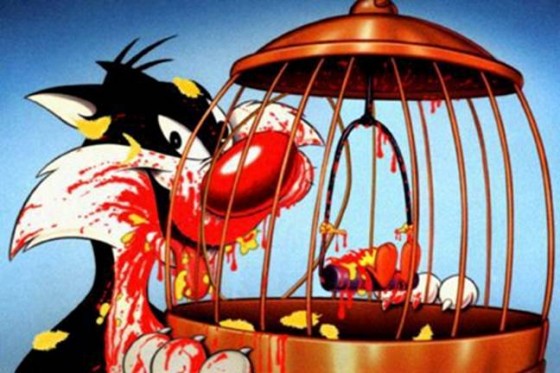 All of us, animated or not, need to eat. For cartoon characters, food is especially important. Without the nutrients that food provides, cartoon characters wouldn’t have the energy to fight bad guys, make jokes, solve mysteries, beat each other up, or enact any of their crazy schemes. After a long day of rapid one-liners, quick changes, and hare-brained plans, most cartoon characters can sit down and enjoy a well-prepared meal with friends. For them, food is a rare pleasure in a hostile world of falling anvils, archenemies, and portable holes. For others, it’s a multicolored nightmare. 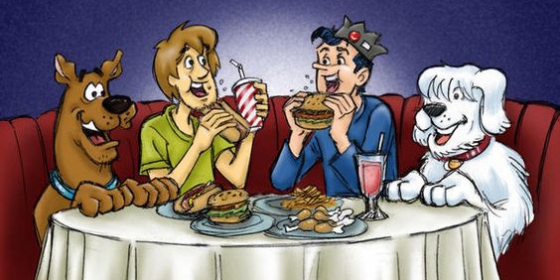 For all too many of our most cherished animated friends, food is the animated equivalent of 200 kilos of uncut Peruvian Flake. A terrible joy and a beautiful hell. Whether driven mad by cartoon physics or thrown into despair by backgrounds that never seem to change, these unlucky anthropomorphized animals and two-bit sidekicks turn to food to combat their looneytunian loneliness and Hannabarbarian dread. Locked into an endless cycle of binges, they shuffle across the celluloid, more animal than man- except when they are animals, in which case they are, we don’t know… more plant than animal? Anyway, it’s not good. These are the Five Cartoon Characters with Dangerous Addictions to Food. 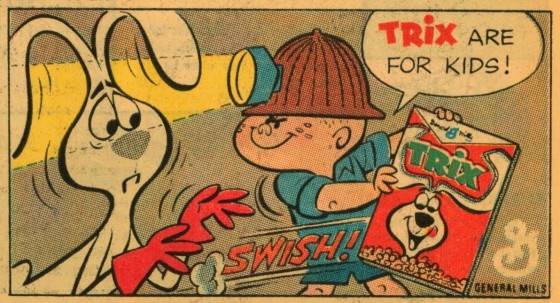 The Harrowing Tale Of Addiction: In many ways, The Trix Rabbit is the most tragic of all the food addicts in Cartoonland because he almost never scores. Since he first appeared on the scene in 1969, he’s had nothing but bad luck. Whether he loses his cool just before he cons someone out of a bowl, or those two asshole kids harsh his buzz, The Trix Rabbit just can’t seem to get his cereal on. He’s tried every trick in the book, worn every costume, jumped through every hoop, and he still can’t get a single spoonful of that primo fruit-flavored, sweetened, ground-corn shit.

The Trix Rabbit has scored a couple times as part of write-in campaigns. Kids across the land, tired of seeing the sad spectacle of a grown rabbit jonesing for cereal, voted overwhelmingly to end his 40 year bummer. But just like an unanimated addict, his pleasure was brief. He went right back to his life of begging, borrowing, and stealing just to get a little Trix, man. 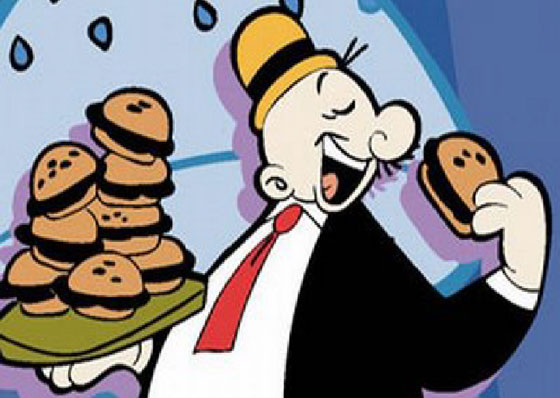 The Harrowing Tale Of Addiction: Even though his best friend Popeye loves to ‘juice’ with the spinach in his endless pursuit of freakishly large forearms, Wimpy is all about patties of beef on a bun. Wimpy needs his burgers. From the moment he wakes to the moment he drags his burger-filled belly home, Wimpy is on the make. Scheming, conning, and begging to get his hands on that sweet ground round. Moving from hamburger joint to hamburger joint, Wimpy is always one step ahead of the dealers, but one step behind his addiction. Life is hard on the streets for a hamburglar, but Wimpy out hamburgles them all. Except for that guy The Hamburglar. That baller is for real! 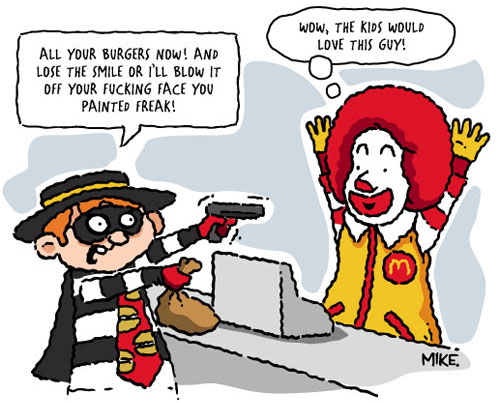 The Hardest OG in McDonaldland

Every fast food restaurant in the world has a guy like J. Wellington Wimpy. You know the type, broke, shifty, and looking at you with those big, scary eyes. Everything about him screams desperation. He’s always running some scam and doesn’t seem to notice that most people buy him a hamburger just to get him to go away. But Wimpy’s no idiot. He’s knows that sooner or later his burger habit is going to the death of him. Nobody wants to end up dead in a McDonald’s dumpster. Everyone’s heard his familiar refrain, “I’ll gladly pay you Tuesday for a hamburger today.” But if you look closely at his ketchup stained lips, you just might hear him whisper, “help me.” 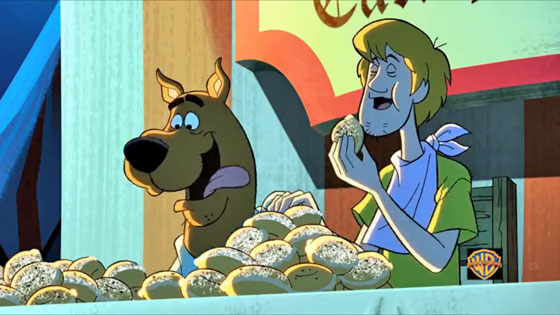 The Harrowing Tale Of Addiction: Before they hooked up with ascot enthusiast Fred, his ditzy girlfriend Daphne, and her lesbian admirer Velma, permanently stoned coward Shaggy and his wacked-out talking dog Scooby were perfectly content to sit on the couch, watch cartoons, and trip balls to their favorite mind-bending cookie, Scooby Snacks. They’d sit for hours eating Scooby Snack after Scooby Snack and not wonder why their favorite cookie was named after one of them. Then that prick Fred came along in his tricked-out boogie van.

My Name Is Fred And I Use Drugs To Control My Friends.

No one knows exactly why Shaggy and Scooby joined up with Fred and his gang of ghostbusters. First, they’re total pussies who are afraid of everything, not a quality usually needed for fighting supernatural creatures from beyond the grave. Secondly, they’re really, really lazy. Unless Fred lied in the interview, you’d think Scooby and Shaggy would avoid a job that entailed them constantly running, dressing up as various waiters, barbers, etc, and constantly being used as the bait in Fred’s elaborate ghost traps. Why would they go through all that? It wasn’t for the girls, because Daphne was taken and Velma wasn’t about to switch teams for some lanky dude with a soul-patch. No, Shaggy and Scooby submitted themselves to all that spooky humiliation again and again to get Scooby Snacks.

Fred held those things over their heads whenever they had second thoughts. Don’t want to search for a giant electrical ghost? How about a Scooby Snack? Don’t want to wait in a dark, cold room for hours while we lead the evil Black Knight right to you? How about a Scooby Snack? Whenever Fred needed Scooby and Shaggy to do something distasteful or dangerous, he’d take full advantage of their addiction and hook them up. Fred basically enables their addiction for his own selfish purposes and keeps them trapped in a cycle of dangerous, self-destructive behavior that will inevitably lead to either their deaths or incarceration. Zoinks! 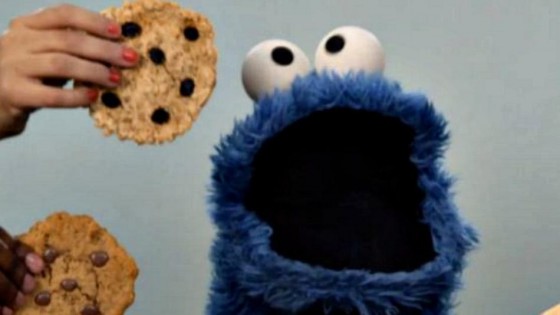 The Harrowing Tale Of Addiction: Few muppets are as utterly pathetic as The Cookie Monster. He may not technically be a cartoon, but he still can’t control his urges. Slobbering, arms flailing wildly, and barely capable of even putting together a simple sentence, The Cookie Monster is epitome of a late stage junkie. The Cookie Monster spends every day of his life looking for cookies and eating cookies. He’s so far gone he’ll even eat anything remotely cookie shaped if he can’t get his hands on a real one. Hell, the dude even ate an entire motorcycle once. Years of cookie abuse have left his eyes permanently googalized, his fur an unhealthy shade of blue, and his grammar Tarzan-level at best. “Me eat cookie!” he screams. But no one on Sesame Street has the courage to yell at him, “You go rehab!” 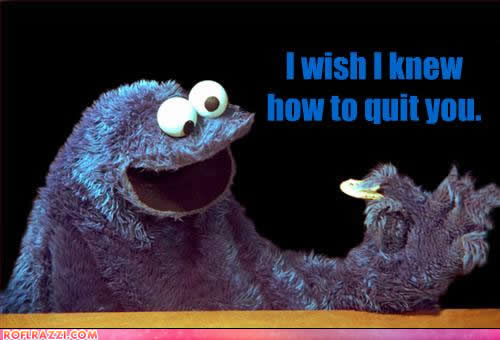 Because no one notice how bad Cookie Monster’s addiction is!

At least The Cookie Monster comes by his addiction honestly. Cookie’s father, mother, sister, and even his cousin are all food addicts. Cookie learned early that there was an unfillable void in the center of him that could only be filled by stuffing his face with any cookie he could get his shaking hands on. As his addiction progressed, everything else fell away. Things got so bad that he even forgot his real name. Years of shoving cookies down his mouth had driven him insane. This Cookie Man had finally become a Cookie Monster. 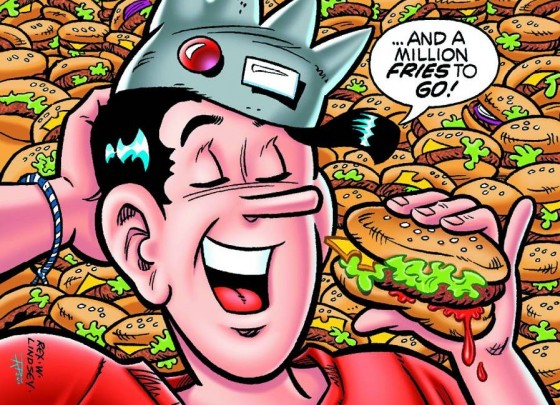 The Harrowing Tale Of Addiction: Jughead loves to eat. Blessed with a freakish metabolism, Jughead can eat massive amounts of food without gaining weight, and he doesn’t even have to throw up to do it! A classic overeater, Jughead downs burgers, pizzas, candies, and anything else at an astonishing rate. He’s an eating contest champion, a respected food critic, and has a sense of smell so refined he can tell what food is in a can without even reading the label. This kid knows his eats. He’s usually broke, but he always finds a way to cram more food down his gaping maw. Best of all, and unlike the other characters on this list, Jughead’s obsession with food doesn’t seem to really do much harm. Sure, it may be disgusting to sit next to him at McDonald’s, but besides naming his dog “Hot Dog” and wearing that stupid crown, Jughead has a pretty alright life. Except for girls. 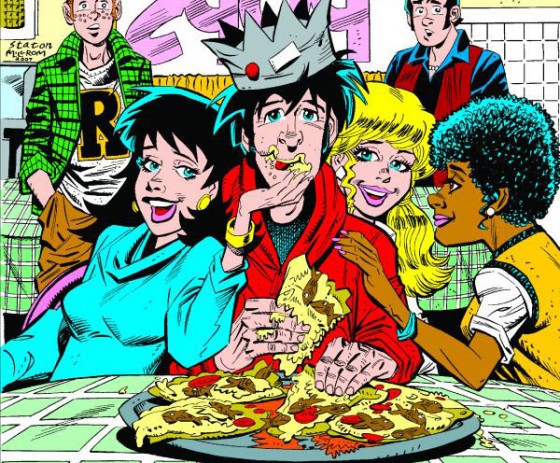 Unlike his hornier buddies Archie and Reggie, Jughead is entirely uninterested in girls. Sure, he’ll go on a date if it means he can eat, and he strings poor Big Ethel along because she’s a good cook, but the only thing that really turns him on is food. He always brushes it off by claiming to hate romance, and not girls, but come on! Presented with this evidence, most of us would just assume that Jughead’s a raging closet case who can’t accept his sexuality and uses food to comfort himself, but it isn’t the case. According to town brainiac Dilton, Jughead is killing himself with food because he’s nervous around girls. By constantly chowing down, Jughead can avoid talking to those strange and mysterious creatures. 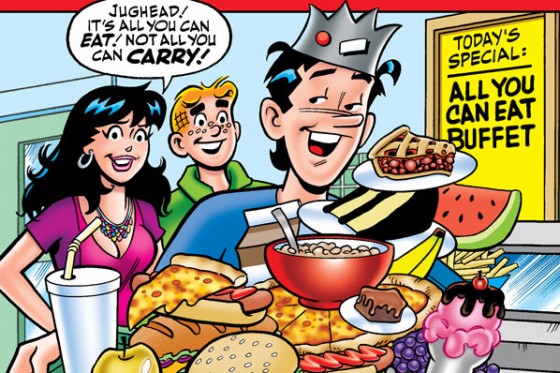 Now, if Archie was a true friend, he’d help his buddy work through his food issues so he could enjoy a healthy relationship with a girl. But Archie is a dick, and even though he has a hot blonde and a hotter, richer brunette, he still wants to keep all the Riverdale tail for himself. Meanwhile, Jughead is doomed to a lonely life of eating and jerking off to pizza delivery flyers.