Gadgets > Other > Five Government Gadgets Designed to Make You Paranoid

If there is one thing the Department of Defense does well, it’s spend money. With the Government currently under a shutdown, it’s important to realize that Defense has been prioritized as essential and they are on duty protecting you. As we’ve seen from the recent Edward Snowden leaks, protecting you can sometimes mean spying on you.

There is an entire mysterious part of government funding known as the ‘black budget’ – the secret projects fund that we aren’t really meant to know about, and only do because its hard for the Pentagon to just shrug and say they left all that money on a bus. So what do they spend it on? Boring shit like satellites and LSD filled whore houses mostly. The good news is they also make a bunch of cool toys with that funding which we sometimes get to see. The bad news is they also make a lot of gadgets that get to see us, no matter where we are or what we’re doing. Gadgets like: 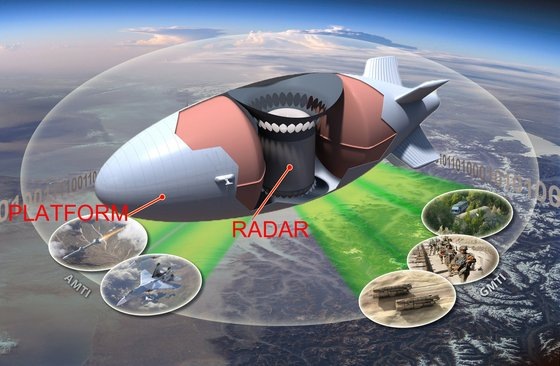 And what pray tell is that? Why, it’s a gigantic airship that is able to provide a:

“dynamic, detailed, real-time picture of all movement on or above the battlefield: friendly, neutral or enemy – a big picture map showing everything moving for hundreds of kilometers.“

So… Kind of like a giant CCTV camera, but capable of following your every move? Yes, but better. Much better. You see, its pretty hard to hide from the ISIS – even if you were to drive about 300km away, and park underneath a thick canopy of trees. It’s also pretty hard to spot it, as it floats silently at 70,000 feet.

In addition to all that, it features a “giant flexible radar antenna”, which sounds absolutely nothing like those tentacle things from War of the Worlds 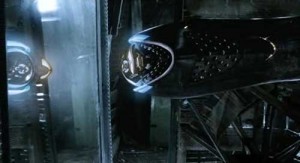 Absolutely in no way inspired by this 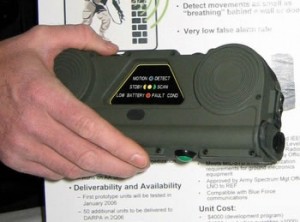 This handy little thing is the 21st century, high-tech, multi million dollar version of the trusty mirror-on-a-stick. No more will soldiers have to peer around corners or fear entering rooms! Just hold this against the wall (up to 12 inches of concrete) and it will tell you if there’s anyone there by detecting movements ‘as small as breathing’. Think of this as the UAV from CoD4 – turn it on and suddenly you know where everyone is in the form of a radar blip. It’s also pretty handy for finding people hiding in secret passages and the like.

It’s meant to be for safely moving through buildings, but it seems pretty obvious what the real use is – checking if you’re at home or not. By the sounds of things, the only way to hide from it is to stop moving and hold your breath, and there’s only so long you can do that for. Good luck trying though. 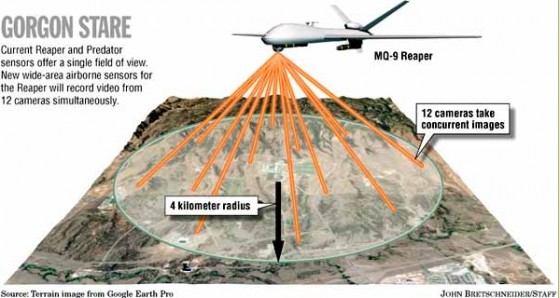 GODDAMN THE LACK OF LASERS!

Probably the most badass name ever given to a military project, Gorgon Stare involves 12 very powerful cameras providing a complete and uninterrupted picture of a 4-square-kilometre zone. The real advantage is that each of the 12 cameras can be operated either individually or as a whole to form a much bigger picture. This means if 12 people jump out a minivan and all run in different directions, Gorgon Stare can track each of them individually.

All this surveillance stuff takes up a bit of space, but it isn’t too heavy, meaning the same drone also has space for some weapons (Sadly not of the laser variety though). There is also a similar project known as Argus, which has a somewhat less impressive name, but an absolutely more impressive camera array. Featuring a ridiculous 92 cameras, Argus can cover a 40-square-kilometre zone in very high-resolution. In short, it can tell you have a bald spot, and it can see you dyed your hair. It also has the standard array of night vision and thermal sensors, so forget using darkness as cover. However, it still can’t see inside buildings, and that radar scope requires someone to get up close and personal. If only there was another way…

We still feel lasers ought to be involved here somewhere

This is probably the least interesting name for a military project ever. Perhaps that’s deliberate though, to throw people off its scent. The purpose if the IMD is to, well, map the interior of buildings. No prizes for originality there. Its pretty remarkable though – a few sensors here and there and military planners can have a complete blueprint of your house, including basements, alcoves, doorways and the thickness of your walls. They might have been better off just going to City Hall, but hey, nobody likes to stand in line. Its claimed that it wont be necessary to get within 10m of the target building (which can be up to 10 stories, and 2 basement levels, so you can forget using an escape tunnel when the feds come a knocking), and operatives can just leave a few sensors in innocent looking bags, or pizza boxes before disappearing out the way. Gone are the days of flower delivery vans parking opposite your driveway for days on end.

How does it work? Well, uh, we don’t know. Nobody does really. The most likely theory seems to involve sending out “echoes” from pipes or electrical wiring within the building, or as DARPA puts it:

“Stimulus response of building infrastructure contains tactically useful information on the interior structure. Infrastructure includes, but is not limited to, the structural, electrical, plumbing, and ventilation systems”

Ah well – even with the radar scope they wont know where you are exactly. You can still have the element of surprise if you jump out on them – blow a wall down maybe? Oh they thought of that too…

Holy shit, the crazy guy with the tinfoil hat was right! Well, yes and no. The device does sort of read minds – just not yours. It scans for brain activity in the same way thermal goggles pick up heat, in that the user will see a visual representation of it through the goggles. The next step is where it gets interesting.

The operator will train the system to recognize their brain activity in the event of a threat, which means when actually deployed, the goggles will know if your little monkey brain is concerned or not. But that’s pointless – you know what’s a threat and what isn’t anyway. The difference here is that the goggles will know before you do. The theory is that the subconscious mind picks up on threats before the conscious mind can process them. What the goggles do is tap into the users head and bypass the ‘inhibitory reactions’ – that pesky reflex that stops you from acting impulsively – by ‘reading’ their subconscious. In essence, that means if something were to surprise you, rather than go through the normal checklist of “Is this going to hurt me? Can I stop this hurting me?” your brain (courtesy of the goggles) skips straight to the “Arghh! Kill it!” stage. So to go back to the idea of jumping out of a hiding place, if you were to do that, the guy wearing these would shoot your sorry ass before he even had time to be surprised. Absolutely no chance of escape then? Nope.

So it would appear then that the Government has everything they need to follow you 24/7, without you ever knowing about it. But they probably aren’t doing that, right? Right? Best fetch the tinfoil just in case…