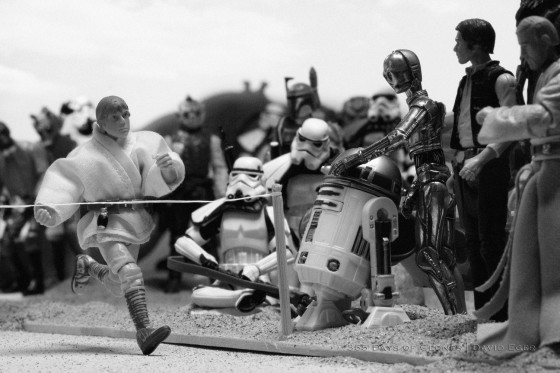 As you know, we’re fans of pop culture art projects, and David Eger is one of the kings of the genre. His 365 Days of Clones project is an amazing study of photography and persistence, which probably wore him out. As a follow-up to that series, David worked on something a bit less labor intensive in 2012 :

52 Weeks of Star Wars is a weekly photo project starring various characters from the Star Wars franchise. This photo project is a continuation of sorts to my original series; 365 Days of Clones, specially my Cloned Photos mini-series.

From his entire 52 image collection, we’ve selected 20 of our favorites to share with you below, but definitely click through for the full set and explanations of each. They feature movie posters, album covers, along with famous photos and paintings. See if you can identify all of the references below :