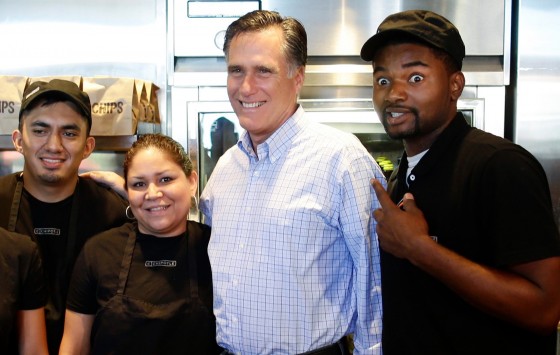 You’ve no doubt seen this photo of Mitt Romney at Chipotle around the Internet today. It seems Mitt Romney can’t even buy a burrito without looking awkward, and when someone suggested he pose with some of the 47%, it got infinitely worse. Honestly, who thought it was a good idea to have him pose with workers who he thinks should self deport, and who will vote for Obama no matter what? The contrast between this photo and the image of the Republican pizza parlor owner bear hugging President Obama cannot be overstated.

A few weeks ago we posted a collection of 60 Awesome Obama Photos, and felt to be fair we should give Mitt Romney a gallery too. The problem is, it’s pretty tough to find photos of Mitt Romney where he doesn’t look awkward. While Obama seemingly appears cool as a cucumber in every situation, Mitt Romney often looks like a robot wearing mom jeans. Sure, I’m a bit biased in this assessment, but even Republican talking heads on television often say that Mitt needs to be more human. This collection of photos shows Romney on the campaign trail, often times trying too hard to be a regular guy, terrorizing babies, making odd faces, and ever pandering to the electorate :