What Does a 60-Year-Old Tin of Lard Taste Like? 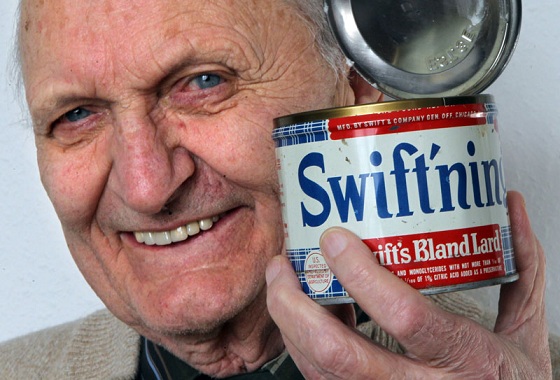 That up there is one very happy German, Hans Feldmeier is posed next to an empty tin of lard he’d just eaten, oh and he’d had it for 64 God damn years.

This raises a number of questions.

Well Mr. Feldmeier received the tin of lard in an aid package from America six decades ago, because if there was one thing American’s had a lot of back then, it was tinned animal fat. Upon opening what must have seemed like the world shittiest present, Hans swore to save that lard until he really, really needed it (code for he preferred starving to eating a tin of lard), then promptly forgot about it for 60 years. Fast forward those 60 years and Hans decided enough was enough and scarfed that bad boy down.

He of course had it tested by experts who claimed it to be tasteless, but edible, so all in all, just like the rest of American food. Burn! Oh wait.