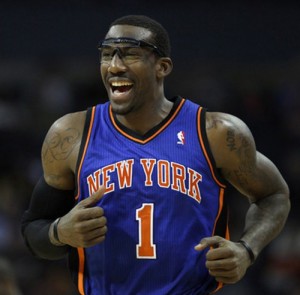 Amar’e Stoudemire is a professional basketball center and power forward for the New York Knicks. Taken in the first round with the ninth overall pick in the 2002 NBA Draft, he spent the first eight years of his career with the Phoenix Suns. Stoudemire won the NBA Rookie of the Year Award in 2003, made six appearances in the NBA All-Star Game, made first-team All-NBA in 2007, and won a Bronze Medal with the United States men’s national basketball team at the 2004 Olympic Games.

We recently had the chance to speak with Amar’e on the Gunaxin Sports Show. We discussed the NBA Finals, the Knicks, media in sports, Stoudemire’s Foundation, and him teaming up with Excedrin to promote the “What’s Your Headache?” Facebook contest. Amar’e went to meet Walt Arnett, winner of the Excedrin “What’s Your Headache?” Facebook contest, as the Lexington, Ky., native uses his customized prize package to get his charity off the ground. Walt won a customized headache relief packaged valued at $150,000. Arnett’s winning video, “All in My Headache,” was rewarded for its lighthearted approach to tell the story of his everyday life headaches, featuring a song he wrote and performed. You can enter the contest at the Excedrin Facebook page. Check out Amar’e Stoudemire’s answers to the Gunaxin 6Q below, and the full interview on the latest episode of Gunaxin Sports Show.